I’m sure we can all agree that food is one of the things in life that brings people together. Nothing beats bonding with your friends over a no-frills, laid back session of mookata. 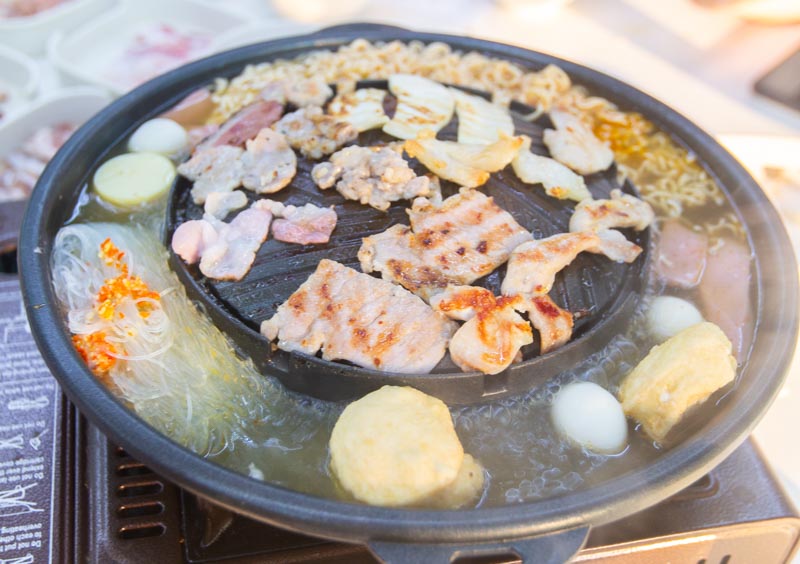 If you’re not familiar with the mookata scene, I don’t blame you, since I was late to the game myself. Mookata, which is a Thai word, translates to “pork” and “skillet”, which is essentially an experience of grilling your meats or enjoying it hotpot style. Imagine a combination of steamboat and Korean barbeque, which are two of my favourite types of meal.

From cheese to charcoal mookata, there is something for everyone. But with so many mookata places scattered around Singapore, which one do you choose? Well, we asked, and you answered. Here’s a recount of our feasts at these top two suggestions. Ask any mookata-lover if they’ve heard about Bangkok Street Mookata, and they’ll probably say yes. Possibly one of the most popular mookata spots, they have branches spanning from the West to the East.

I took a trip down to the outlet at 498 Jurong West St 41, since it was the most convenient option for me. Taking a step into the coffee shop where it is located at felt like home, because this was where my friends introduced me to my very first mookata experience.

On a typical weekday or weekend during the night, the place is mostly buzzing with people, but you usually can still snag a table or two. 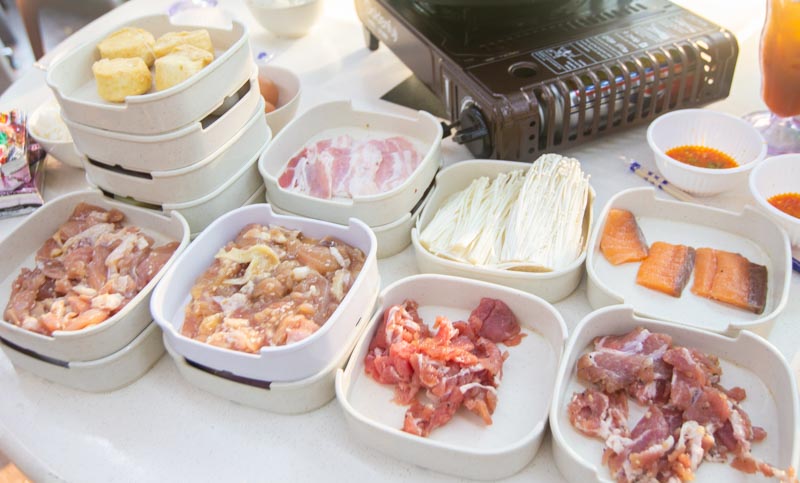 You know how you have that urge to order everything off the menu? Well, under the watchful eyes of my dining companions, I managed to resist the temptations and stick with an acceptable portion of items.

As with any mookata place, Bangkok Street Mookata offers your typical selection of meats like pork, chicken and beef, as well as assorted vegetables including mushrooms and cabbage. They also provide seafood along with side options like hotdog, tofu, eggs, tang hoon (thin glass noodles), maggie mee and rice. For our meats, we settled on a variety of pork belly, pork collar (original and garlic), streaky pork bacon and chicken (marinated and garlic). 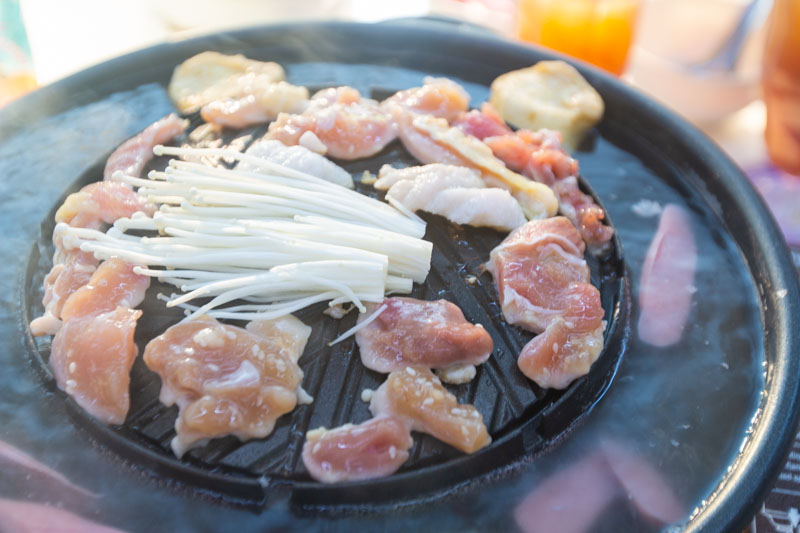 A minuscule thing to notice, but I appreciate how each pot comes with pork lard pieces, which really helps to grease up the skillet for an easier, non-stick grilling experience.

There is also a station near the store, where you can help yourself to free-flow jugs of the soup, which saves the hassle of having to get the staffs’ attention each time you need a refill. Each serving of pork belly, collar, streaky bacon and marinated chicken costs S$1.90, which is the usual average pricing for mookata items.

But I have to say, the portion is pretty little, and I’ll recommend on doubling up if you’re sharing it with a group of friends. 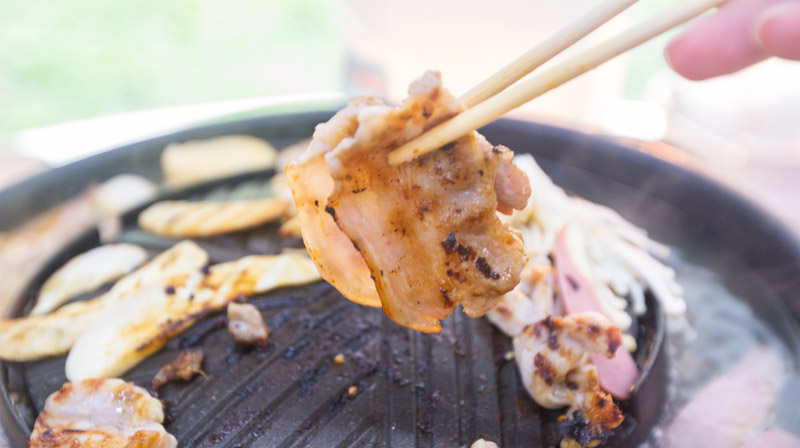 I liked that the pork had in general a good fat to meat ratio, because I enjoy having a chunk of meat to bite into, to complement some greasy fattiness.

The meat was also tender, and when charred slightly from the grill, had a nice smokiness to it. 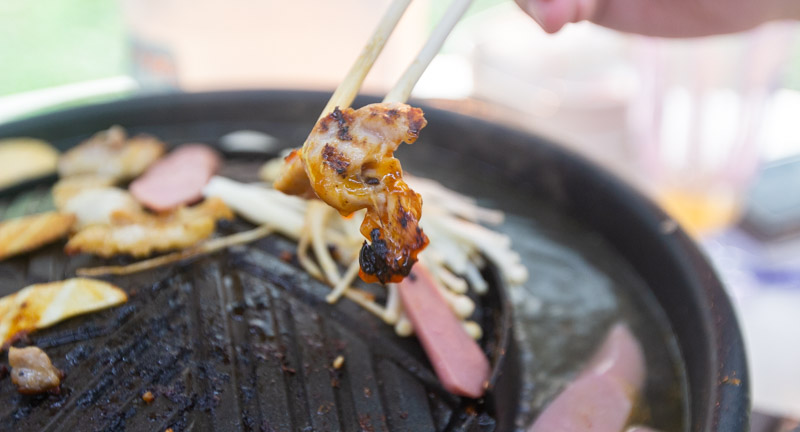 We also got the marinated and garlic-flavoured chicken to try, and they were meaty with a nice amount of fat. And because they were already marinated, there was a savoury flavour to them, so there wasn’t much need for any sauces.

It didn’t hurt to add some sweet and sour chilli for a spicy kick though. As with any seafood, their salmon is a little pricier at S$3.20 per portion for four slices.

Each piece is a decent thickness though, and did not have a strong fishy taste. While this isn’t the most worth-it item to order, I wouldn’t mind getting it occasionally for when my seafood craving hits. 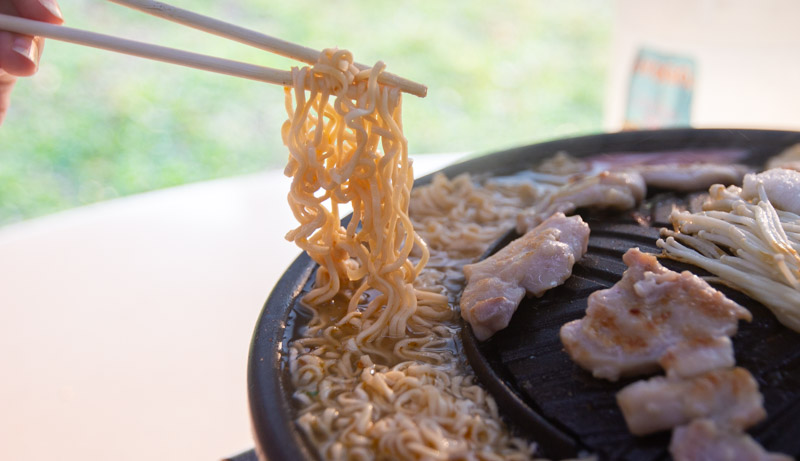 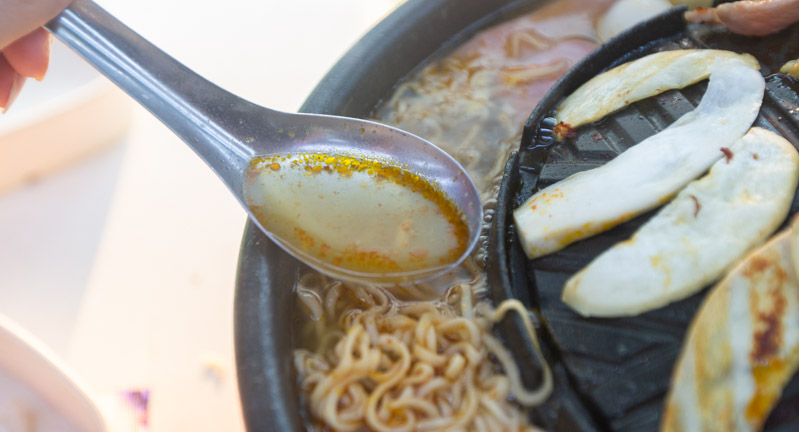 I loved how I not only got to slurp up some hot, piping noodles, but the soup also became much more flavourful from the tom yum seasoning. 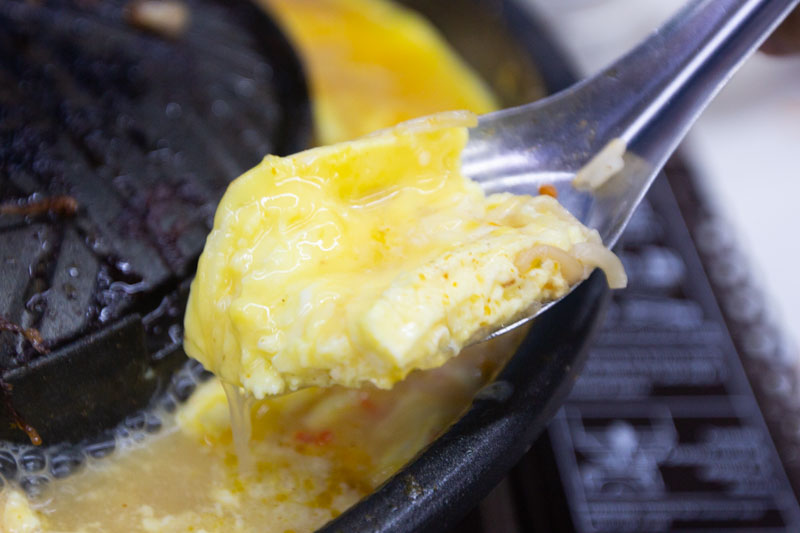 Now, all that’s left was to crack an egg (S$0.60) or two into the soup. After a few minutes of cooking, it formed a nice, fluffy omelette. What an egg-cellent  way to end off our meal!

Our bill totalled up to around S$50 inclusive of GST, which I think is a pretty decent amount for three pax, and our stomachs were full and happy. If you’re afraid of busting your budget from getting a la carte items, you can also opt for their platters for two (S$22) or four people (S$39). 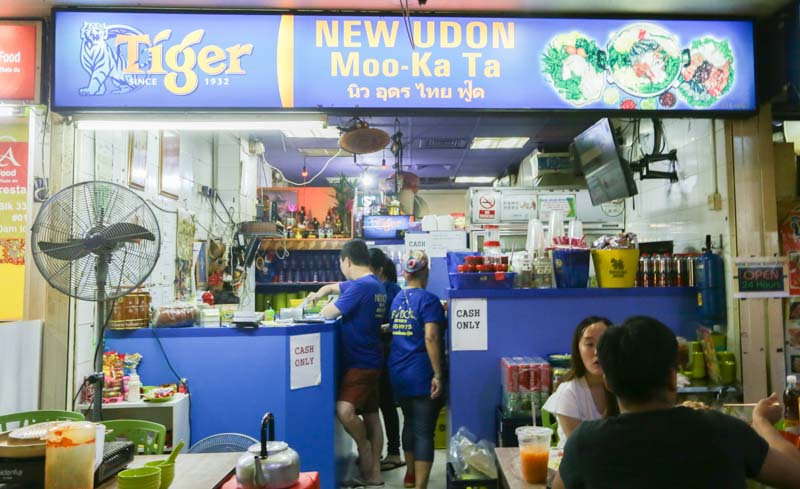 Unlike Bangkok Street Mookata, New Udon Thai Food is air-conditioned, so you won’t have to worry about sweating up a storm. The space is definitely much smaller though, and since it can get quite packed, it might be tougher to find a seat during peak hours. 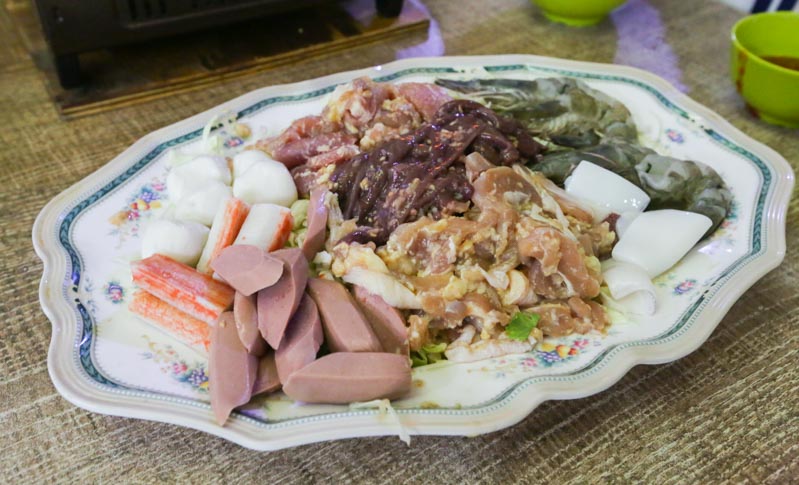 The moment we sat down, we were approached by the staff, who asked us if we consumed pork liver. I responded positively, and before we knew it, a fixed platter was served to us.

I thought that was odd, and after a quick Google, it seemed like this was how they typically operated. It wasn’t a huge deal, but I think some people might not appreciate having their orders decided for them, so this is just a heads up. 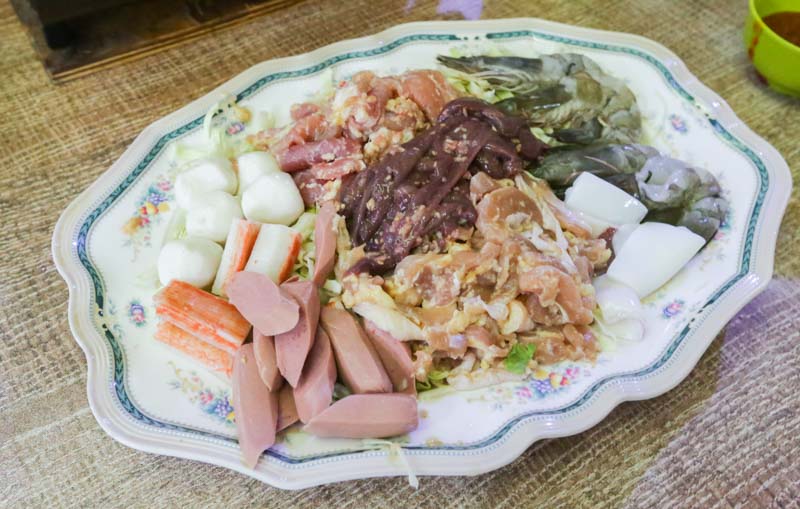 The platter was tailored for my two dining companions and I, and cost S$45. It came with a selection of crabmeat, hotdog, fishball, pork slices, pork liver, chicken, prawns and squid.

A side of vegetables like enoki mushrooms, cabbage, puk choy (Chinese cabbage) and kang kong (Chinese Spinach) were also included. Similar to Bangkok Street Mookata, this place also operates with a gas stove, and provides you with pork lard to oil up your skillet. 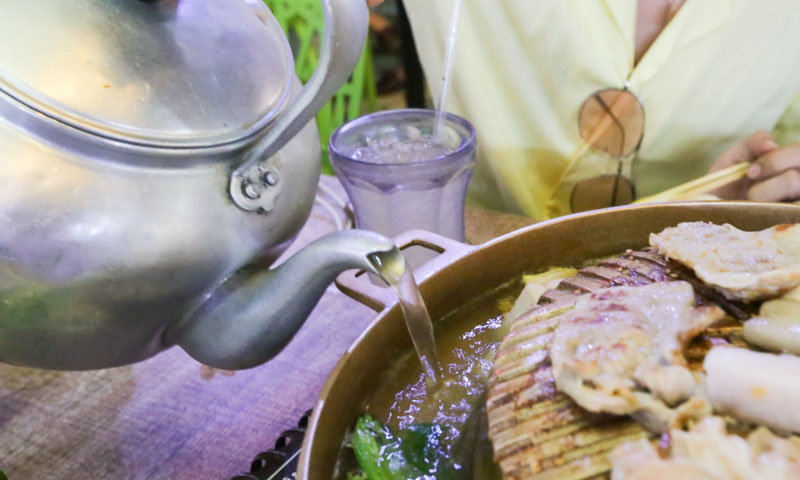 Each table gets a kettle of soup for refills, so the convenience box is checked here too. 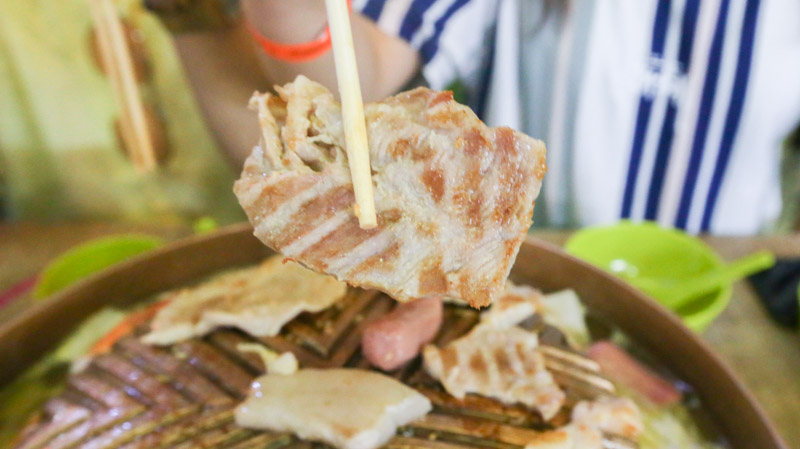 The sliced pork here comes in roughly the same size as the ones from Bangkok Street Mookata, and are equally tender but with a bite to it.

I noticed that the grill marks on the meat are slightly thicker here, due to the design of the skillet surface. I don’t detect much difference taste-wise, but I suppose it gives you a more obvious sear on the meat. I enjoyed that the chicken was meaty, with a little fat for some juiciness.

The sweet and sour chilli here is a bit different, and is thicker and darker in color. Since the meat alone can be a little bland, dipping it in some sauce can add a tangy flavour. 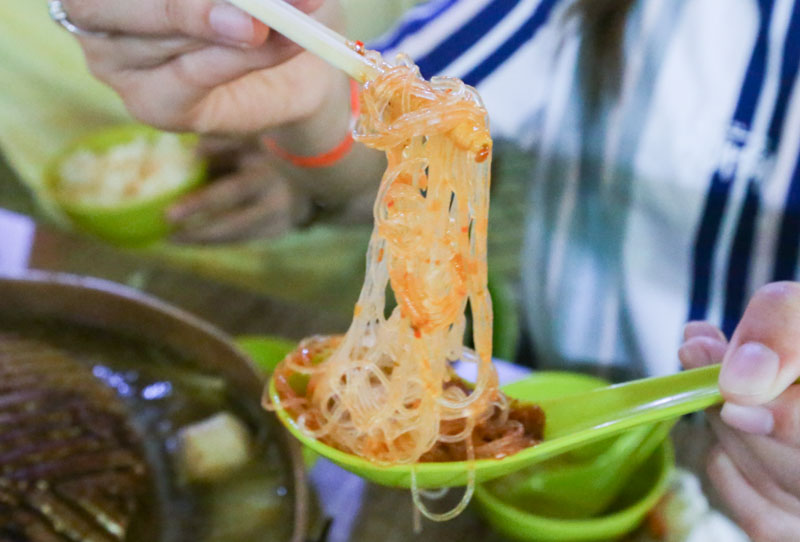 I don’t usually get tang hoon because I find them to be a tad plain, but my friend introduced me to a ‘life hack’, which involved adding a dash of the chilli to the noodles for an instant kick of spice. 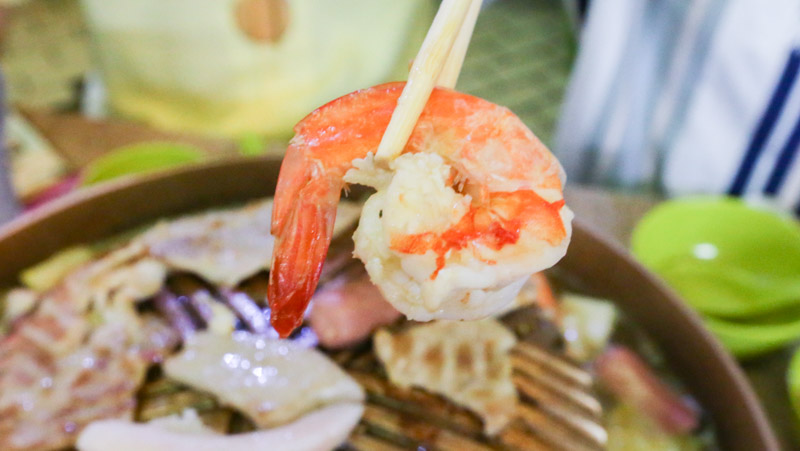 The prawns were pretty huge, and came de-shelled, which I really appreciated. The meat was also fresh and chewy. Definitely an unexpected plus point for quality seafood. I especially loved how they kept the prawn heads on, because throwing them into the soup really helped to add a rich savoriness to the otherwise fairly bland broth. Another pro tip: sprinkle some of the vegetables in the broth too for a nice, herbaceous flavour. I just wished I had discovered this at the start of our meal!

Apart from the surprise platter at the start, I had a filling and satisfied experience at New Udon Thai Food. The platter was decently sufficient for three people, and for a similar price of S$45, had roughly the same amount of items when compared with Bangkok Street Mookata.

With the two mookata places having fared similarly in price, food quality and portions, I’d have to go with Bangkok Street Mookata as my preferred choice, simply because it has more branches. Seems like convenience has won this round.

Do you have a mookata place that you absolutely love and frequent? Share some of your recommendations with us!

Previous articleBid Farewell To Gudetama Cafe Singapore With 33% OFF From Now Till 17 Nov
Next articleApollo Fresh Cockle Fried Kway Teow, Marine Parade: “Not only unique but downright delicious” Enjoy Your Childhood White Rabbit Candy In A Bubble Tea For...