Muse Amuse: Dine On Exquisite Modern-Asian Food In This Restaurant-and-Bar Concept By The Carbon Collective At Southbridge Road Cozily nestled within a shophouse, we paid a visit during lunch hour to try the new menu, which changes every quarterly. 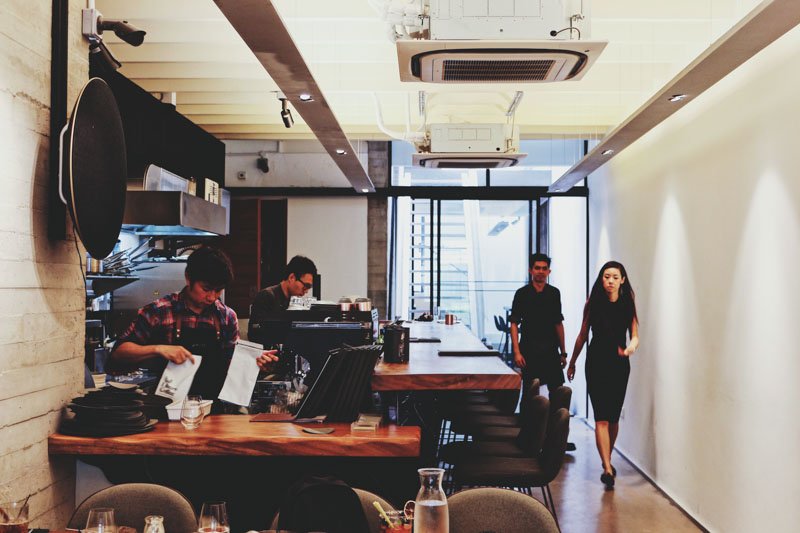 The space seats up to 30 pax, and was furnished minimally with clean white walls, wooden tables and grey cushioned chairs. We later learnt that the interior is kept simple for a reason — it is used as a backdrop for artists to display their artworks. 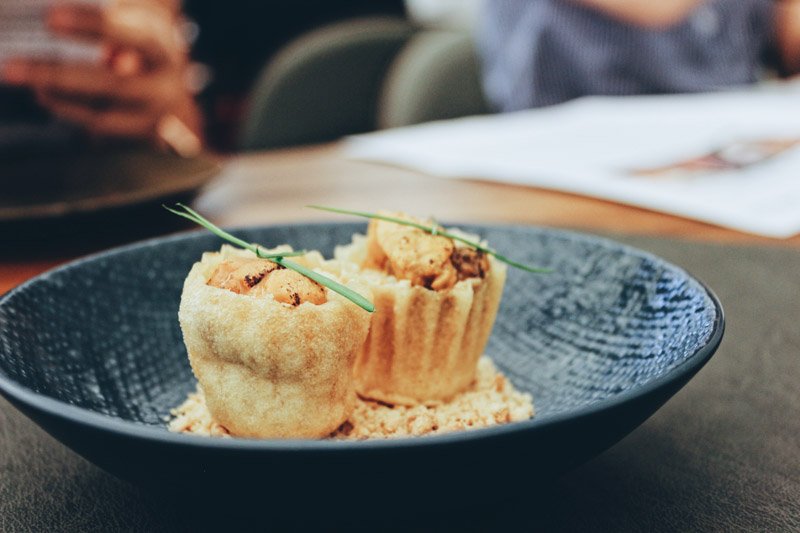 We started off with the Uni Pie Tee ($15 for 2 pieces). The humble kueh pie tee was spruced up with the addition of fresh Hokkaido sea urchin, placed on top of rice flour shells that are made in-house.

We recommend putting some crumbled nuts on top of each pie tee for added crunchiness. 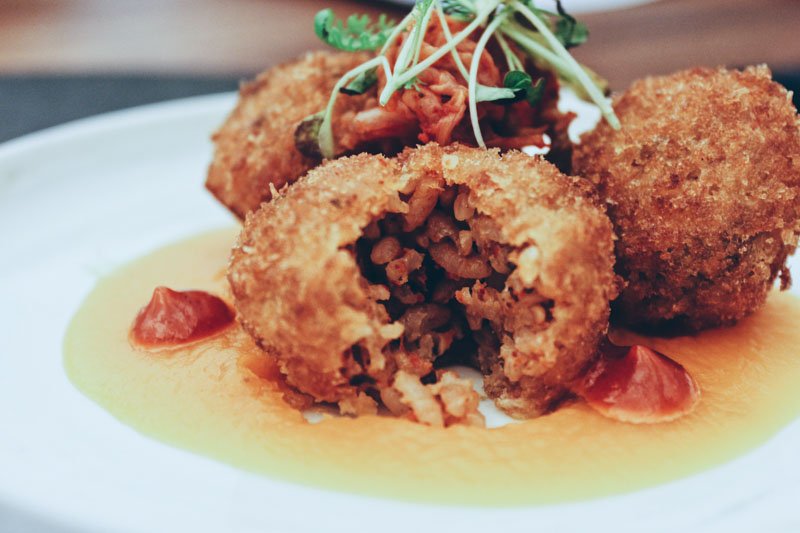 Next up, we tried the Golden Kibun ($15), a Korean-Italian fusion of fragrant kimchi risotto, rolled into bite-sized balls with a crunchy panko crust.

The creamy butternut squash puree gave this dish an added sweetness, whereas the small blobs of Korean gochujang (red pepper sauce) also provided a different flavour profile as well as some colour contrast. The Tartaro ($18) is Muse’s version of steak tartare, which is a hand-chopped 200-day grain-fed Wagyu tossed in sesame oil, layered under diced Korean honey pear. And of course, a single raw egg yolk to top it all off.

The pear gave a lovely crunch and texture which artfully complemented the chewiness of the beef, which was absolutely fresh. 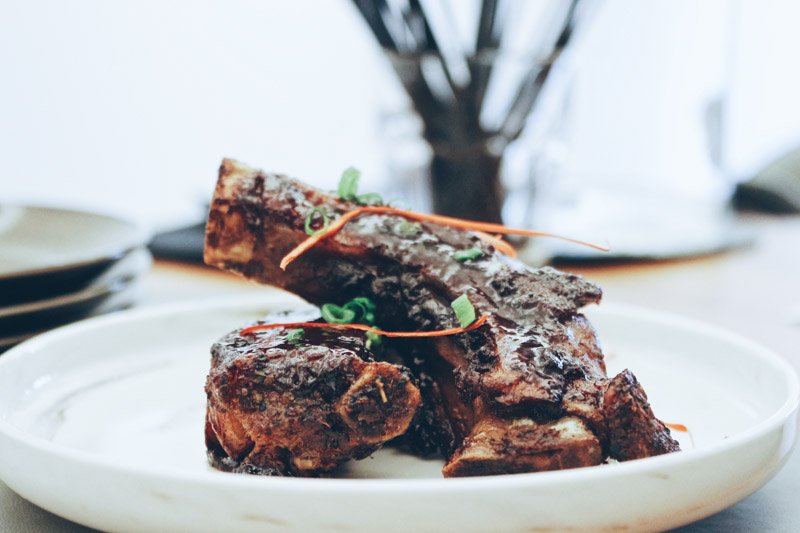 The 6-day Baby Back Pork Ribs ($16) was also another crowd favourite — the meat was falling off the bone as I picked the ribs up with my chopsticks! Twice-marinated for a total of six days, this loin ribs will be the best you’ve ever had. 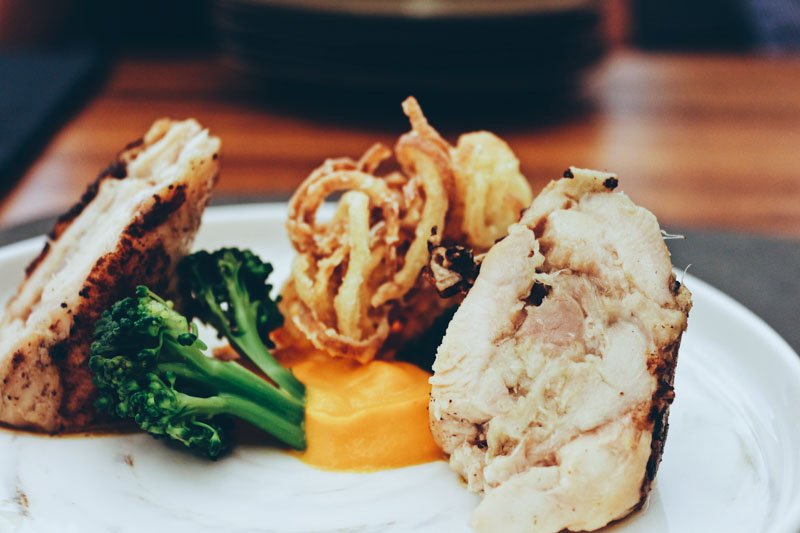 The Chicken Roulade ($15) features a sous vide chicken thigh that was tender and perfectly cooked, with strong black pepper flavours. Served at the side, the fried potato strips provided a nice crunch. Also, the bright yellow cauliflower puree was smooth and complemented the chicken. 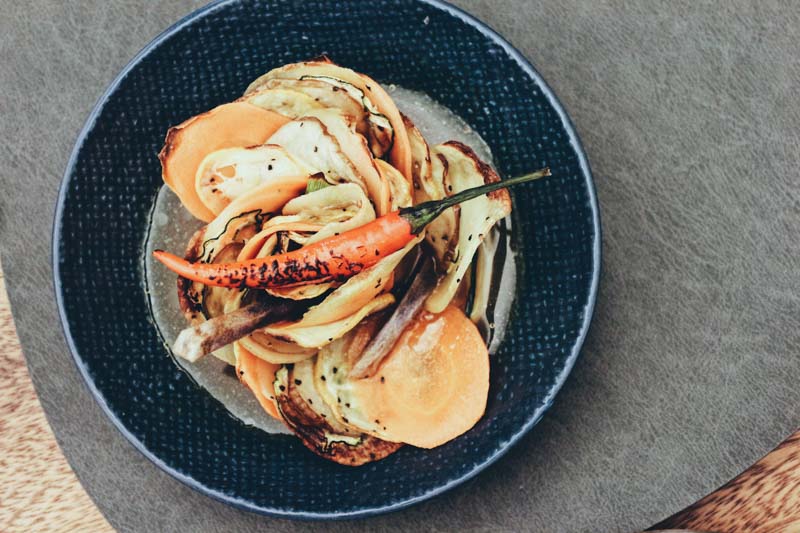 We then had the Royal Ratchaphruek ($12), one of the most beautifully plated dishes that were presented to us. This was Muse’s version of an Asian ratatouille created with thinly sliced carrot, potato, lotus root and zucchini.

Steeped in homemade tom yum broth, we enjoyed the spicy and tangy vegetables. I personally feel this would whet your appetite to want to have more dishes! 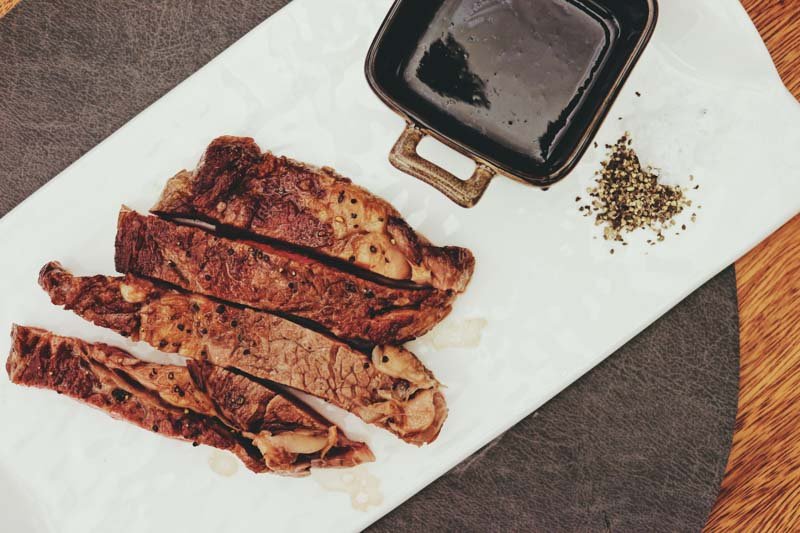 The highlight of our meal came next — the Aurora USDA Prime Beef Angus Ribeye ($78), which we had half of. The ribeyewas imported Illinois too. 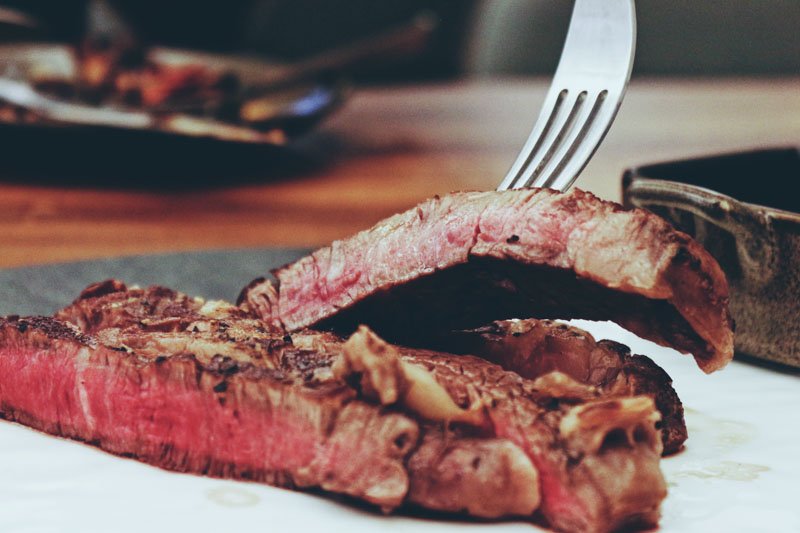 First sous vide then grilled to medium rare, the ribeye was so tender and seared to perfection with a nice amount of fat. The Thai basil dipping sauce also added a tangy and fragrant kick. 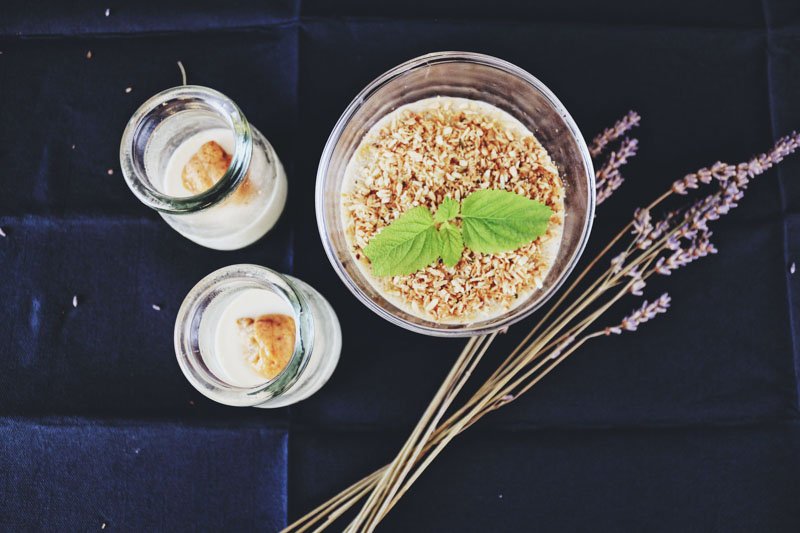 Who could ever resist a good dessert? In this case, we even had two. The Gula Melaka Panna Cotta with Umami Sea Urchin ($12) was served in a mini glass bottle.

The salty and savoury sea urchin paired with the sweet and smooth pudding might sound off-putting to some, but it was one of my personal favourites as it tasted out of the norm. 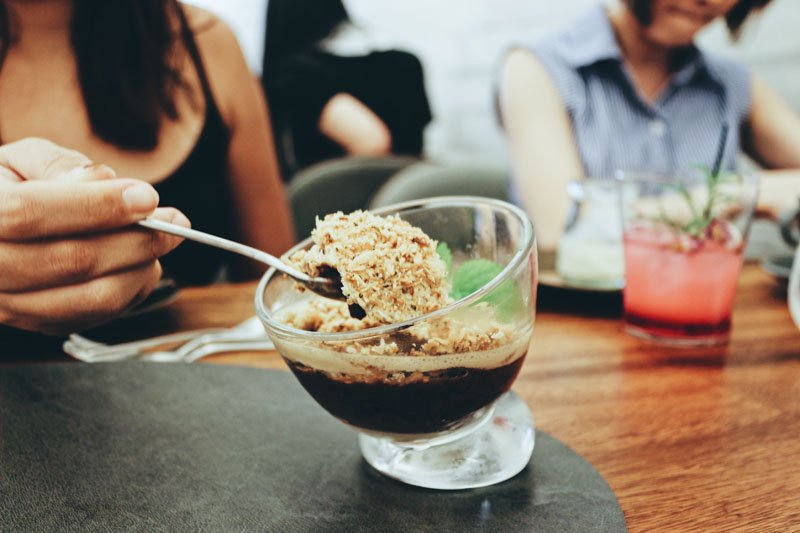 For the next dessert, we had the Slow-Cooked Black Glutinous Rice ($8), an atas version of the local pulut hitam. The desiccated coconut sprinkled atop gave a different texture to the dessert.

The black glutinous rice wasn’t too sweet, and we polished this dessert within minutes. 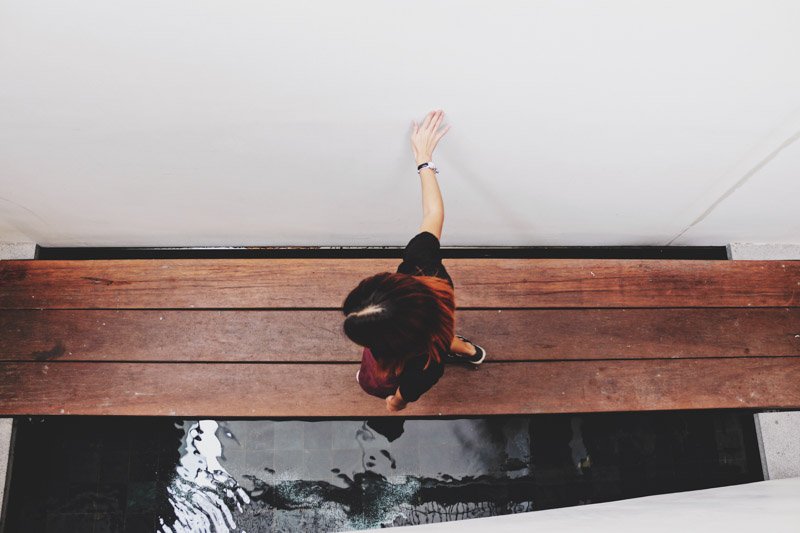 After desserts, we took a tour of the place. Separated by this simple yet elegant air-well and water feature was Amuse, a bar area that can sit about 10 pax or so. We were then treated to some of the signature cocktails. 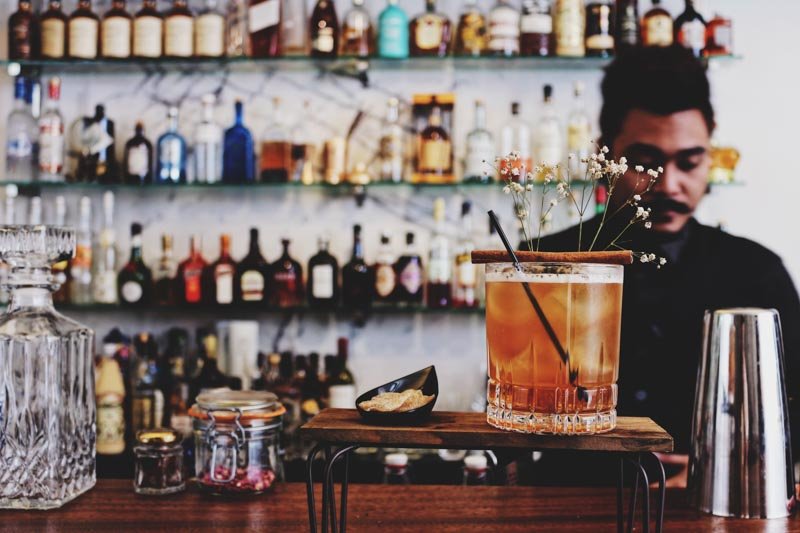 We greatly enjoyed the Teh Halia Earl Grey with Gingered Candy ($25), professionally concocted in front of us. The mixture of ginger cognac, chilled earl grey tea and Cointreau Chamomile liqueur came with a kick. You can also swirl in the cinnamon stick for an added touch of sweetness.

Garnished with baby’s breath, we agreed this drink would look the most insta-worthy. We assure you the cocktail tastes equally amazing as well. The Bandung Blush ($25) and Tom Yum Bloody Mary ($25) were also craftily prepared for us, but in mocktail versions as we requested.

We specially enjoyed the Tom Yum Bloody Mary, a local version of the ever-popular cocktail, made with real tom yum broth. It was indeed yum(s), with a refreshing drink that we could not stop sipping on. The second level of the establishment is a rooftop garden where they grow their own herbs such as apple mint, sweet basil and mustard leaves that are use in the dishes and cocktails.

Muse’s dining concept emphasises on sharing, which is why the chefs choose to present their modern Asian food in small plates. Come on down to Muse today to try their exquisitely-prepared food, or pay a visit to Amuse for their inventive cocktails.

Previous articleSunday Roast On Royal Albatross: Feast On Traditional British Sunday Roast On Board A Ship Near Sentosa
Next articleSeoi Gor Cafe 水哥冰室: Get Your Dose Of HK Scrambled Eggs On Toast At This Mini Cha Chaan Teng Hidden In Holland Drive