I’ve been a Toa Payoh kid my whole life. Known to be a silver zone, it’s a bold decision for cafes to set up here. With Creamier as the only outlier with a constant queue, most of us have overlooked Niche Savoureuse, the cafe just beside it.

I have always been intrigued by Niche Savoureuse, which has been here for as long as I can remember. They must be doing something right to be able to survive. One day, I made the spontaneous decision to try them out. And boy, that was one of the best foodie decisions I’ve made to date.

Their storefront stood out from the others, with a very simple vintage design. From the wooden furniture to the open-window concept and golden foiling, their aesthetic makes for a picturesque cafe. 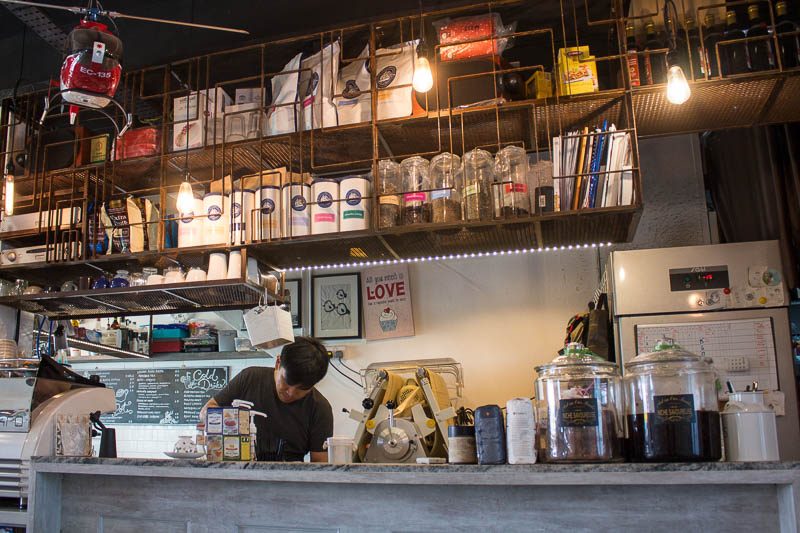 As I went in, I was greeted by a whiff of the alluring aroma that is signature of fresh bakes and freshly brewed coffee. I was enveloped in its warm and cosy ambience, with a similar quaint setup on the interior. The playlist of the 1940 and 1950 classics that was casting in the background further enhanced its nostalgic vibe. 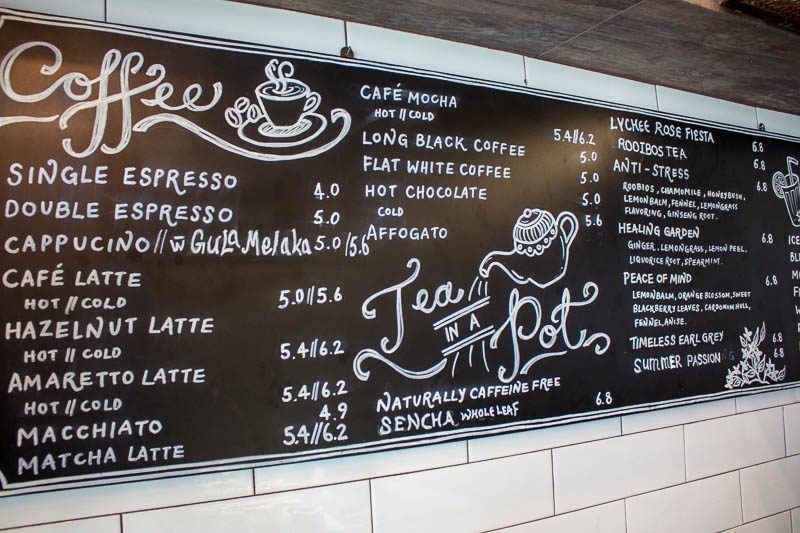 I had the opportunity to speak to the owner, Melvin, who told me he designed everything in the cafe by himself. He learned how to use online editing tools and sourced for his own materials, which I thought was pretty impressive. Not only is their decor made from scratch, but all their bakes are made in-house as well!

He humbly told me that their cakes and bread are served on a rotational basis to ensure only the freshest ingredients are used for their foods. The menu wasn’t the most extensive, with mostly all-day brunch-style items with some pasta and pizza choices thrown in the mix, on top of the bakes displayed at the counters. 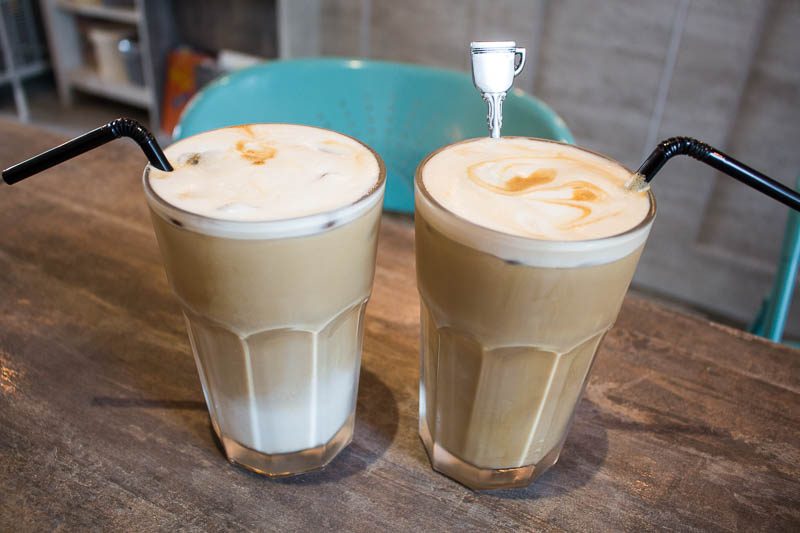 We decided to get some coffee to sip on as an accompaniment to our food. My dining partner got an Iced Caffe Latte (S$5.60) whilst I decided to get something unique and got the Iced Amaretto Latte (S$6.20). The base of the coffee was the same; a local roast that wasn’t too acidic.

I liked its full-bodied profile, although the addition of Amaretto didn’t quite suit my preferences. It wasn’t overly sweet with a distinct taste of nutty almond paste and a tinge of cherry undertones. 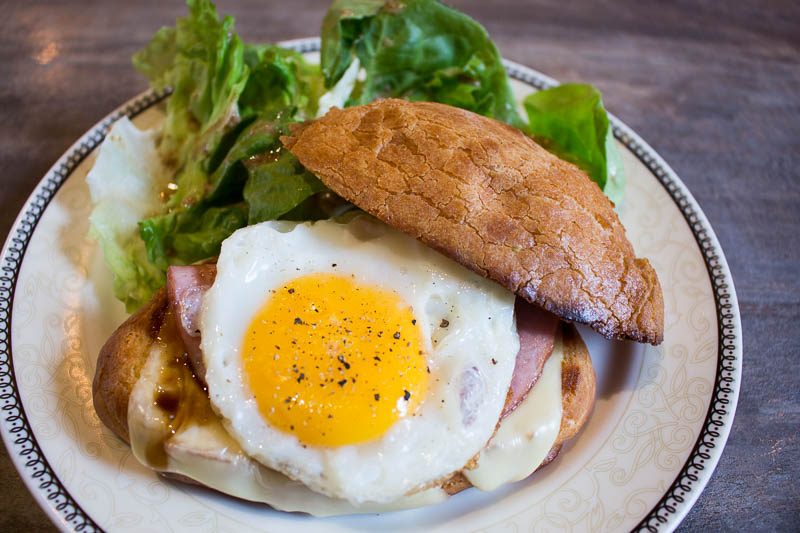 The first dish that we got was the Niche C.H.E (Cheese, Ham & Egg) (S$10.90), paired with their house-made ‘tiger bread’. As it arrived on our table, the fragrance of the ambrosial bread made my mouth water. It smelled as good as it looked, layered generously with the said ingredients. Fresh greens drizzled with sesame sauce was served on the side too, which made it a wholesome meal. 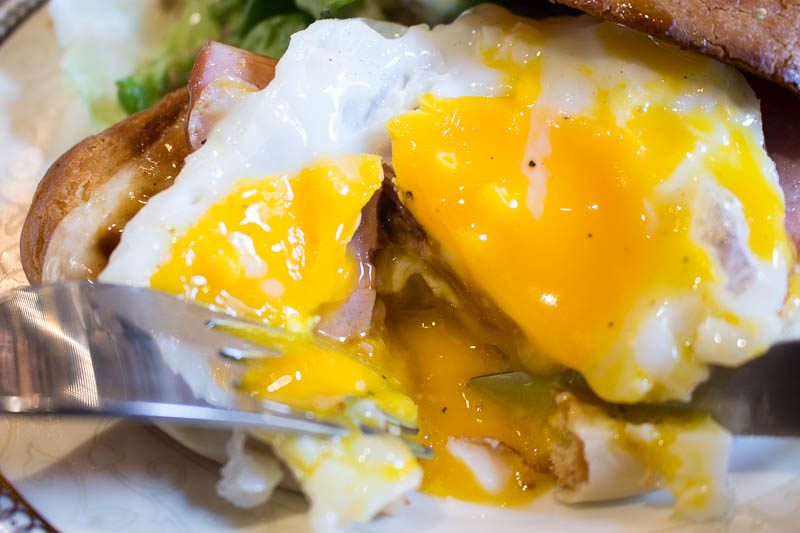 As I sliced through the yolk, I was pleased that it had that optimal oozy consistency in the centre. The slice of molten cheese melted nicely to enrobe the bottom piece of bread. Topped off with a thick cut of ham, this combination was absolutely delightful. The barbecue sauce also added a dimension of sweetness and smokiness to the dish. 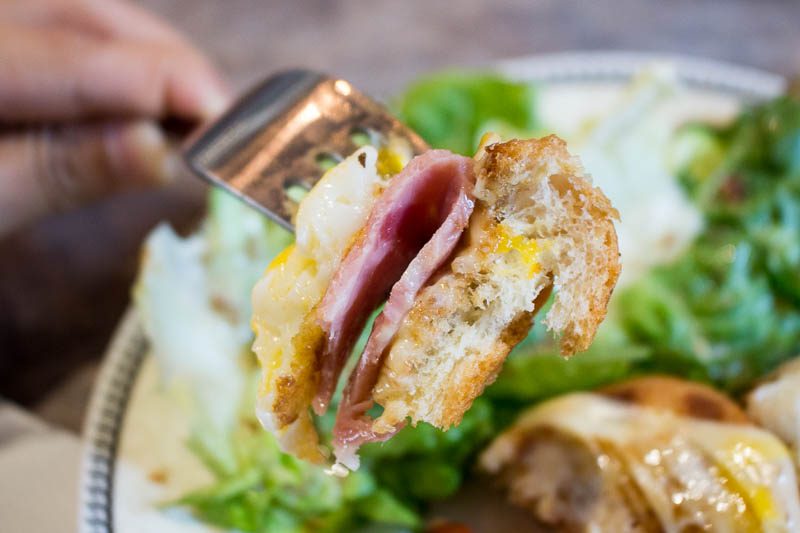 I had to take a bite of everything together at once, and it did not let me down. It was an umami explosion in my mouth, with dominant savoury flavours topped off with pockets of sweetness and creaminess from the various components. 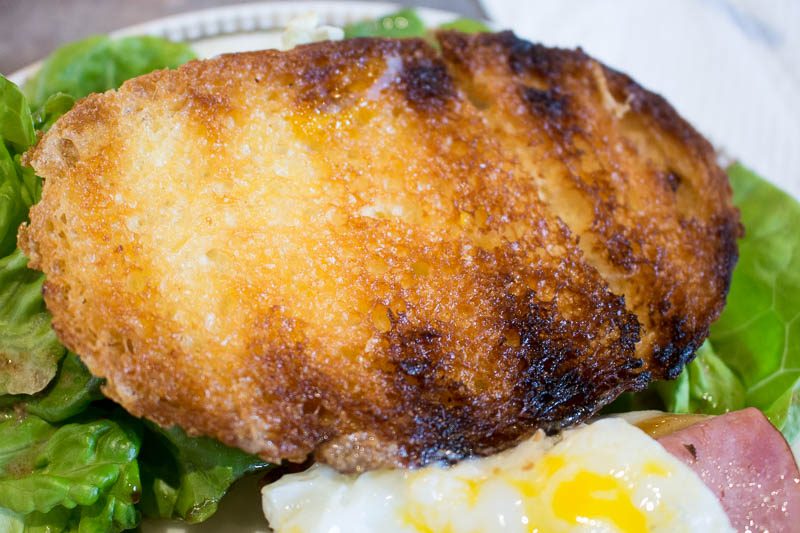 The highlight was definitely the ‘tiger bread’. I was amazed at how crusty the top was, toasted to perfection with just the right amount of char. They were well buttered too, with a springy and fluffy centre that soaked up all the flavours like a sponge. The pillowy centre was to-die-for, so tasty even on its own. When I had nothing but praises for it, Melvin mentioned that all their bread is naturally yeasted, which gives the bread more flavour. 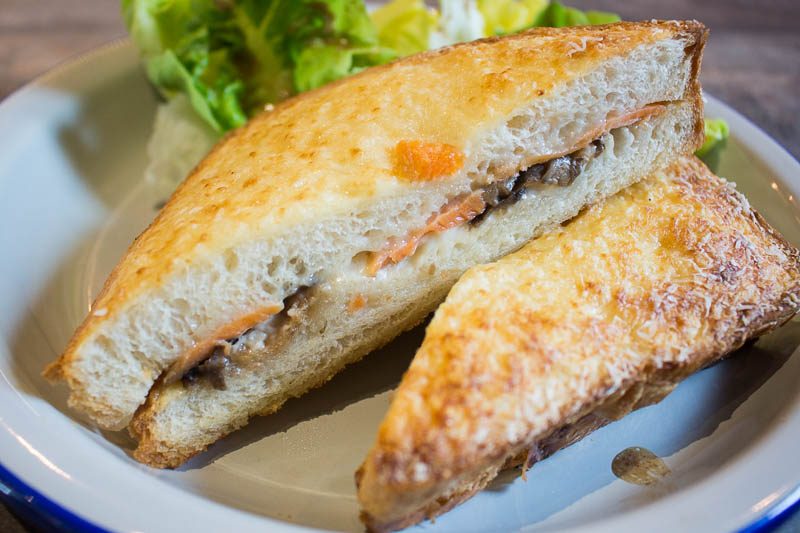 We also got the Niche Croque Monsieur (S$8.50), which was really worth it in my opinion. There were three options of protein: Honey Baked Ham, Spicy Tuna and House Cured Salmon, of which I decided to go for the salmon option.

The handmade Pullman bread had a delicate airy texture to it, with huge air pockets that attributed to its softness. Topped off with Swiss gruyere cheese, I liked that the cheese was buttery smooth with a nutty and savoury flavour.

It was distinct but did not overpower the dish. Instead, it complemented the house-cured salmon that was flakey and tender. Not only did they pack a generous amount of fish, but it also tasted clean and neutral with just a touch of saltiness. The mushrooms added notes of earthiness, and the white sauce gave just the right amount of creaminess to bind the entire dish together without being jelak. 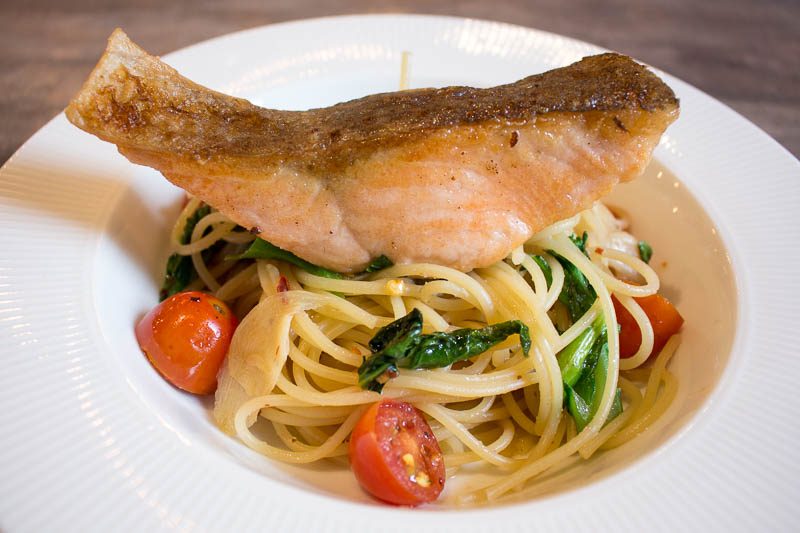 We also decided to get their Norweigan Salmon Aglio Olio (S$13.90), which was served with a huge slab of salmon sitting atop a bed of garlic-infused pasta. 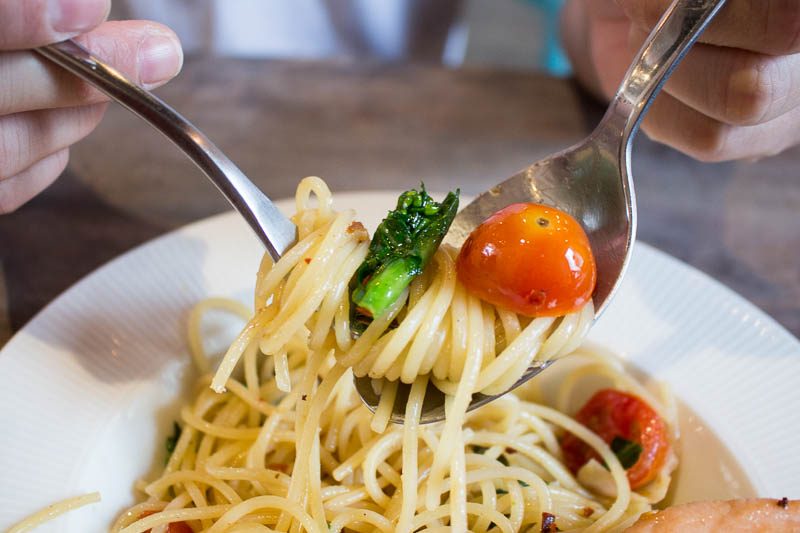 The pasta looked unassuming, but it was perfectly al dente. It was packed full of flavour, well-seasoned with a garlicky fragrance and just a hint of spice. I liked that it had the perfect balance of smoothness without being overly oily. The touch of cherry tomatoes, wilted greens and caramelised onions added a pop of colour and sweetness. 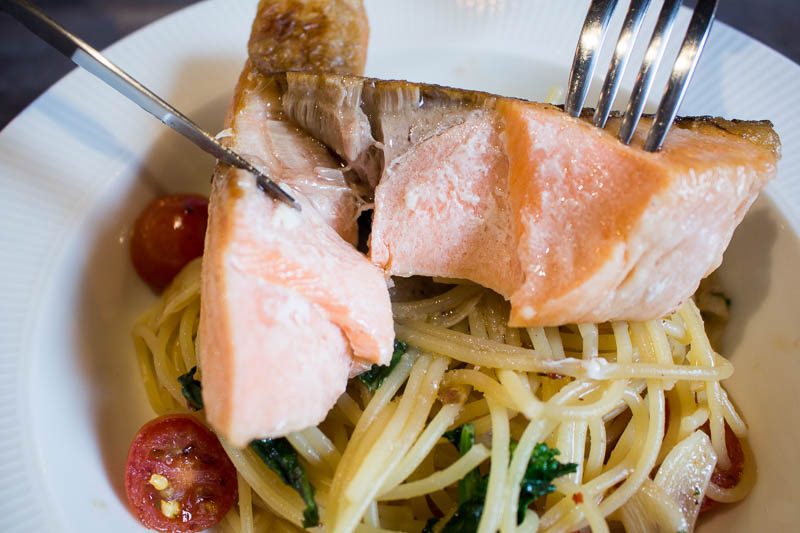 The salmon itself was delightful, cooked just the way I like it. It had a nice pink centre and was melt-in-the-mouth tender. I could taste the freshness of the fish, which was mildly flavoured with sweet undertones. 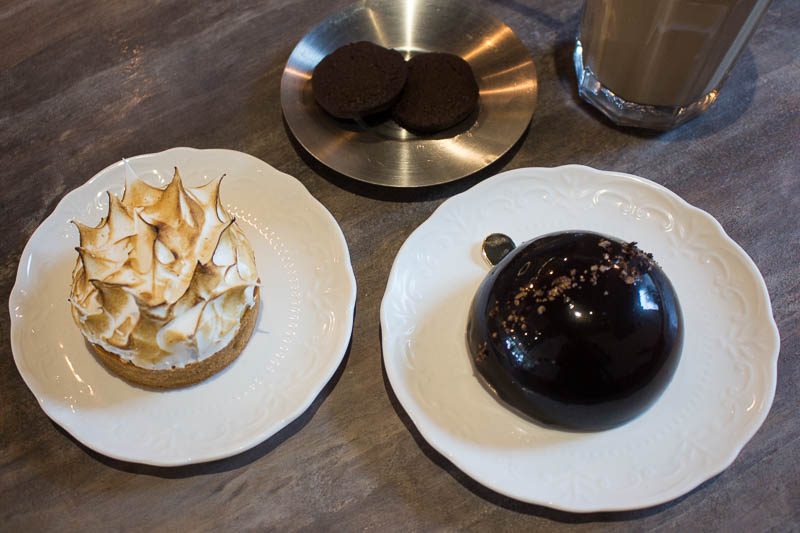 As Niche Savoureuse are well-known for their desserts, I had to try some of them. Especially after tasting the amazing mains, I set high standards for their desserts. I got a Lemon Meringue Tarte (S$5.90) and Black Diamond (S$6.90), and both did not disappoint. 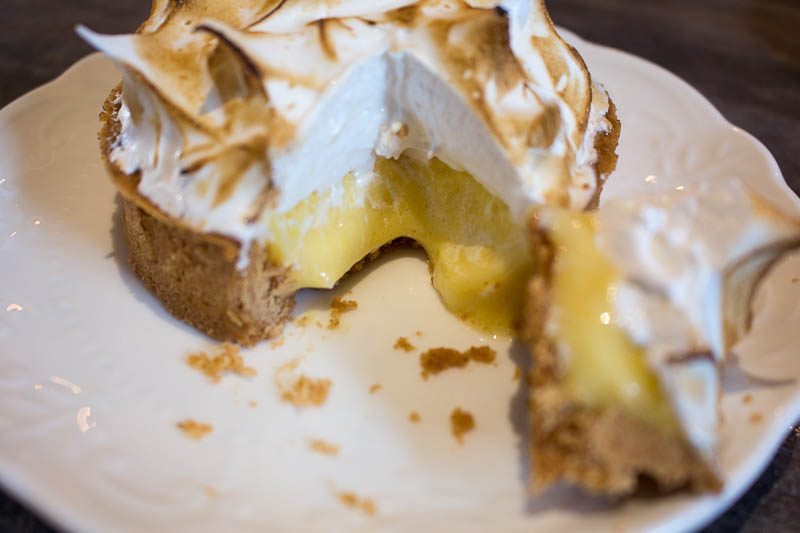 This is one of my favourite desserts ever, so trust me when I say I have had a lot of lemon meringue tarts. There is a fine line between a mediocre and delicious one, and I’m glad to say this fell on the latter end. The three components each have their own strikingly different flavour profile, but they blended together harmoniously. 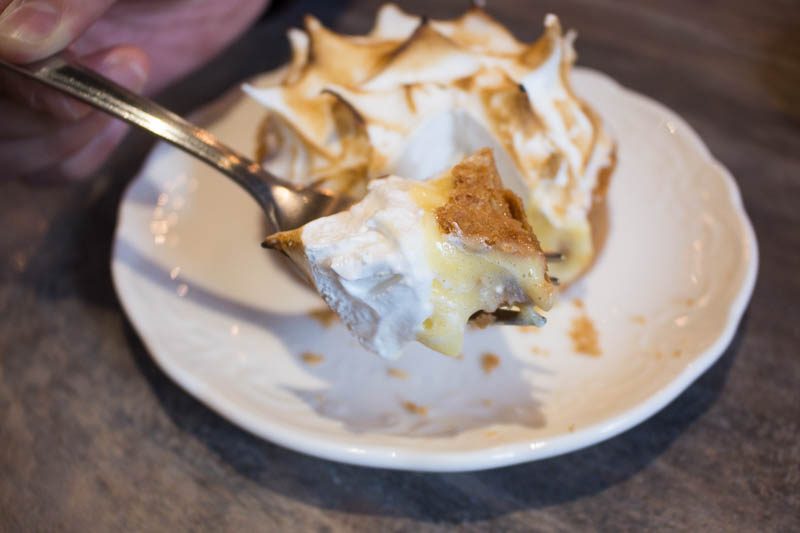 The tart itself had a biscuit base which was buttery and slightly salty. Whilst moist and slightly crumbly, it still held its shape well. Smooth and creamy, the tangy lemon filling was light and refreshing. It wasn’t overly tart with a sweet aftertaste that resonated.

The meringue was light and fluffy, I liked that it wasn’t overly sweet to maintain the balance of the dessert. 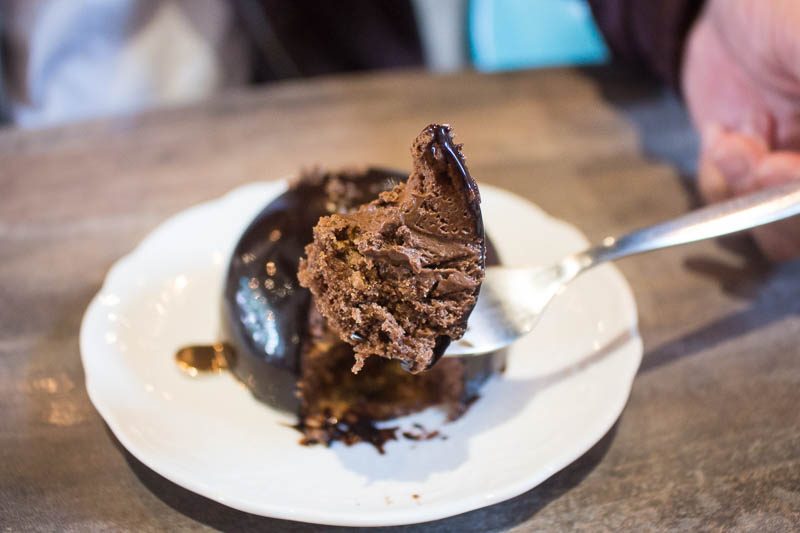 This was definitely a decadent and indulgent dessert. There were varying textures to it, from the moist chocolate cake to the crunchy middle, fluffy chocolate mousse and smooth chocolate ganache on the top. It looked like it was fit for royalty with a glossy shell topped with the gold shimmers.

It wasn’t too sweet and the quality of the chocolate really shone through. Silky smooth and velvety, the intensity of the chocolate flavour lingered. What tasted like a crispy hazelnut feuilletine and liqueur-soaked cherries were delightful. They helped to cut through the richness and added more dimensions of taste.

I visited Niche Savoureuse without many expectations, but they thoroughly impressed me with their quality food. Granted, they aren’t the fanciest cafe with crazy creations, they still serve authentic homemade foods with great standards that I can attest to.

They also make customisable cakes which I’m sure taste just as good as it looks, with many orders as his testimonial. I’m so glad I decided to pop by Niche Savoureuse because now I’ve found my new favourite go-to cafe that serves not only delicious but affordable foods. Kind Kones: Guilt-Free Ice Cream So Good You Would Never Have...