Non Entrée Desserts is home to wacky creations and its wonderful avalanche series, that has created a storm on Instagram earlier this year.

This time, owner Alex Toh and his head chef have created a new themed menu entitled: 《Back To The Future : 那些年我们吃过的回忆》, which will mess with your mind and tingle your taste buds because what you see may or may not be how it tastes like.

Really ingenious I must say, I had a really fun time tasting the new menu. 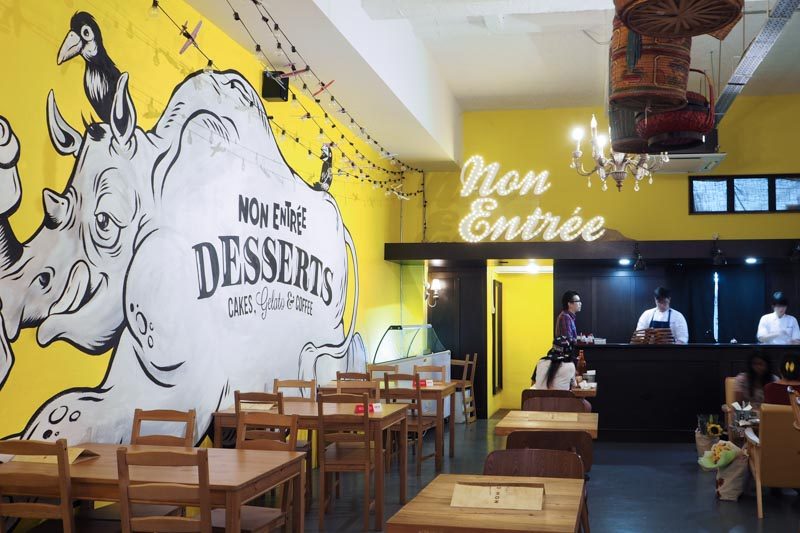 They also put in extra touches to create the nostalgic feels from the 1980s, hanging baskets and posters of our past favourite fictional characters all around the cafe, and serenading us with evergreen tunes from yesteryears. Like a time capsule, transcending space and time to our childhood days. We started with the Singapore Breakfast ($13.90). While it may look like the perennial breakfast favourite of both young and old, you’d be surprised to know that this is a full-fledge dessert!

The ‘soft-boiled egg’ is completely edible, even its shell too, which is made of chocolate. The egg white is made with coconut panna cotta, along with an exotic yolk that you can burst and watch it flow just like a real egg.

Served on the side is the ‘kaya toast’, consisting of kaya parfait sandwiched between two really crispy toasts. The frozen parfait is like an ice cream, only lighter in taste and flavour. It felt like I was having an ice cream sandwich. Just like how you’d have your egg and toast, use a spoon to break the ‘egg shell’ then pour the inside on the bowl along with the broken shells. Drizzle some ‘soya sauce’, which is replaced by gula melaka; then sprinkle a dash of ‘pepper’, replaced by cinnamon powder.

Swirl it altogether, and dip the toast in to the ‘egg’ for a mouthful of textures. The citrusy taste of the yolk, made of a concoction of mango, yuzu, pineapple and passion fruit, cut through the sweetness of the panna cotta, making it well balanced in flavour.

The entire presentation tricked my mind into thinking the ‘egg’ would taste savoury, but was literally left confused for a couple of seconds trying to allow the sweetness sink in, and that this entire dish is a dessert. Mind-blown! After ‘breakfast’, we were served with a bowl of Bak Chor Mee ($14.90). While my mind hasn’t recovered from the first dessert, I was left confused again with this dish.

I could smell the familiar scent of vinegar, which was already making me hungry for a bowl of real bak chor mee, but I had to prepare my heart and tastebuds for the first bite. I was determined not to be fooled again! Interestingly, the colour of the noodles looked just like the real fishball noodles, when you mix it all together just as you would before digging in.

It wasn’t overwhelmingly sweet as what I would expect, and reminded me of lou hei during Chinese New Year, probably because of it being partly sweet and sour at the same time. With this new-age Bak Chor Mee dessert, you’ll never have to worry your noodles will turn soggy. Alongside the already interesting dessert menu are an assortment of cakes to go with. These are a play of our favourite childhood snacks that I fondly remember, all blown-up in scale, causing them to look incredibly adorable. I couldn’t take my eyes off the Gem Biscuit ($10.90) , four times larger than the ones sold at old confectionery stores, the gem biscuit cake was beckoning me to get it. The ‘biscuit’ portion is made of a soft mousse-like milk chocolate, hiding an apricot and almond centre, adding a slight tartness to the overall sweet treat.

The ‘gem’ which is usually made with icing sugar, is now replaced with a meringue that comes in different pastel colours. Old habits die hard, just as I loved eating the icing sugar last, I chowed my way through the cake before taking my time to enjoy the meringue.

The Ang Ku Kueh ($9.90) is also worth a mention. It is made of a strawberry curd centre, covered with a layer of strawberry jelly, and accompanied with a shortbread base. Great for those who prefer a fruity desserts. Joining the chocolate and matcha Avalanche Series, is the new localized Horlicks Avalanche ($13.90) flavour. A must-try when you’re there, as it would not be a permanent item on its menu. The presentation is a joy to watch, while the warm Holicks lava brings about a certain warm fuzzy feeling to the belly, making it enticingly irresistible.

As with all novelty foods, I would recommend making your way down to Non Entrée Desserts for its new dessert menu. I walked away with my senses uplifted and a sugar high from all those sweet creations. A place to breakaway from the stresses from being an adult, while you recall and tell stories of fun memories during your childhood days.