Nestled in a corner of City Square Mall, Old School Delights is the brainchild of a couple who wanted to relive Singapore’s nostalgic past through food.

From classroom-style decor to its authentic home-cooked dishes, every single element of the restaurant has been thought out carefully. The effect? To bring you down memory lane, right back to the ’80s. 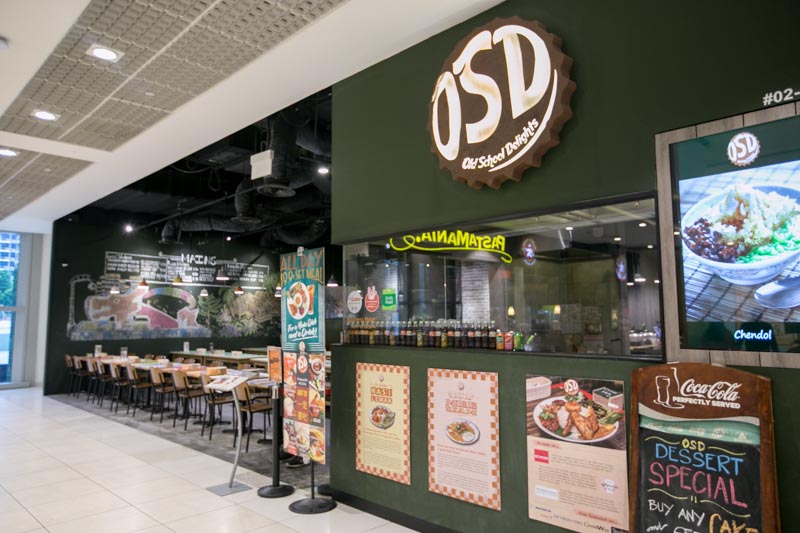 Sparking the entire culinary journey was the wife’s grand aunt, who would serve up her special bowl of mee siam every Chinese New Year from as far back as 1988.

Fuelled by a love for authentic, home-cooked food that’s prepared traditionally, the couple started Old School Delights at Upper Thomson in 2010. They wanted to share that little tinge of nostalgia with the public.

Though the Upper Thomson outlet has since closed, two more outlets have opened — one at Esplanade, and another at City Square Mall. 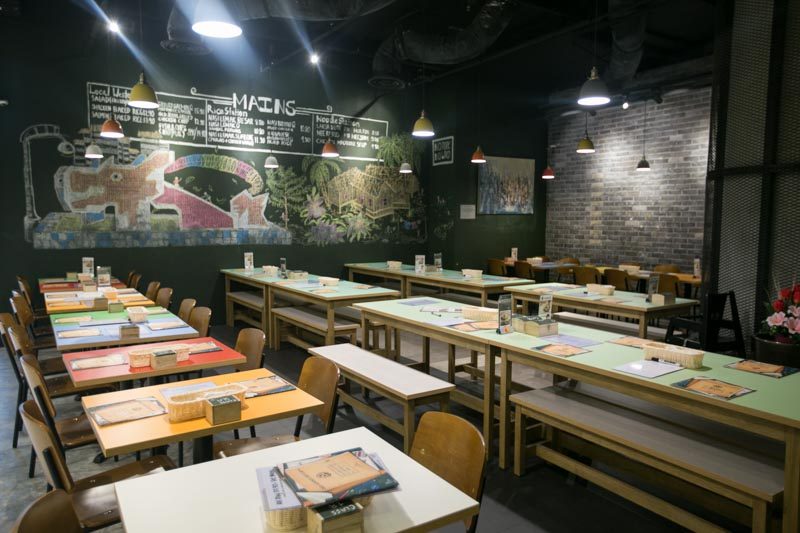 Stepping into Old School Delights felt like I was transported right into a classroom.

I really loved how welcoming the entire space was. Large wooden tables and benches lined the area, and one of its walls was an actual chalkboard, complete with scribbles and drawings of a playground and wooden stilt houses. Just like any other restaurant, every table was given a table number, but how Old School Delights did it differently was to label it as class names instead. So you’ll get table numbers such as “Class 6A” or “Class 7A”. 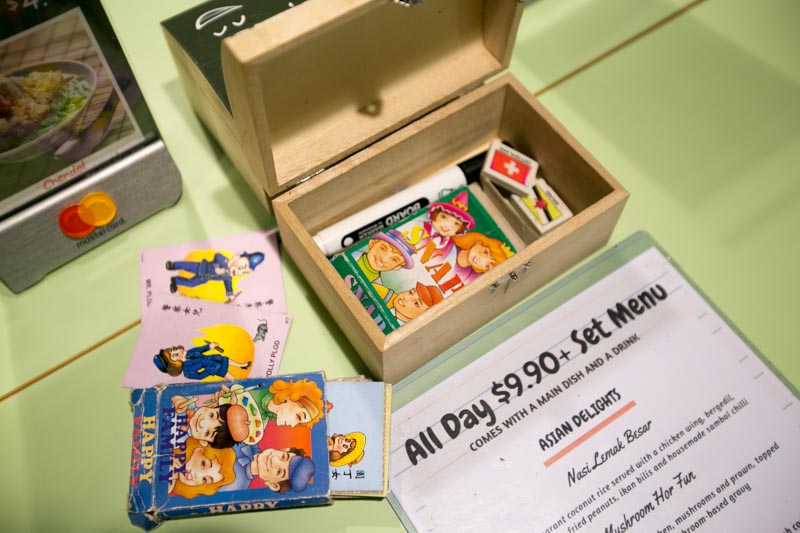 Opening the little wooden boxes revealed an assortment of old-school games, such as Happy Family, Snap and Old Maid, and even other childhood games like five stones.

Feel free to play these games with your friends! In line with the classroom theme, Old School Delight’s menus are designed like A5 exercise books, complete with fake names, subjects and classes. How adorable! 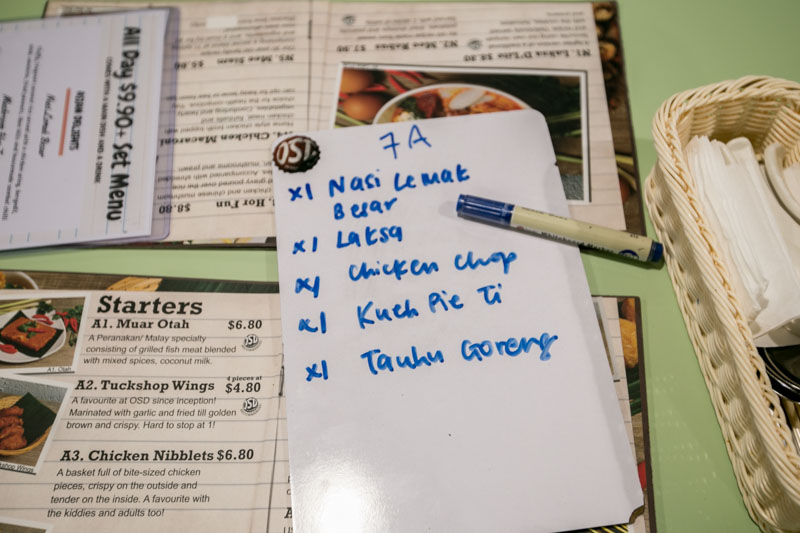 To top off the entire experience, you place your orders by writing them on a large whiteboard.

I was already bowled over by the entire concept, which is pretty unique by itself, and couldn’t wait to try the food. 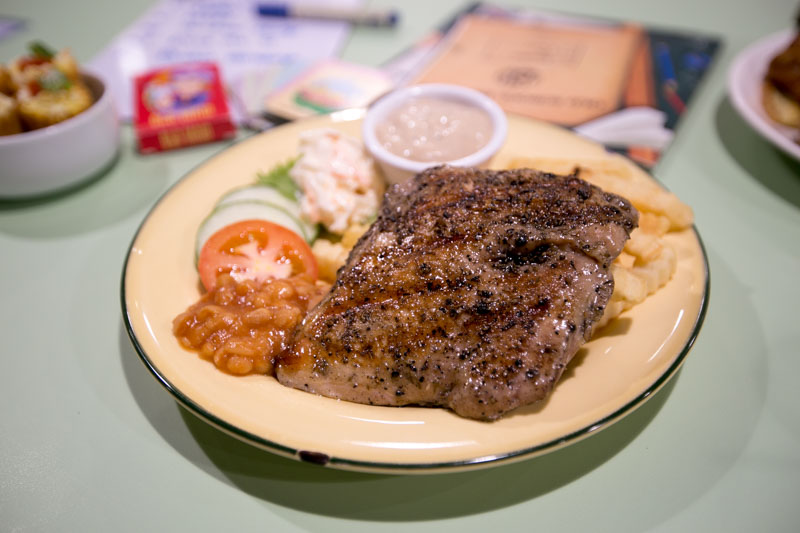 Starting off my meal was the Old School Grilled Chicken Chop (S$12.90), which was served with baked beans, french fries, coleslaw, and black pepper and mayo sauce. 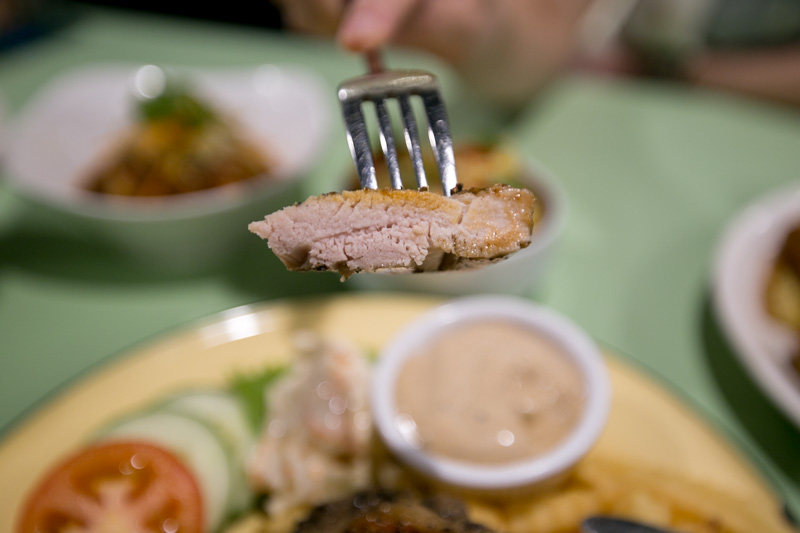 Marinated with crushed black pepper and herbs overnight, the deboned chicken thigh was completely saturated with all that savoury and flavourful spices. It’s also grilled with olive oil just before serving.

The skin was delightfully crisp and salty, while the meat on the inside was still fork-tender and soft. As a result, the chicken chop was super juicy and I bit through each piece with ease. I fell in love with the black pepper and mayo sauce, which was served in a ramekin.

Though it might sound simple to you, the sauce was addictively delicious and I couldn’t stop dipping my chicken chop and fries into it. Thick in texture but silky smooth, it was creamy, tangy and piquant, as if a tinge of paprika or cayenne pepper had been added. 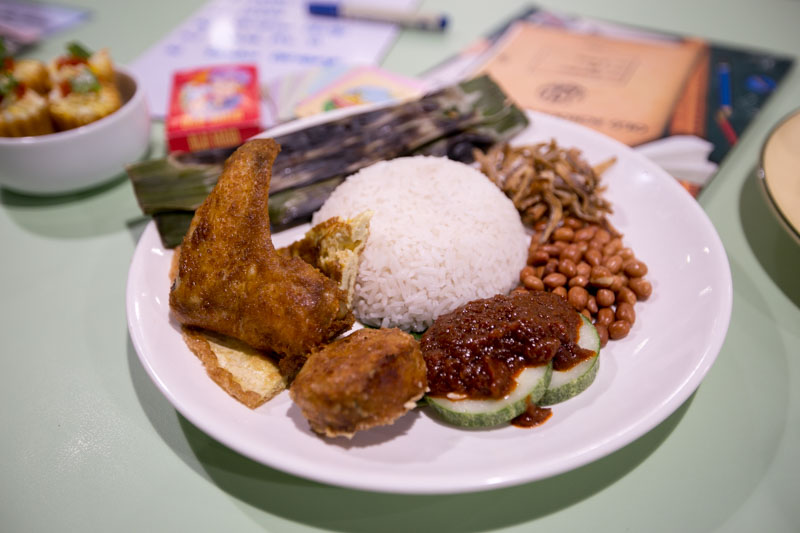 The Nasi Lemak Besar (S$8.80) is one of Old School Delight’s best sellers, and it’s easy to see why.

The fluffy white rice had been infused with fresh coconut milk and pandan leaves, and it was served alongside a chicken wing, otak, bergedil, peanuts and ikan bilis, and a dollop of its house-made sambal. My favourite element of the dish was the house-made sambal. It had been cooked lovingly and diligently over a fire by hand, and this secret recipe had been passed down for generations in the owners’ families.

Taste-wise, the sambal was sticky sweet, with a smoky and spicy aftertaste. To some extent, the thick and paste-like texture even reminded me of rendang. You could see little bits of caramelised onions, herbs and spices in the sambal itself.

It was a huge plus for me that it wasn’t too oily either and had just the right amount of moisture. Don’t be deceived by the colour and looks of the plain white rice — it was actually really fragrant. I could taste the distinctive sweetness from the fresh coconut milk, as well as the aromatic pandan.

Truth be told, some nasi lemak stalls have really oily rice, like the kind that leaves shiny streaks of oil on the banana leaf or plate. I was super glad to note that Old School Delight’s rendition of this classic staple was just right — it was light, fluffy and soft. Served in a white ceramic bowl, complete with the logo of a rooster at a side (how old-school!), was Old School Delight’s Laksa D’Lite (S$8.80).

As you might guess from its name, it’s a lighter version of a traditional favourite and uses more coconut milk than cream. The rempah is also house-made, cooked over a fire for over two hours to ensure that it’s fragrant and aromatic. 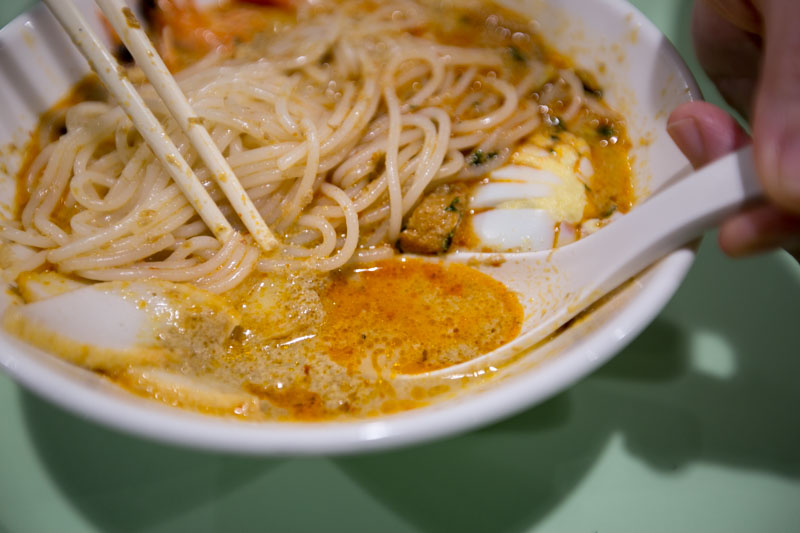 The broth was definitely on the lighter side, but it still had a good amount of flavour.

I could taste the intense smokiness from the rempah, which was nicely balanced out by the milkiness of the coconut milk. There were also umami notes from the dried shrimp and turmeric. 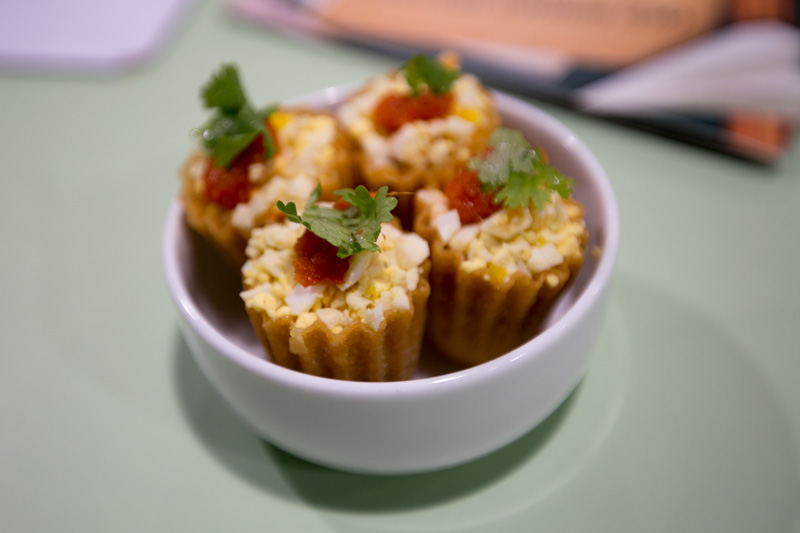 It’s a classic Nonya favourite, consisting of a crispy shell filled with mang guang, which is turnips and carrots. It’s also topped off with eggs and Old School Delight’s homemade chilli sauce. 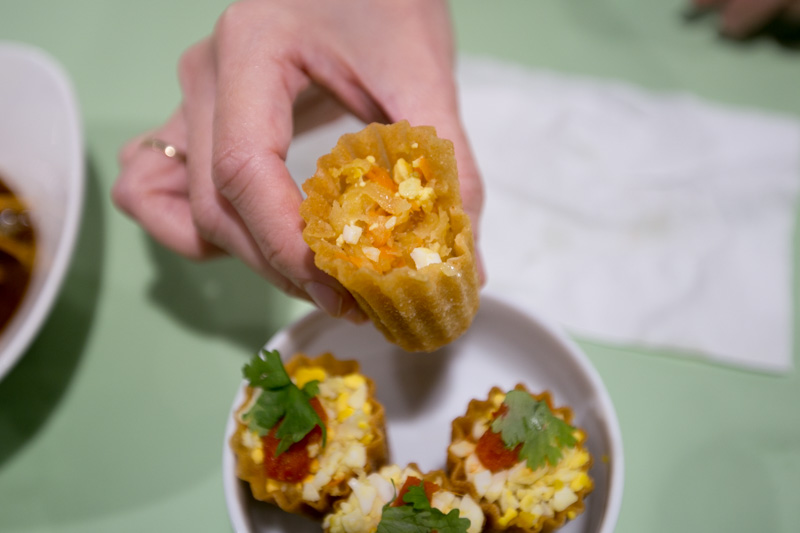 Our recommended way of eating this? To pop the entire thing in your mouth.

The outside shell is crunchy and crisp, and as I bit down on the kueh pie ti, I got an immediate a burst of moisture and sweetness from the egg and shredded vegetables. It’s almost as if a balloon had popped in my mouth. The parsley added a hint of refreshing mintiness as an aftertaste. 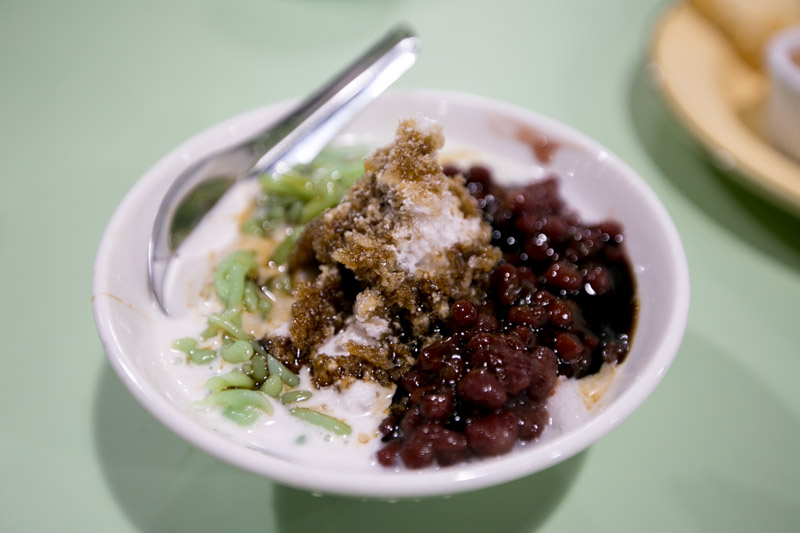 Be sure to order Chendol (S$4.50), which is made with pure 100% gula melaka and contains zero artificial sweeteners. Old School Delights even makes its own jade-coloured chendol noodles! 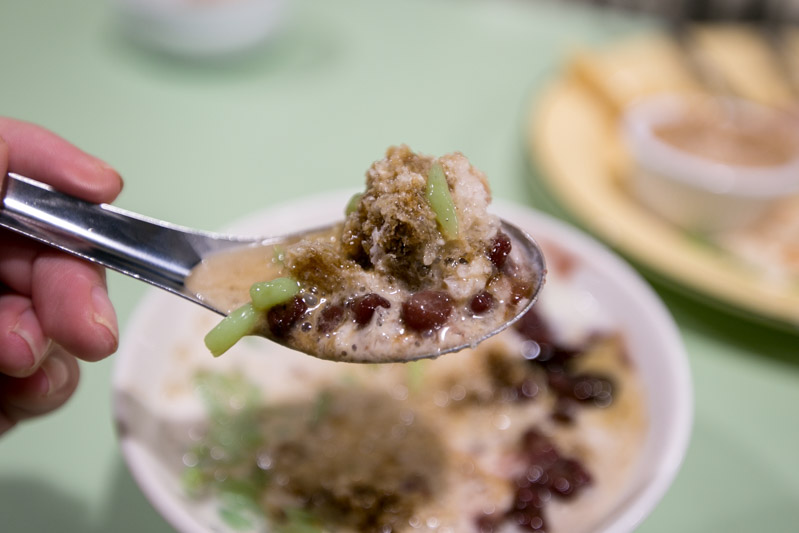 The coconut milk was incredibly fragrant and light, and I loved how the pandan jelly noodles were mildly sweet but aromatic at the same time. To top the indulgent dessert off was the red beans, which added a tinge of rich nuttiness to every spoonful.

Dining at Old School Delights certainly brought me back to the ’80s — or at least, to a part of my childhood where food was served on thin metal trays, kids played five stones and Old Maid on streets, and vendors were dishing out chendol by the roadside.

The food at Old School Delights was delicious and comforting, there’s no doubt about that. A whole lot of thought, effort and love goes into each dish, and it’s clear that the owners are truly dedicated to bringing quality home-cooked food to the public.

My only gripe was its location. Now, if it were nearer to my house or workplace, I could imagine dining here every day.