Bagging four awards—including ‘Best Picture’—out of their six nominations at the recent Oscars, Korean film, Parasite has got the world eyeing and discussing its immense popularity. From its theories to the unique apartments featured, everyone who has watched the film, seems to have an opinion or two with regards to this controversial Oscar-winning movie. Having watched Parasite (twice, actually), I decided to find out for myself exactly how realistic the movie was. Of course, it’s impossible to re-enact the entire situation between the Park and Kim family, but I decided to re-create one of my favourite scenes in the movie.

It was raining outside and in the midst of dealing with Moon-gwang (the ex-housekeeper) and her husband, Mrs Kim receives a call from Mrs Park, notifying her that their camping trip has been cancelled due to the monsoon rain. As the Park’s drive home, Mrs Kim instructs her to prepare a bowl of Da-song’s favourite Jjapaguri (or Ram-don) by the time they arrive.

In a normal situation, preparing Jjapaguri—a noodle dish cooked using two different brands of instant noodles, jazzed up with pan-fried han woo (Korean beef)—would be an easy feat. However, it is definitely not the case when your family has to settle two resisting frienemies and clean up the house at the same time. This was made worse especially when the Parks’ E.T.A. (estimated arrival time) was only eight minutes. That means, amongst the chaos, Mrs Kim would have to prepare Jjapaguri in eight minutes, a task which I found was impossible to achieve. Nonetheless, in the movie, she succeeded, leaving me rather sceptical about her achievement. As such, I was determined to test this out myself. The dish has just three ingredients: Nongshim’s Chapagetti, Neoguri’s instant noodles and sirloin beef (han woo), representing the wealth status of the Park family. With my ingredients all prepped, hair tied up and hands washed, I was ready to take on the eight-minute Jjapagetti challenge. Immediately after I started my timer, I filled my pot with water, leaving it on the stove to get boiling. I figured that it will take some time for the water to boil and thus, concurrently I started chopping my beef into cubes. Time check: a minute and 44 seconds. 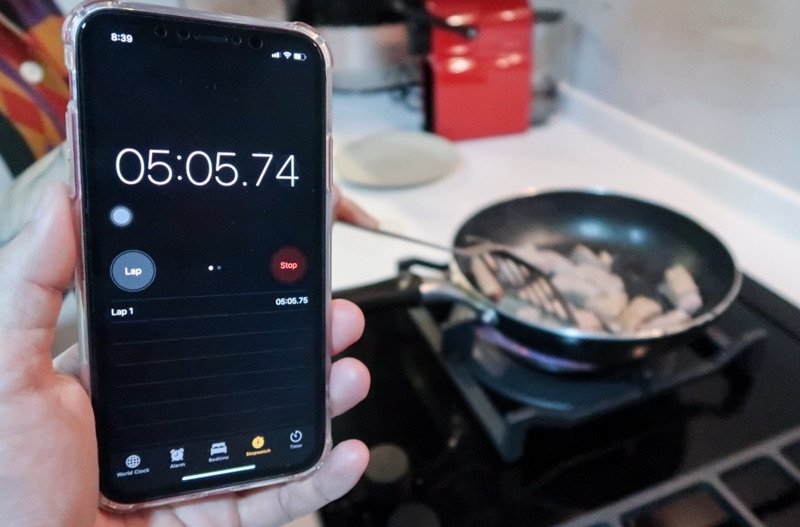 On to pan-frying my beef cubes. For an added flavour, I seasoned the meat with salt and pepper while they heat up on the pan. As the beef cubes were rather small, it took only approximately three to four minutes before it was done. Time check: five minutes and five seconds—looks like the Parks will be back soon. It was probably a minute after that the water was ready to receive my instant noodles. At 6 minutes 38 seconds, two blocks of instant noodles went into the furiously boiling pot of water. I’m no math expert, but with less than two minutes remaining, I obviously won’t have enough time to complete my Jjapaguri by the time the Parks arrive. 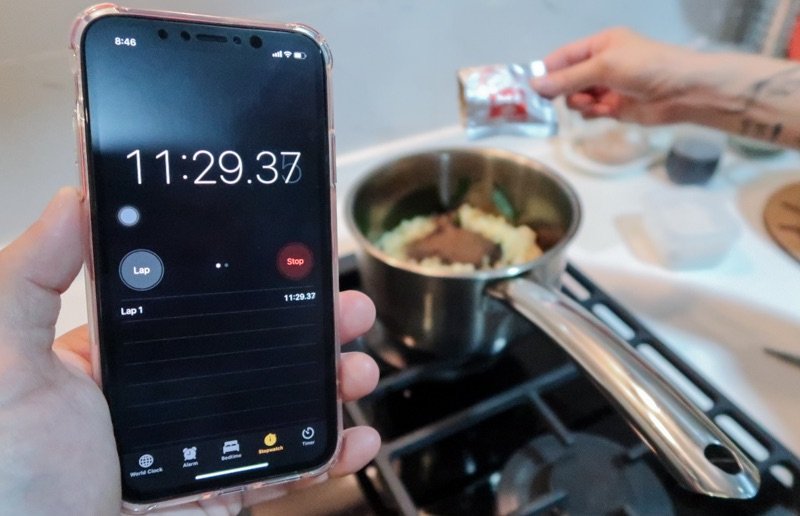 The instant noodles were cooked only after the eight-minute mark, and at 11 minutes 29 seconds (yes, challenge failed, but savouring the end product still goes on!), I added the packets of seasonings into the noodles which were drained of the boiling water. Less stressful, I took my time mixing the noodles ensuring that the seasoning fully coated each strand before adding the beef cubes into the mixture. A few more stirs and ta-da, Jjapaguri completed—just before the 15-minute mark! The Parks would have been done eating the noodles just as I finished cooking mine. Slightly dejected, I was determined to not focus on my failure, but on the result of a hurried 15 minutes of hard work in the kitchen. 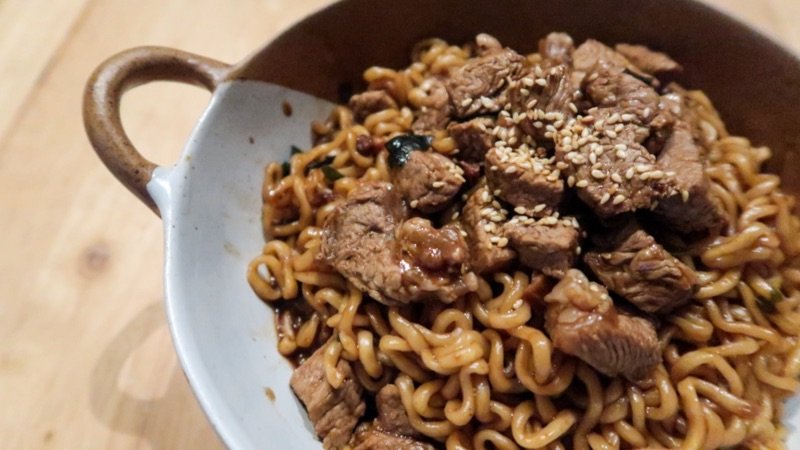 As with all instant noodles, my bowl of Jjapaguri was delectable! The thick and chewy carbohydrate filled noodles paired perfectly with the savoury black bean flavoured seasoning from the Chapagetti. The Neoguri seasoning added a spicy note which successfully cut back on the greasiness of the noodles and the pan-fried beef. 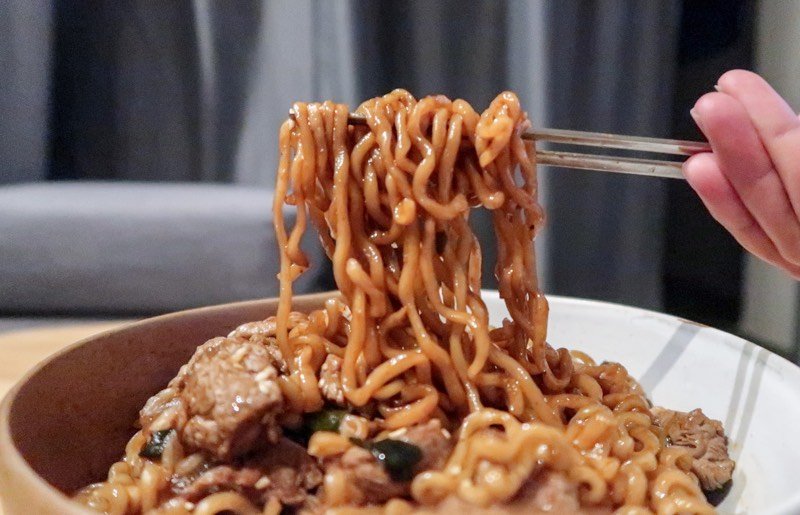 Besides adding a touch of class and sophistication into the bowl of rather simple (yet delicious) noodles, I must admit that the beef did not contribute much to the Jjapaguri’s overall taste as its flavours were separated from the noodles.

However, if you happen to have some kimchi laying around in your fridge, take my advice and eat the Korean fermented cabbage with the noodles. The acidity from the kimchi not only enhances the taste of the Jjapaguri, but it also adds a layer of crunchiness that is refreshing and will make you crave for more!

Whether you are a fan of Parasite or a lover of good food, why not take on this eight-minute Jjapaguri challenge? I’m sure you will not only have a blast cooking in the kitchen, but you will also relish the product of your hard work!

Price: S$10 onwards, depending on the price and cut of beef