Deviating wholly away from the orthodox Singaporean dream, these brave pastry chefs, having had a career switch at some point in their lives, are now confidently some of the finest bakers in the country.

This fire to live out their passion has pushed them to reach for the very top of the culinary world in Singapore. Establishing themselves as full-time pastry cooks at Michelin-starred restaurants in Singapore, the pair have dovetailed more than once in their lives to collaborate on pastry work and life experiences here and abroad. 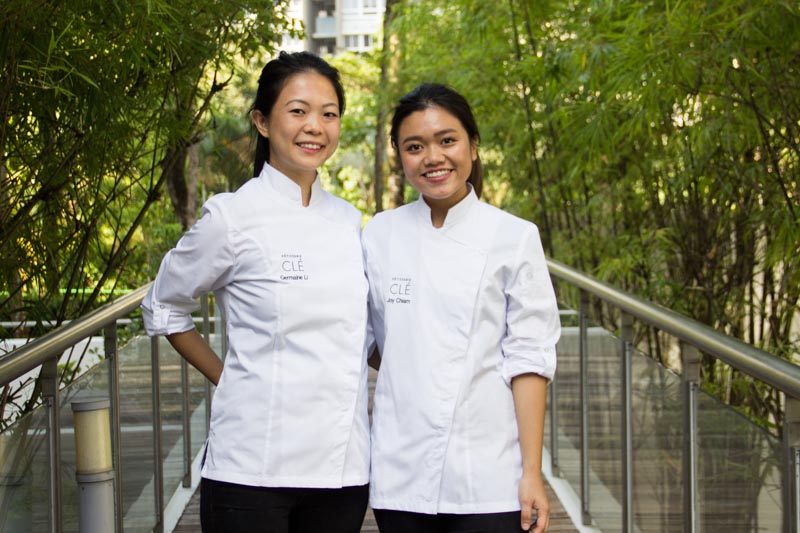 Joy Chiam boasts having kitchen experience from the now-defunct 3-Michelin-starred Joël Robuchon Singapore. The sudden announcement of the restaurant’s closure left her to purposefully think about her next move. While it came as a surprise, Joy was undeterred.

She set out to dream bigger and better — and as she put it, life had other plans. She reached out to Germaine, who was a former roommate, not knowing at the time that Germaine had also coincidentally just left 2-Michelin-starred Les Amis. They quickly struck mutual ground regarding their status, and Joy consequently engaged Germaine to be her business partner for the project Pâtisserie CLÉ. 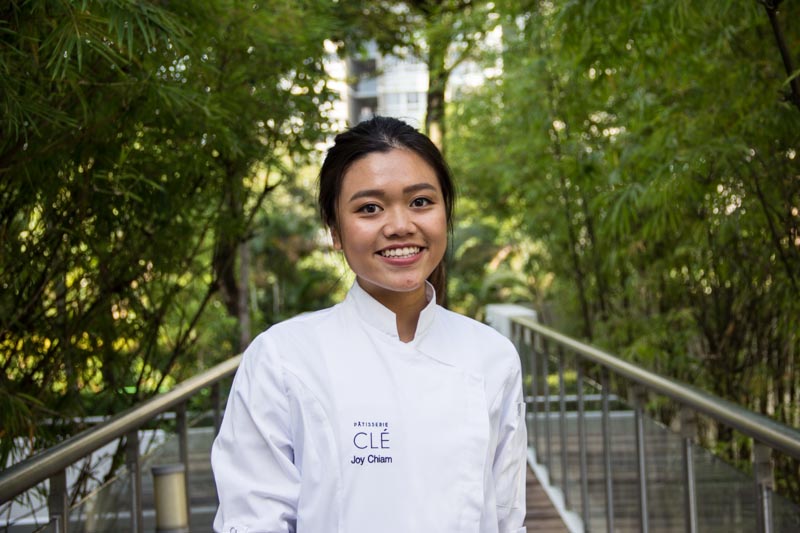 I visited the pair at their bakery and to hear and learn more about their culinary stories. I caught an insider’s glimpse into the daily working processes of the bakery and saw that they were developing recipes for an appearance at the Singapore Tea Festival later that month.

I later sat down to discuss the story over a luxurious array of pastries laid out on a specially-commissioned stainless steel chef’s table. 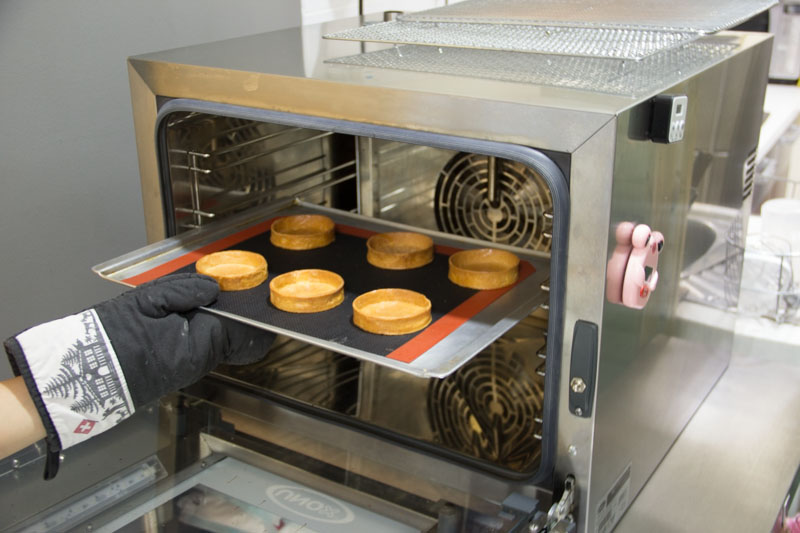 Joy begins by telling us that she graduated from Nanyang Technological University (NTU), having majored in Business Marketing at the prestigious Nanyang Business School. She identified her interest in baking at an early age and took steps to pursue it as a hobby during her teenage years.

Following cookbook and online recipes, she started baking for close family and friends who then quickly recognised her natural talent. Her parents subsequently sent her on a summer cooking program at At-Sunrice GlobalChef Academy where she continued to excel at the craft, with a particular focus on baking.

Joy had experienced such a memorable introduction to the culinary world and immediately saw the appeal of working in the kitchen from her time at At-Sunrice. She continued to hone her skills, going on to develop her adept handiwork and laser focus, which characteristically defines her work style today.

In university, she, unfortunately, had to spend extended periods of time away from baking, and Joy missed it terribly. There was a therapeutic emotional response to performing pastry work, and realised she could not do without it. Joy finally decided to pursue her dream of becoming a pastry chef full-time, but not without first fulfilling her parents’ wishes of completing her formal education.

She packed her bags after convocation to head to Paris, where Germaine would already be waiting to greet her for the first time as her new roommate. Germaine hadn’t talked much prior to the interview, but her reserved nature quickly fades as I turn to pose questions about her favourite creations. She opens up to tell me of her backstory as Joy continues having a go at working on the pastries in the kitchen.

Germaine had to uproot her already-established career in the corporate world to pursue her yearn for creating art through her passion for food. Having started at 15 years old commissioning traditional pastries for Chinese New Year, the call to formally begin her culinary journey could no longer be ignored.

She just could not shake off her ideas for pastries, even during her down-time. The Senior HR Manager-turned-pastry chef had an inner battle with herself, eventually choosing to leave the security of her job to embark on a new and uncertain challenge with vindication. 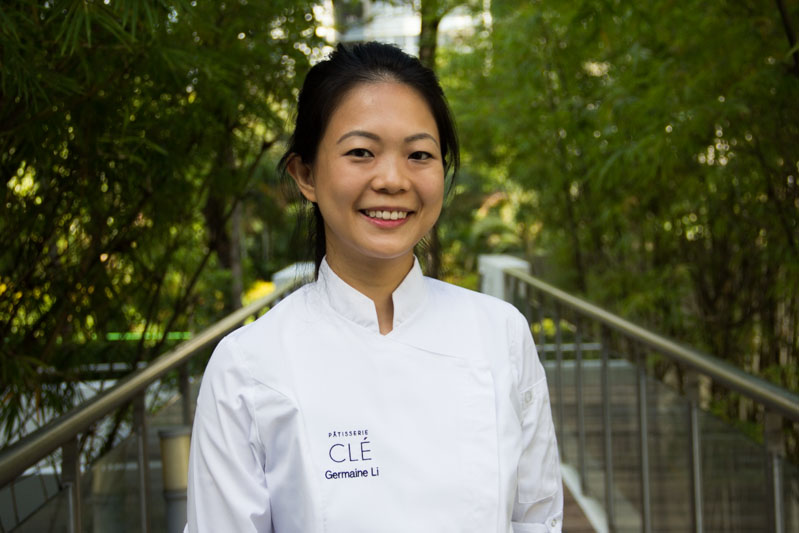 She was not alone and had the fullest support of close family members and friends. Their encouragement spurred her to do what she loved, and she did it mostly to stay true to herself.

Notably, she took huge inspiration from her own brother who was already making his own mark in the culinary scene. Having come from a family background of inspiring cooks, it was only natural for her to join them. Paris brought the two together for a stint at the famous school of Ferrandi Paris. The two battled it out to become the best students in Paris for a year, earning top scores for pressure tests. Adapting to the culture in Paris was effortless, they realised, as long as they embraced the experience wholly and with sincerity. This amalgamation of Asian and European influences is evident today in their research and development for their current menu, where they are creating fine French pastries with an Asian twist.

After spending a year away in Paris, the pair were ready to come back. Their résumé, coupled with experience from a six-month-long internship in established French restaurants, earned Joy and Germaine an audition at Joël Rubochon and Les Amis, respectively.

Having impressed the interviewers, they promptly started work as pastry chefs. The dream only grew from there and they now are the team behind Pâtisserie CLÉ.

Cle is French for ‘key’. Their philosophy is built around the premise of pastries being the key to unlocking the heart. They discovered that French recipes do not work as well they did in Paris because of the quality of local ingredients. Deciding to create a brand of their own led them to combine modern French processes with Asian ingredients, and Pâtisserie CLÉ was born. I had the honour of sampling some of their many offerings at the bakery to have a real taste of their divine creations.

First, I had the Gateaux de Voyage Marble Cake. It translates to ‘traveler’s cake’ in French. Traditionally in France, they can be conserved for days at room temperature and are typically bought as gifts on long journeys to the recipient’s home. The cake consists of chocolate and vanilla swirls, enrobed in a milk chocolate and almond glaze. I cut through the chocolate-glazed shell to find a dense cake that was rich and moist. It was over-the-top, but in the best way possible.

Being a chocolate lover myself, this was the perfect entry into the world of Pâtisserie CLÉ. 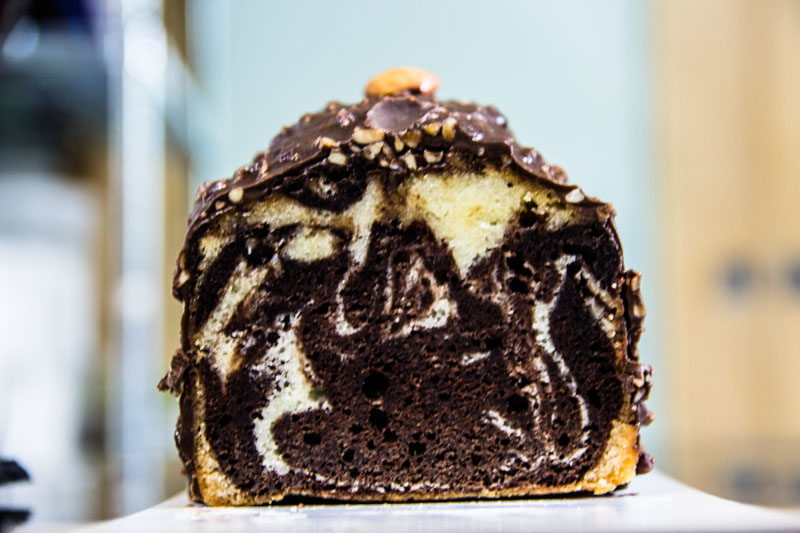 We then had the bright yellow-glossed Daisy Cake. I could see my reflection through the mirrored surface of the cake, which made for a very pleasing aesthetic. 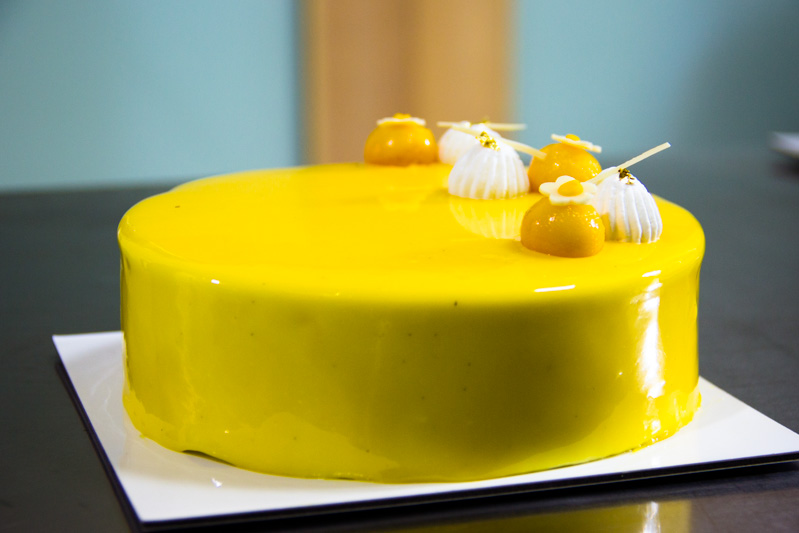 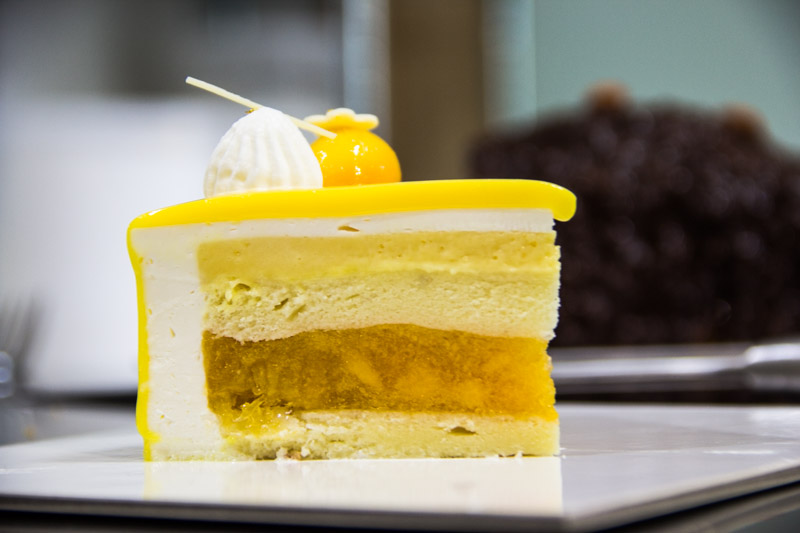 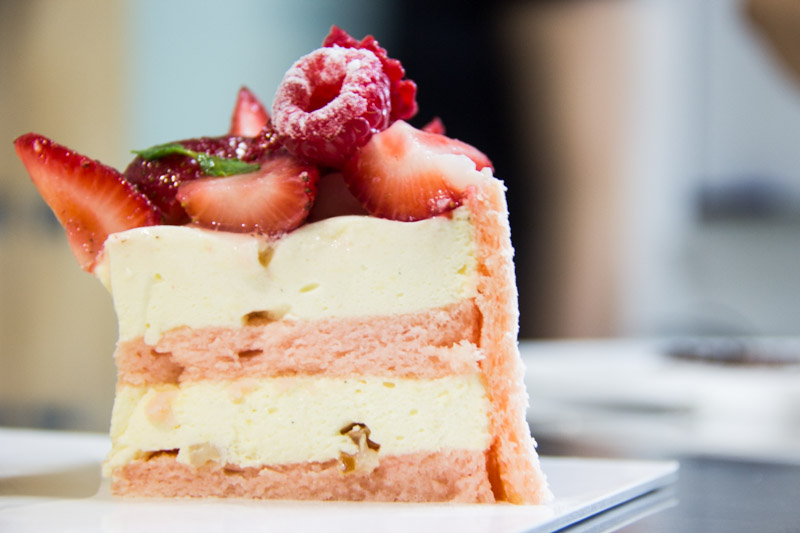 The Pink Lady was another delectable fruit cake. It was tart and well-balanced, contrasting perfectly with all the other components in the cake. The vanilla bean & rose mousse is carefully layered on a delicate rose sponge cake and topped with strawberries, raspberries, and vodka-soaked lychees. 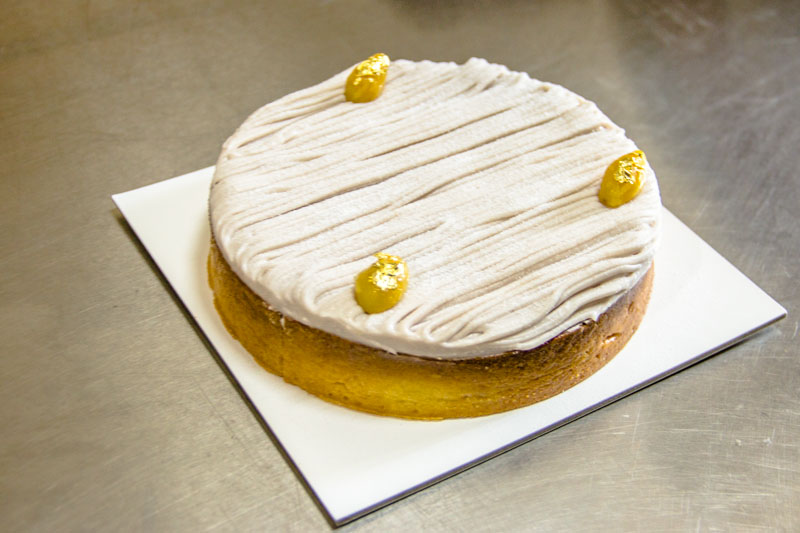 Lastly, Joy revealed to us their newest menu item, the Orh Blanc Tart. Riffing off the traditional Teochew orh nee dessert, this tart took all the best parts of the dessert and elevated it to a star-quality French-Asian dessert. This is as luxurious as it can get for the humble orh nee, in my books.

Pâtisserie CLÉ is truly a bakery in its own class. Joy and Germaine work with great finesse, to create beautiful works of edible art. These two seem as madly passionate about food as top athletes are about their respective sport.

All of these correlate with a vision of these humble chefs at the very top of their craft. Unconvinced? Try their delectable creations by ordering here and get the proof in their unforgettable cakes. Now You Can Enjoy Heritage Cakes In Chendol And Mango Pomelo...