“Voted the most raw fish in one Yu Sheng” 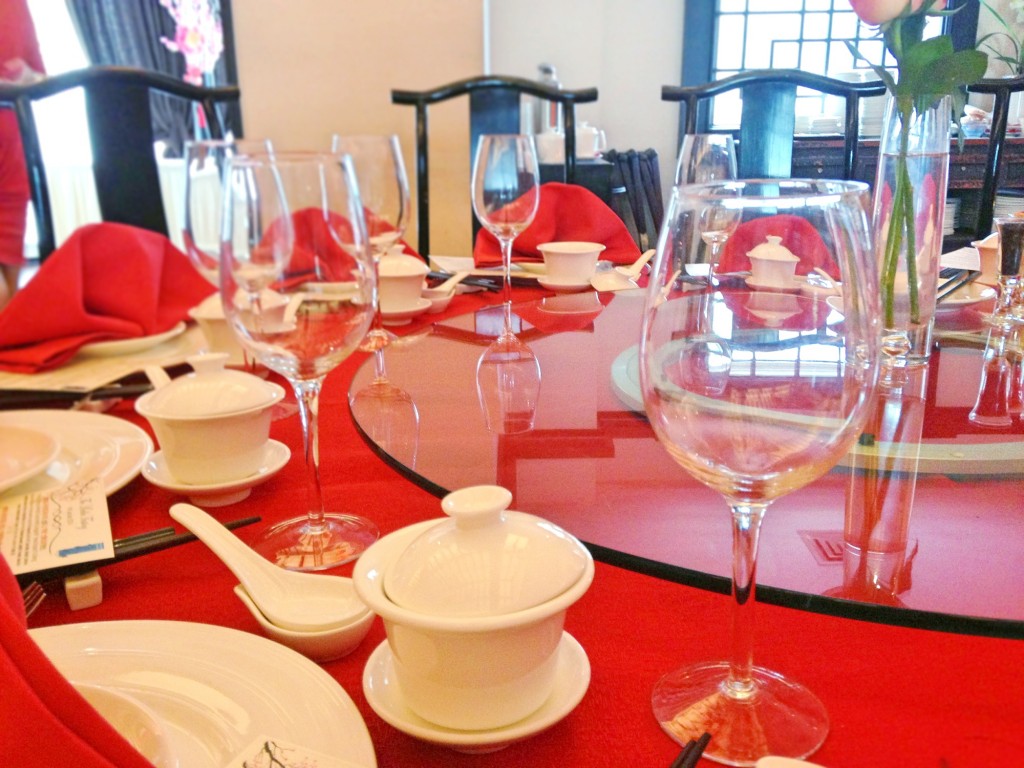 Dominic (Peony Jade Marketing) and Joy (37 Communications) have always been very accommodating, and I am happy to be back at Peony Jade for a tasting of their Lo hei menu. All items covered today are a la carte items. 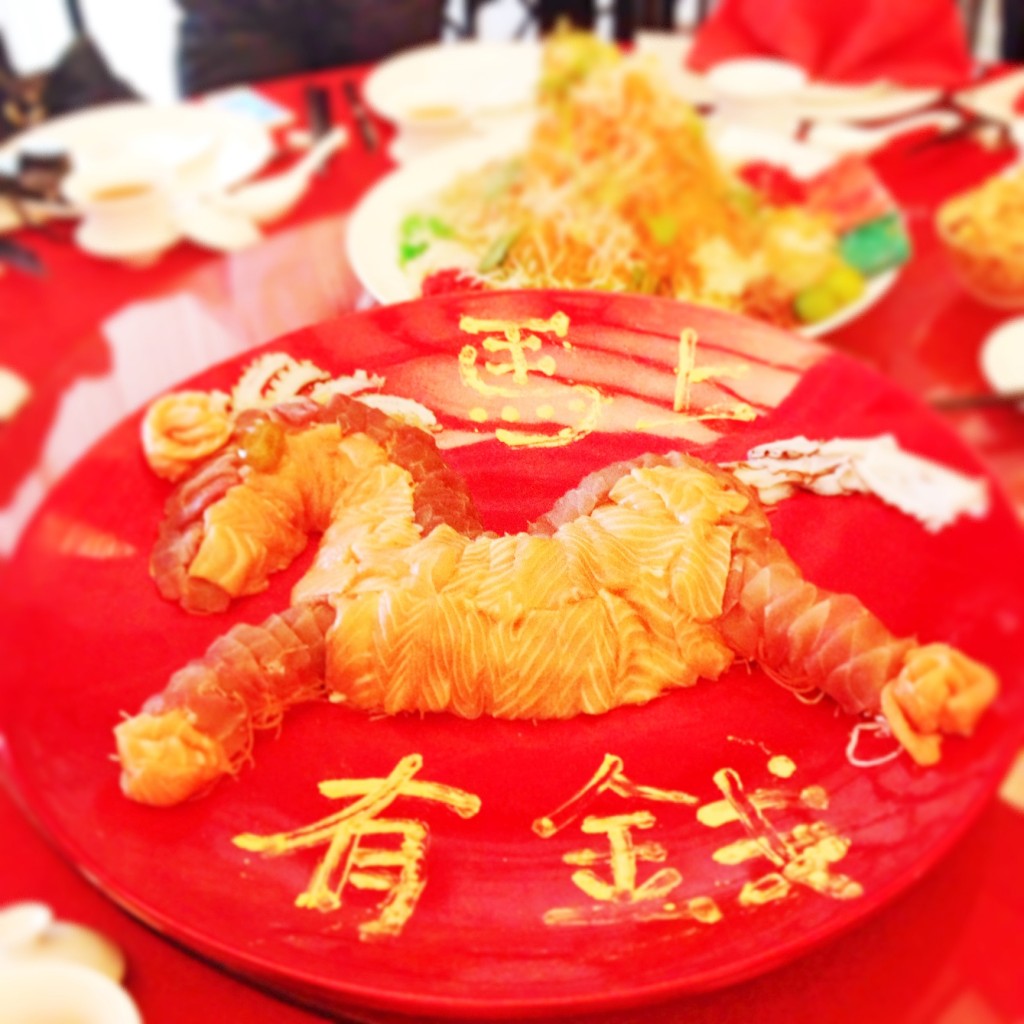 Most restaurants would create the Chinese character horse ‘馬’ on the plate like Hai Tien Lo, but Peony Jade takes their horse Yu Sheng way more seriously and literally. They don’t even use shredded carrots and radish to form the shape, but instead use raw Sashimi meat to create an actually horse shape. Totally badass. Has hints of truffle oil as well.

And the amount of meat resultant from this image is abundantly overwhelming. I’ve never had so much raw fish from one Yu Sheng ever. I think I had more fish meat than raddish and carrots. Supposedly stated to serve 10 people, which is true if it’s 10 giants.

By the way the Chinese wordings on the plate reads “馬上有錢” or “Get money immediately”. The best kind of blessing. 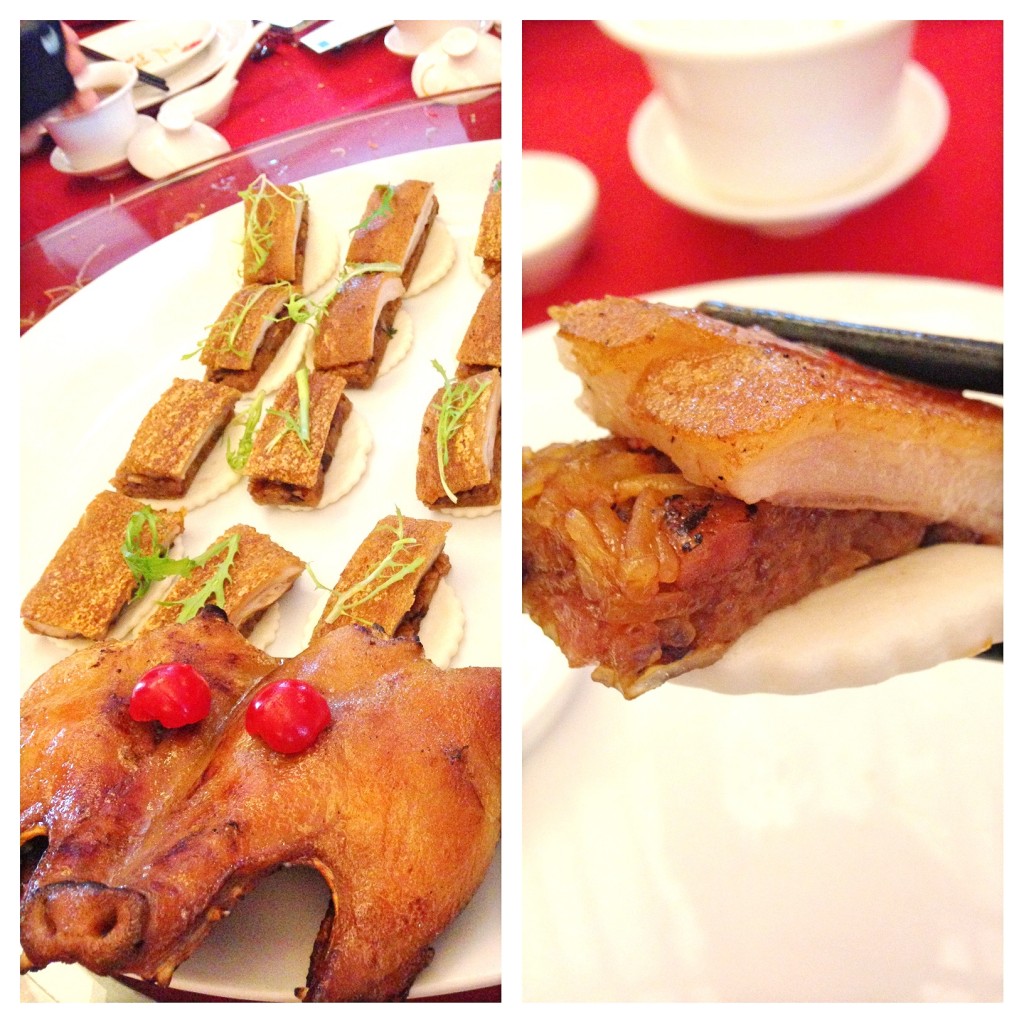 “Abounding Riches” Golden Suckling Pig Stuffed with Glutinous Rice ($8.88/pc). I really loved this combination with the Glutinous rice. The rice doesn’t even taste like typical rice, emulating a soft bouncy meat texture instead. The pig fats are juicy and the skin is not overly crispy like many places.  Add the hoisin sauce served at the side and eat with the flat mantou for a multi-textural experience. This was really fun to watch and interact with. A baked salt crust ingot is first presented, then you get to smash it open with the mallets provided to get to the goodies warpped inside. Apparently Wilsurn from Metropolitant has been working out in his free time, and managed to smash the plate holding the ingot as well. I guess you could say he had a smashing good time. 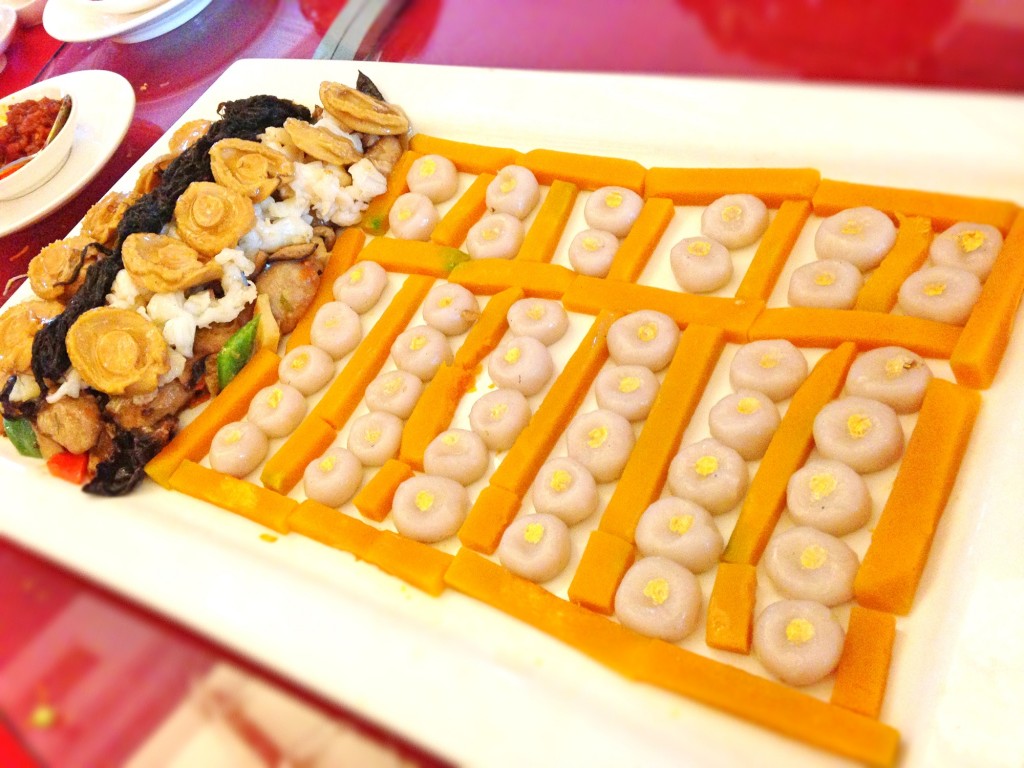 “Abundance Wealth” Imperial Abacus with Lobster and Abalones ($118.88). A typical Hakka dish, the 算盘子 or Abacus dish is made of dough formed of tapioca and yam, cut into abacus-bead shapes thus named. The beads are soft and chewy on the inside.

Typically this dish is simply fried and tossed together with the ingredients, but at Peony Jade Keppel, there is no easy way out. Intricately laid out to look like an actual Abacus with pumpkin strips as the frame, the ingredients also include lobster, bamboo shoots and abalones. “Reaping Good Fortune” Prosperity Truffle Roasted Chicken ($38.88/$68.88). Adding some flair to the usual roasted chicken, the amount of truffles used here was astounding. They must have used an army of pigs to find all the truffles used here.

The truffle sauce was really fragrant and compliments the roasted chicken well with its piquant taste. Roasted skin against the creamy truffle sauce also created very nice texture pairing when taking a bite. 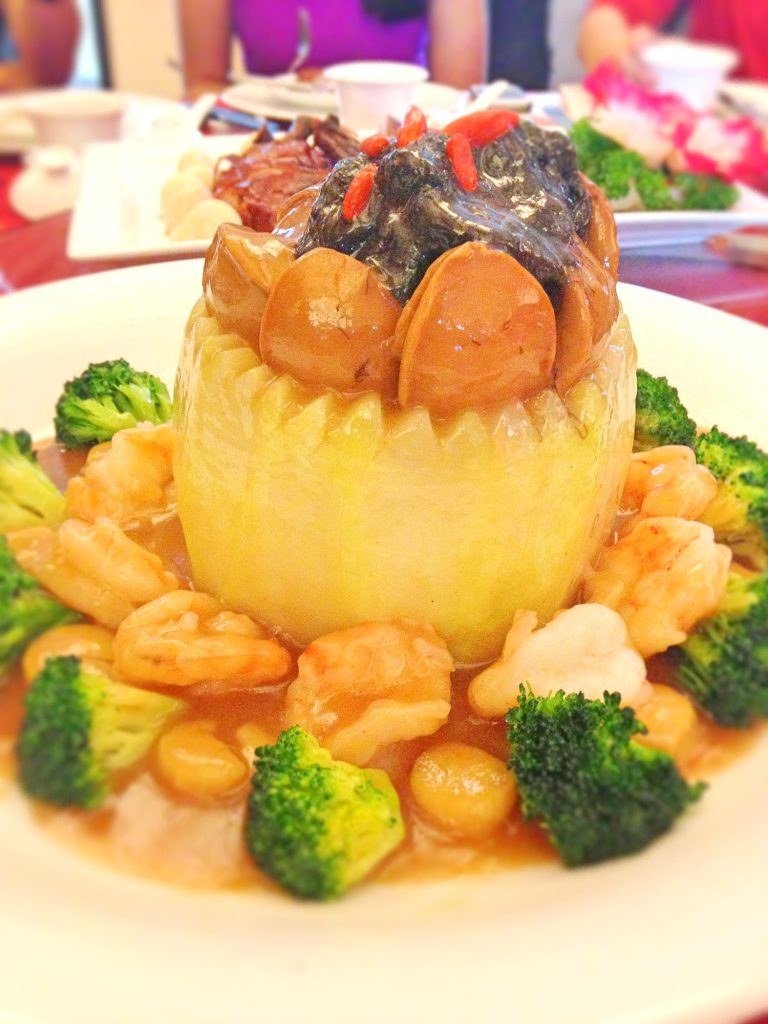 “Abundance & Bounty Wealth” Stewed Sea Treasures ($218.88). Stewed over slow heat for 9 hours then served in a hairy melon, this dish features premium ingredients like King prawn, abalone, pork tendons, pork belly and Conpoy. If you get the horse ingot, I wouldn’t recommend getting this dish as the ingredients are quite similar, just cooked differently. 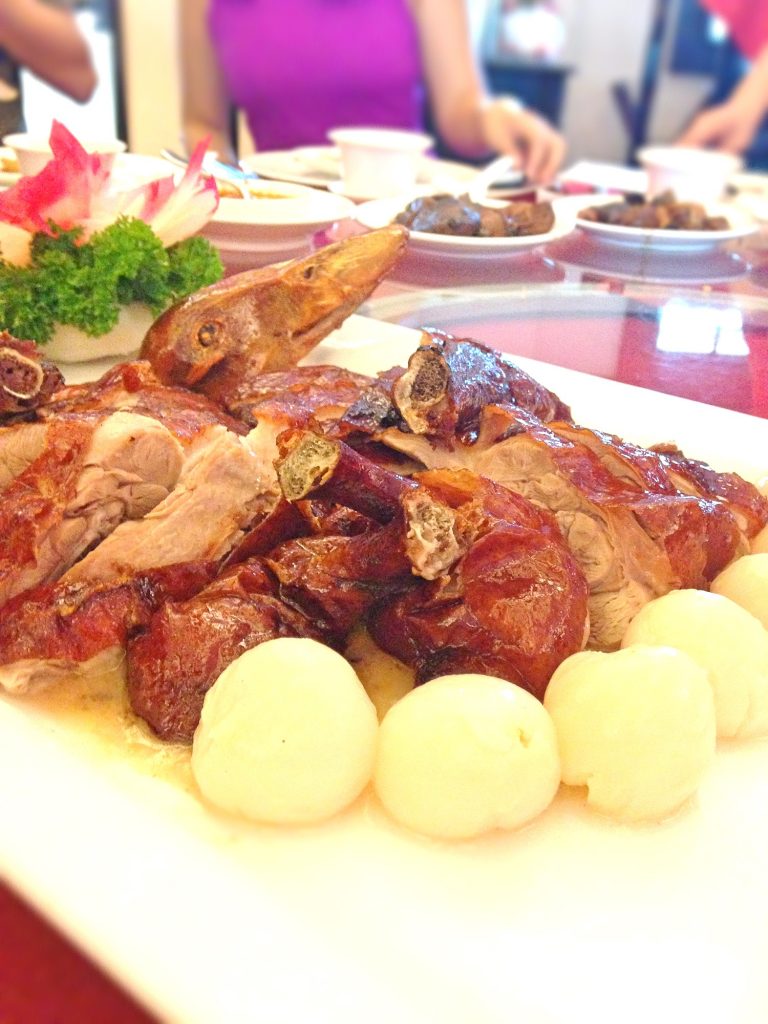 “Reaping Good Fortune” Prosperity Lychee Roasted Mandarin Duck ($48.88/$78.88). Using US flown duck which is more tender and juicy than Asian varieties, the sweetness of the lychee cuts away the slight gameyness of the duck making it delicious and refreshing. Another common Chiense dish that has a simple twist to the flavours. 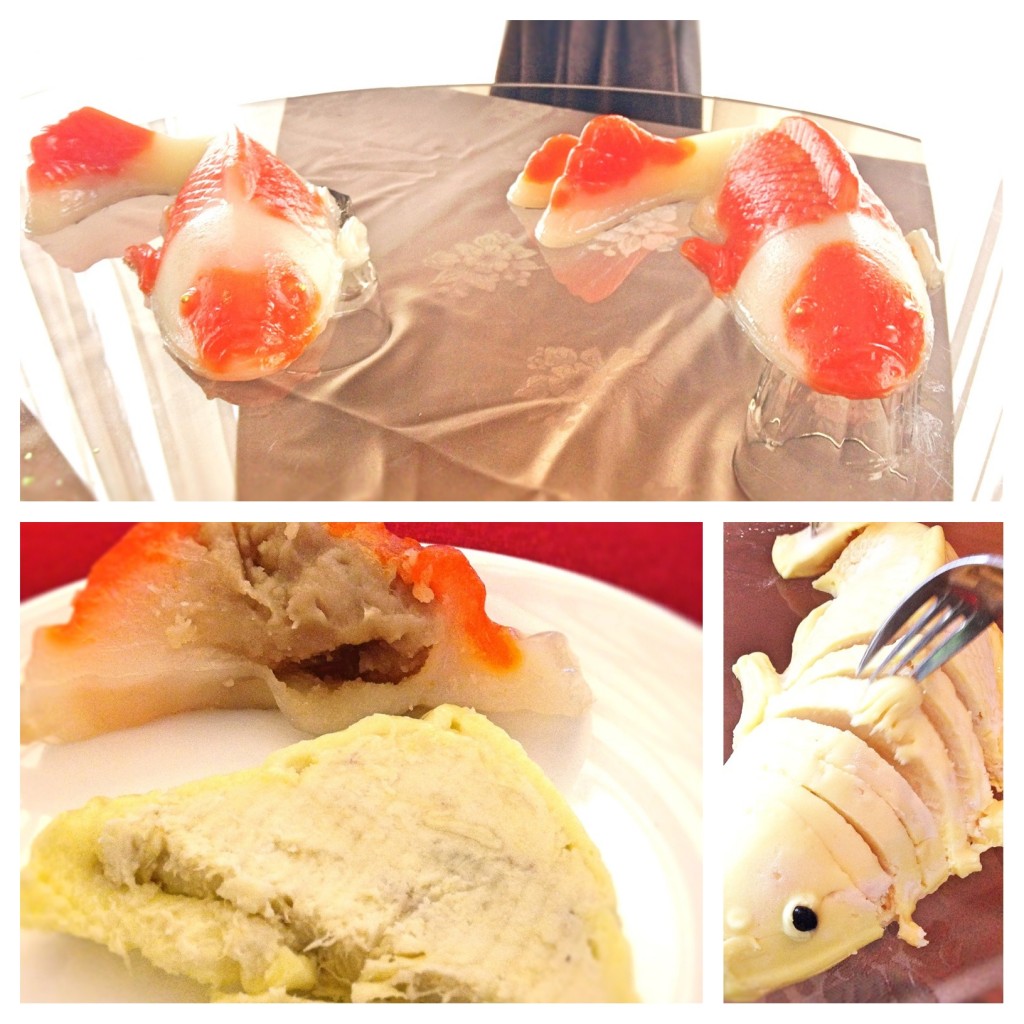 Peony Jade’s Prosperity Koi Fish Nian Gao (Teochew Orh Ni $108.88 and 100% Mao Shan Wang $128.88). The fillings are really really yummy, especially the Durian flavored one with its strong distinct taste. I found the Orh Ni (yam) nian gao skin a tad thick though, but the Durian one was just right. 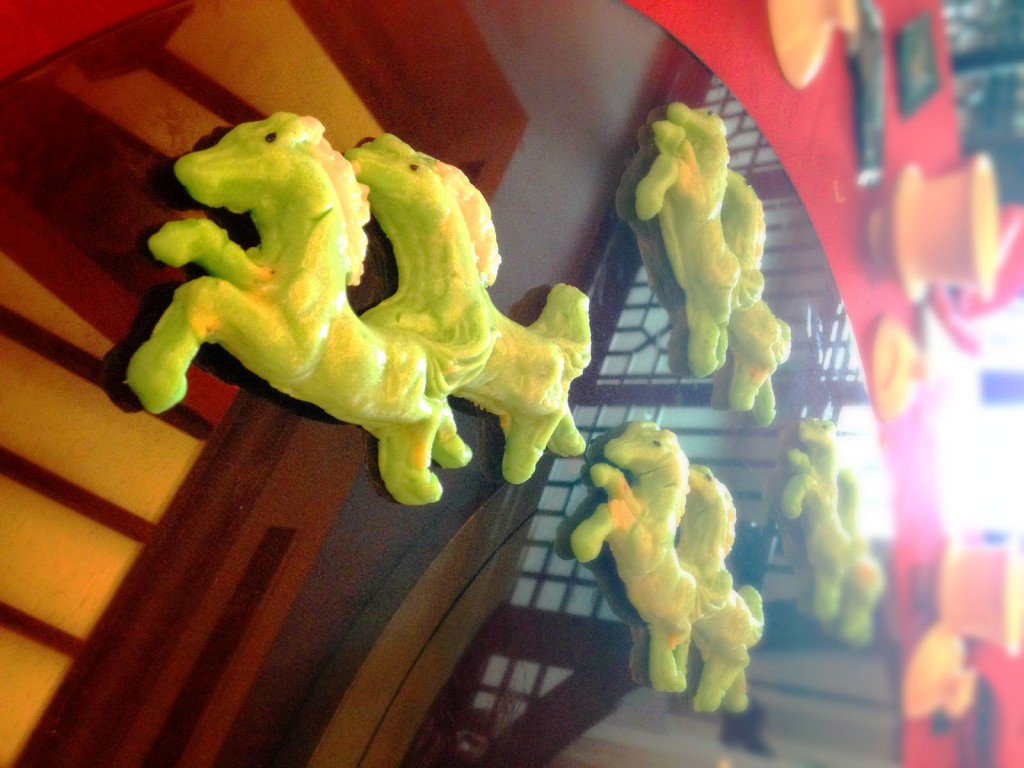 A luxurious Chinese New year menu, some of the items at Peony Jade tend to repeat the same premium ingredients, which is what you should look out for when picking from this a la carte menu. The roasted meats offer unique flavorings though which is something to try.

Most of the dishes will definitely wow your guests like the Gold Ingot, and if you really love raw fish or are a cat in your past life, the Horse-shaped Yu Sheng is right up your ally. Although pricey, the ‘Mao Shan Wang’ Durian Nian Gao is highly recommended as well.

What is sorbic acid, is it safe, and why was it...