The Bedok North Market & Food Centre at Blk 216 is an old favourite of mine. It’s right beside the newly renovated Bedok Public Library and polyclinic and houses a ton of good food, like kway chap, rojak and carrot cake. 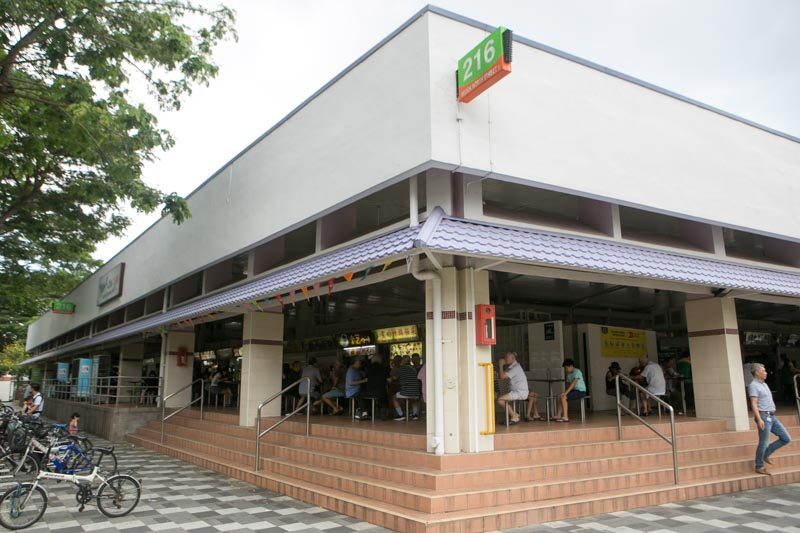 It is precisely because of how mature this estate and hawker centre is that such a young and hip stall like Prawn & Mee stood out so much.

When I walked by, Radiohead and Maroon 5 played from its speakers. Not to mention, it was helmed by two hardworking young men who looked to be around my age. I swear, I’ve never connected with a hawker stall this quickly. 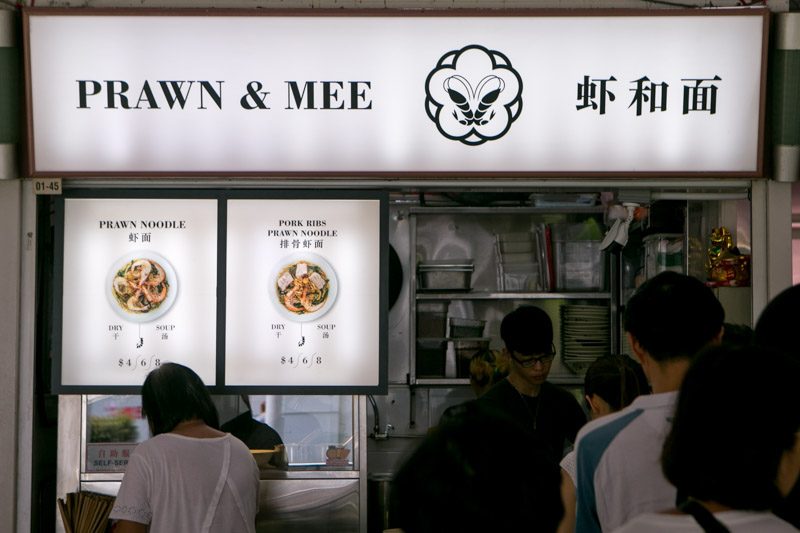 Prawn & Mee was founded by Raphael Sim and Gladwin Yap, who are both 29-year-old hawkers. The stall, previously known as Plum & Rice, used to sell fusion Japanese food, but Raphael and Gladwin decided to rebrand the stall in 2017 and sell prawn noodles instead.

Why? Prawn noodles are more traditional and cater to everybody, including elderly aunties and uncles that frequent the hawker centre. 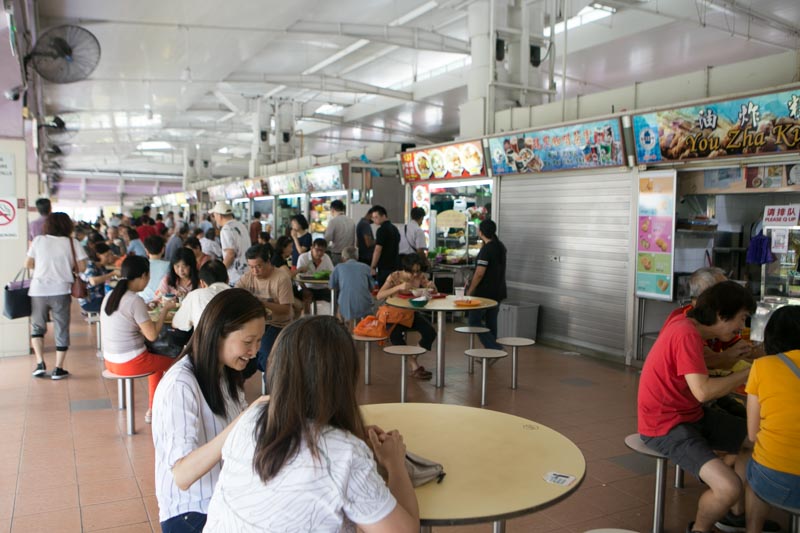 Bedok North Market & Food Centre is huge. L-shaped with multiple aisles running along each column, I had to trawl through a few aisles before finally finding Prawn & Mee.

FYI, just so you don’t have to spend five solid minutes weaving through the aisles, Prawn & Mee is along the row of shops facing the Bedok Public Library. Good news for all you millennials who don’t like to peel your prawns — Prawn & Mee peels them for you! 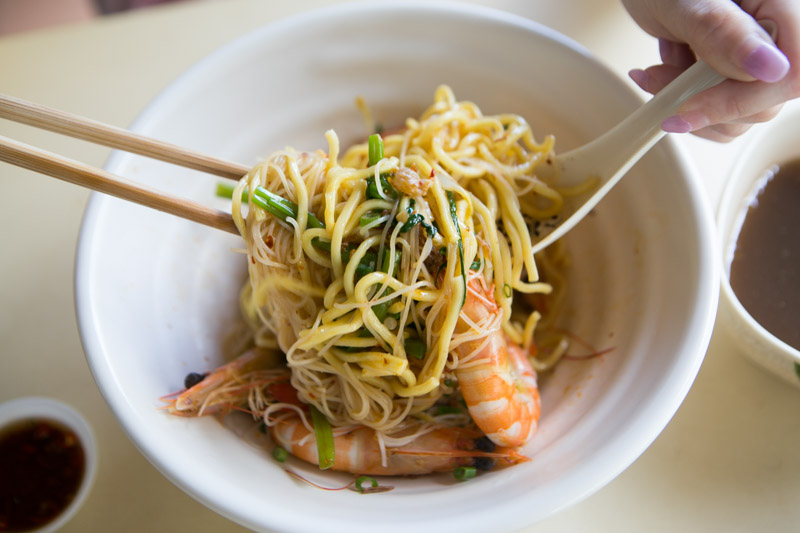 There was plenty of kang kong in my Prawn Noodle (S$6, dry, spicy), which was a huge plus in my books. When I mixed the noodles further, I noticed that Prawn & Mee’s dry prawn noodles used chilli sauce rather than chilli powder.

This made it easier to mix, and I didn’t even have to add any soup to my dry noodles. At the same time, I was a tad apprehensive that it wouldn’t be as shiok since if it had chilli powder instead, it would be smoky, intense, and hot. 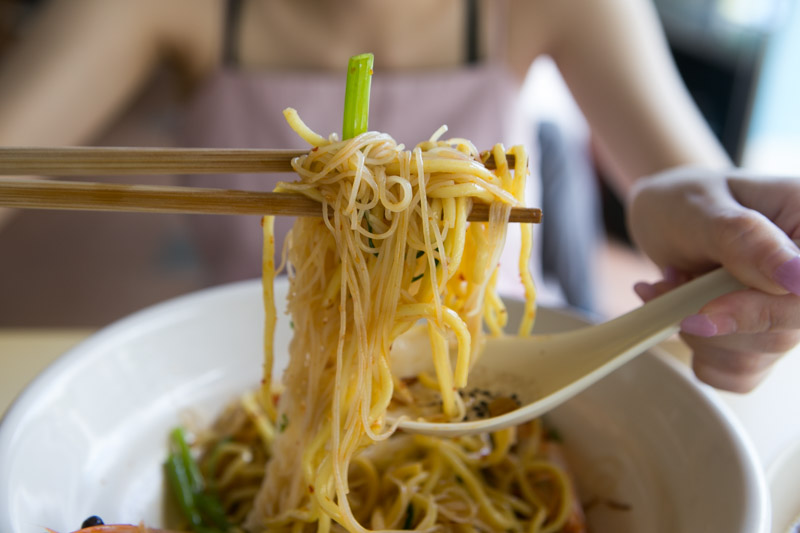 The prawn noodles resembled aglio olio in the way that it was slippery and smooth, partially because of the chilli sauce and the bits of pork lard that were thrown in for good measure.

When I slurped the noodles up, I was surprised at how sweet it was. It reminded me of the sweet brown sauce you’d get with yong tau foo. The spicy kick came at the end, which was refreshing. Prawn & Mee uses pacific white shrimp, which are known for their sweetness and firm texture.

Indeed, each prawn was really fresh and its skin was taut. When I bit into it, the prawn snapped instantly. 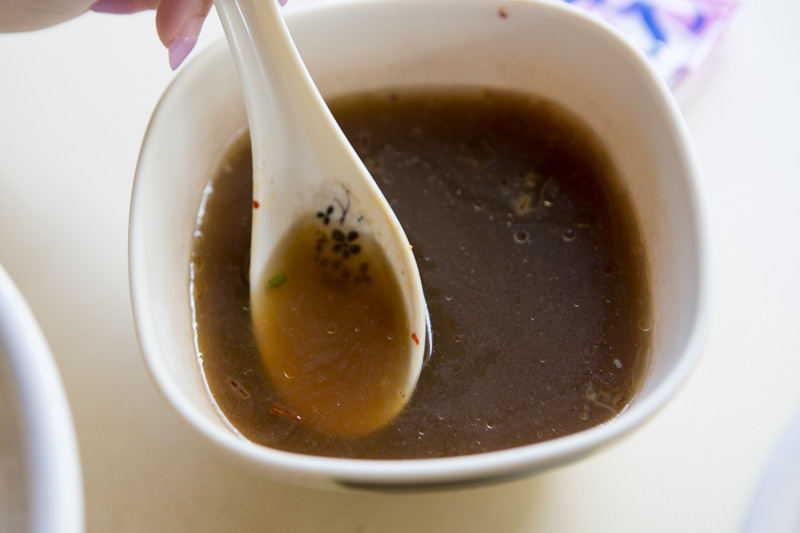 The soup was one of my favourite parts of the meal. Full-bodied and smoky, the soup was briny and sweet with a rich umami flavour.

While I usually use the soup to make my dry prawn noodles a little wetter, this time, I ended up drinking the soup on its own — it was that yummy. Moving on to the Pork Ribs Prawn Noodle (S$6, soup), this had a generous sprinkle of chives on top and came with large, square pieces of pork belly and two big pieces of prawns. 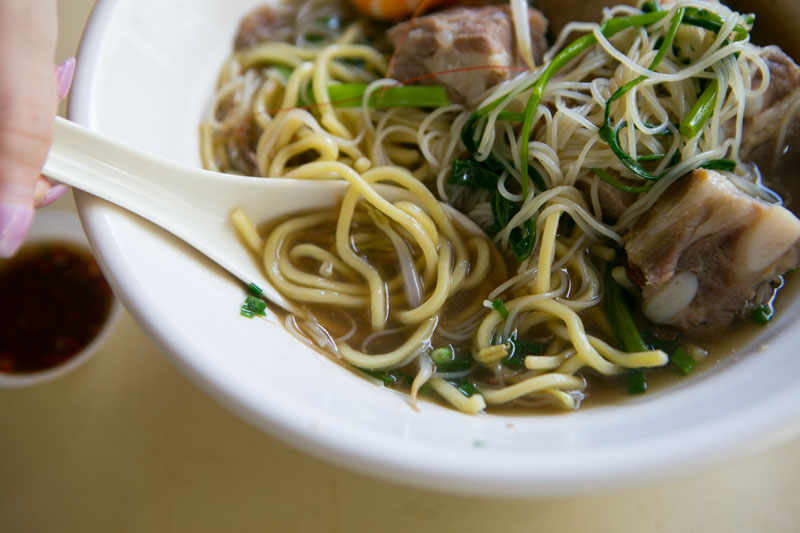 I learnt from Raphael that the soup is boiled overnight with pork bones. They also use more shrimp in the process, resulting in a full-bodied stock that’s richly packed with briny and umami flavours.

The soup version was a little different from the soup provided in the dry counterparts and was more flavourful and sweet. It had that tinge of hearty savouriness from the added pork bones. The pork ribs were delightfully soft and though they didn’t fall off the bone, they were tender and sweet, and it took me little to no effort to bite through the meat.

There was also a fair bit of bones and soft bones in the pork ribs, so be prepared to work your way through each piece!

Throughout the entire time we were there, the queue at Prawn & Mee never seemed to end. Every time I looked up, there’d be a mix of aunties, uncles, students and working adults queuing for a bowl of hearty prawn noodles.

What I loved about Raphael and Gladwin’s rendition of this local classic was how simple it was. It wasn’t fancy; it didn’t have lobsters or giant prawns, but it was honest, humble and delicious. The fact that it’s cooked by two 29-year-olds is just a bonus, really. No wonder folks from all walks of life patronise this stall!