Most people who know me are probably already aware of my obsession over coffee. My belief is that coffee has more to its conventional use of inducing that morning boost and is an under-appreciated form of art in Singapore, where people often associate it as a superficial culture.

As such, I’m always on the lookout for new coffeehouses to expand my knowledge on the infinite characters and types of coffee to deem fit as a coffee connoisseur. 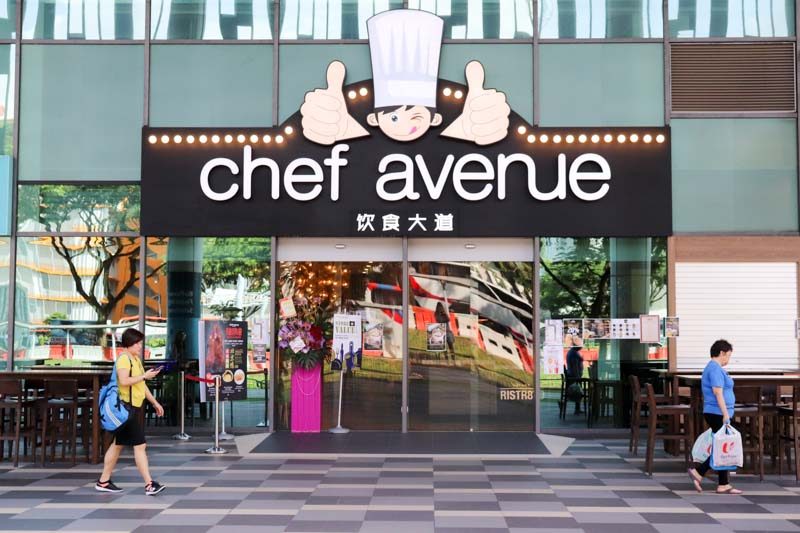 When word got to me that Ristr8to surreptitiously opened at Chef Avenue Food Court amongst the block of offices in Tai Seng, I instantly cleared up my schedule to pay a visit.

You probably think I’m exaggerating but let me explain. The acclaimed cafe was started by 2017 World Latte Art Champion Arnon Thitiprasert and brought all the way over from Chiang Mai.

Not only did I need to see this intricate form of art happen live, I also wanted to taste what set them above from the others. 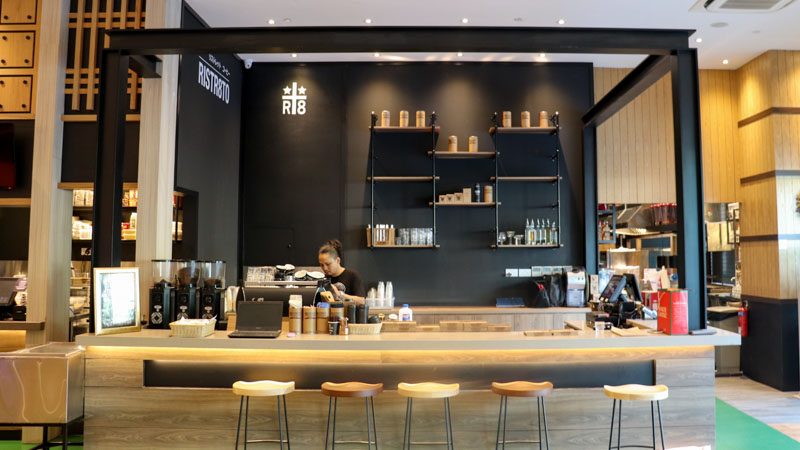 Once I walked in, it was clear how Ristr8to was visually different amongst the chain of food stalls. The open-concept coffeehouse adopted a rustic, wooden theme which exuded a pronounced boldness. However, it did seem a little out of place and almost exclusive.

You might get lost just finding the place but I promise you, it is absolutely worth a visit. 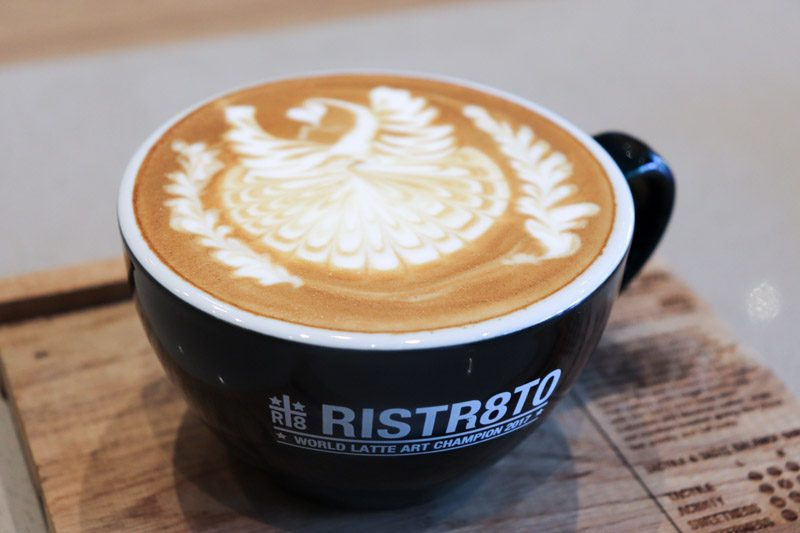 Now, ladies and gentlemen, I present to you the award-winning Satan Latte (S$5), and the one drink that simply cannot be ‘to-go’. All drinks were served on the custom-made oak boards, which really amplified its merit. 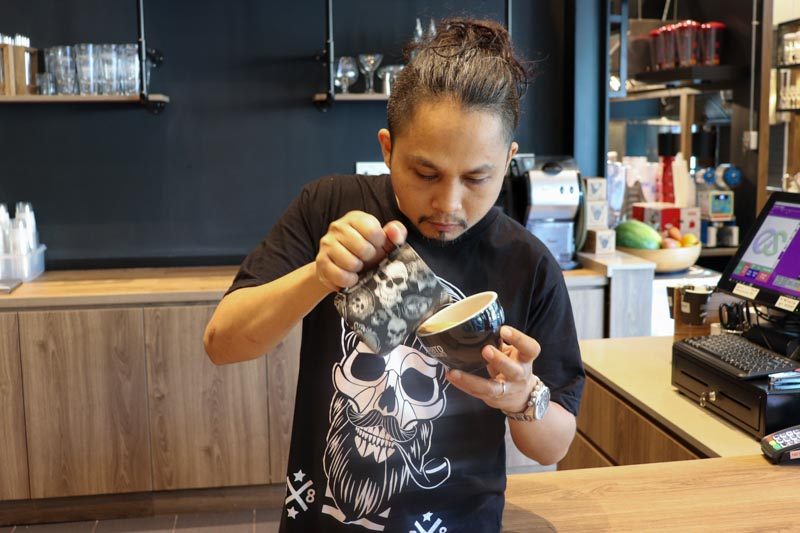 Here’s a tip: get your cameras ready for this one because the final product isn’t the only thing worth snapping. My biggest regret is not taking a video to reminisce the meticulous yet alluring process. 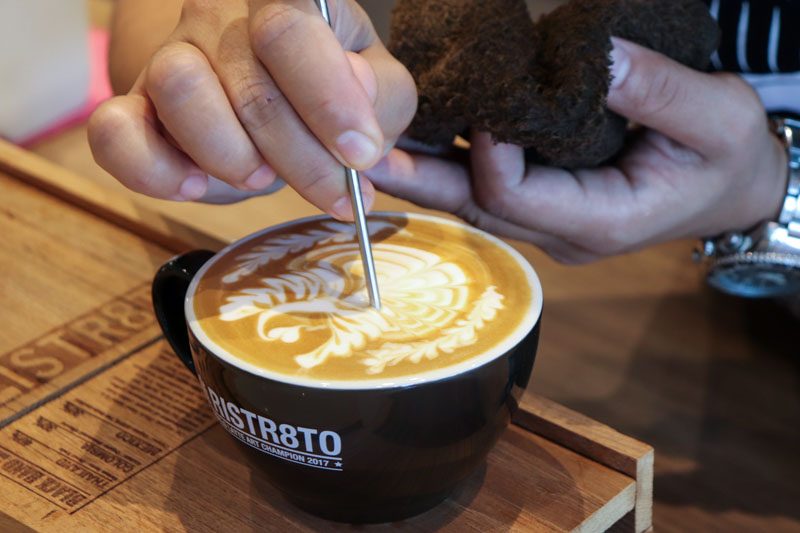 After relishing in the delight of the short yet exemplary process, it was time to be the judge. Said to be the weakest drink of the extensive menu, the blend had hints of Asian coffee notes that was rather comforting.

Additionally, it weighed in heavier on the milk which is great news for those who don’t do so well with caffeine. Not too bitter yet not too weak, the orthodox cup could be easily downed in seconds if you were an avid lover like myself.

After all, the most prominent aspect about the devilish Ristr8to speciality was the esteemed art, and that’s all that mattered. 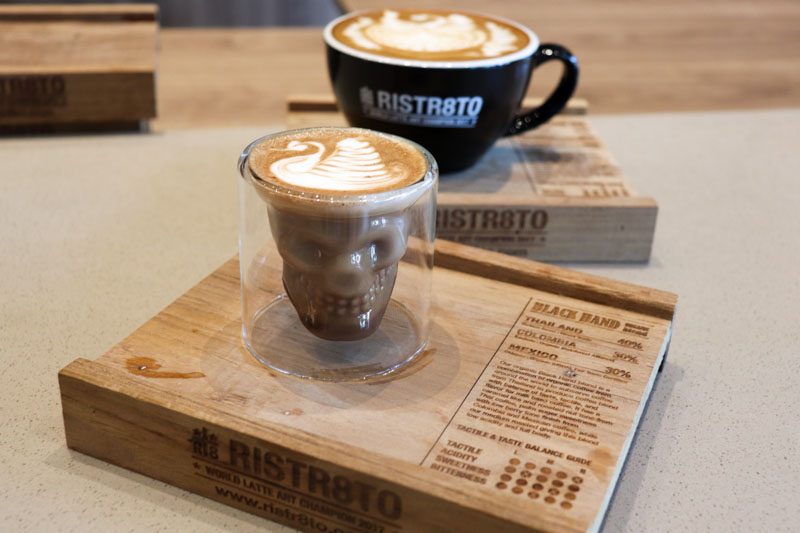 Up next for the ‘gram was the Godmother Mocha (S$5). Made with their secret-recipe Brazillian cacao syrup and a long ristretto shot, the tiny three-ounce skull shot cup proved to be as deadly as it looked.

Packed with a nutty undertone from the cacao, this was no ordinary mocha that appeased chocolate lovers. At five-eighths of strength, its vigour hits you immediately.

Perfectly balanced out with the candied edginess from the cacao, I’d recommend this for those rushing off to work, yet in need of that morning perk. 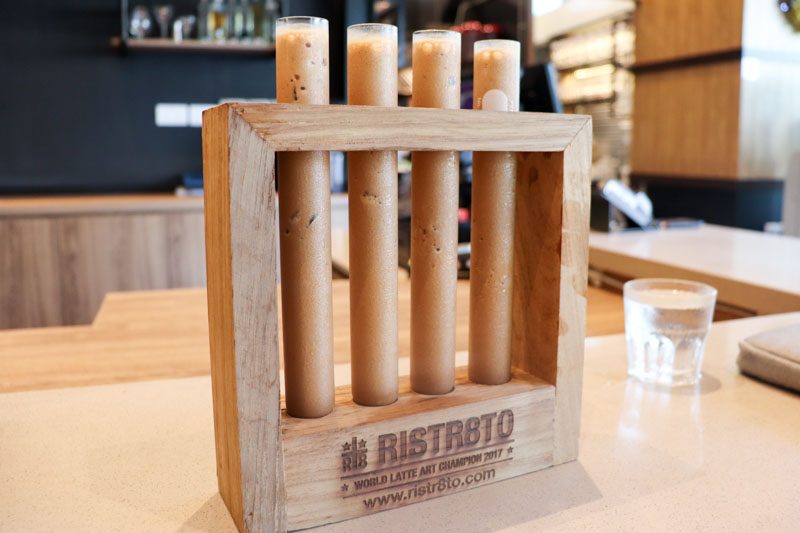 Spontaneously, I decided to get Shakerato From Hell (S$6). Yes, I’ll admit that I ordered this because of the Instagrammable cup and its fancy name. I mean – coffee in test tubes? Yes, please!

The iced drink was a blend of two espresso shots, secret recipe Brazillian cacao syrup and milk, then blended with ice. Don’t be fooled into thinking this was to be shared amongst a party of four; two sips in and there goes one polished test tube. While it was delectable, it didn’t quite satiate me. Masked by the milk and ice concoction, it wasn’t the best drink to showcase their coffee supremacy. I suppose it could be favouritism on my part towards more pronounced character in coffee blends.

Then again, I am a sucker for anything that was Insta-worthy, and this definitely glamourized my feed. 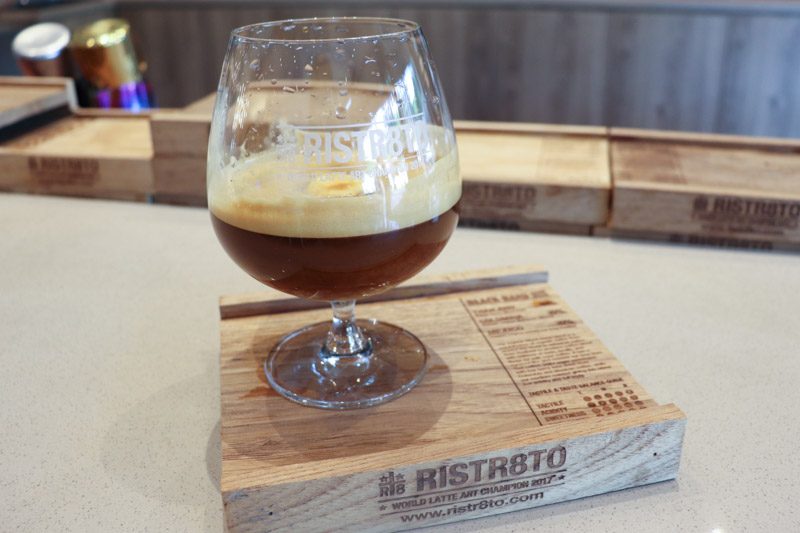 Finally, Sex On The Rock (S$6). Here’s one I never planned to order but was highly recommended by the real coffee connoisseur, Rafi. The cheeky orange cake-based dessert coffee was a seductive medley of flavours, served in a Cognac cup.

Sweet, sour, salty and bitter all in one – this drink left me speechless. I was so smitten by how the unsuspecting drink activated my entire palate. The zesty concoction had a refreshing taste that lingered from start to finish. Intertwining the tangy orange zeal with the floral kick from the lychee syrup, the drink showed distinct citrus notes.

Combining that with double ristretto, the tang from the fruits rounded the sharpness of the caffeine to produce this drink that was the clear diamond of Ristr8to, that needed to be unearthed. 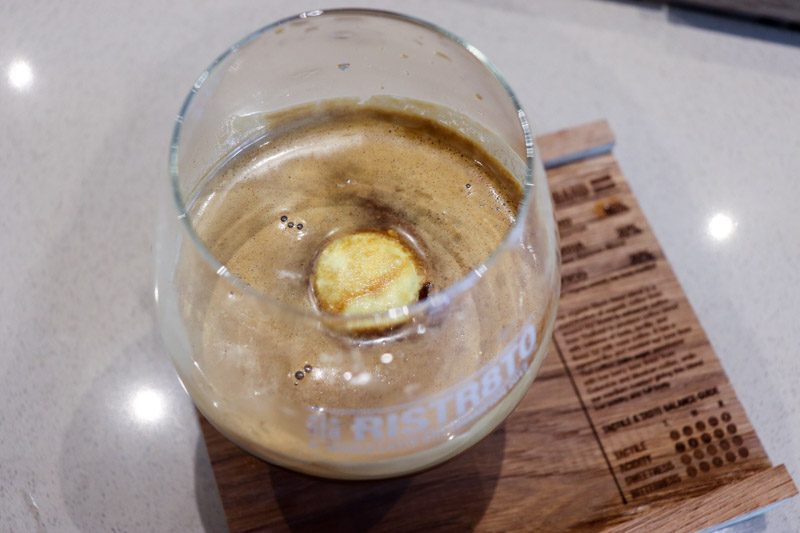 The vibrancy of the drink was undoubtedly my favourite of the morning and dare I say, it should definitely receive equal attention if not more, than the Satan Latte.

It most certainly isn’t one of those cafes you visit once and never come back. New to the country and still in the midst of finalising matters here, I can confidently say in due time, Ristr8to will receive the attention it deserves.

You could say the beverages here had somewhat of an alcoholic influence and one could definitely get drunk on the wicked drinks at Ristr8to.

And just like the power of alcohol, you’ll just keep coming back wanting more.