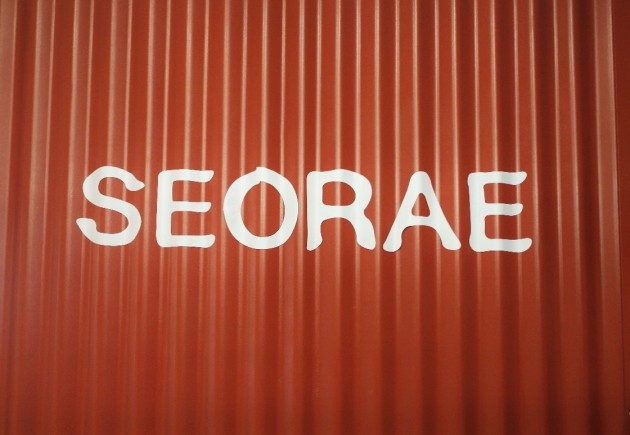 “Back to the Basics”. This is a philosophy the founder of SEORAE Galmaegi, Chef Chul Park has stood by throughout his venture into the Korean BBQ sector; by using elementary grilling methods whilst providing quality foods. Under the watchful eye of Chef Chul Park, SEORAE has made its name in many parts of the world including Tokyo, Beijing and its own hometown Seoul.

The recipe for this restaurant’s success is simple: Galmaegisal. 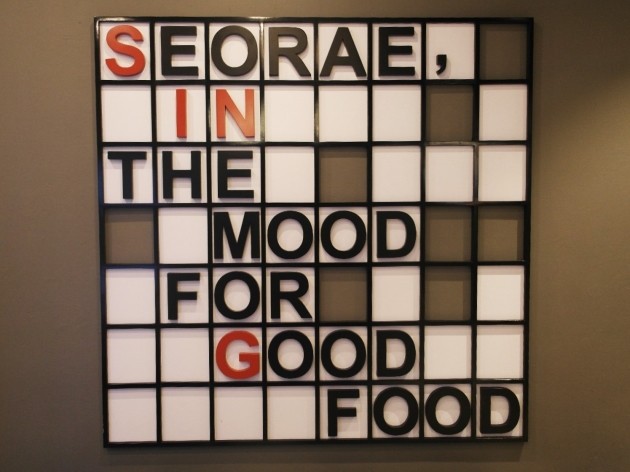 Galmaegisal is a unique part of the pig between its ribs and belly which used to be served seoul-ly (haha) to the Royal Family of Korea in ancient times but Seorae now takes pride in making this special cut of the pig accessible to all of us mere peasants. This first of its kind Galmaegisal Korean BBQ restaurant has now made its way to our lovely Korean-BBQ-adoring island and has slowly been gaining a loyal following. 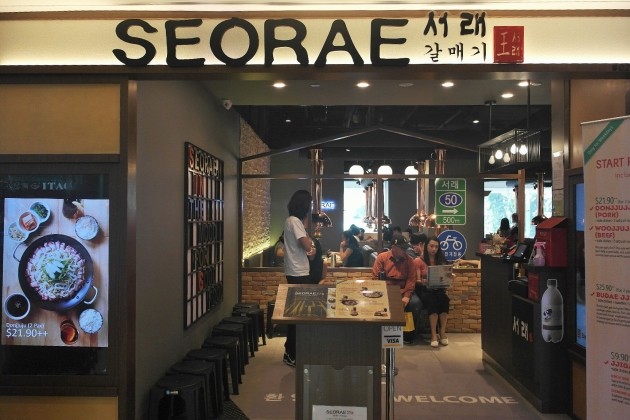 Stowed away on the second floor of Plaza Singapura, SEORAE may come across to the ordinary passer-by as a slightly nondescript or rather, as a typical Korean restaurant. That may be so but good surprises await those that take a bold step in. One thing to note about the entrance of this place is the row of black stools that allows customers waiting in line to rest their weary legs. Thoughtful design, no? 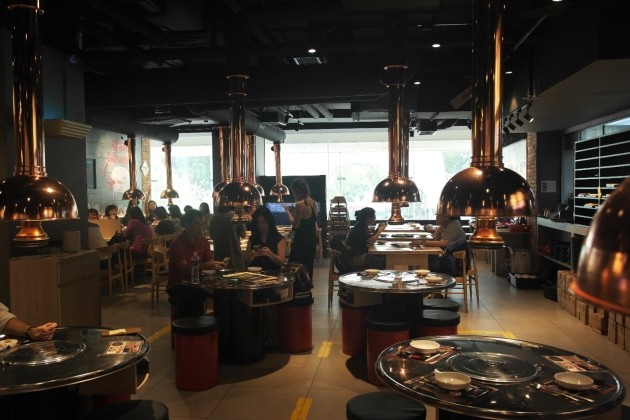 Upon entering the place, one would find the interior is not very brightly lit and most of the light floods through from the long window as pictured above. The natural lighting helps with the food photography so that’s a bonus there I suppose.

The tables are nicely set apart and the seats are snug so there are no complaints there. Additionally, the round red and black seats around the metallic, circular tables are really hollow, cushioned cylinders so you can keep your shopping bags or bulky items in it. Before any of the meats arrived, we were served the ban-chan side dishes which comprised mainly of healthy greens. As a person who shies away from anything green and healthy, I was not too thrilled to be greeted by this sight. But boy, did I misjudge. Pair these ghastly greens with the barbequed meats and be far from disappointed. 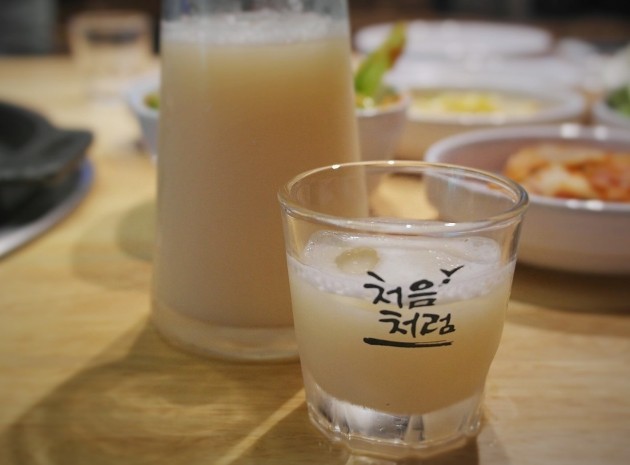 We were served Yakult Soju to help us settle in before the actual meal began and it was quite a delight. The Yakult Soju ($15.90) tasted like watered down yakult, but in a good way. It was sweet, had a subtle hint of soju and a yogurt tang to it. It was really quite a refreshing shot and something I’d definitely recommend to anyone looking to try something new. The first pork skirt meat that was served to us was the Galmaegisal (Original) ($21.90). When cooked, it was chewy and really quite tasty with the mild Korean spices infused in it. The flavours of the original galmaegisal came through strongly especially when dipped into the accompanying sauces – chili paste, onion sauce and bean paste. One thing I found interesting about Seorae and the galmaegisal they offer was the fact that their BBQ cooking pits have a trough encircling it in which Fried Kimchi, Steamed Egg and Melted Cheese (Top up $2 for cheese) remained hot and cooked alongside the meat. Pair your hot, freshly-grilled galmaegisal with the cheese to salt your meat further or pair it with the steamed egg to provide a contrast of texture. 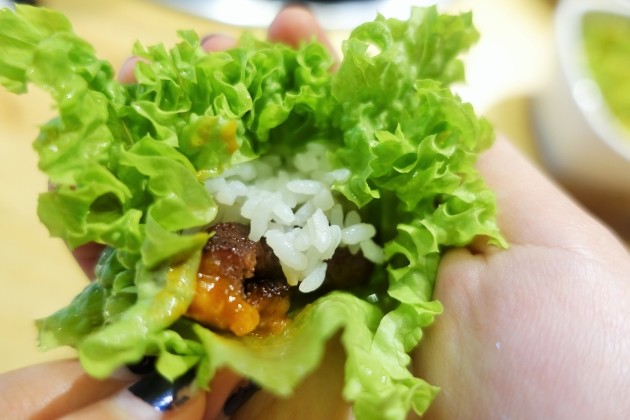 Apart from the steamed egg and cheese, what I like to do with my barbequed meats is swab the cooked meats with a dab of chili paste and wrap it up in fresh lettuce with a crunchy piece of kimchi and some rice. I did this with the galmaegisal (original) and was far from disappointed. The meaty juices of the cooked Galmaegisal paired with the tangy and slightly spicy sides plus the pillow-y rice will be sure to satisfy your every BBQ desire. 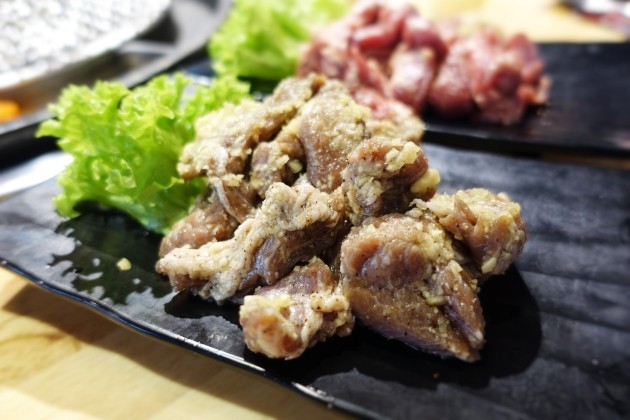 We were next served the Galmaegisal (Garlic Soy Sauce) ($22.90) which was, in my humble opinion, much nicer than the original simply because it was extremely flavourful. At first sight, when uncooked, the Galmaegisal (Garlic Soy Sauce) may look a little unappetizing, or at least it was to me but after being grilled to perfection, there was absolutely nothing I could find fault in it for. 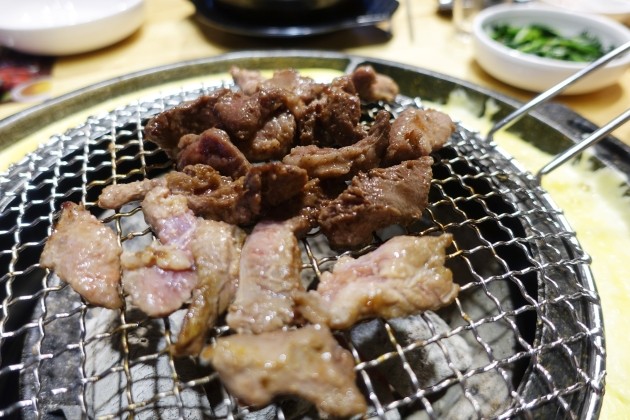 When cooked, the Galmaegisal (Garlic Soy Sauce) was wonderfully juicy, both sweet and savoury and extremely tender which really helped to accelerate me into a blissful oblivion. The chunks of Garlic-Soy-sauce-marinated galmaegisal were so scrumptious I could have finished them all without having to pair them with anything. When I first tried dipping my beloved garlic-soy-sauce galmaegisal into the pit of melted cheese, I felt as though I was going through an initiation and was transitioning from a Seorae stranger to a Seorae lover. Not to be too dramatic or anything like it, but the galmaegisal (Garlic Soy Sauce) was beautiful on its own, but eaten with the soft salted cheese, it was heavenly. Apart from barbequed meats, we were served a few other side dishes one of which was the Sundubu Jjigae (S- $14.90, L-$18.90) or as we Singaporeans would call it, Tofu Stew. The tofu stew had a distinct seafood taste which was surprisingly not overpowering and it was nice to see how the stew was generously filled with many ingredients like tofu (of course), minced pork, clams and zucchini. I loved how when the stew was paired with rice, the combination of flavours and textures was glorious. Apart from yakult soju, Seorae also offers other very unique flavoured soju drinks like the one pictured above. Coffee Soju ($15.90). I did not really know how to feel about it when it was first suggested but it turns out I really had nothing to fear. The flavours of the coffee soju blended together alarmingly well with the sweet malty flavours of the coffee and the subtle tinge of the soju alcohol. 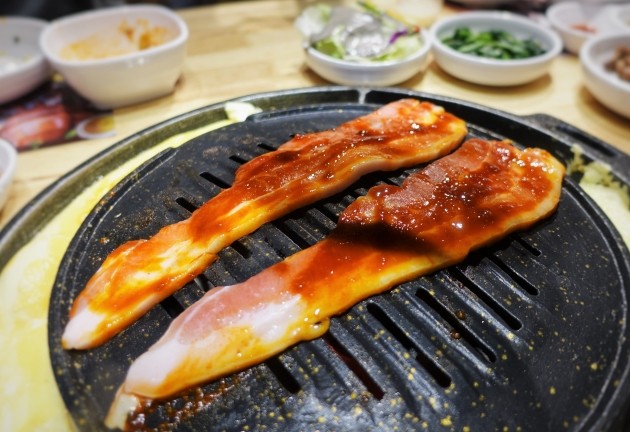 We had the Samgyeobsal in Spicy (Pork Belly) ($19.90) next and it was quite a treat. Marinated in Seorae’s special spicy sauce, the pork belly did have a hint of spice which was rather mild but it did further compliment the meaty flavours of the pork. To enhance the spiciness of the dish which I expected more from, I dipped the supple pieces of pork belly in chili paste and that worked wonders for me. 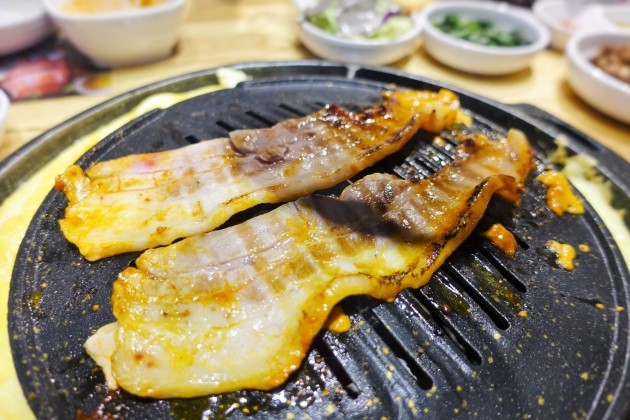 Apart from the mellow spice, the Spicy Pork Belly’s textures worked very beautifully when grilled. The meat was soft and tender from the fatty parts and the slightly charred parts gave it a smoky flavour which I enjoyed quite a bit. 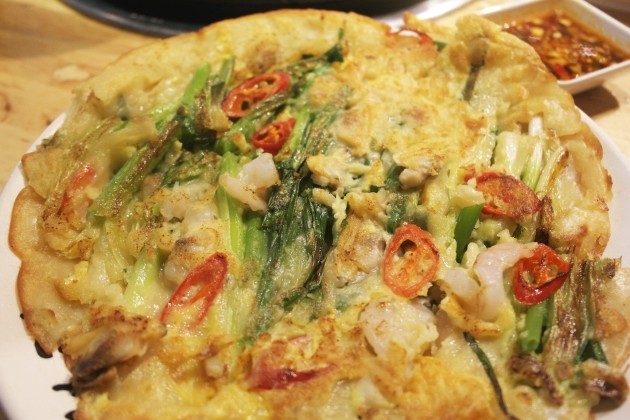 Another non-BBQ dish we tried was the Haemul Pajeon ($18.90) which is essentially korean pancake with green onions and seafood. It was stuffed with chunks of green onions which I was not particularly fond of so I did not fully appreciate the generous portions of fillings in the pancake.

I usually opt for kimchi pancake, which is more spicy, more kimchi and less vegetables. But nonetheless, I still liked how the flavours came together rather nicely with the creamy fried pancake. 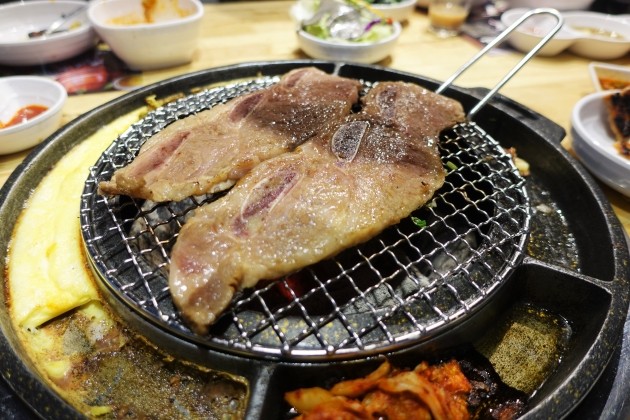 One absolute favourite of mine was the LA Galbi (Beef Ribs) ($38.90)! This harmless-looking slab of meat performed wonders in my mouth. When cooked, the beef ribs burst. 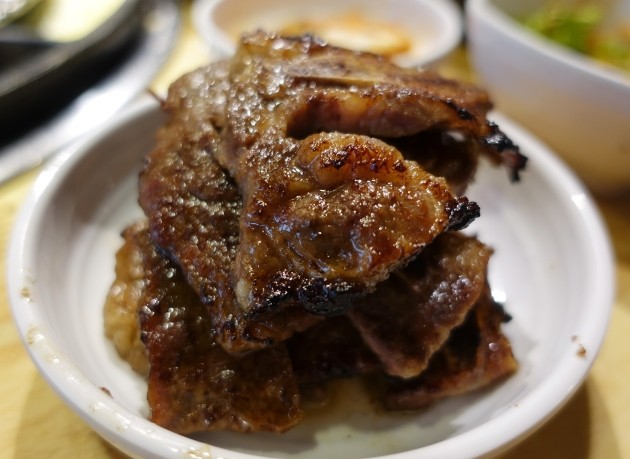 Just look at how fantastically succulent the LA Galbi looks. The last barbecued meat we had was the Woosamgyeob or Beef Belly ($24.90). I was not a particular fan of the beef belly mostly because the flavours of this meat dish somehow paled in comparison to the extremely savory LA Galbi which we had right before this dish. 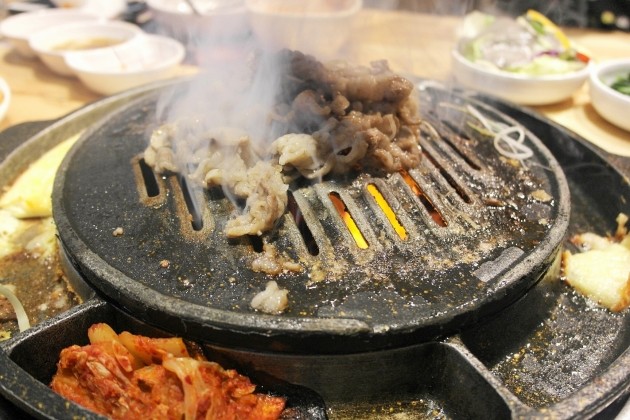 Although the Woosamgyeob did not take my taste buds captive, I did like the fact that the pork belly was very soft and easy to chew and the meat had a nice herbal taste to it which was mild but still rather lovely. If you are looking for something that is not too heavy and a little milder, I would definitely recommend the Woosamgyeob. 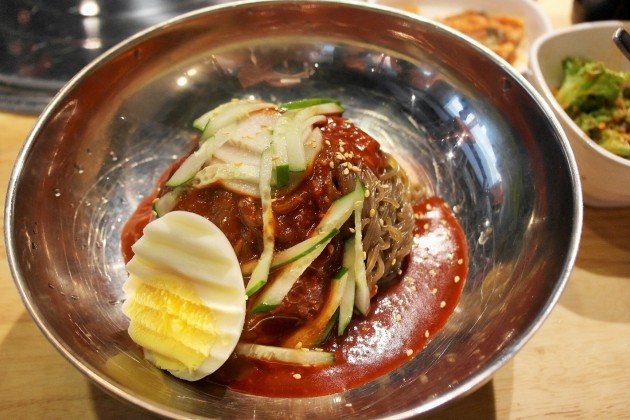 The last dish we had, which ended off our feast-like meal was the Bibim Naengmyeon (Cold Noodles) ($15.90). This was a rather hearty noodle dish with its generous portion of cold, glass noodles and the thick dollop of chilli sauce peppered with sesame seeds.

The shreds of cucumber were rather refreshing and they provided a nice balance of textures to the entire dish. I really appreciated this dish as it was delicious and acted as a sort of breather to all the meats we tried. 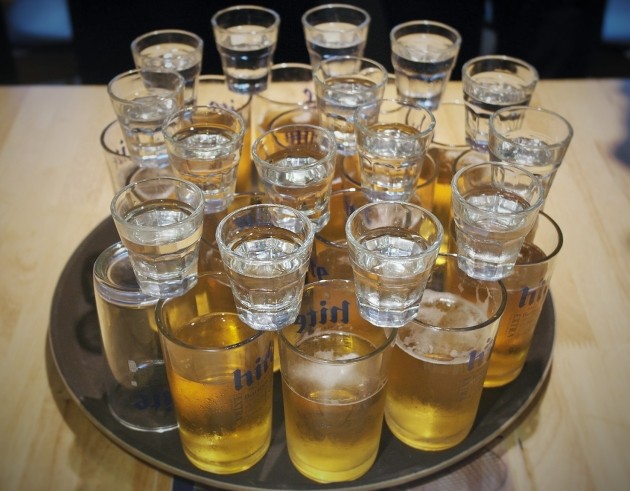 To celebrate our kingly meal, we reveled in the excitement of Soju Bombs , something I have always adored. This intricate soju bomb setup was laid in a chain to collapse like dominoes. 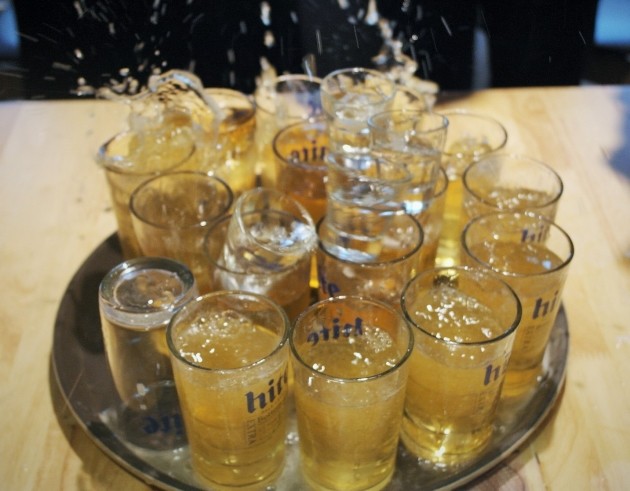 Soju and beers… Can’t think of a more refreshing way to end off the meal.

Ah, but wait, it’s not all over yet. There is something more exhilarating…… Bingsoos! This exquisitely divine Korean dessert has gained the likes of many locals and with good reason. I was thrilled when I learnt we would have some bingsoos ourselves to really top things all off. We were first served the Apgujeong Bingsoo (Cheese) ($14.90) which was interestingly cheese-flavoured.

While I could not taste much of the cheese, I loved how this bingsoo tasted marvelous with the wafer-flavoured crumbly bits mixed in with the soft shaven ice. The soft cheesecake chunks also helped to balance out the textures beautifully. 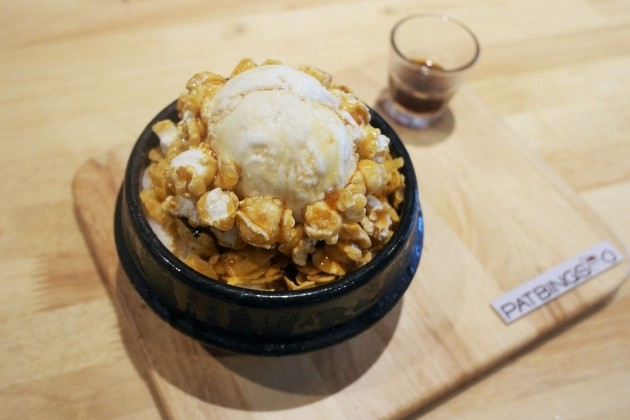 While I recognise that the dishes, especially the BBQ meat ones, at Seorae are rather costly, these dishes are to be shared. Either way, they will not disappoint in the taste sector and will most positively satisfy. Trust me on this one.

If you do need another factor to convince you, let’s count the fact that Seorae offers uniquely-flavoured sojus like Yakult and Coffee, which were far from strange and really quite tasty. They also have interesting bingsoos that were as scrumptious as they were good-looking.

Simply spoil yourself one particularly (metaphorically) rainy day and come enjoy some Galmaegisal over a few soju drinks at Seorae!