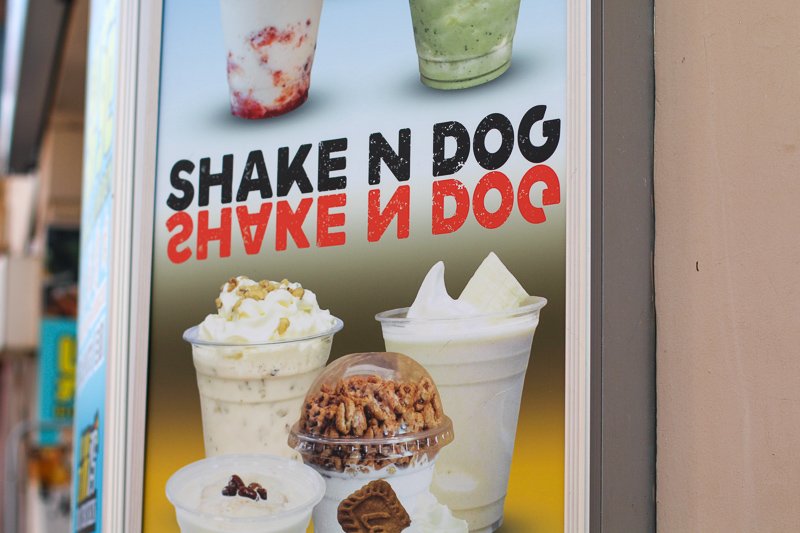 If you’re looking for a good ol’ hot dog, then make this the first place to go to satisfy your cravings. Shake N Dog is a family-run hot dog and milkshake business set up by Mr and Mrs Park in the heart of Singapore at Chinatown. 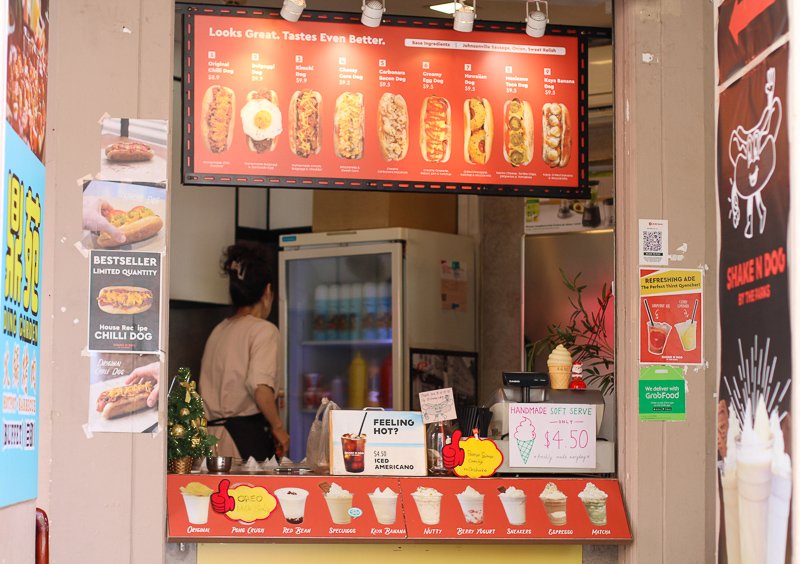 The store is located strategically in front of a T-junction that’s just opposite of Chinatown MRT station, which makes it super noticeable. The striking red banners also makes the shop impossible to miss.

The hot dog variations they offer are mostly inspired by Mrs Park’s personal recipes, which are all close to her heart. The Park family prides themselves on using only the freshest ingredients, especially for the most important of the hotdog: the bratwurst. The hotdogs are sold with Johnsonville bratwursts, which is currently the number one sausage brand in America. 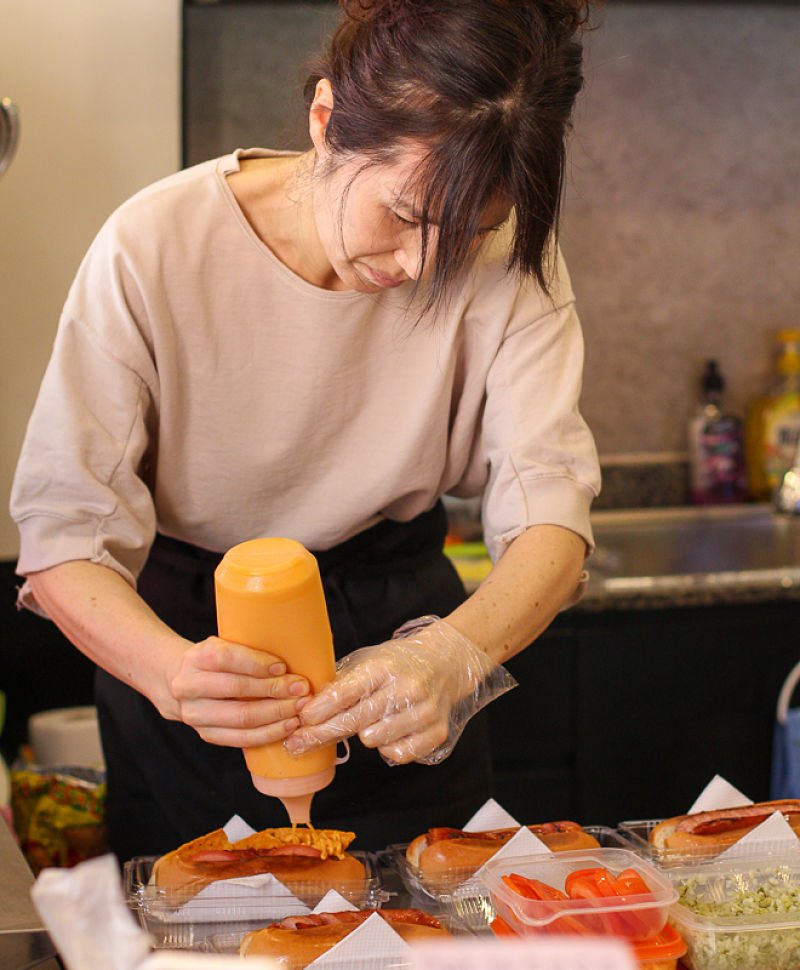 When I dropped by, Mrs Park was the only one manning the store. I was quite apprehensive about ordering too many items, worrying about whether she would be able to handle all the orders at once. However, being the professional that she is, she seemed perfectly calm cooking up the orders.

We decided to get four different variations of the hotdog as well as four shakes, to get the full experience. 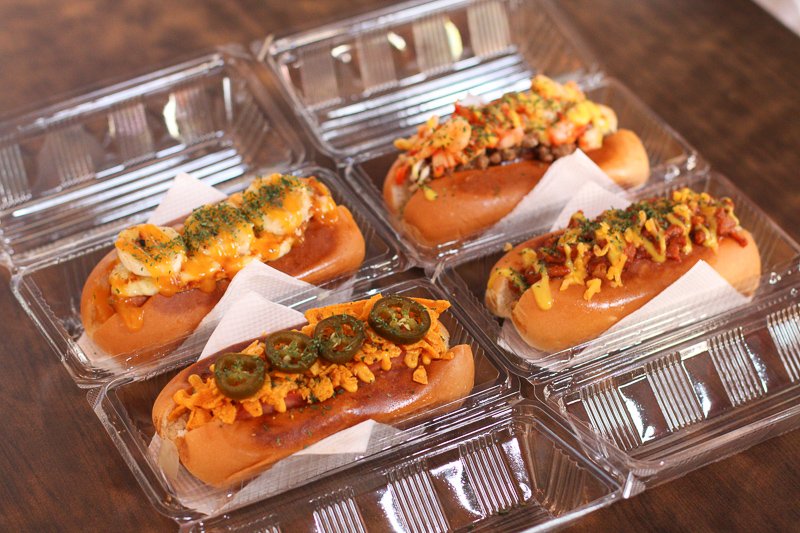 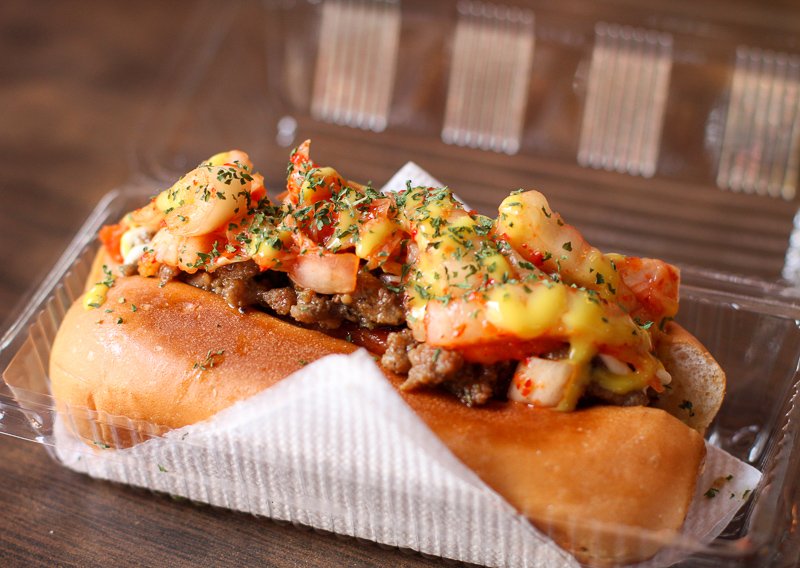 My favourite out of all hot dogs was the Kimchi Dog (S$9.90). The spice and tang of the kimchi balanced out the grilled and smoky flavours of the bratwurst perfectly. The bun was also toasted till slightly charred but still retained a fluffy texture inside.

This hot dog definitely reflected the Korean influence from Mrs Park’s recipe, creating a unique take on the basic Western hotdog. It was such a delight sinking my teeth into it! 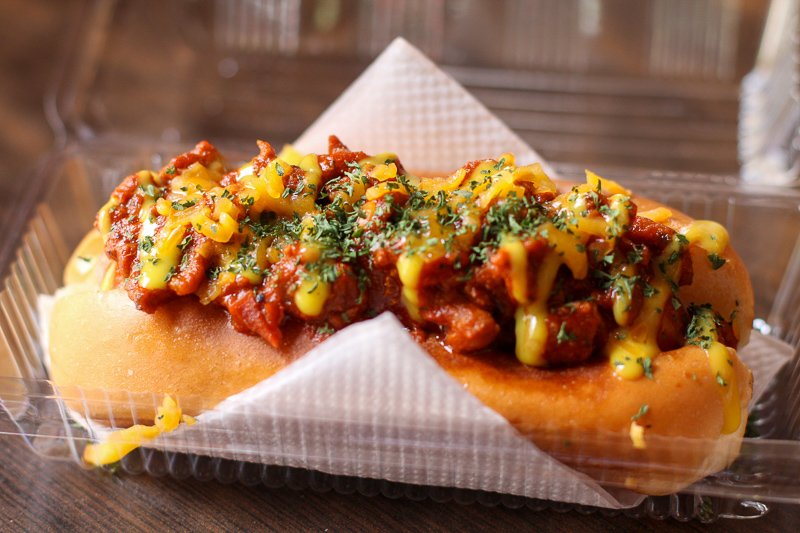 The other hotdog that we thought we should get was the Original Chili Dog (S$8.90). We simply had to try this simple, no-frills chilli hot dog before trying the other more intriguing combinations at Shake N’ Dog.

Atop the bratwurst was a generous spread of chilLi con carne which is essentially a spicy stew containing chilli peppers, meat and sometimes tomatoes and beans. In this case, it was solely chilli peppers and minced beef. The minced beef was quite tender and the stew was simply heartwarming. For our third hotdog, we chose something that was closest to Mrs Park’s heart, the Mexican Taco Dog (S$9.50). Mrs Park shared with us that she particularly liked this dish, personally recommending us to try it out. 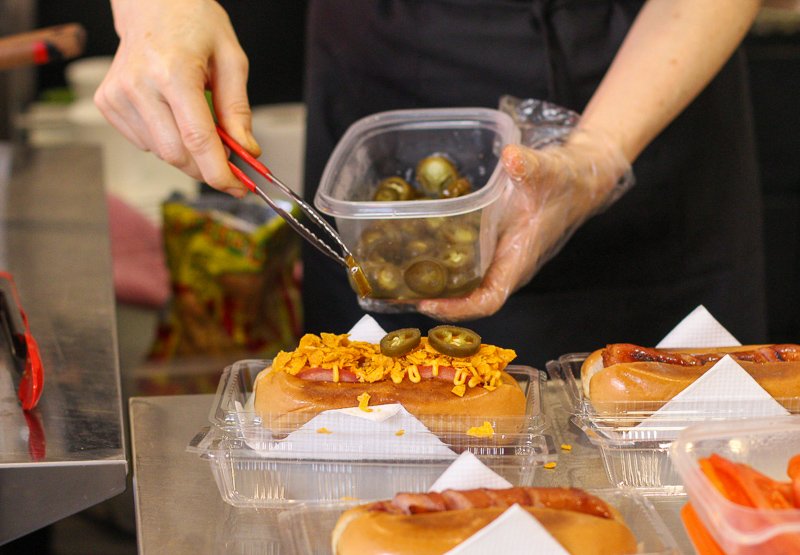 Crispy nacho chips and nacho cheese sauce topped the bratwurst, giving a nice crunch and creaminess to the hotdog. The jalapenos placed over the nachos really added that extra Mexican touch. 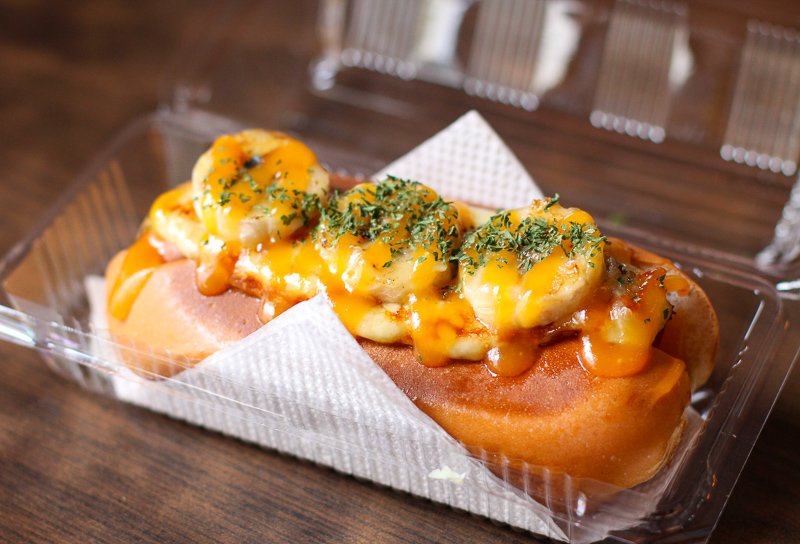 What’s a meal without a dessert? To wrap up the meal with something sweet, we decided to get the Kaya Banana Dog (S$9.50). Initially, I was quite sceptical as to how it would taste because of the contrasting flavours, but to my surprise, it was quite pleasant. In fact, the grilled cheese really helped to bring the savoury and sweet flavours together. Besides the different variations of hotdogs, Shake N Dog also offers a great number of milkshakes to wow us with. Out of all the options, we settled for four flavours we liked—Original, Speculoos, Berry Yoghurt and Matcha—all of which are priced at S$7.50. 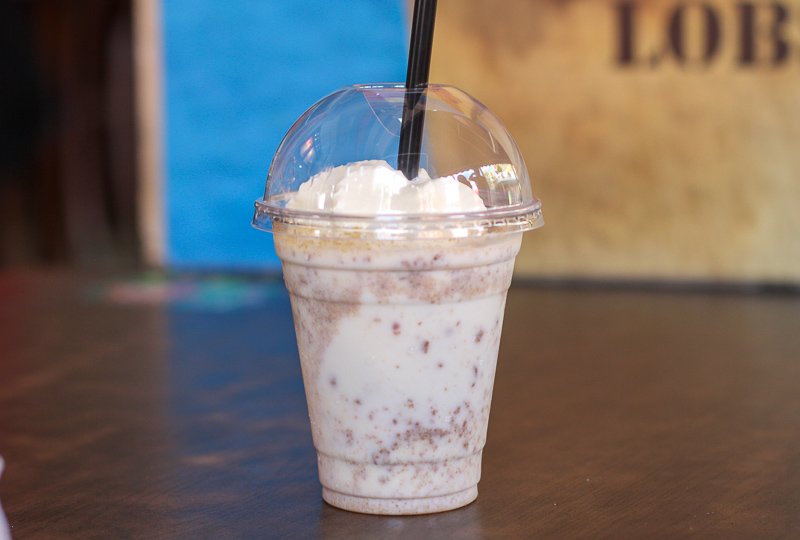 Speculoos is a type of spiced shortcrust biscuit which has, in recent times, become a favourite topping for almost any sort of dessert.

Here we have the Speculoos Shake (S$7.50) which is a rich and creamy shake mixed with a generous amount of crispy crushed speculoos. The drink was absolutely delicious and I personally feel like it would do well as ice cream too. 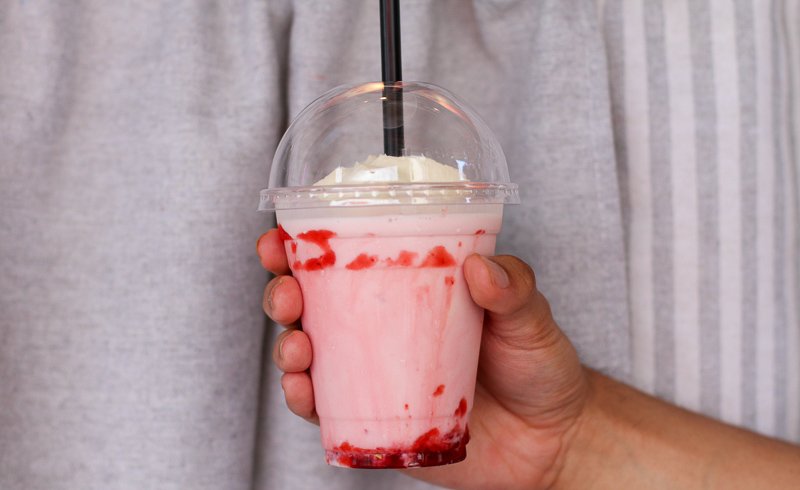 The other drink that we got was the Berry and Yoghurt (S$7.50) which had a slight tart flavour to it from the berry puree. Compared to the other shakes, this was definitely my favourite because it had a tad bit of sourness and wasn’t completely sweet.

This shake really reminded me of my childhood favourite strawberry milkshake from McDonald’s. If you’re a fan of the shake at McDonald’s then you’d probably really enjoy this one. 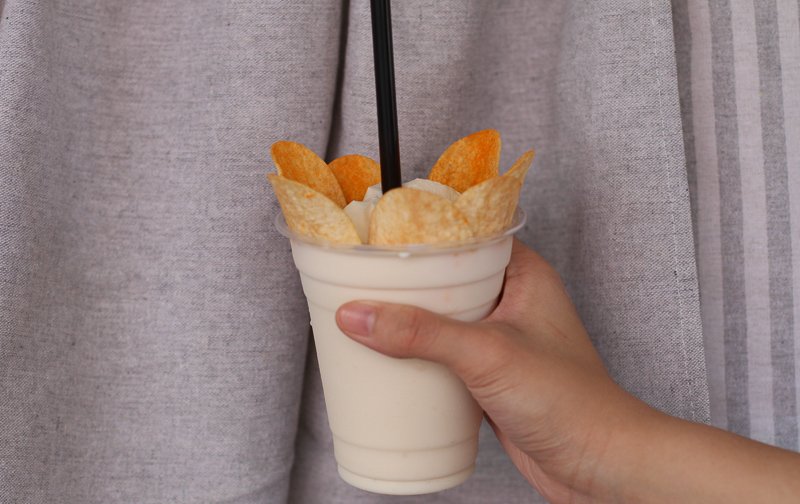 We also got the Original Milkshake to see how the original flavour fared. The milkshake was just as creamy and luscious as the rest but the secret was in the chips crowning the sweet milkshake.

The sweet and savoury flavours really complemented each other, and fans of vanilla milkshakes will enjoy this. 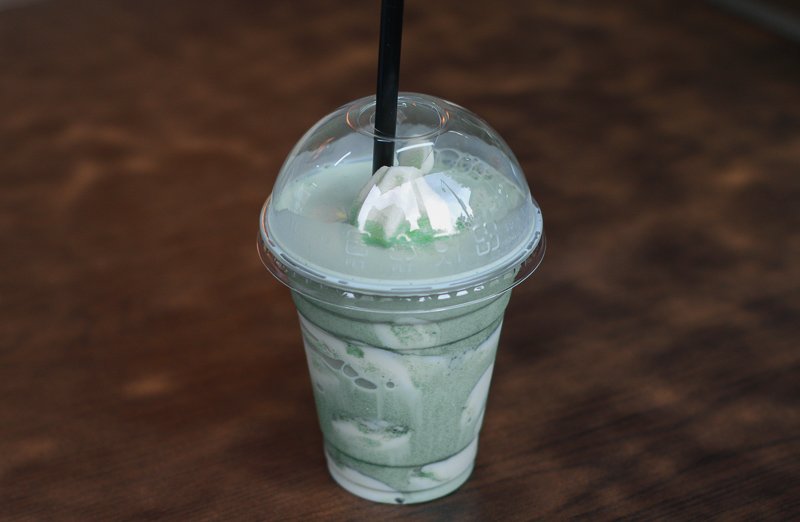 We also decided to get something a little more Asian, so we tried the Matcha Shake (S$7.50). The matcha was quite potent, mixing in earthy notes with the creamy shake. I’d certainly recommend this if you enjoy matcha desserts!

All the hotdogs from Shake N Dog were absolutely delectable but considering the price, I feel like I’d only grab it when I feel like splurging. Other than that, if you’re in the vicinity of Chinatown, it’s time to treat yourself to these mouth-watering hotdogs made from Mrs Park’s recipes!

Previous articleUltimate Guide To CNY 2020: 30 Dinner Spots To Usher In An Auspicious Year Of The Rat
Next articleHaidilao Marina Square Opens Their First AI-Powered Outlet With Robotic Waiters