A bowl of warm, delicious, and hearty soup is what I crave for during chilly weather, or when I’m feeling under the weather and need a pick-me-up. Luckily, the team behind Shun Feng Crayfish Delight provides exactly that — heartwarming bowls of soup made with premium quality ingredients.

Previously near Khatib, Shun Feng Crayfish has since moved to Ang Mo Kio Avenue 1 as of June 2019. A huge pot of broth was simmering away at the side while the chef prepared our individual bowls of soup, each cooked a la minute with ingredients according to your order. The broth — consisting of about eight to nine secret ingredients — has to be simmered for at least four hours before they can be served to customers.

The team behind Shun Feng Crayfish Delight shared how they took nine months to perfect the broth until they were satisfied. According to their father-in-law, who mentors them, every dish has to have these four things: oil, saltiness, aftertaste of sweetness and umami. As I was listening to them, I couldn’t help but feel impressed and touched by their passion for their stall. We ordered a total of three dishes and couldn’t wait to dig in. There are two types of carbs available, the white rice or the kway tiao ($0.50 each). The Crystal Crayfish Delight ($10 for medium) was the humble stall’s signature dish. It came with three whole crayfishes in the medium-sized bowl, which is enough to feed two to three pax. Delivered fresh daily to the stall, the chefs insist on choosing decently-sized crayfish to keep up with the quality of the food. The meat was perfectly cooked and came off the shell easily. The broth also had a stronger seafood taste as the crayfishes were cooked together with it. The dish definitely hit all the right notes for us. Our second bowl was the Mackerel Slices Delight ($7), which was apparently another popular dish amongst customers. The dish came with a prawn as well, as well as handmade meatballs. The thickly-cut sliced fish tasted fresh and tender. The soup was slightly salty, more so than I was used to. We later learnt that it was because the soup is catered to the taste buds of Yishun-ers, who apparently are used to heavier flavours — thus the saltier broth. Our last dish was the Abalone Slices Delight ($7), which was hands down the stall’s best soup. The broth was the sweetest and we slurped up the entire bowl effortlessly. The sliced abalone wasn’t rubbery and was easy to chew, the dish came with sliced red grouper too, a personal favourite of mine. This bowl of soup was the best one I had that evening. As mentioned, customers can choose to pair their soup with either white rice or kway tiao, and boy we were glad to have ordered the noodles. They were so good, I could have eaten it on its own! The chefs later shared that a total of seven ingredients go into making the sauce for the kway tiao, which gave it an umami flavour. 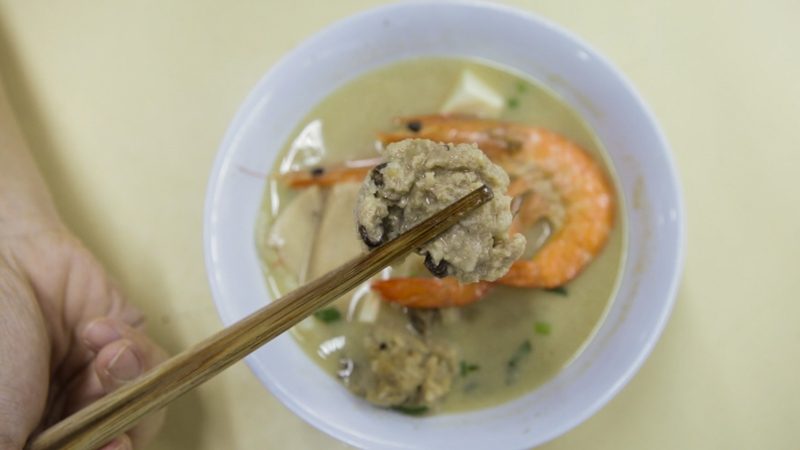 Worthy of a mention is the seasoned minced meatball — hand made with an amalgamation of ingredients, including fish paste and dried mushroom to gel the meat together. Unassuming as it may seem, it tasted absolutely delicious.