Amidst the tranquillity at Upper Bukit Timah stands a restaurant which took over the space of the old fire station. Spruce @ Firestation has an extensive menu that serves up mainly modern European cuisine and prides itself on its burgers. 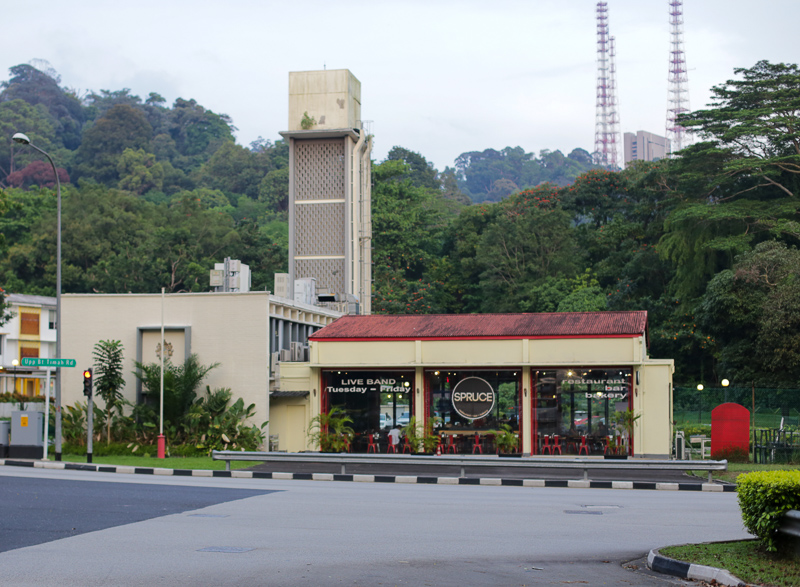 The founder, Danny Pang, always knew that he had a passion for food, and he established Spruce 11 years ago after spending some time in the United States and Australia.

Drawing inspiration for the brand’s name from the coniferous tree, it’s no coincidence that both outlets are situated in venues with lush greenery. 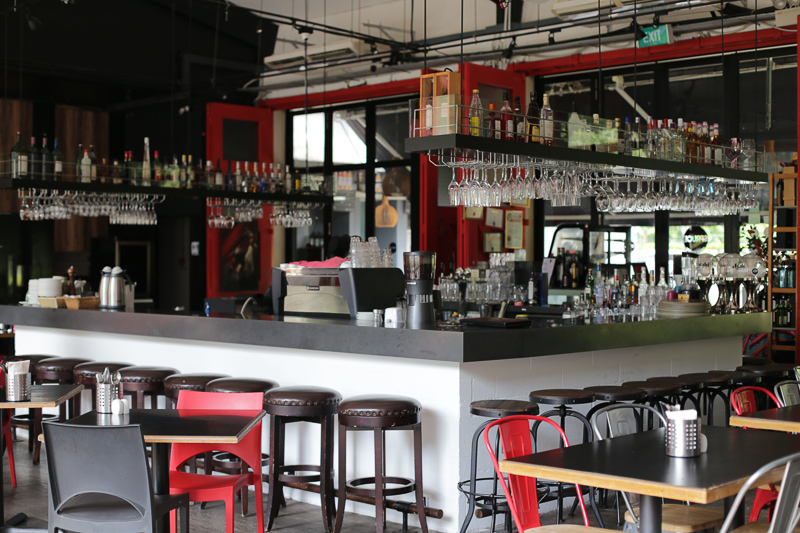 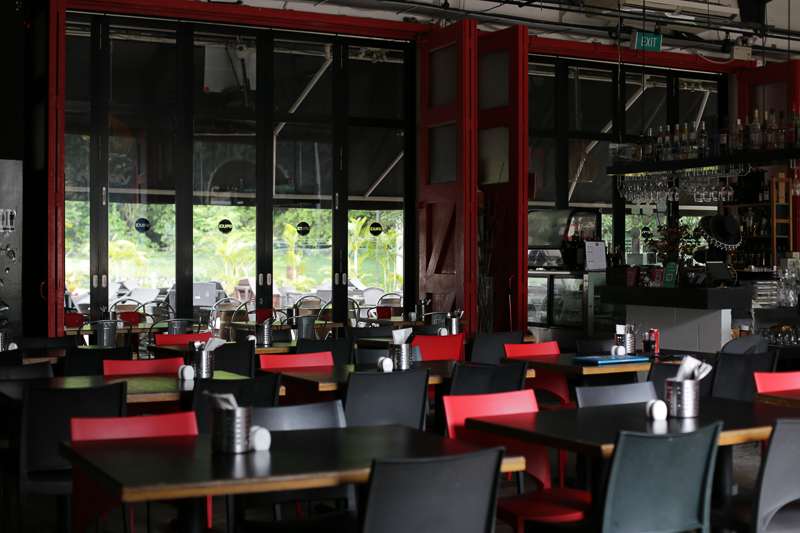 The Bukit Timah outlet’s colour scheme is a mix of black, red and white, reflecting Danny’s vision of minimalism. Much of Spruce @ Firestation’s audience are locals, unlike the Phoenix Park outlet which sees primarily expats. The surrounding residences make up most of their loyal and local customers. 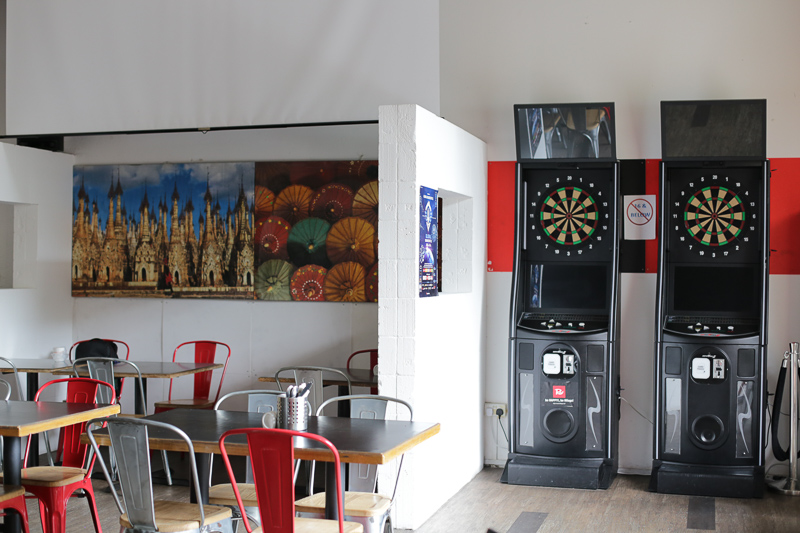 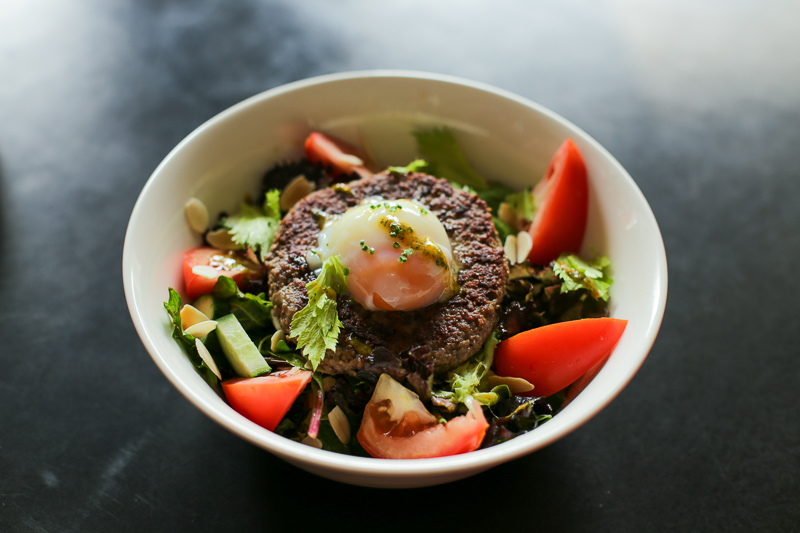 Ever heard of Impossible meat? Spruce @ Firestation has also joined the bandwagon and created their own Impossible meat dish—Meatless Hamburg Salad (S$22). Impossible meat is a plant-based substitute for meat products, yet it tastes and looks exactly like meat. The “meat” patty was tender and easy to bite into. 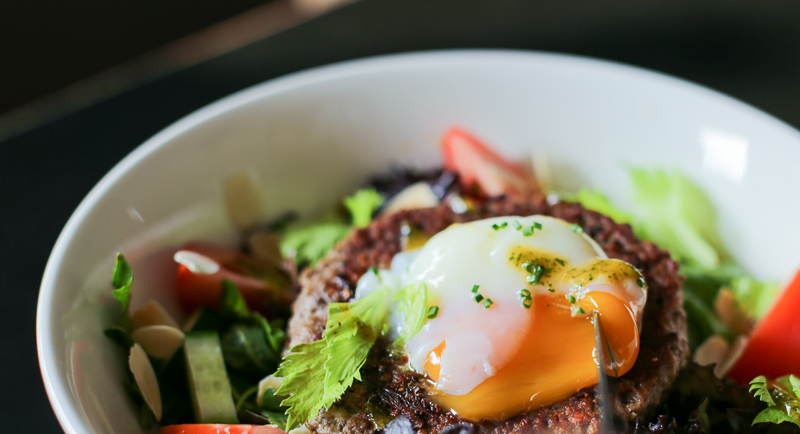 Spruce @ Firestation makes its eggs perfectly runny which blends well with the flavours of the salad. This salad might look ordinary, but it packs a punch. The home-made sauce consists of a sesame base and mixed with Thai tom yum spices.

A piece of advice to small eaters is that the portion is rather huge, so you can eat it as a main instead of a starter as well. 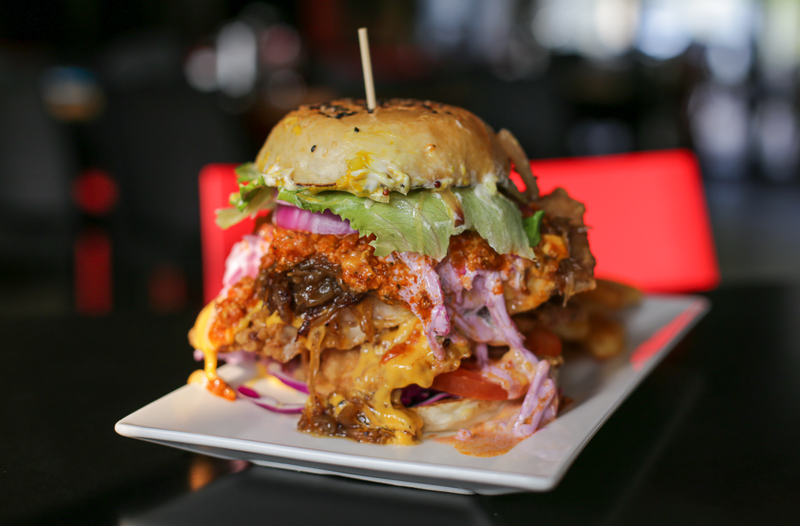 We definitely had to try Spruce’s burgers. One of the restaurant’s newer creations is this massive burger named Volcano Chicken Burger (S$24). 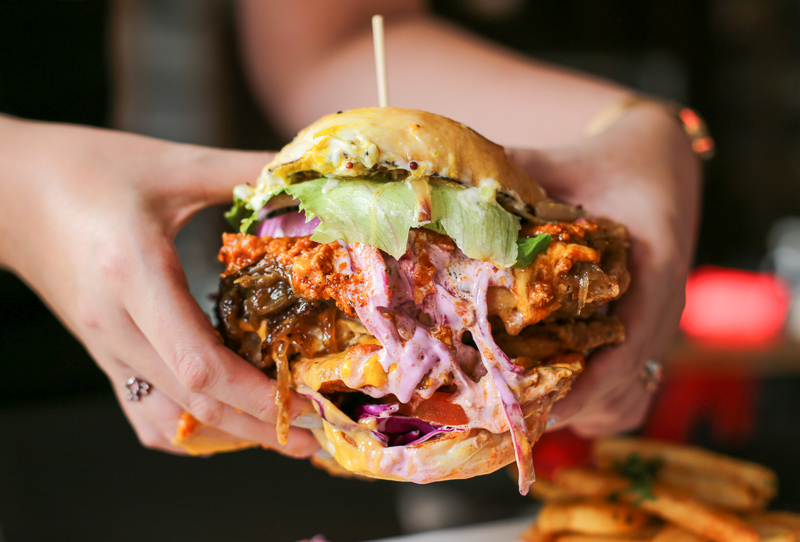 This humongous messy goodness consisted mainly of a chicken in bacon batter stacked with crispy bacon. Fresh veggies, onion compote and a very quirky looking coleslaw were added to the burger for that extra crunch and colour. 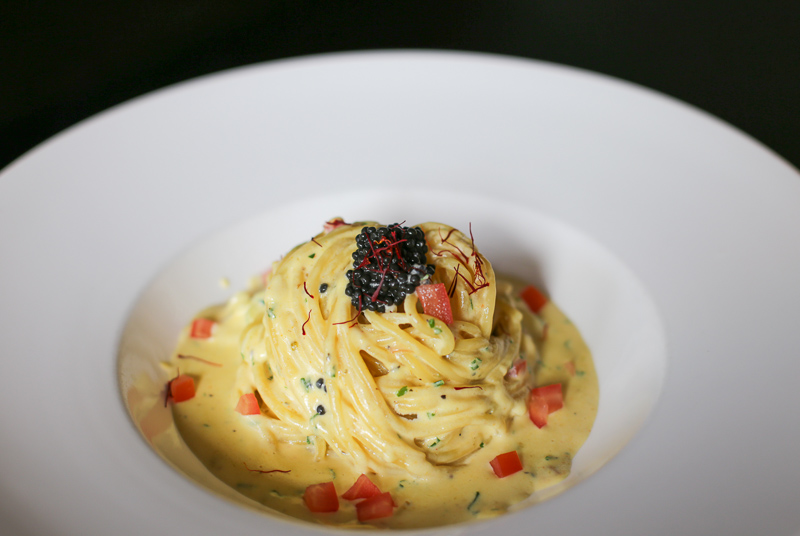 If you’re looking for lighter main options, Spruce @ Firestation also serves up delicious pasta. One of which is their Uni & Caviar Spaghetti (S$28). The spaghetti was cooked until al dente and mixed with a creamy and rich uni sauce.

To top it all off, fresh caviar is placed over the spaghetti. Even though some might say that uni is an acquired taste, I personally really enjoyed this flavour combination.

Love it or hate it? My verdict is definitely a positive one. 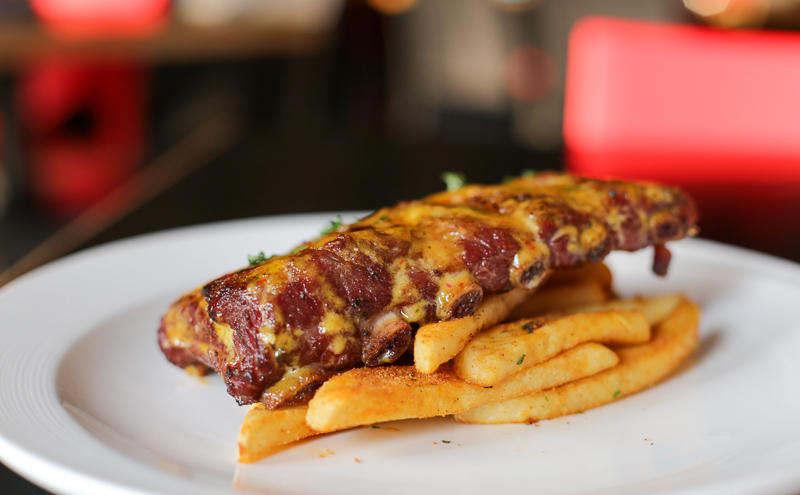 If you’re looking for meat dishes, Spruce @ Firestation has got your back with their Baby Anne Back Ribs (S$29). Unlike regular ribs, this barbecued goodness was slathered in an Asian sauce, which would definitely leave you pleasantly surprised. 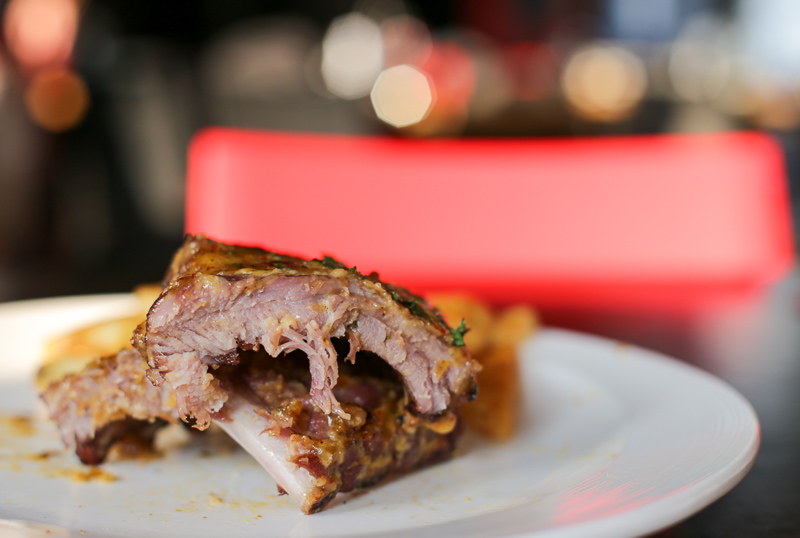 The meat was cooked until tender and was quite easy to pull off from the bone. Alongside the ribs, Spruce’s classic thick-cut fries make the perfect pairing for this meaty dish. 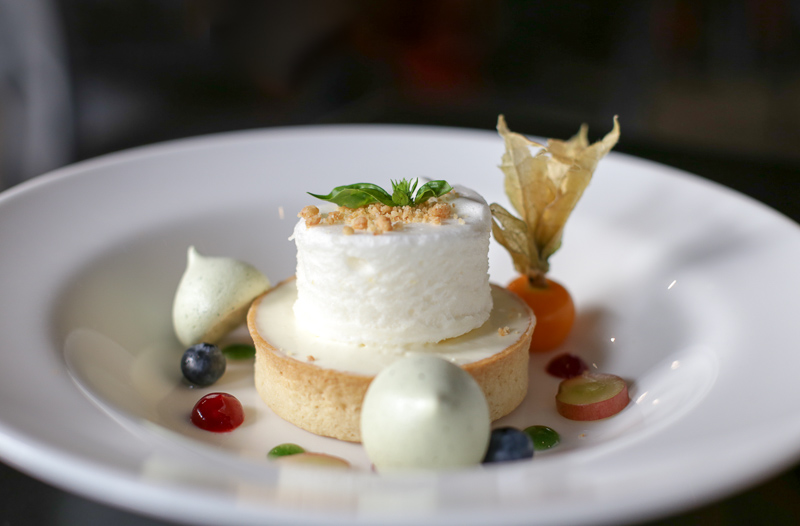 To end off this delightful meal, we had the Lemon Meringue Tart ($S12). At first bite, I knew immediately that this dessert was the perfect palate cleanser. The tartness was particularly refreshing, while the soft meringue provided a light and airy texture to the dish.

However, something that didn’t really work for me was the green mini meringue. Mint-flavoured, it reminded me of something close to toothpaste.

I really enjoyed the dessert but wished I could have switched out the minty meringues for other flavours. 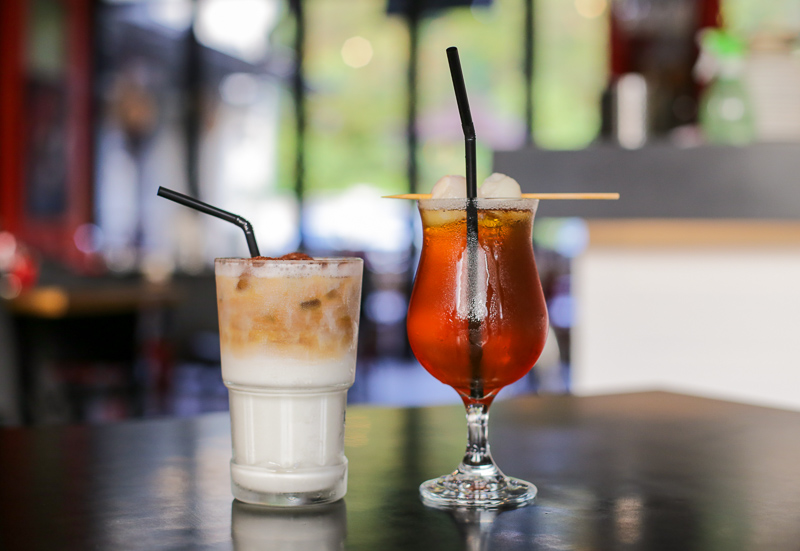 If you’re feeling thirsty, try out the drinks. We ordered the Ice Lychee Tea (S$8 per cup) and the Iced Latte (S$8).

The restaurant brews fantastic coffee and has its own coffee making station. One of the loyal customers even spends time travelling across the island just to grab a cup of Spruce’s Iced Latte!

As a whole, I would definitely recommend visiting Spruce, especially for its burgers. Come immerse yourself in the tranquillity the relaxing atmosphere and enjoy the delectable dishes.