Sugar Thieves is famous for its ever-changing menu and unique dessert flavours.

Quietly residing along the streets of Kreta Ayer Road, Sugar Thieves offers an extensive range of croissants, cakes and other desserts with interesting flavours. The stall can be easily spotted from across the street due to the blinds with their large logo printed on it. 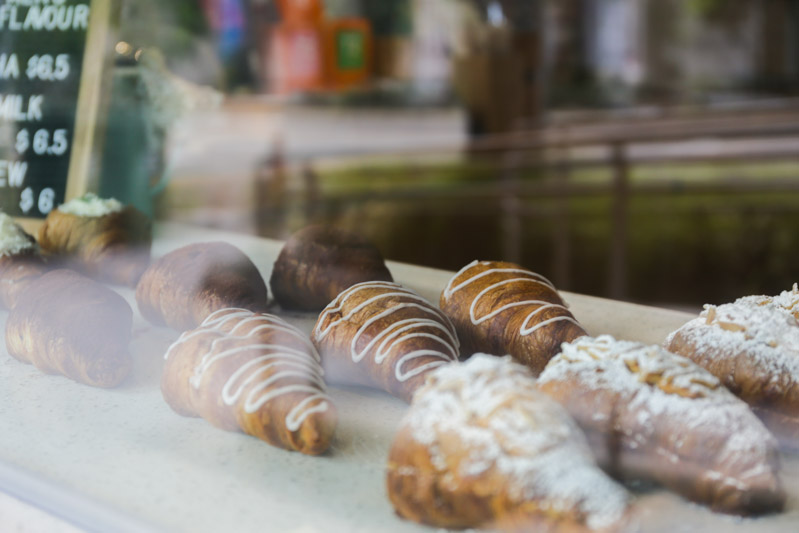 Even before we entered the shop, we could see the croissants on display through the windows.

You can tell how passionate they are about dessert-making from all the fun flavours that they’ve created in the past such as Ginger Creme Brulee Tarts, Milo Dinosaur Croissant, and Mao Shan Wang Croissant. 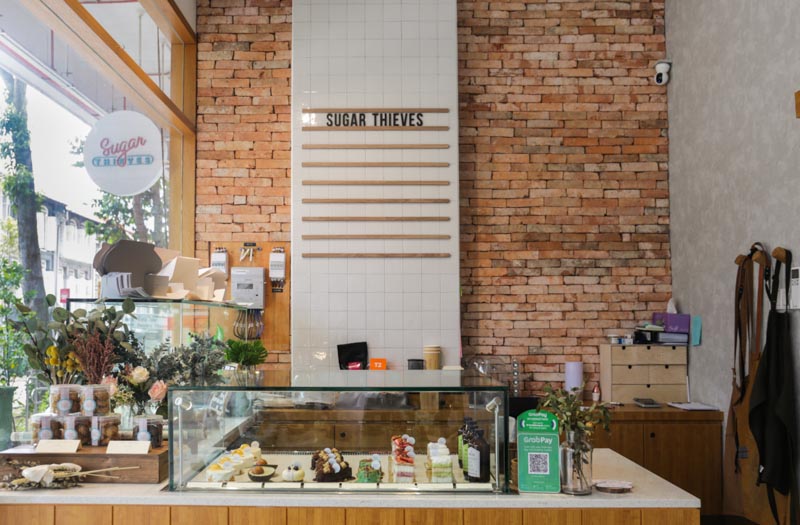 Inside the shop, their cake selections can be seen on the glass display at the counter. Most people get their desserts to go, however, there is also a cosy sitting area if you choose to dine in instead. The sitting area is directly beside the floor-to-ceiling glass window which allows for natural light to shine in, so you can take all the photos you want for your Instagram. Apart from their permanent menu items, Sugar Thieves is always cooking up some special and unique flavours, which they keep on the menu a period of time—like this Salted Egg Boluo Croissant (S$6.50).

The Boluo crusted croissant with salted egg lava is served with a cute little cube of butter, and the sweet and buttery smell from the croissant filled our noses even before we dug in. 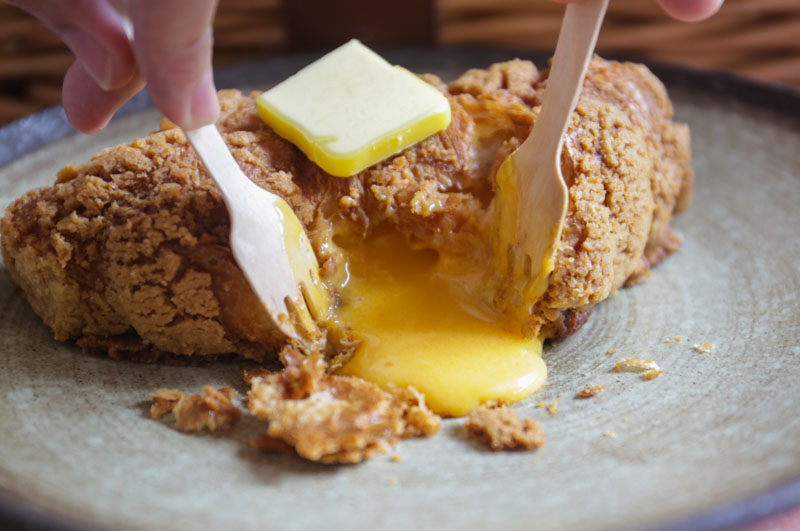 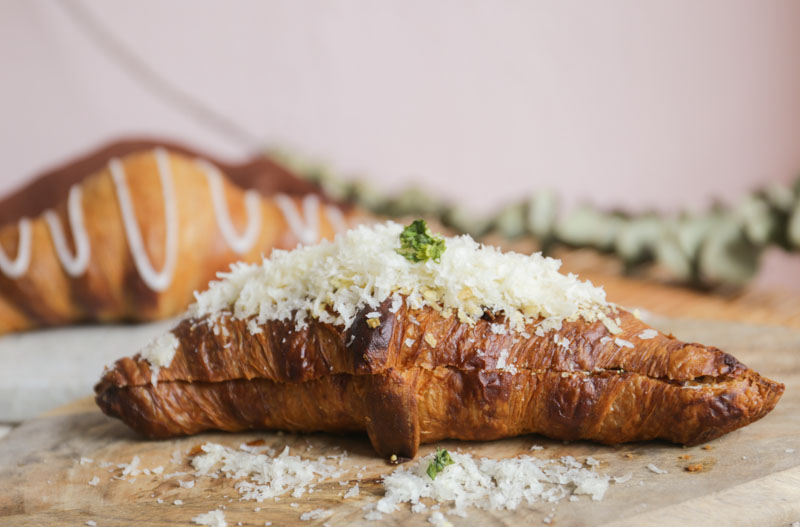 For the people who like savoury treats, they have is the Truffle Croissant (S$7). The smell of truffle was intense, to say the least. 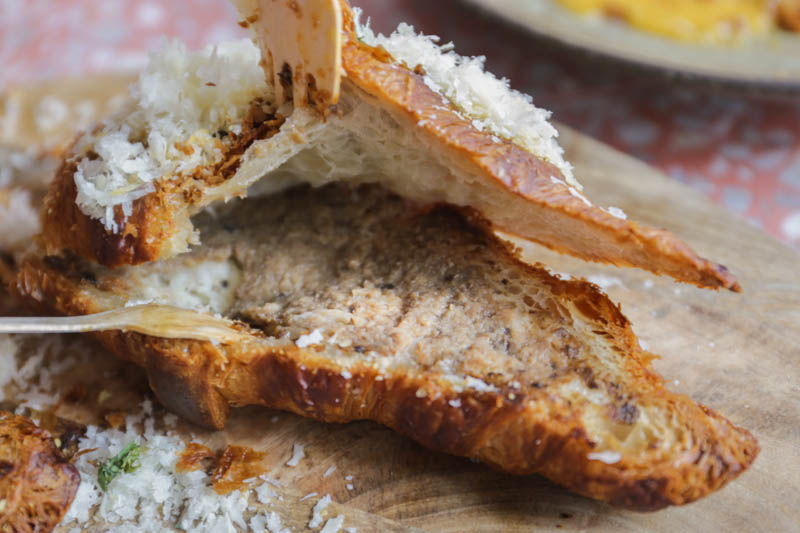 The strong presence of truffle was evident as we could already smell it before we dug in. The flakiness of the croissant is also more distinct as compared to the previous one given that the Salted Egg Boluo Croissant had a layer of Boluo crust.

If you’re someone who doesn’t enjoy strong flavours like truffle, you may want to try something else because the lighter texture will bring out the truffle flavour even more. 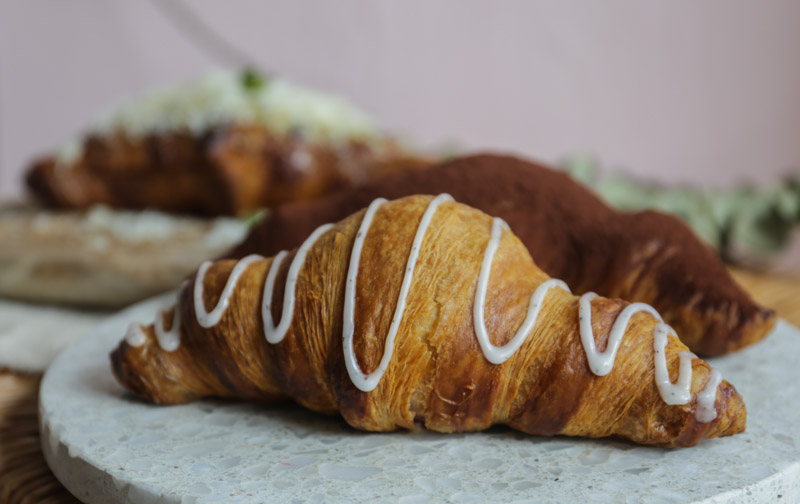 For people who lean more toward sweet treats, the Kopi Gao Siew Dai Croissant (S$6) and Earl Grey Milk Tea With Raspberry Jam Croissant (S$6.50) would be at the top of your list. Judging by the size and shape of these sweet treats, we could already tell that they were abundantly filled. 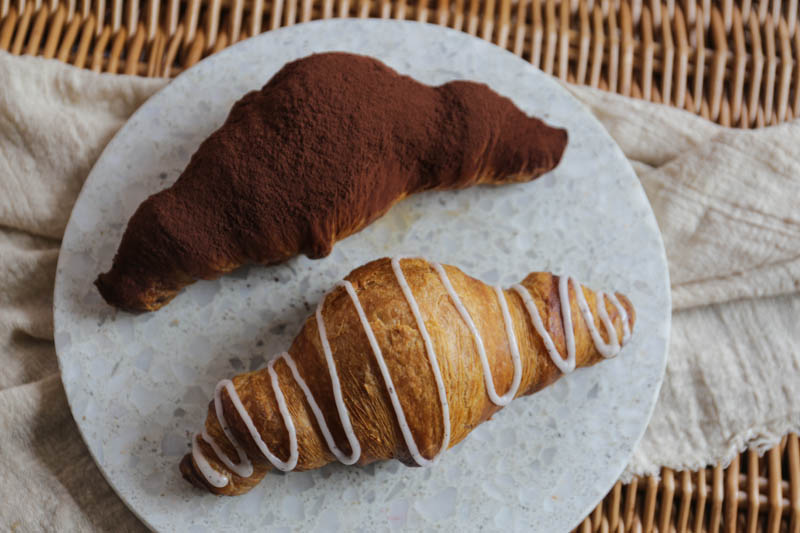 The Kopi Gao Siew Dai Croissant (S$6) is covered in cocoa powder, while the Earl Grey Milk Tea With Raspberry Jam Croissant (S$6.50) was nicely decorated with an artistic drizzle of icing. As we dug into the Earl Grey Milk Tea With Raspberry Jam Croissant (S$6.50), we could see the specks of Earl Grey tea leaves in the tea cream filling with hints of the raspberry jam.

Although we could taste the woody and malty flavour of the Earl Grey as it was quite striking, it wasn’t too overpowering. However, we thought it could use a little less cream as it was a little too cloying. 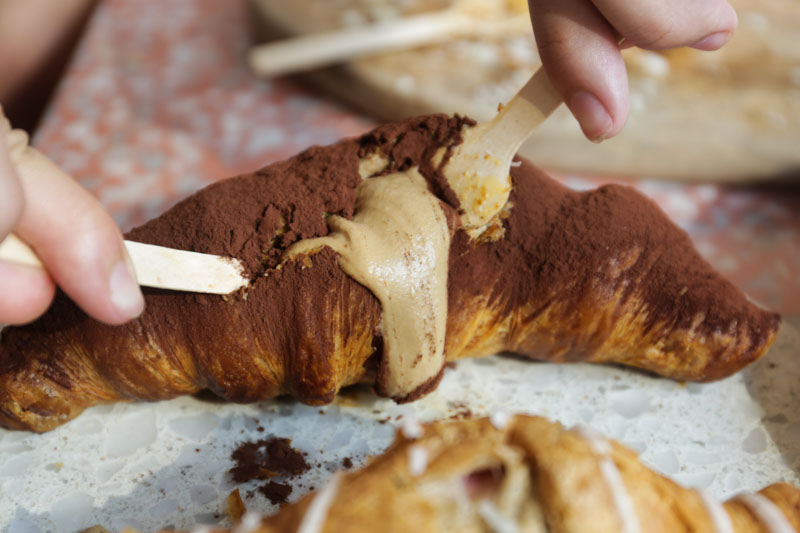 The Kopi Gao Siew Dai Croissant (S$6), like the Salted Egg Boluo Croissant, has a local twist to it. Kopi Gao Siew Dai literally translates to “coffee, less water, less sugar” and is what some people might order at a coffee shop. 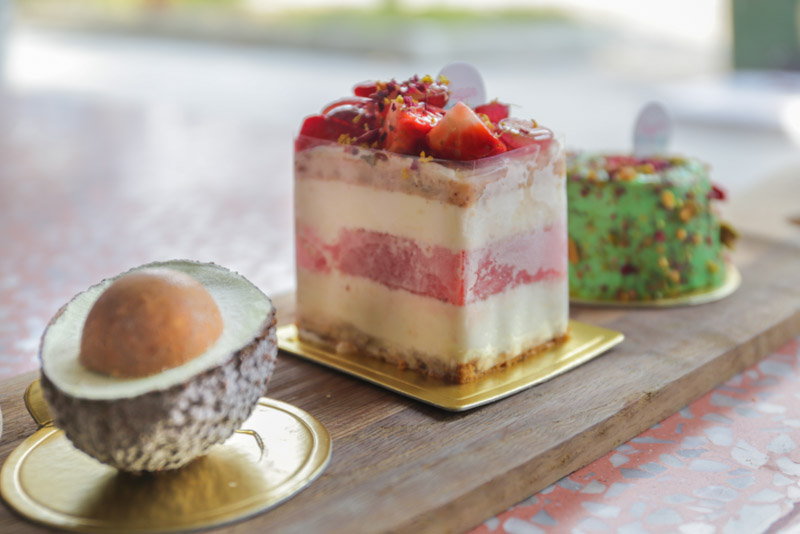 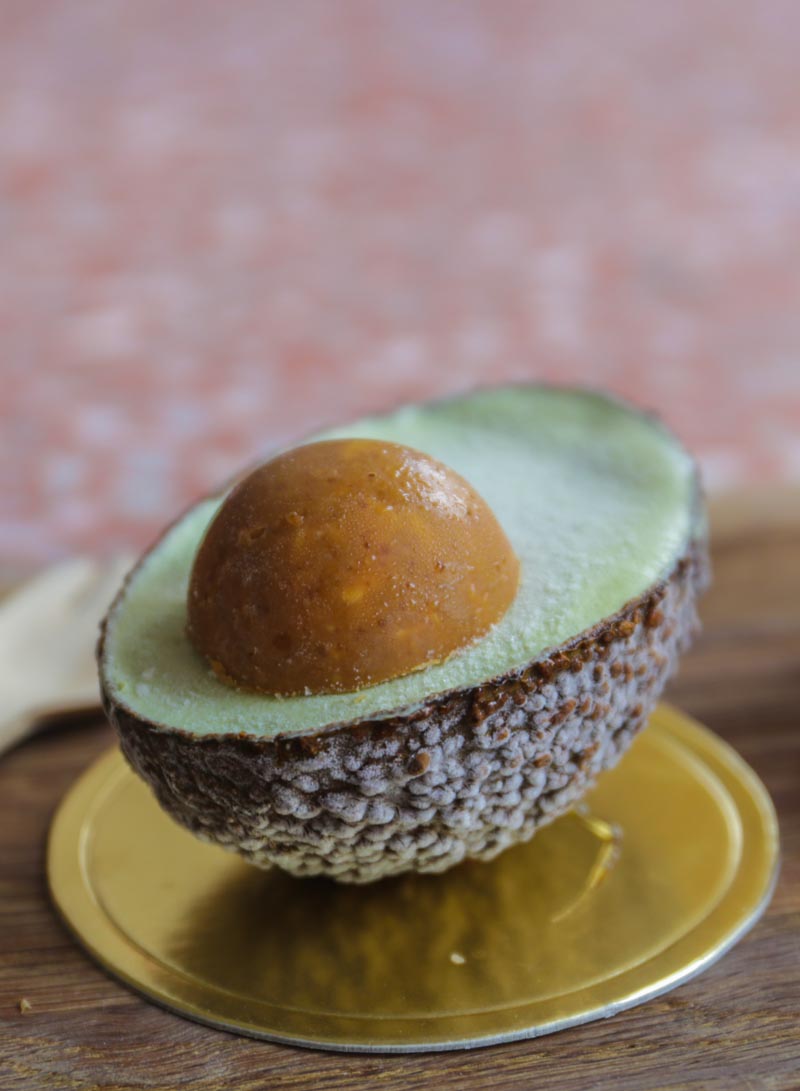 The Avo (S$8.90) resembled an actual avocado fruit, however, it is actually made up of avocado cheesecake mousse, chocolate sponge, and macadamia praline. We thought that we could eat the entire thing but the shell is actually real avocado skin and it’s inedible. 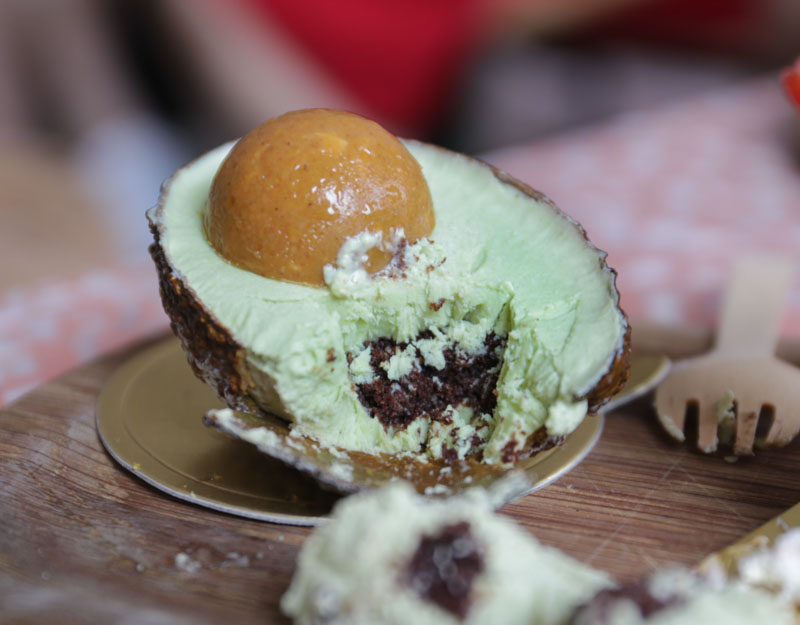 The avocado cheesecake mousse had a soft and creamy texture and since it was just taken out from the freezer, I felt as though I was eating ice cream instead. The cheesecake flavour was rather mild and the chocolate sponge was also not overly sweet, which would be good if you’ve had too much sugar from the previous two croissants. 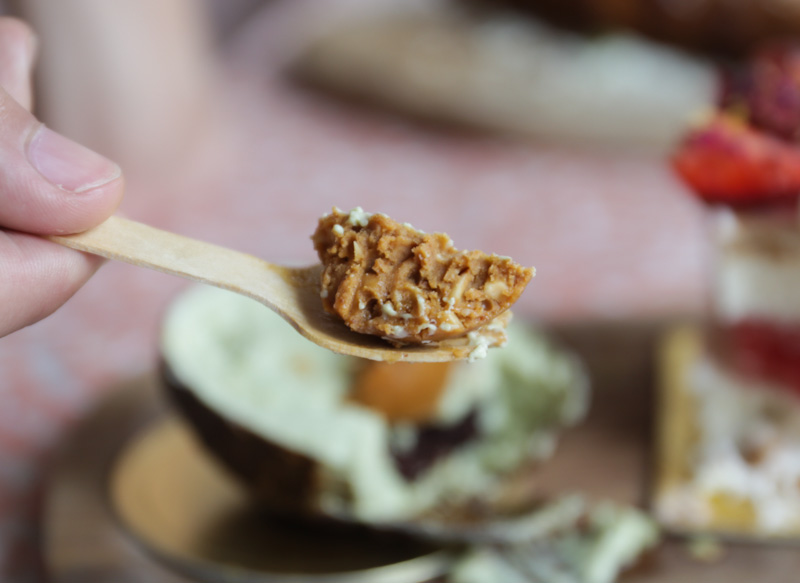 The macadamia praline actually reminded me more of peanut butter as it had quite a toasted nutty flavour. The sweetness from the macadamia praline went well with the avocado cheesecake mousse and chocolate sponge which aren’t too sweet. Since the dessert had a rather mild flavour profile, I could taste every component of the dish better. 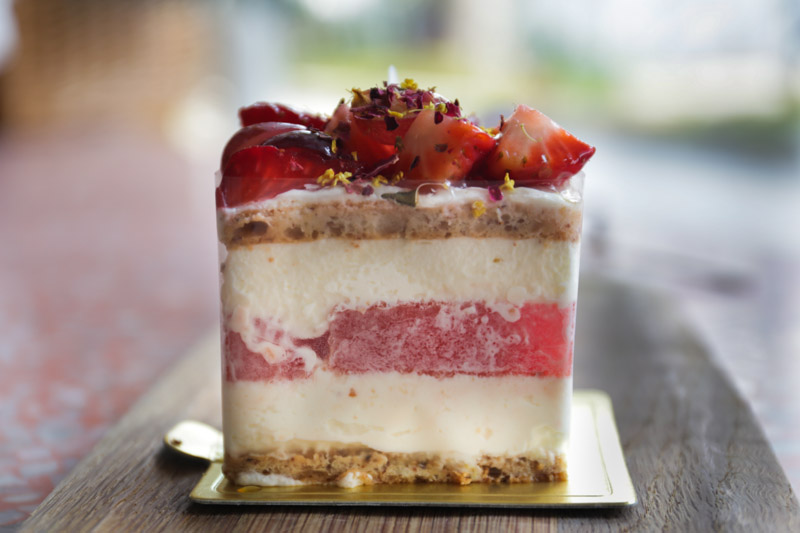 The Strawberry Watermelon Cake (S$8.90) was the next thing we tried. It consisted of almond dacquoise (a nut meringue layer), rose cream, watermelon slice, fresh strawberries and grapes, rose gel, and dried flowers. 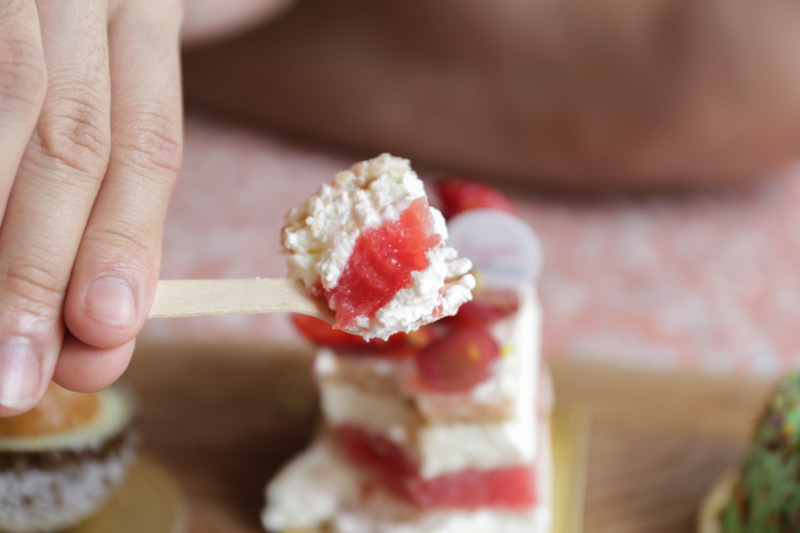 What I liked about this dessert is that it was extremely light and airy—it was a good alternative to the heavier flavours. The fresh fruits also made it more refreshing. For me, it acted as a palate cleanser. Last but not least, the Summer Green (S$9.90), which had summer berries compote and sponge encased in the pistachio mousse covered in pistachio ganache. I didn’t want to spoil such an eye-pleasing treat but I had to know what it tastes like. 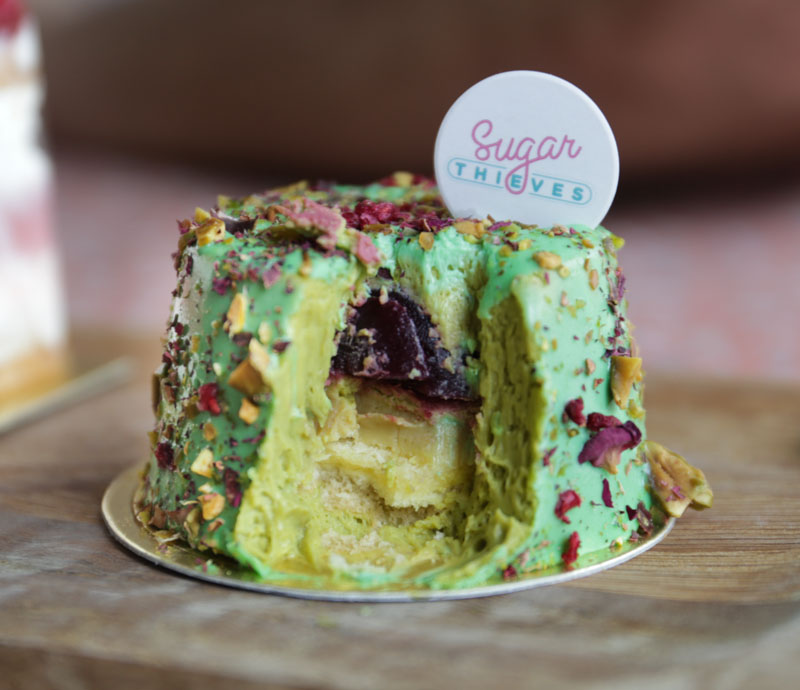 Even after eating the pistachio ganache with the pistachio mousse, it still had quite an intense white chocolate flavour and the pistachio flavour only comes through afterwards, leaving a nutty aftertaste in your mouth.

This treat was too sweet for me since I don’t have much of a sweet tooth, but for people who really like sweet stuff, you’ll definitely love the Summer Green. 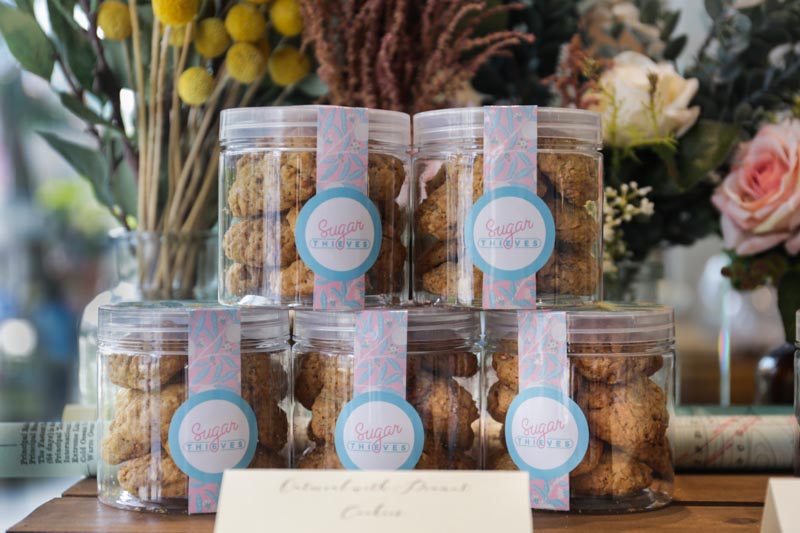 Everything from Sugar Thieves is made from scratch, so show them some love. One of the hot favourites among locals is their Ondeh Ondeh Cake (S$8.90) which consists of a pandan sponge cake, gula melaka coconut, gula melaka cream and coconut cream.

They even have Oatmeal and Peanut Cookies (S$12.90 per tub) if you want to bring some home and snack on them. Sip on a cup of tea while eating, and you can choose from four different flavoured Teas (S$5 per cup): Strawberry, Mint, Rose and Mango.

My personal favourite was definitely the Salted Egg Boluo Croissant. The savouriness was just so addictive that I couldn’t stop eating it. It’s a shame that it is not on the permanent menu.

However, they are always creating new flavours so make sure to keep a lookout on their Instagram where they post more of their updates. I can’t wait to go back for more!