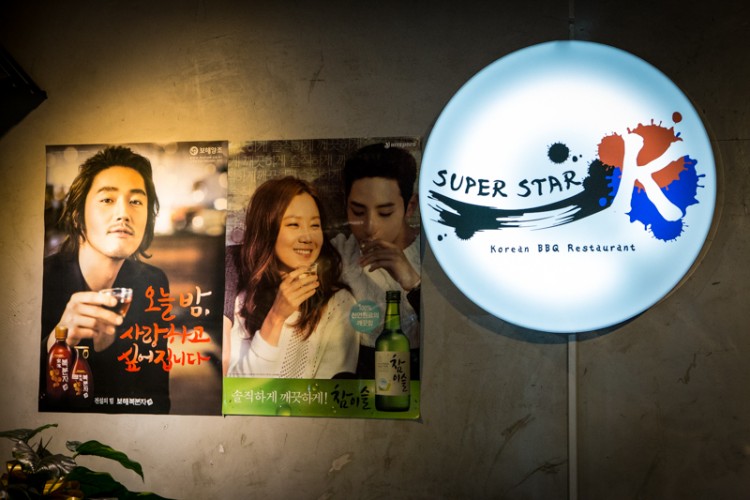 At Super Star K the Korean BBQ restaurant, which recently opened a second outlet on Circular Road, exhibiting your K-Pop-inflamed vocal prowess before the throng of diners is not an option. Neither is asking if celebrity judge Baek Ji-young of the talent show namesake will make a special appearance. Much to the contrary of my zany inferences, the no-frills Super Star K absolutely cuts to the chase with its speedy preparations and prompt service. On a balmy weekday afternoon, I took to the alley of Boat Quay and found my way into Super Star K’s dining factory with snake-like suction pipes. As I watched my server dazzlingly prepare the meats for its charcoal-fueled bath at the middle of the mirror-clear tables, I remember wondering if my fellow patrons were perspiring as much as me in this grungy industrial style restaurant. It turns out the ceiling AC unit near my table just wasn’t on. When it came to life, all mucky worries ceased. 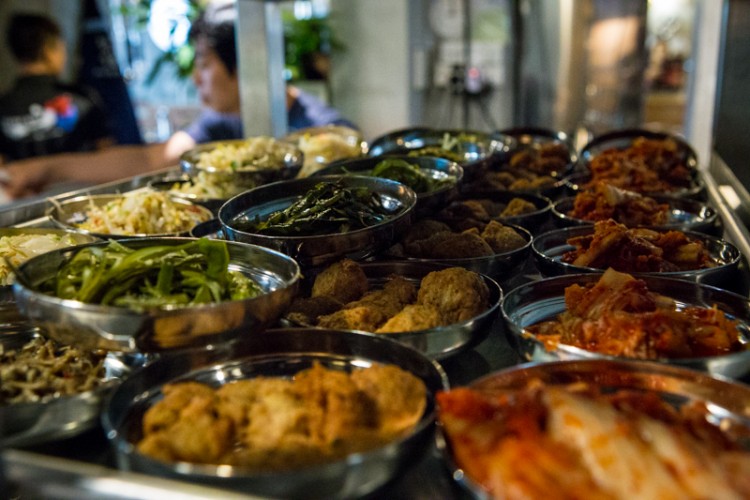 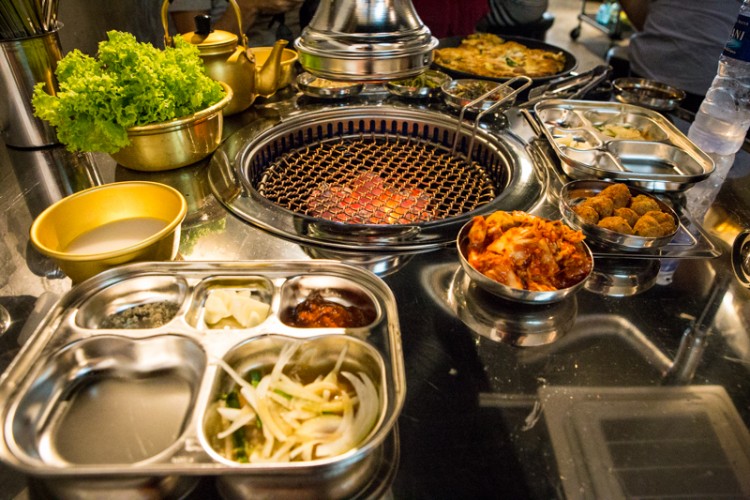 I truly fancy Korean appetizers (banchan). In the busy restaurant, a whole spread of them including bean sprouts (Kongnamul), seaweed (Miyeok Muchim), Kimchi, and spiced anchovies comes gratis upon your order. Safe to say, they all met expectations, especially the seaweed and steamed egg. 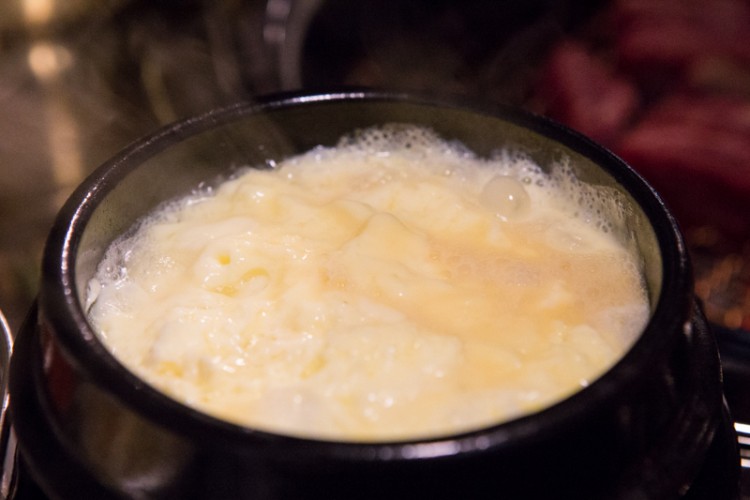 Gaeran Jim (Free with barbeque, $2 per additional serving). A light yellow bubbling solution seldom seems terrifying, because eggs are always great. In the hot bowl of steamed runny egg of manifold textures, every scoop is a race to the bottom with this delicious banchan. Makgeolli ($20). A golden teapot that would contain Makgeolli was later placed on the table along with traditional drinking bowls. It was initially a little intriguing (I believe this was my first attempt), but sake appears to come similarly close in taste to this sweet makgeoli. I very much enjoyed the odd sweetness of this fermented rice beverage and its consummate pairing with the other dishes. Seafood Pancake ($26). What looks like a savoury carrot cake is in fact the pan-seared result of abundant eggs and spring onion, prawn, and squid. While it’s difficult to say it was intensely flavoured, there is some reprieve from using the oily sweet pancake sauce provided. 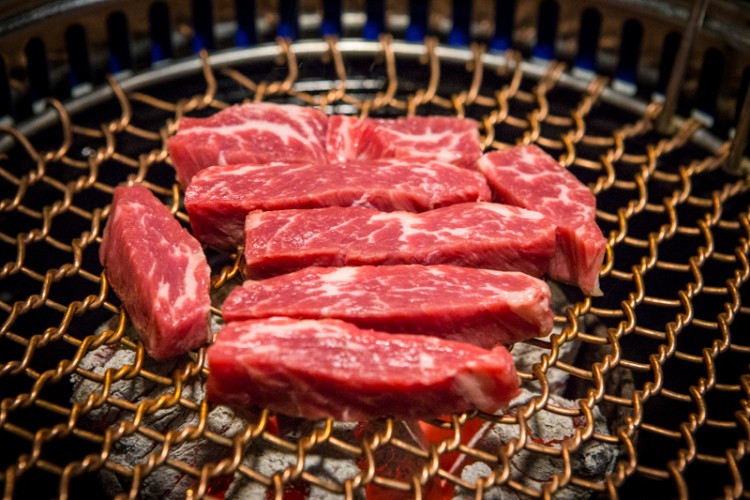 Grilled Beef Ribs ($29). The succulent slices of steak are set ablaze on the fairly pristine grill here, all with the skillful assistance of the server. I watched the roasting closely and retrieved my first medium-rare piece. Its richness of beef, underneath a toothsome char, was almost as impressive as its marbling—a sheer pleasure to work on. Almost without pause I got to the subsequent pieces. 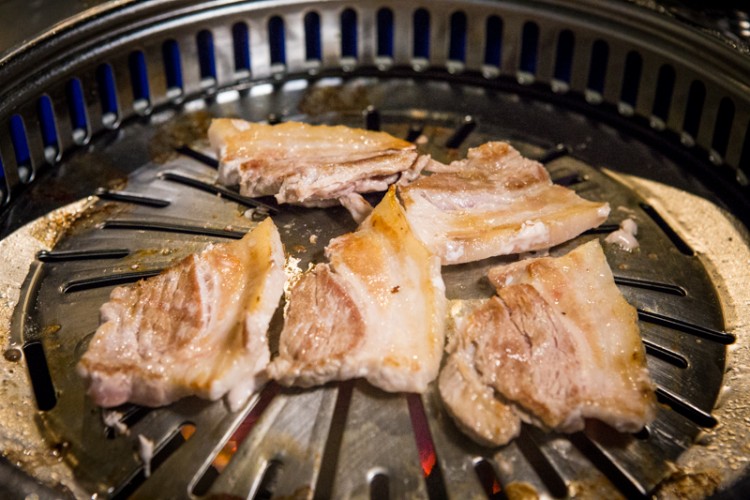 Pork Belly BBQ ($18). After grilling the beef, a different type of metal grill is swapped to accommodate the pork. The pork belly quickly inherits a toasted maillard coat. There wasn’t a prominent marinade in the juicy fat slices, so slathering the chili sauce over turned out to be a good idea to add a bit more flavour. You could sprinkle some salt as well that’s provided at the side. 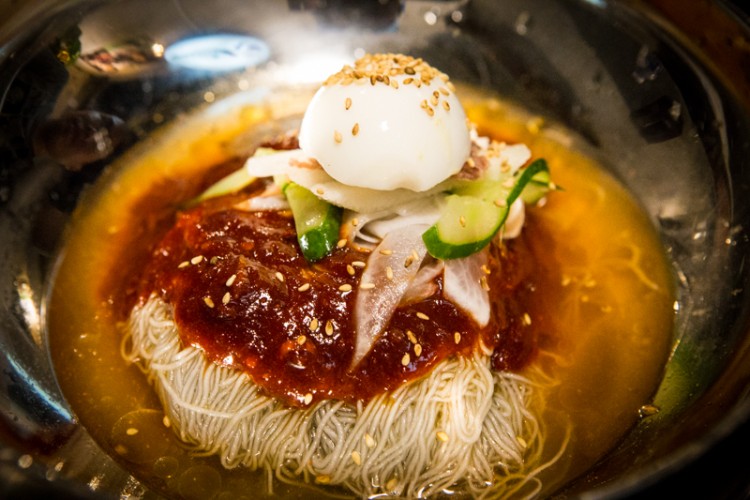 Bibim Naengmyeon ($12.80). Not enough praise can be sung for the flexibility of these thread-thin noodles that are dunked in a yellow stock and topped with copious amounts of chili. I would go as far as to compare this to Mee Siam but with a refined bounce. When the noodles seem to be unending in a chopstick retrieval, rest assured that its soft and compact body guarantees against unsightly spillage. 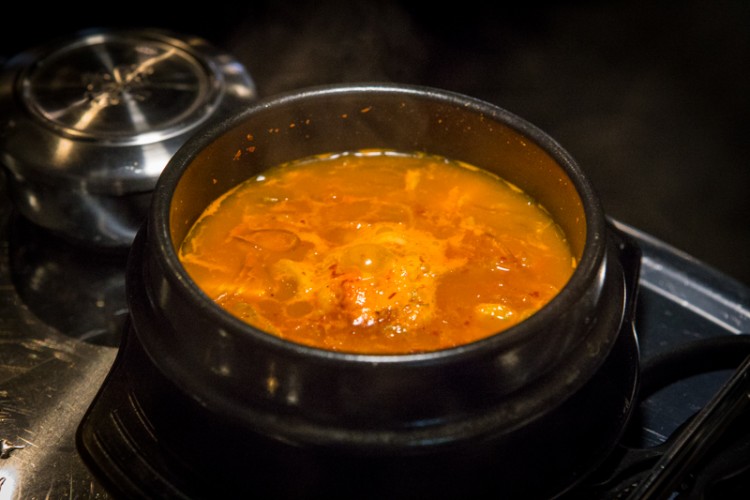 Kimchi Stew ($13). A predominant tomato base in the Kimchi Stew appears to sully what I would have thought to be a spicy kimchi soup. Poured over a bed of glass noodles and tofu, this dish is less impressionable than expected but a decent choice for tomato soup. I’ve tried the kimchi stew at Super Star K’s first outlet at Tanjong Pagar, which was way better.

Service was fast, with every dish seemingly served in a rush within minutes. It’s always a nice touch to see the servers helping you grill and slicing the meat as per Korean BBQ service etiquette.

On a wintry day, perhaps there can be nothing more gratifying than crowding around the charcoal in Super Star K, watching in heated amazement as the meats grill, and imbibing the various Korean alcohols advertised on the restaurant’s walls. If that fails to happen, I trust a meal here will nonetheless please anyone.