When I think of Japanese dining, I think of refined and clean flavours. My perception was turned around when I only recently discovered how much Tanuki Raw‘s menu has evolved since it opened in 2012. They are known for their great weekly sashimi deals, but now also serve heavy-handed donburi bowls that’ll get you. 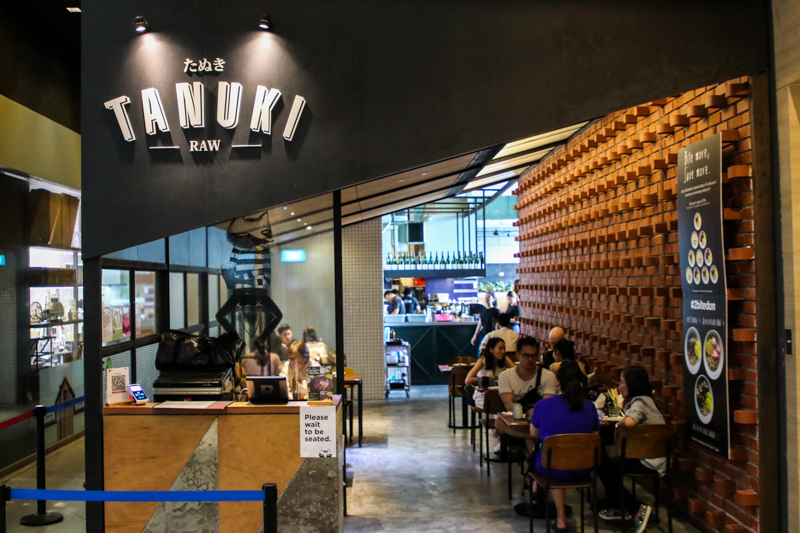 I visited the Orchard Central outlet, although they do have another one at Middle Road. I prefer the elevated view when sitting on their patio, so it feels like you’re truly immersing yourself into the buzz of Orchard Road. In comparison, their indoor seating seems too dark and restricted. The Foie Gras With Custard (S$24) drew my attention instantly when I spotted it on the menu. With a rather hefty price tag, I suppose only die-hard fans of goose liver would take a chance on this. It’s pan-seared foie gras balanced atop chilled foie gras custard with truffle-scented mushroom glaze. 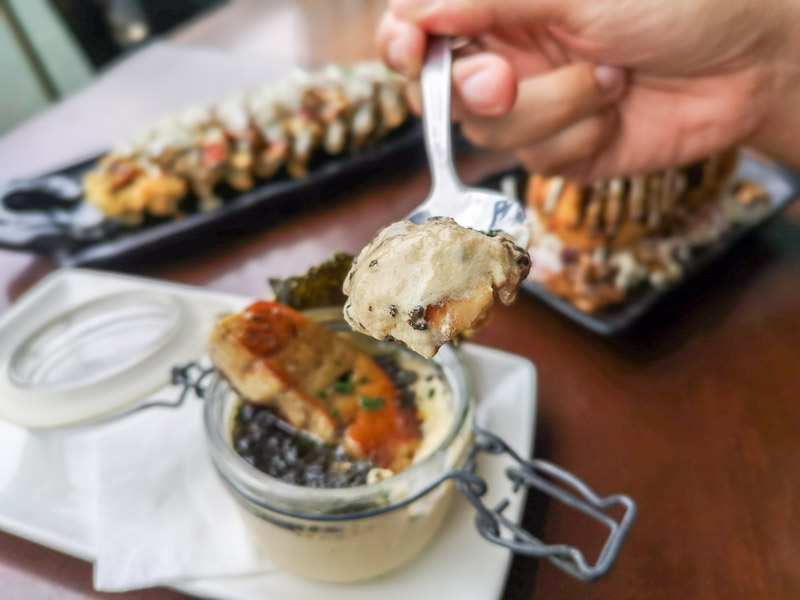 My feelings about foie gras are so-so; I mean I don’t seek it out specifically. The chilled custard was runnier than I’d expected, which was a bit of a let-down for me. However, I had no qualms about the pan-seared foie gras, which had a really thin and crisp crust on the outside and a smooth curdle of goose liver on the inside.

It was rich and savoury, especially with the aroma of truffle which resulted in me finishing off only the foie gras itself and leaving behind most of the custard. If you’re a fan of loaded sushi rolls, Instagram This Maki (S$13.90) is something you might want to consider. When it arrived at the table, I had no idea what to make of it; it was unlike any type of sushi I’d encountered before.

This deep-fried creation is made up of fried yakiniku steak, avocado, tamago & bacon maki, topped with melted cheese, smoked ketchup, umami mayo and a liberal sprinkling of onions. Heads up, I’m also not a huge fan of fried food, so I really tried to dive into this with an open mind. Picking up a slice with a pair of chopsticks proved to be a challenge in itself, as the sushi crumbled too easily. Once I’d managed to, and popped one into my mouth, I was greeted by an overwhelming zing of raw onions, followed by the crunch of the batter.

I found it challenging to detect the yakiniku beef or avocado or any other ingredient, really. There was too much going on for my palate, and I had to raise the white flag after only one helping. 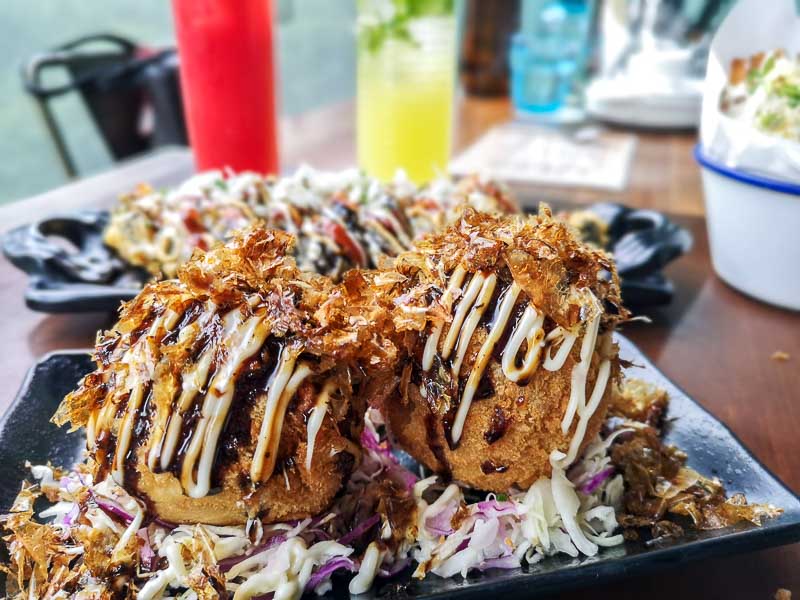 The texture of the balls was rather dry and flaky, in spite of the tremendous amount of sauces they were paired with. I really wanted to enjoy these as I love unagi, but I couldn’t get past the arid nature of the dish. Also, after a while, they become even more difficult to swallow as I was getting sick of its dull flavours. 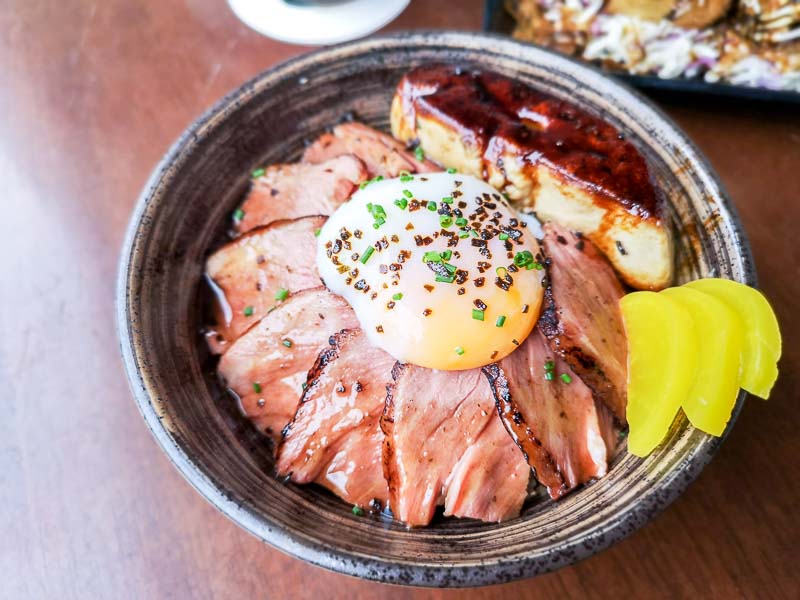 I asked a server what she would recommend to me if I had to pick only one donburi. She offered the crowd-pleaser Foie Gras Yakiniku (S$23, with an S$7 optional top-up for fresh truffle). I’ve had this combination before, at another well-known donburi place in Singapore, and I was floored when I had the first bite of it. I wanted this one to provoke me the same way. 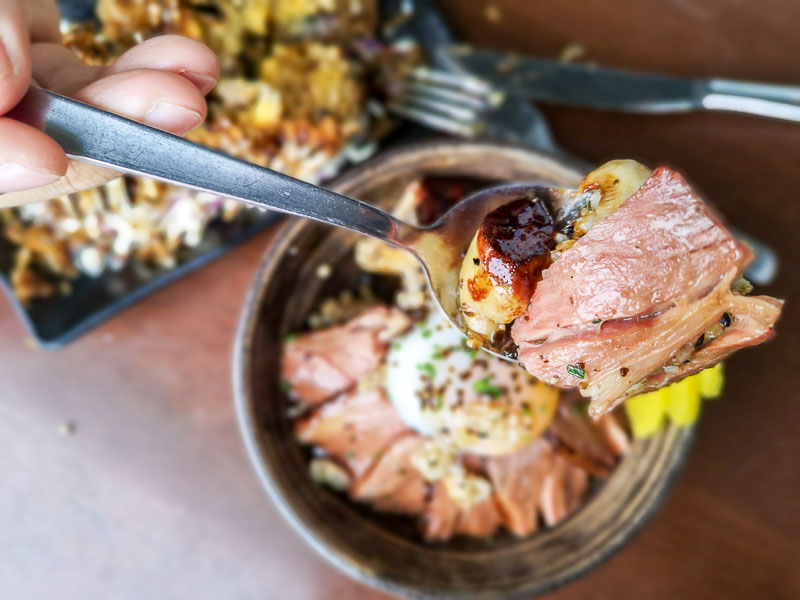 Alas, it didn’t. The ingredients simply failed to create a stellar impression on me, and lacked the similar cohesiveness that I was used to with the donburi that I was so fond of. The US Black Angus short rib was adequately tender, but the fragrance of truffle soy diminished too quickly for me to truly enjoy.

The foie gras was leaning more towards gelatinous, but I could have been starting to get really fussy and frustrated by that time. 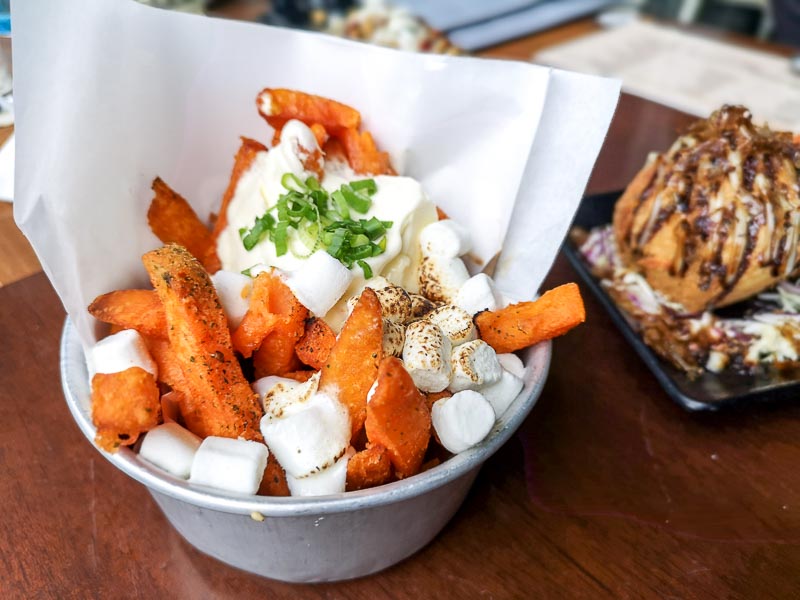 Finally, the dish that I’d been waiting to try arrived. The Wham! Fries (S$11.90) is one of the oddest mishmashes I’d come across — deep-fried sweet potato fries topped with gruyere cheese, marshmallows, Tanuki Raw’s spice mix, mozzarella and sour cream. I had a rough idea of how it’d taste, and it was something along the lines of sweet, sour and savoury. 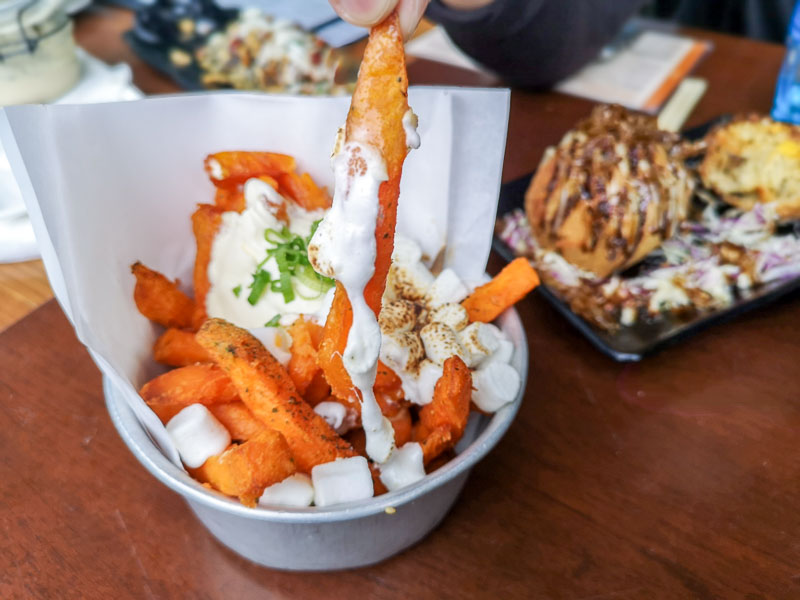 The first note of sweetness hit me as I pulled a single fry that was already slathered in melted marshmallow. The next fry I took had a better mix of sour cream, cheeses and the spice mix. I didn’t take to either fry at all. The starchiness of the sweet potato didn’t help either, as everything climaxed in a sickly, sticky and confusing mess of flavours.

After everything’s been said and done, I wish Tanuki Raw could return to the clean, lean menu they began with. Sure, it’s not as novel as the menu they have now, but the flavours are all over the place, and it lacks a strong identity as an establishment.

Call me a picky eater, but perhaps I’m just not one for blending a truckload of flavours onto one dish.

Previous articleHave A Thai-riffic Weekend At This All-You-Can-Eat Thai Brunch Buffet Now Available At Baan Ying
Next articleBaozza: A Pizza & Bao Combination Like No Other Now Available In Shanghai, China Take A Bite Out Of KFC Signature Grilled Chicken In Singapore