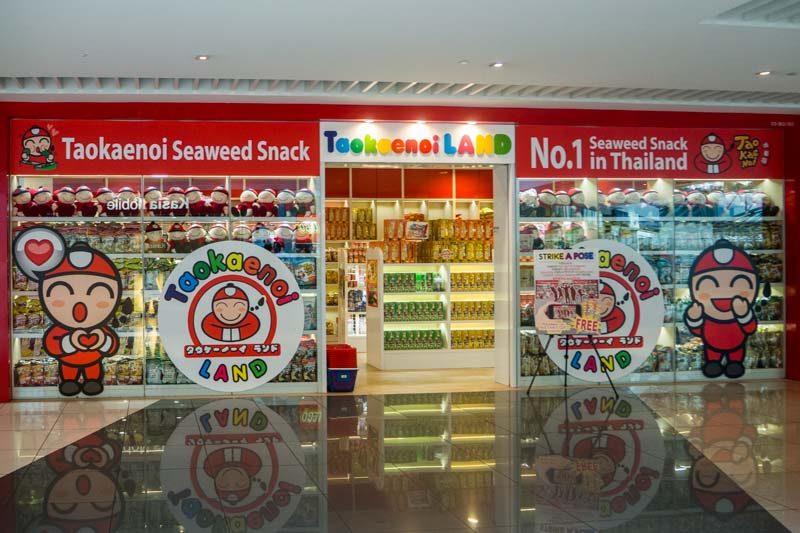 Tao Kae Noi isn’t new to the snack scene in Singapore, having made its rounds in convenience stores on our island, and definitely in our cupboards at home where we keep our secret snack stash.

It is known for its incredibly crunchy texture, while not being overly jelak from being deep fried. The variety of forms (large sheets in resealable airtight packets, big rolls, and cut up strips) is what makes it so convenient as a snack on-the-go.

If you’re a fan of the Thai fried seaweed brand, great news! Tao Kae Noi Land has recently opened its first store in Singapore at Suntec City Tower 3, where it sells more than 10 seaweed flavours — some die-hard favourites, and others that you’ve never come across before here. Setting foot in the store is like stepping into a toy store when you were little, where floor to ceiling shelves fill the entire four walls and a few others are spread across the floor space.

You’ll find different flavours at every corner of the shop along with samples in jars, so you can happily pop your hands in to try before deciding to pile your shopping baskets with an onslaught of seaweed.

Hailing from Thailand, it’s unsurprising that most flavours feature iconic dishes from the Land of Smiles. You could mix five packets for $10 or pay $15 for a big bang value pack.

Here are a few favourites: 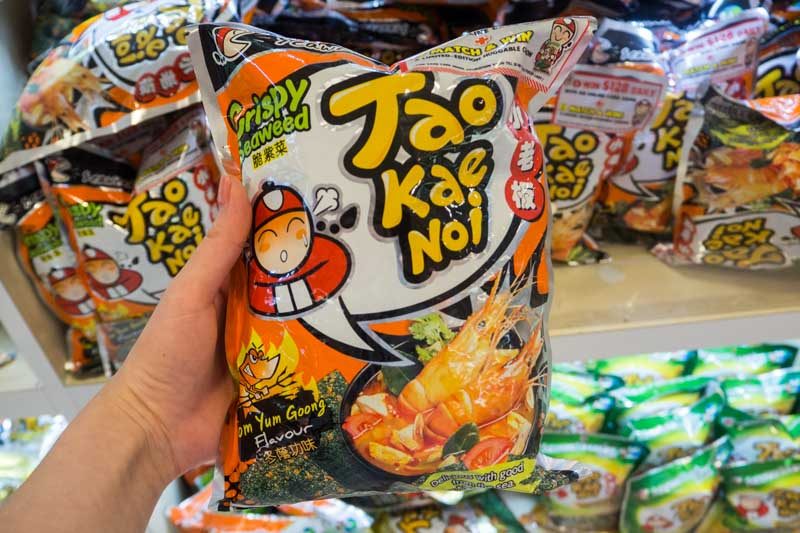 The Tom Yam Goong Flavour has the same tangy taste that you’d get from the spicy soup, along with familiar hints of lemongrass and lime. Do watch out for that tiny kick of spiciness! I felt that the Thai Curry Flavour didn’t stand out as much as the Tom Yam Goong Flavour. It was slightly milder in taste, and sweeter from the crab flavour present.

Nonetheless, if you’re looking for a less spicy version of the Tom Yam Goong, this would be right up your alley. Hands down the best — and potentially the most sinful — flavour amongst the others in the store is the Chicken Larb Tempura Seaweed. If you thought that Tao Kae Noi’s original seaweed could get any crunchier, this flavour will prove you wrong.

Every piece is coated in fried batter, making it irresistibly delicious. While there isn’t an extremely evident larb (Thai meat salad) taste, the chicken seasoning won’t have you stopping at one, so do yourself a favour and grab a packet or two when you’re there. 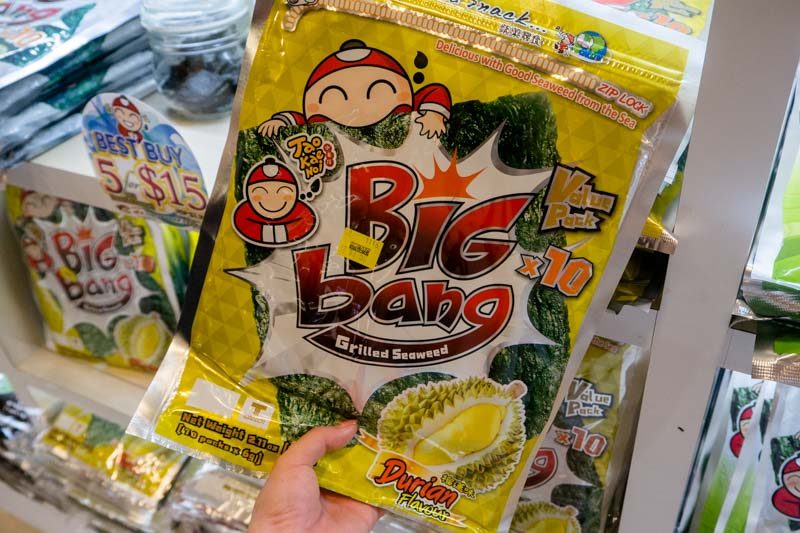 The Durian Flavour certainly caught my attention with its bright yellow packaging, and obviously with its flavour. Now, I know you’re dissing this in your head, but you should give it a chance or at least try a sample.

Perfumed with the fruit’s pungent aroma that could make or break your day, the seaweed is sweet, unlike its savoury counterparts. Combined with the seaweed’s crunchy texture, this flavour surprisingly works. Weird, I know. 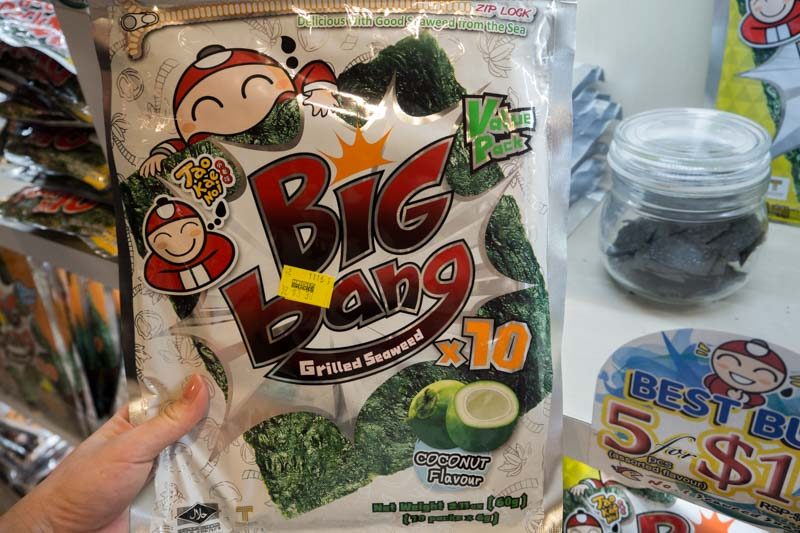 Found on the same shelf, the Coconut Flavour is also sweet and I almost forgot it was seaweed. It reminded me more of a sweet cracker but I was rather impressed with the refreshing coconut taste that it has. 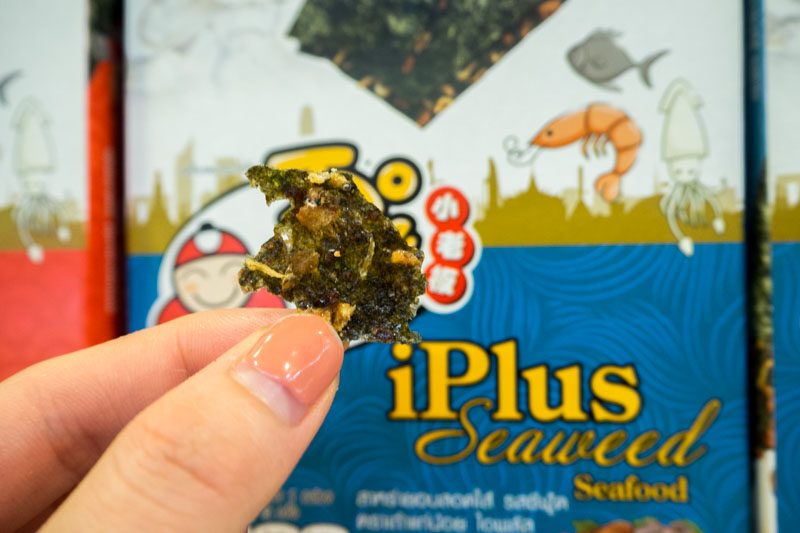 The iPlus Seaweed ($4.80) is embedded with generous portions of ikan billis, shrimps, and other dried seafood bits, adding another level of crunchiness to it. It comes in two flavours; the seafood and tom yum glaze. 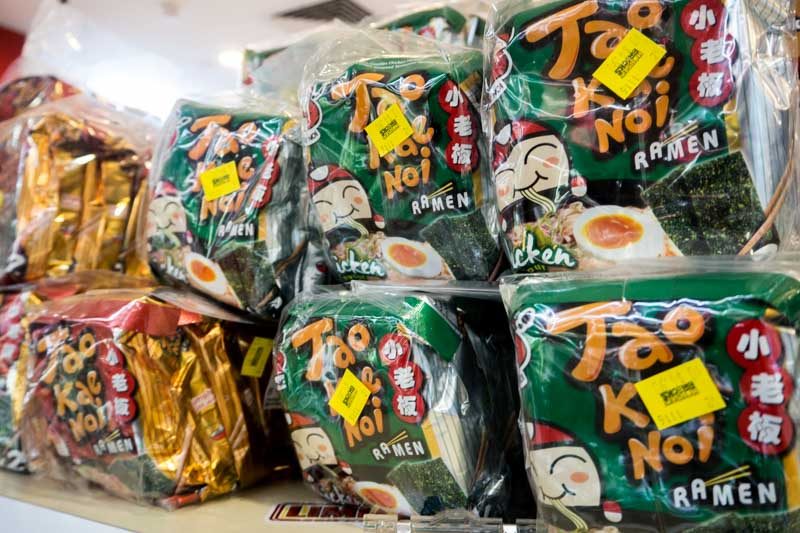 What surprised us was the inclusion of Tao Kae Noi Ramen ($4.90), which comes with two pieces of seaweed within the packet that can be used to garnish your bowl of noodles before serving. Yums!

It was an eye-opening experience while I was there, and I found myself squealing at the different interesting flavours. Tao Kae Noi seaweed isn’t the only snack there – you’ll find sweets, dried mango, and other Thai snacks as well. It’s going to be crazy choosing between the flavours, so take your time to browse the shelves and taste the samples till you’re happy with your picks.