We often hear horror stories (regardless the degree) of taxi experiences and it is commonplace for travelers, who may not be well-acquainted with the customs of a country, to get cheated of their money on a taxi ride. I know I have.

While it may be that there are undoubtedly many sincerely good-willed taxi drivers around, the numerous pockets of dishonest ones give the country’s taxi scene a bad name.

In order to help those travelling to these more-frequented Asian countries sort out the chaos, we have put together a guide of recommended taxi/car services and things to be wary of in these oriental lands. Better safe than sorry.

There is an interesting system in Thailand among many taxi drivers, whereby they earn a commission if they were to bring their passengers to specific temples, gem shops or restaurants. It is thus necessary, if you are simply interested in getting to your precise destination, to frankly decline any offers to go on a detour.

Secondly, avoid taxis that are parked directly outside or nearby tourist attractions for the taxi drivers will usually attempt to rip you off.

Apart from these kinks, taking a taxi in Thailand should be relatively decent as long as you make sure the taxi you flag down follows a fixed meter (flat rate of 35 Baht and a subsequent 2 Baht/km). If the taxi driver refuses to turn on the meter, simply refuse his service and hail another.

If you do know the average rate it takes to your destination and the proposed rate is similar, you might consider accepting the offer. But this is rarely the case.

If you are looking for a more unique “local-based” travel experience in Thailand and opt for the Tuk Tuk taxis, it is best to note that the fares charged on these quirky vehicles are higher than those on the conventional taxis and there’s no meter (only a agreed upon flat rate). Foreigners are naturally charged a higher rate (ranging from 150 to 500 Baht) out of prejudice or pure greed.

It is advisable to remember a few Thai words like khrap to address a man, ka to refer to a lady, kob khun to say your thanks.  It is also good to always ask a Thai person at the place you’re staying at what the fare to get to a certain place by Tuk Tuk should be and use that as the base price when haggling.

Apart from car taxis and Tuk Tuks, many, especially those flying solo, opt for motorcycle taxis as the fares are much lower and they can easily weave through a traffic congestion.

Most taxis in Malaysia are notoriously unreliable what with many taxi drivers trying to charge higher by not turning on the meter, taking longer routes or simply blaming it on the rainy weather.

Even metered taxis can be very expensive, so avoid the Black and Blue taxis at all cost, and only sit the dingy red ones. Yes, the black taxis are newer cars but the absurd rate the meter jumps isn’t worth it. You never know if the drivers have messed with the meter’s settings. The base rate is also double that of the red ones, at RM 6 the minute you get on the taxi.

In order to counter this relatively absurd issue, our digitalized world now allows us to turn to mobile applications like Grab and Uber.

My personal farite is to use UBER which always seem to be cheaper and much more dependable than the ones provided by the local taxis since the meter is standardized and the routes they follow can be tracked through the apps.

The most dominant taxi operator in Indonesia is known as the Bluebird group and it offers customers a trustworthy metered service when getting to and fro various destinations. Unlike other operators in Indonesia, Bluebird is way more regulated and their drivers are all trained not to haggle.

Their executive service is the Silver Bird, which although starts at a higher rate, is also as reliably based on the meter.

It is still good to always ensure that the taxi driver from any denomination who is attending to your transportation needs uses a taximeter and do not be fooled when they offer fixed rates, instead of the meter fares.

Also, as a tourist that is more prone to becoming a carrier of big notes, it is best you make sure that you have small change as some drivers will insist that they do not have change and thus con you of your money.

When in Vietnam, get around by taxi relying on only 2 specific taxi company brands – Vinasun and Mailinh. These taxi groups use metered fares and are the most reliable.

It is common for other local drivers to imitate the design and logo of these two taxis however, so it is prudent that as a tourist, one should remain aware of the littlest details at all times when travelling around.

Apart from avoiding taxis in the areas dense with tourists, it is crucial for passengers to be wary when paying for the taxi fare at the end of the ride as some drivers can swiftly change out your notes for smaller bills and can leave you in a bit of a rut when they ask for the “correct” sum.

Much like in Thailand, many prefer to take motorcycle taxis as they are much cheaper and can maneuver through thick jams more speedily.

After getting past the fact that Laos is neither in Vietnam or Cambodia but is in fact a charming country by itself, people visiting this place have to take note that while most of the locals rely on buses to get around, the bus services may be a little slow and sometimes unruly.

Thus, most tourists should go for the taxis that can be hired for a full day within the city or a town at a affordable price between 30 – 60 SGD. For those who rather not hire one for the entire day should ask their drivers to switch on the meter or if they offer a fixed price, bargaining can usually get you a much lower price.

For a quirkier version of a taxi, Laos also has Tuk Tuks but they function a little differently from the ones in Thailand as the ones in Laos are considered to be public transport.

This essentially means that unless the Tuk Tuk is already fully occupied, other people can hop onto the vehicle along the road at any given time. The prevailing price for taking a shared Tuk Tuk ride is about 1 SGD whilst a private Tuk Tuk going long distance would start at a base price of about 9 SGD for ‘falangs’, a term used to refer to foreigners.

Some of the tales I have heard of taxi scams in Philipines are the most terrifying of them all, with twisted stories relating to how people get robbed, raped or murdered. It is still relatively indubitable that getting around by taxi in the Philipines can be the most efficient and so if you do choose to ride by way of a taxi, there are few things for you to be wary of.

Firstly, before getting into the taxi, make sure that the driver’s details and license plate number are all displayed clearly at the front of the vehicle and ensure that the driver turns on the meter before setting off, or that it hasn’t already been running for awhile.

Otherwise, politely decline the driver’s service and wait for another.

A cheap and quick way to get around Cambodia is on these adorable vehicles called the pedicabs (as pictured above). While many locals use pedicabs to get around, a more popular mode of transportation is a vehicle known as Motos.

Motos refer to motorcycle taxis and fare around the same efficiency. The issue with travelling via motos, however, is that not only is it very dangerous as it is not necessitated that passengers put on helmets but with more tourists becoming thrill-seekers and opting for motos, the prices have been inflated by quite a bit.

It is thus essential to learn the art of bargaining! Other than that, the same rules apply of asking for a metered fare on any taxi you are boarding.

In India, an interesting system wherein people can get pre-paid taxis has been implemented for a while now. People looking to travel from one location to another can simply find a pre-paid taxi booth and acquire a ticket which is to be given to the driver at the end of the ride.

This lessens the burden of having to worry about the taxi being metered or overcharged as you have already paid for the ride beforehand.

Do note that if there’s a cow crossing, taxis will just stop and wait to let these sacred animals pass.

Besides travelling by way of a pre-paid taxis, people can opt to get around on these quirky three-wheeled rickshaws as they are cheaper and add to a fuller ‘Incredible India’ experience. One issue with these rickshaws, however, might be that you would have to negotiate a price with the driver before hopping on.

Unlike most of the countries listed above, the taxi fares in Hong Kong are accorded to a fixed meter system so no haggling is permitted and only cash is accepted. Most taxis can usually just be flagged down along the streets but during peak hours, it’ll be smarter to find the closest hotel or taxi queue as the taxis can be more easily acquired there.

Cab drivers in Hong Kong aren’t the most hospitable bunch and some might not even stop for you. If you see a vacant cab with its lights on in the middle of the road, just open the door and get in and tell him your destination.

Do note that there is also an individual ‘luggage’ fee for large bags placed in the boot or even in the backseat, so look out for that. Certain expressway tunnels as well will require extra toll fees to use. 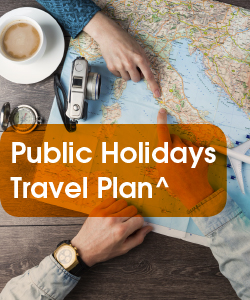 Although travel insurers can’t cover you for scams, I hope this article has given you great tips on preventing taxi-related scams overseas.

Nonetheless, it is still a good idea to be insured for other travel hiccups like flight cancellation or loss of luggage to prevent any further expense. Travel at ease knowing your interests are protected.

A new travel insurance specially for travelers who utilise public holidays to travel is now available from as low as $98.

The policy is valid for Worldwide travel over the next 12 months from your policy start date, for up to 10 days each trip as long as one of the travelling dates in each trip is a gazetted public holiday in Singapore. Terms and Conditions apply.

*This post was brought to you in partnership with NTUC Income

Previous articleBest Bars in Singapore: Where Bartenders Really Drink When They Aren’t Crafting Your Cocktail
Next article15 Best Cafes in Melbourne so good, you Melbourne a hole in your wallet