Located at McCallum Street, the space seeks to give city-goers and white-collared workers a space to chill and relax at the end of a long work day. Think reinvented cocktail classics, artwork by local and regional artists, weekly DJ nights, and even occasional performance by poets or actors. 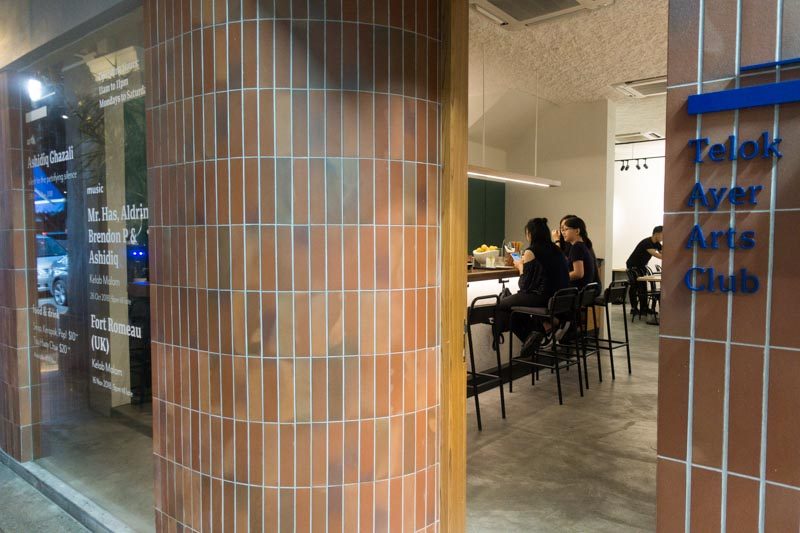 Handmade terracotta tiles line the front of the restaurant, which is supposed to mimic the iconic brick-faced buildings of Singapore’s past.

The brown and aged exterior reminded me of old-school libraries, especially with the blue name signage designed just like the old National Library… How nostalgic! 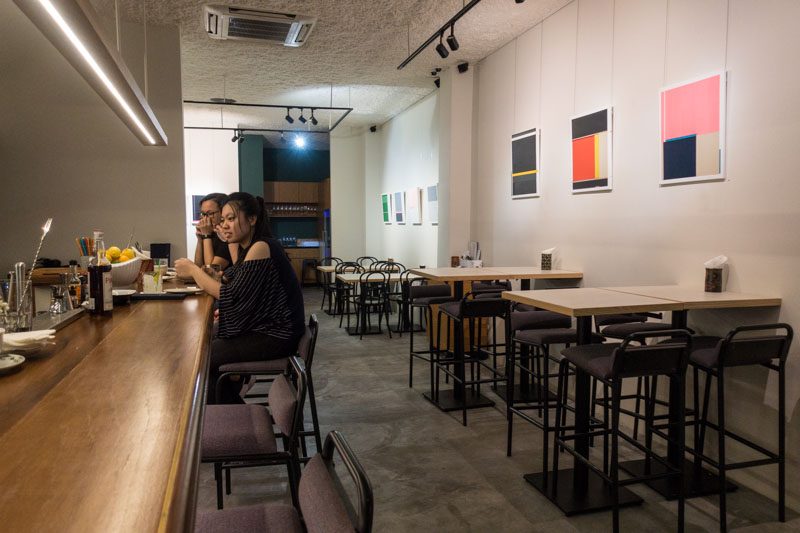 When we were there, London-based Singaporean painter Ashidiq Ghazali was exhibiting his solo exhibition titled “silent in the petrifying silence”. Bright and colourful geometric paintings lined the entire restaurant, and it added a bold splash of colour to the stark white walls and cement flooring of the restaurant.

Though there were no live performances or DJs spinning while we were there, we were presented with Telok Ayer Arts Club’s all-day dining menu, which featured rustic and comforting French-Mediterranean food with bursts of Asian flavours. Starting the dinner off was its Dumplings (S$11+), which was a twist on our local fried wontons.

The deep fried dumplings were filled with shoyu and sesame oil-seasoned chicken and pork. Crispy and salty, this bite-sized snack had a wedge of smooth bocconcini cheese in the centre, which burst when we bit into the filling, resulting in a creamy, almost milky mouthful of flavour.

Though the dumpling skin was a little oily, I enjoyed the surprise burst of cheese in the centre, and relished in the basil & coriander dip, which was sharp, tangy and creamy. 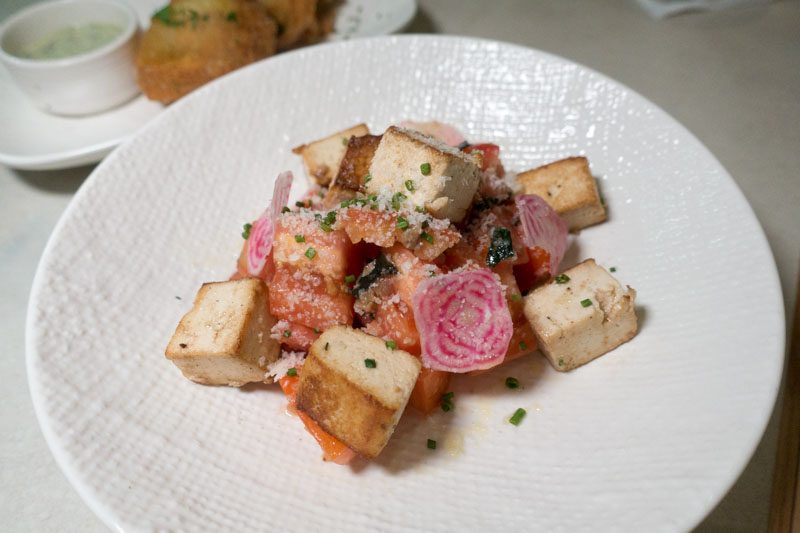 An Asian twist on the traditional Italian caprese salad, the Tomato & Tofu (S$14+) is a vegetarian salad dish that I absolutely loved.

The square chunks of beancurd were marinated in a housemade miso sauce and toasted, giving it a crispy, firm and salty outer skin. Yet when I bit into the beancurd, it was soft, sweet and melted into my mouth, almost like cheese.

It was accompanied by diced tomatoes which were tossed in red wine vinegar, which gave each bite an acidic finish. Smoky with tinges of barbecue and tangy flavours, the Octopus & Shrimp (S$18++) had been cooked slowly in citrus and white wine vinegar.

Each piece of seafood was coated with sha cha barbecue sauce, which immediately reminded me of traditional Chinese stir-fry dishes that use this savoury and slightly spicy sauce. The sweetness of the fresh prawns went hand in hand with the tartness of the citrus and white wine vinegar, resulting in a zesty and refreshing burst of saltiness and sweetness. 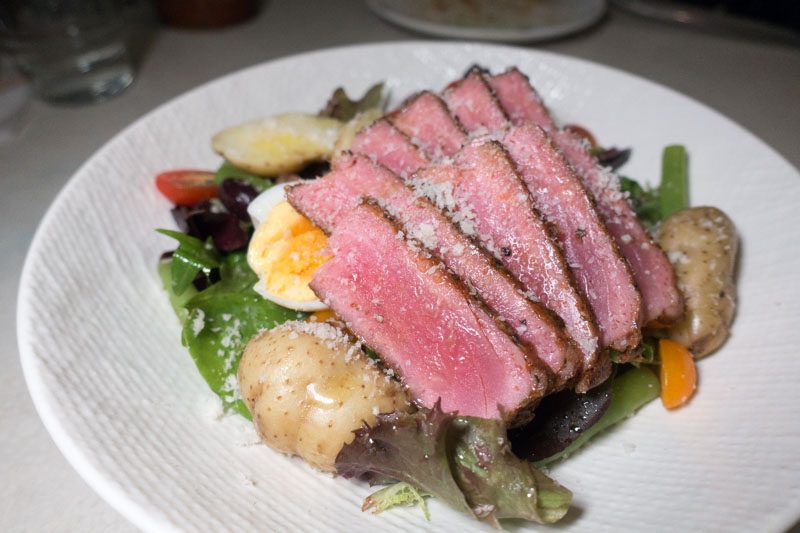 The Tuna Nicoise Salad (S$17++) was my personal favourite dish from the dinner. Though the rest of the salad was pretty ordinary, with mesclun salad greens, hard-boiled eggs, French beans, ratte potato, grape tomatoes and kalamata olives, the hero of the dish was definitely the tuna.

The tuna loin had been rubbed with a dry spice mixture including paprika, sugar, salt, lemon zest and oregano, and then seared tataki style — cooked very quickly over a high heat, resulting in a gorgeous burnt sear on the outside while the centre is still raw.

The tuna melted in my mouth and the seasoning from the sear left behind a peppery and salty aftertaste in my mouth, which was a real delight. It was accompanied by a rosemary lemon vinaigrette, which was vinegary and piquant, and coated the tuna with a thin layer of smooth oil, like butter. Vegan lovers should definitely try the Cauliflower Steak (S$19++). Cauliflower heads were smashed lightly and charred to form a flat “steak”, and then glazed with a light bechamel sauce made from melted scamorza cheese. Topping the dish off were pine nuts and a generous sprinkling of parmesan cheese.

With scallion aioli, scarmorza and smoked paprika, this dish was so packed with flavour that it even converted me, a diehard carnivore fan. The cauliflower heads were tender and sweet, while the melted scamorza cheese was smoky and had a tinge of sharpness to it.

Though it’s nothing like a piece of well-cooked steak, this vegan version tasted as though you were eating an entire chunk of melted, honeyed cube of zesty cheese, and I loved it. 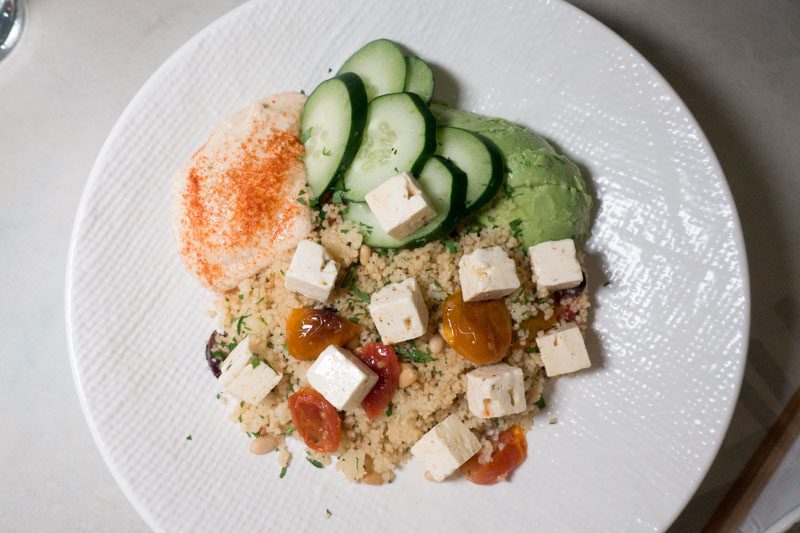 Though the couscous itself could have used more seasoning, I liked the flavours from the tartness from the sundried tomatoes, as well as the tanginess from the feta cheese. The hummus was slightly smoky, nutty and incredibly creamy. 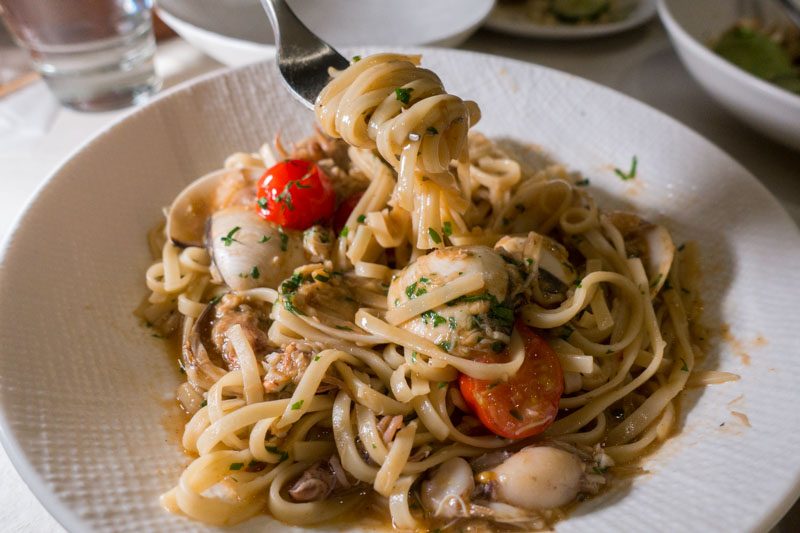 Though the Seafood Fettuccine (S$25++) was bathed in a rich seafood stew, it had none of that fishy taste. Instead, it was briny, while the little neck clams, crab meat and baby squid were incredibly sweet and succulent.

The stock base itself was reduced from boiled vegetables and roasted prawn shells, which is an Asian take on the traditional French boullabaisse stew. Full-bodied and sweet, it had a light mint-like tinge from the coriander, and left a smoky aftertaste from the sprinkling of cinnamon. The Locally-Bred Spatchcock (S$28++) was certainly an interesting dish on the menu that I looked forward to trying. Roasted in honey, butter, paprika and herbs, this was Telok Ayer Arts Club’s Asian twist on the traditional French roast chicken.

One thing that they did really well with the spatchcock was the highly addictively crispy and smoky skin, and a juicy interior. The secret is brining the spatchcock in a salt and sugar mixture for a few hours before leaving it to dry for a full day in a chiller. Accompanying my dinner was a Singaporean Sling (S$22). A Southeast Asian classic, this refreshing beverage was made with gin, pineapple juice, lime juice, pomegranate and soda.

What hit me first was the sourness of the pineapples and lime, and then the sweetness of the pomegranate and bitters settled onto my tongue in a pleasant aftertaste. I loved it that this drink was presented so prettily as well, with dainty baby’s breaths and a torched dried orange slice, perfect for the ‘gram.

I thoroughly appreciate that Telok Ayer Arts Club is trying to make art, music and culture more accessible to the general public.

Yet while I was there, most of its diners were just there for its food and drinks, and it was difficult to fully appreciate the art lining its walls when there was zero information present about it. Plus, there’s just so much that the cosy space was trying to offer that it got to the point of confusing.

Though, I’ve got to say, the food was absolutely delicious. The mains were a little pricey and some were hit or miss, but I loved the Tomato & Tofu and Tuna Nicoise Salad and would definitely come back again with my friends for a drink or two after office hours.