With all the hype that health foods are receiving, it’s still hard to fathom that leafy greens can be just as tasty and appetising as meat options. I for one, cannot live without my steaks and chicken breasts, even when I’m digging into my all-time favourite cuisine — Japanese. 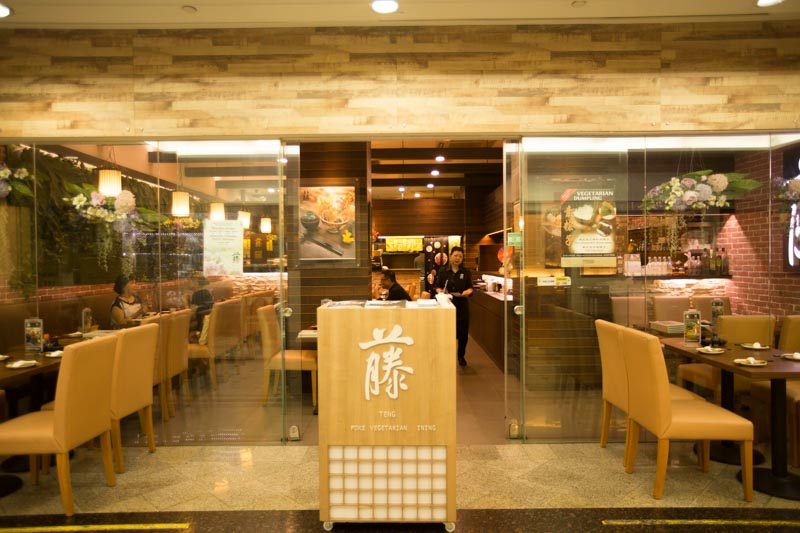 That’s why when I heard about Teng Bespoke Vegetarian Restaurant, I was amazed to see that they offer a vegetarian version of salmon sashimi. I needed to be convinced that it could be just as satisfying, so without haste, I headed down to Sunshine Plaza. 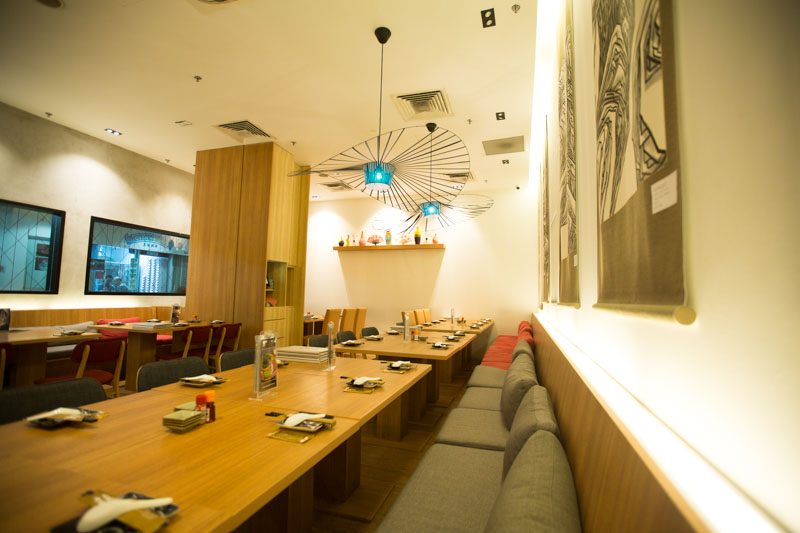 Their dining area is split into two units, both facing one another. I chose to seat myself at the one that was bathed in warm light for a cosier ambience, which I would personally recommend you do as well. 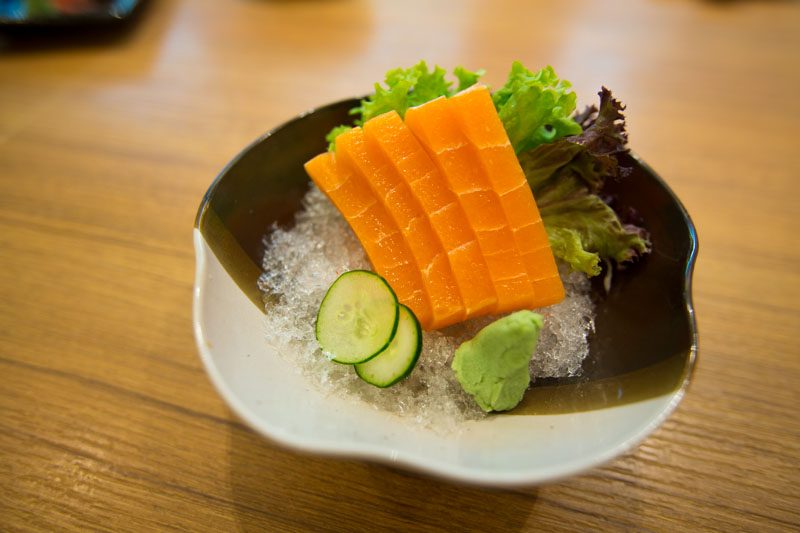 My appetite was opened by the single dish that brought me to this place – the Salmon Sashimi ($9). I picked it up with my chopsticks to closely inspect its texture and look; it sure felt like the real thing holding it up close. However, on the first bite, it really didn’t taste much, and the mouthfeel was a mix of spongy and springy (it’s weird, I know).

I quickly learnt that to replicate the real thing, konjac jelly is used. I was so looking forward to having it very closely simulate actual salmon sashimi, but alas, there is only so much you manipulate meatless ingredients. 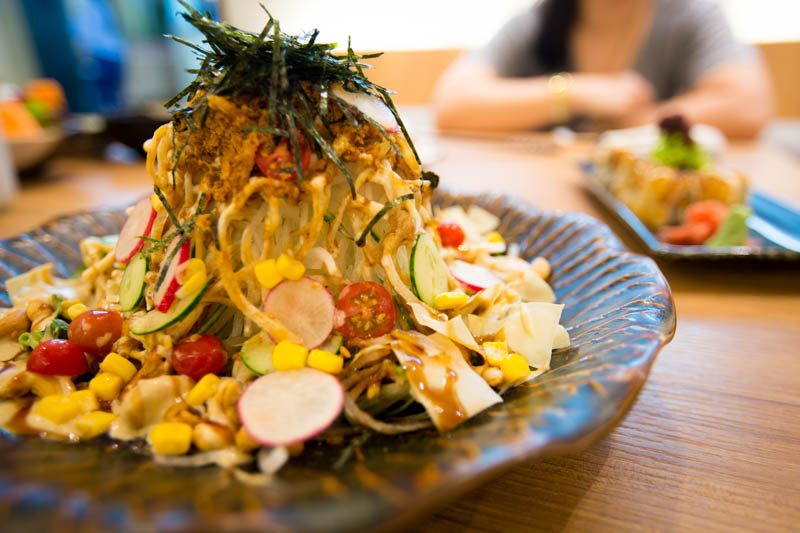 Next, I was served a hearty portion of White Radish ($15), a super-sized salad that comes with handfuls of the shredded radish, peanuts, baby tomatoes, corn and cucumber. It is then topped with seaweed and drizzled with a homemade peanut-based dressing that is apparently a secret recipe kept by the chef.

There were plenty of textures going on here, and if you’re bored of plain green, leafy salads, this one is a great savoury option, thanks to its really addictive dressing. 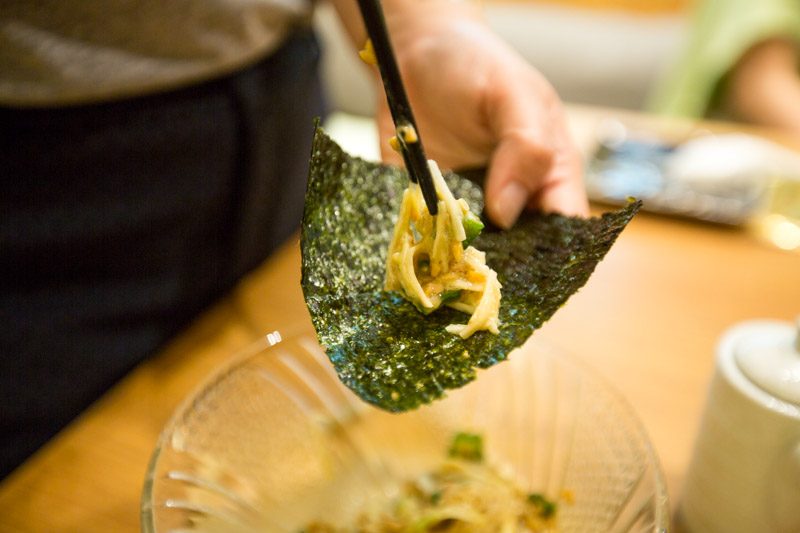 I also had my first taste of natto, with their Nabanaba ($13) dish that was served in a glass bowl, filled with natto, lady’s fingers and Japanese yam. I actually am a huge fan of fermented soybeans (read: tempeh), but this one, I have to admit, I struggled to swallow.

Mixing all three ingredients with a douse of soya sauce, the gooey concoction is placed on a seaweed sheet and rolled up before being eaten. I had a go at creating one natto roll, and that’s all I could muster. Clearly, it’s an acquired taste, as it feels pasty and sticky in your mouth, all while tasting salty (from the soya sauce) and ending on slightly sour and bitter taste at the same time. 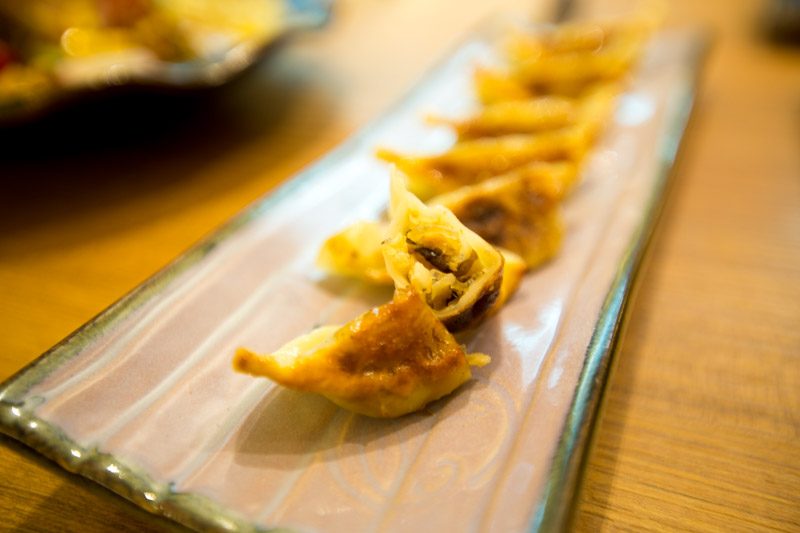 Thank God there was Japanese Gyoza ($9) to save my palate! Typically filled with minced pork, these tiny tots were filled with black fungus mushrooms, and were so aromatic on the first bite. There were just as addictive as their meat counterparts, and before I knew it, they were all polished off. 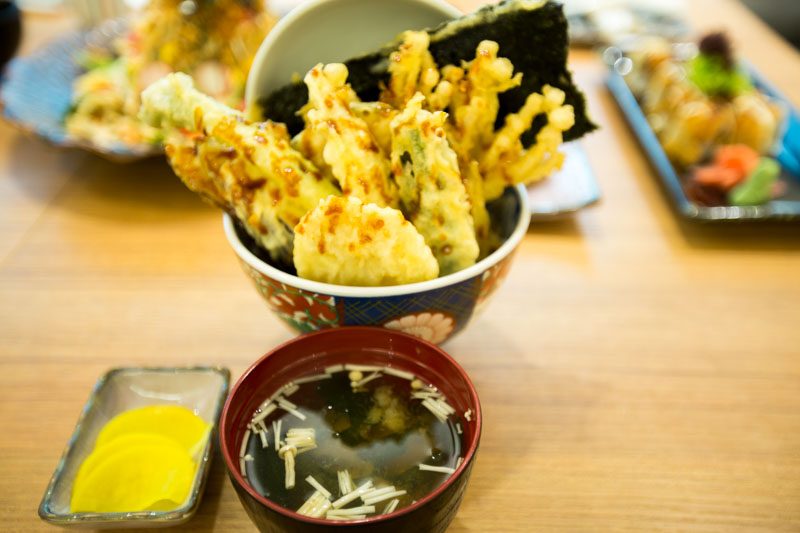 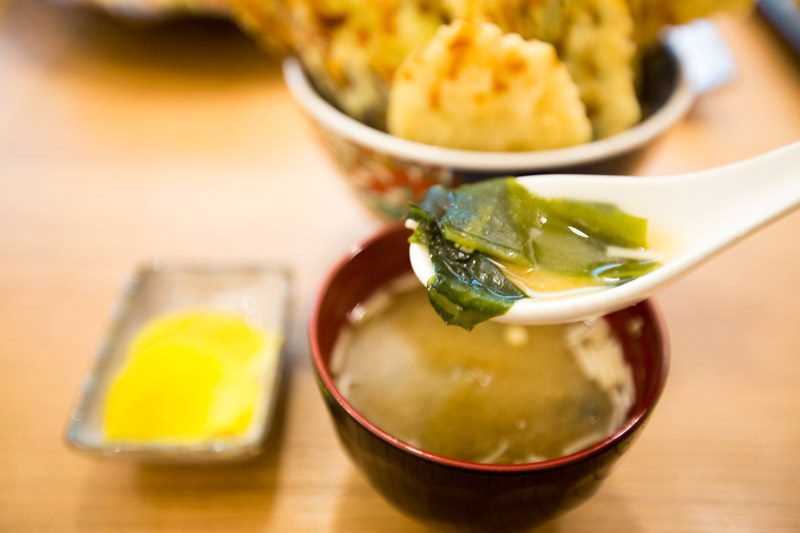 New to their menu since August 2017, is the Vegetable Tendon With Miso Soup ($12.90). Who doesn’t love deep-fried Japanese food? Needless to say, this was an easy favourite as the vegetables were fried to a perfect crisp. The vegetables include mushroom, asparagus, lady’s fingers and even a whole sheet of seaweed. Even the miso soup wasn’t too salty, which can sometimes be the downfall of an otherwise great Nippon meal.

All in all, I would return here, if not for the highly anticipated vegetarian salmon sashimi, then definitely for its tendon bowls. They definitely do their deep-fried dishes right here, and that Nabanaba salad was simply refreshing.

The next time you have a craving for Japanese cuisine, why not give this meatless version a chance? If I, who considers myself quite the carnivore, would come back for seconds, then there’s plenty to be said about the food here. ‘Tapau Please’ by SethLui.com: Epi #053 — Untangling the complexities of...