The Pelican Seafood Bar & Grill: Bringing out the best of seafood 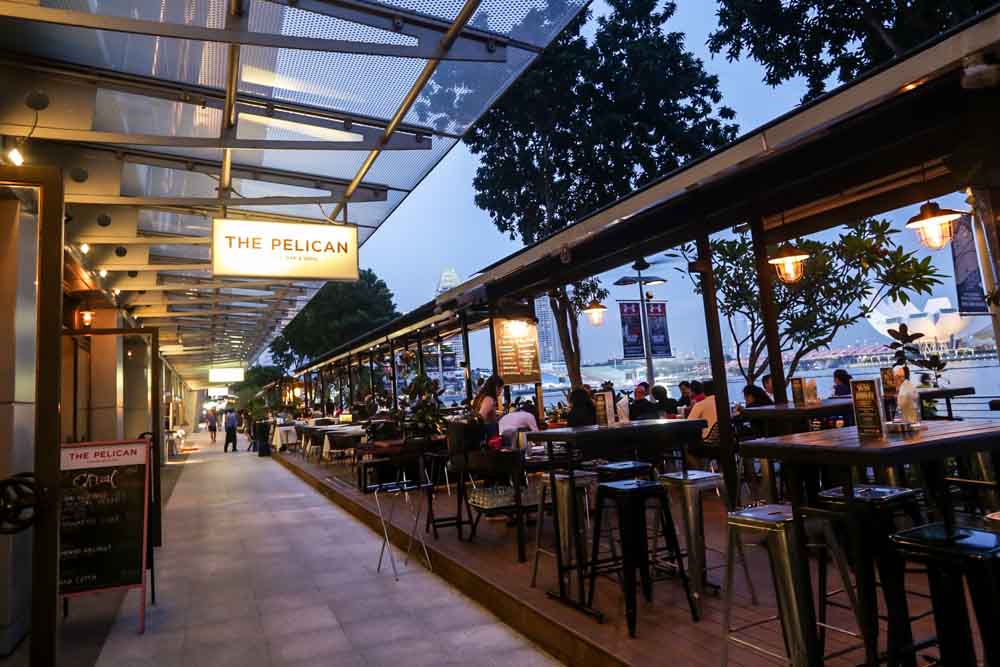 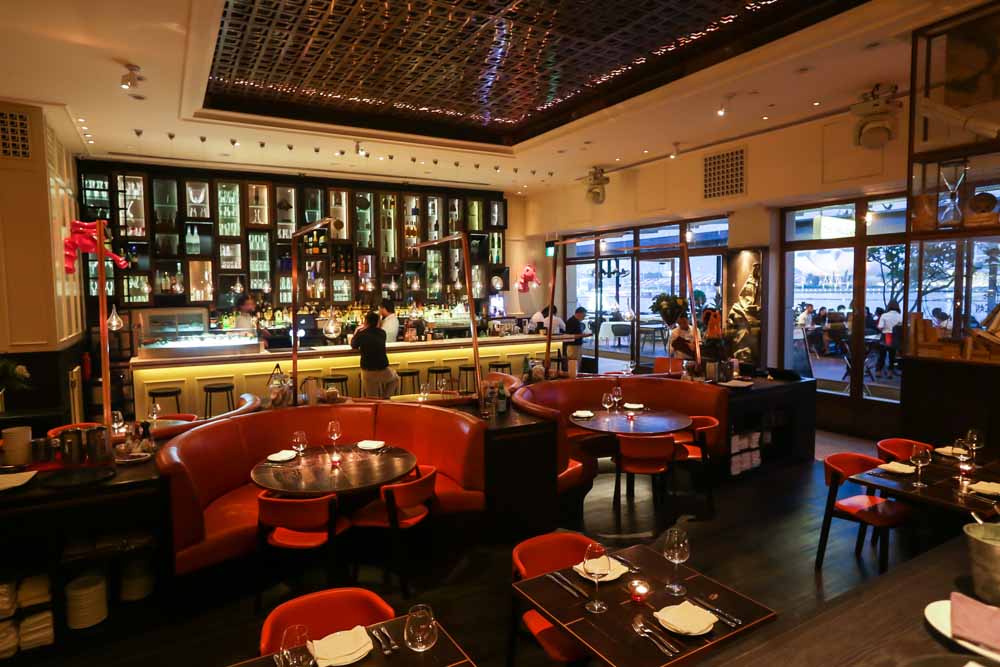 Guests get to enjoy a wonderful bay view while dining alfresco while for those like myself preferring a less harsh temperature in our simmering little island, diners can also sit inside the cosy restaurant. Besides, you get to catch the chef in action indoors as he delicately prepares seafood behind Pelican’s latest feature – Raw Bar. So what’s the Raw Bar? This grand seafood showcase serves a selection of exquisite oceanic classics like Whole Maine Lobster, Brown Crab, Oysters and a range of exquisite roe and caviar. 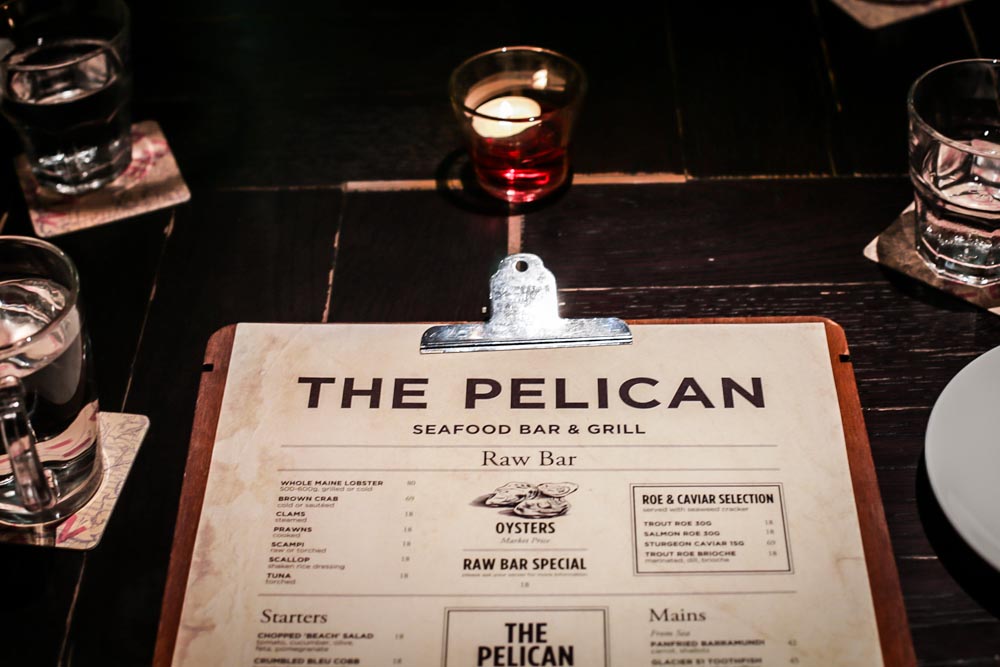 Chef Jonathan Sparber has also introduced a curation of new menu creations to thrill diners further, utilizing fresh seafood with ingenious reengineering for the discerning palate. I’ve kindly been invited for a tasting at Pelican Seafood Bar & Grill for dinner and am pleased to present my little field report. 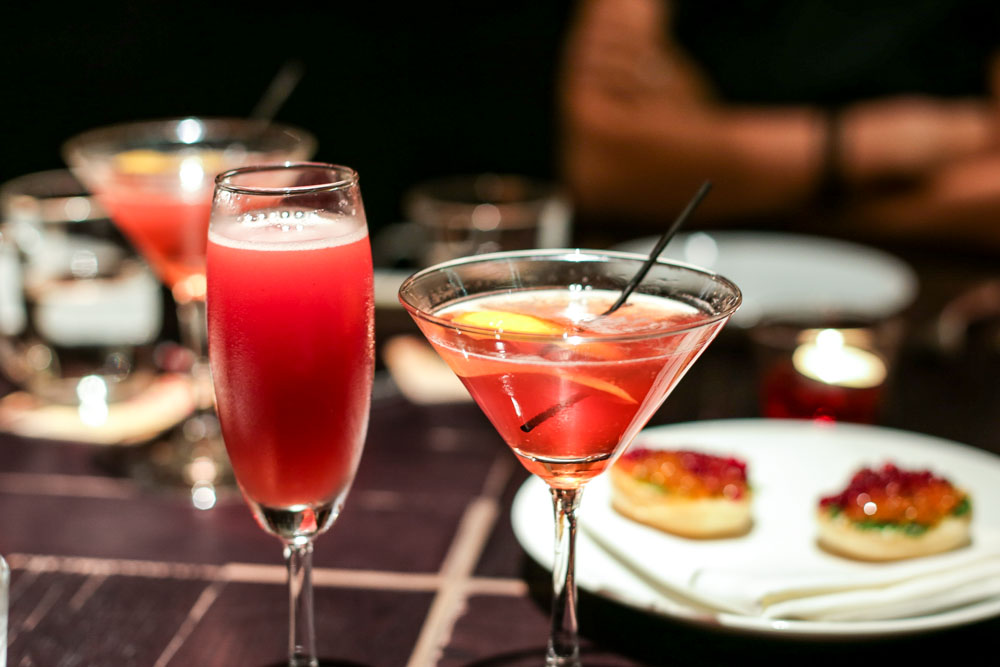 Of course, you can expect great cocktails like the Pelican ($21) and Marco Polo ($21) which play on sweet and sour fruit elements and a dash of sparkling Chandon to balance out the flavours. 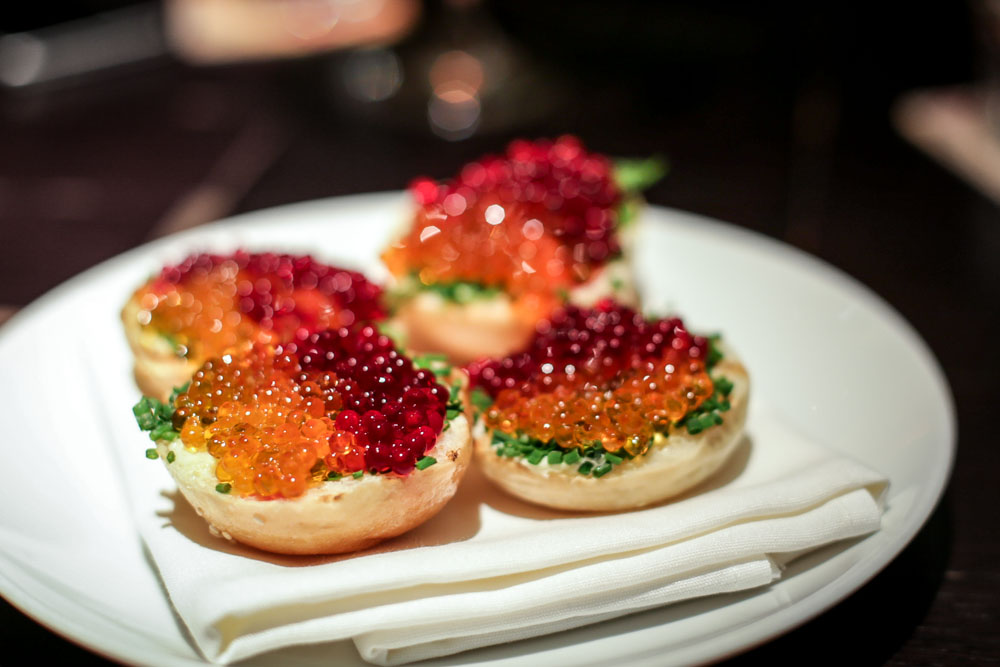 We kicked off appetizers with selections from the Raw Bar, beginning with the Trout Roe Brioche ($18). The red trout roe half was marinated in beetroot more for aesthetic purposes than anything. This roe has a firmer, bouncier bite as compared to the similar looking Salmon roe, but doesn’t have as distinct an oceanic flavour.

Gets a little messy to eat as the balls start rolling off with each bite, the roe still lends a salty finish atop the buttered brioche to stimulate an appetite. 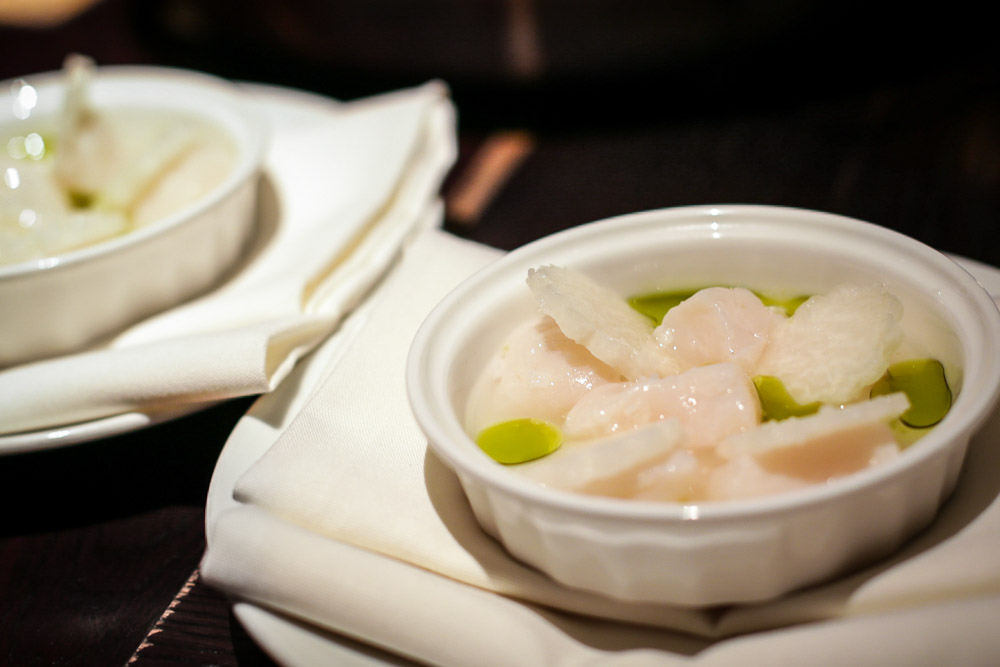 Scallop ($18). Comes with shaken rice dressing (blended rice basically) and turnip which adds a little crunch. The dressing has a tad denser body than usual dressings, and compliments the scallops really well with its milky texture. Scallops were fresh, sweet and more interesting than the usual seared scallop. Scampi ($18). We had the torched version while raw scampis can also be arranged. The yellow puddle of reduced seafood stock with butter really upped the umami factor of the scampis with multiple dimensions of subtle torched flavour blending with seafood savoriness.

This was an absolute crowd favorite amongst the table with praise for the seafood stock. 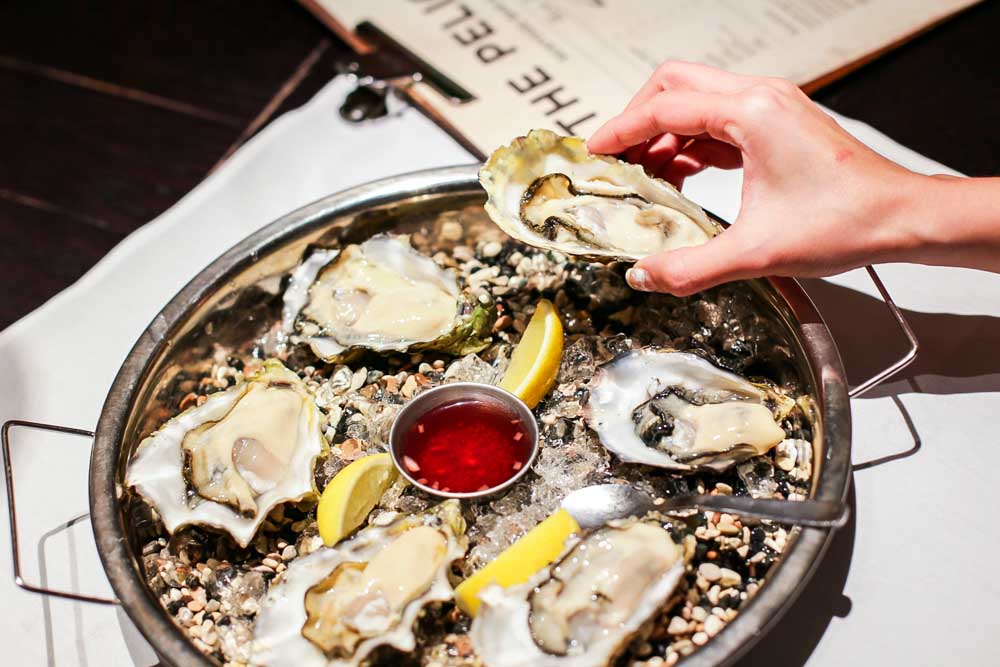 Further delving into the seafood theme, we next tried the seasonal Canadian Fanny Bay oysters ($8 per piece) and also the French Speciales Oceanes ($9 per piece).

Freshness is quite a given, so it all comes down to personal preference of what oyster you prefer. The Fanny Bay Oysters have a firm meat with a mild creamy brininess and a finish that resembles cucumber. This was my preferred oyster for its creamy texture.

The Speciales Oceanes on the other hand had a more pronounced brininess and a nutty finish which wasn’t as much my thing. 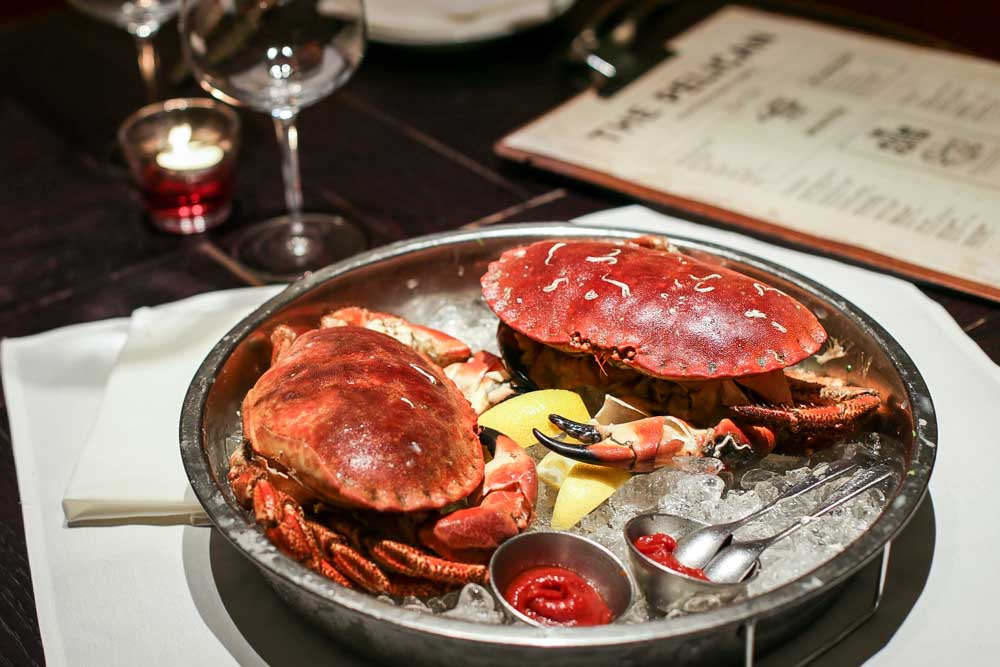 Brown Crab ($69). Simply boiled and presented cold, the freshness and natural sweetness of these North Ocean brown crabs can be savoured in all its glory. These large brown crabs are wildly popular in Europe and has a sweeter, delicate flavour compared to our local Asian varieties. 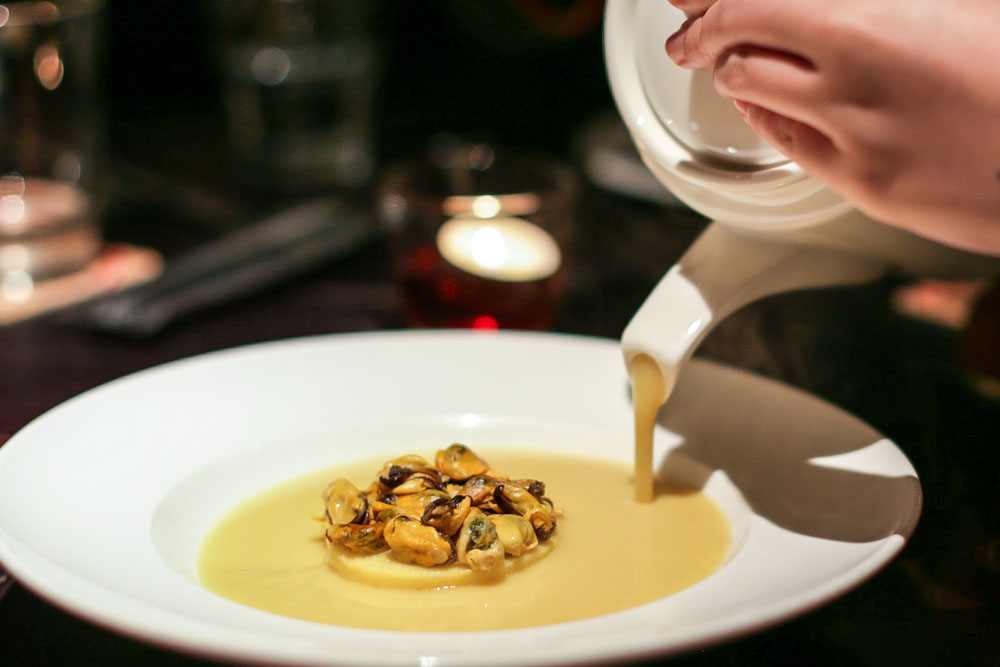 Cream of Corn ($18). This dish was presented quite differently from what I imagined from its name, coming with a bed of polenta cake and small French mussels atop. The cream of corn soup, made from corn and onions, is then poured from a pot onto the dish.

Rather than the one-dimensional sweet corn soup you usually get, the polenta adds more body while the sweet mussels compliment the soup well for a seafood twist to the cream soup. Old Fashioned Crab Cakes ($24). The breaded crust of these crab cakes could be a bit thicker so that there’s more contrast in textures and some crisp, but other than that the generous lumps of crab cake goes well with the pickled slaw to add a bit of acidity. 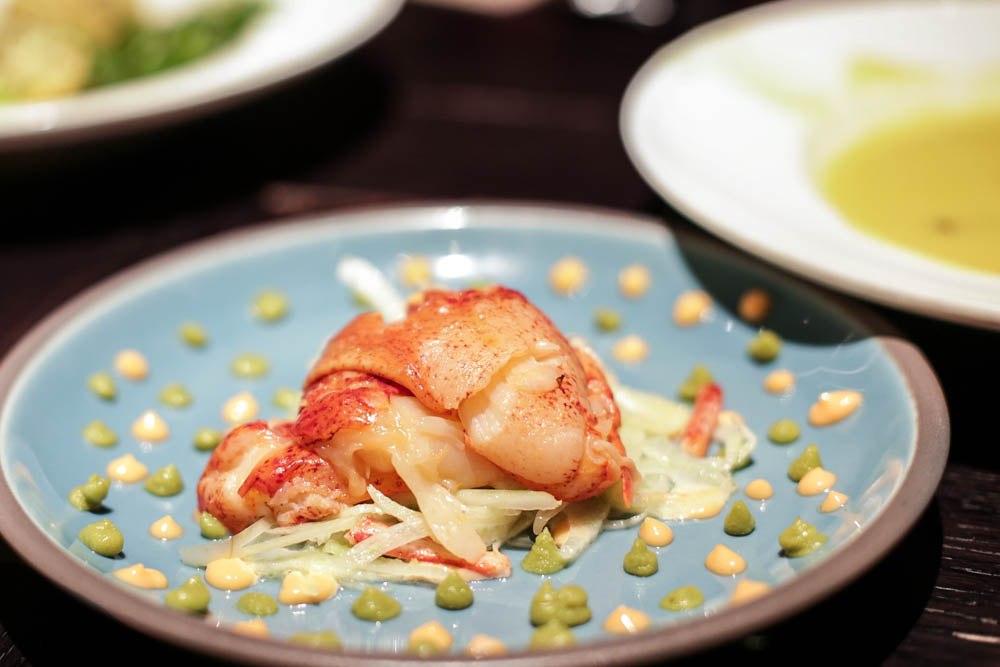 Poached Lobster ($28). The little droplets on the plate are salad avocado puree (green) and a homemade ‘marie rose’ sauce (yellow) which is also known as cocktail dressing. This marie rose sauce is made from boiling lobster shells for that umami flavour.

Beneath the very tender lobster meat is fennel which seems to be have been pickled, adding some sour juices that accompany seafood well. 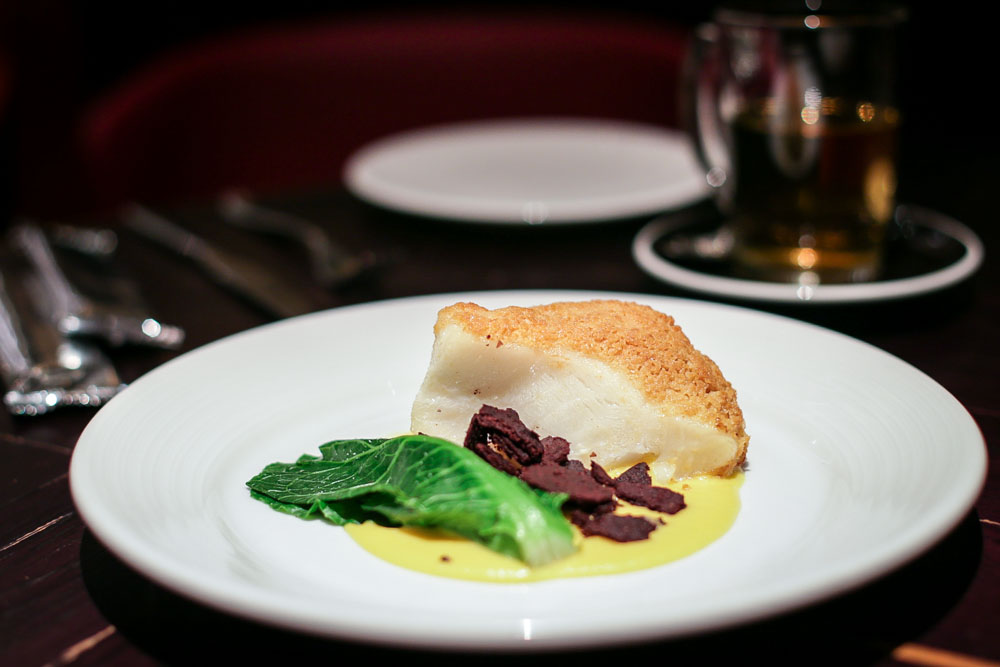 Roasted Patagonian Toothfish ($45). The Patagonian toothfish is sadly a fish that’s not ever going to win a beauty pageant, but it’s what’s inside that counts isn’t it? Breaded with a brioche crust, the fish is also accompanied by a dried olive puree with saffron corn sauce. The token vegetable is hardly worth a mention.

Toothfish tastes amazingly like cod with an oily texture that’s so hard to cook right. The olives match the oiliness of the fish with its acidity, while the crust makes each bite less dull since the meat is naturally soft. 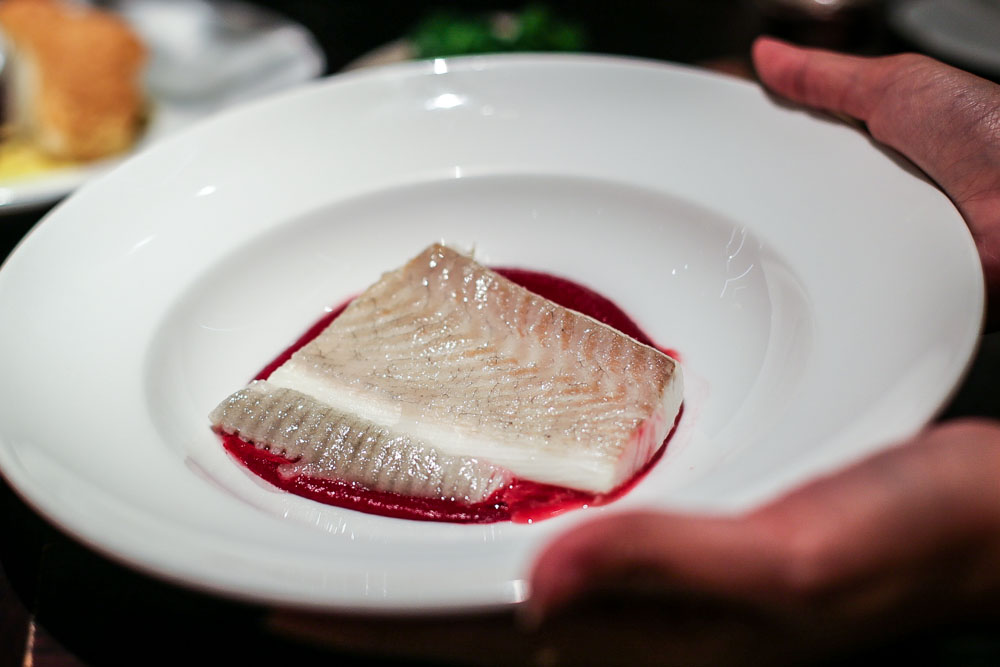 Steamed Halibut with beetroot (Daily Catch). A very simply steamed fish dish, but frankly quite boring in appearance and taste. Fresh, yes, but could be more innovative. 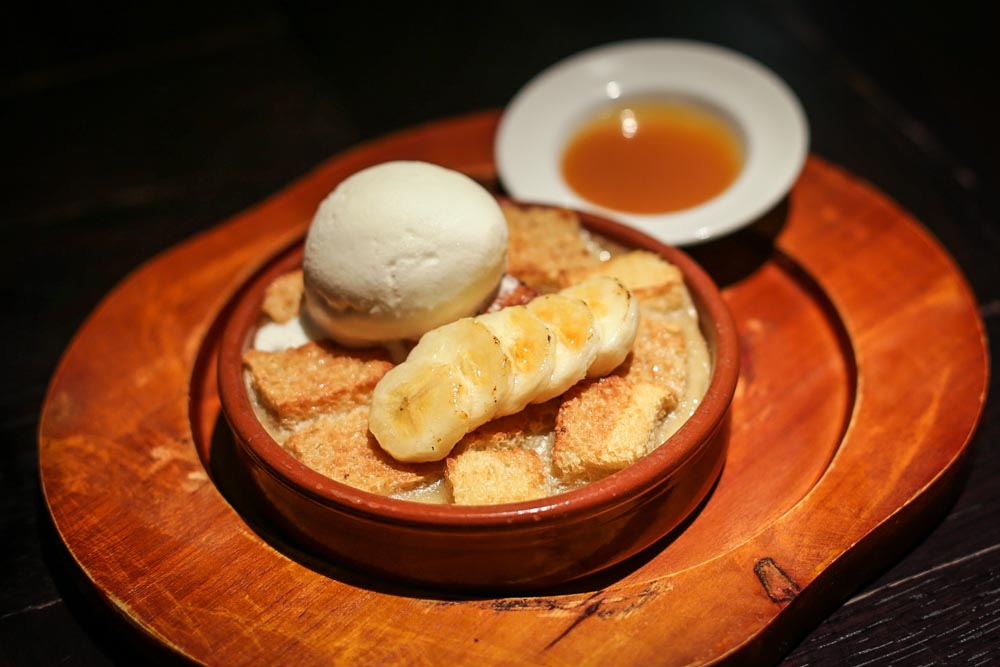 Banana Bread and Butter Pudding ($16). A very homely dessert to satisfy the still hungry dinner guest, it was a bit too filling for me though as I hardly had any stomach space left. 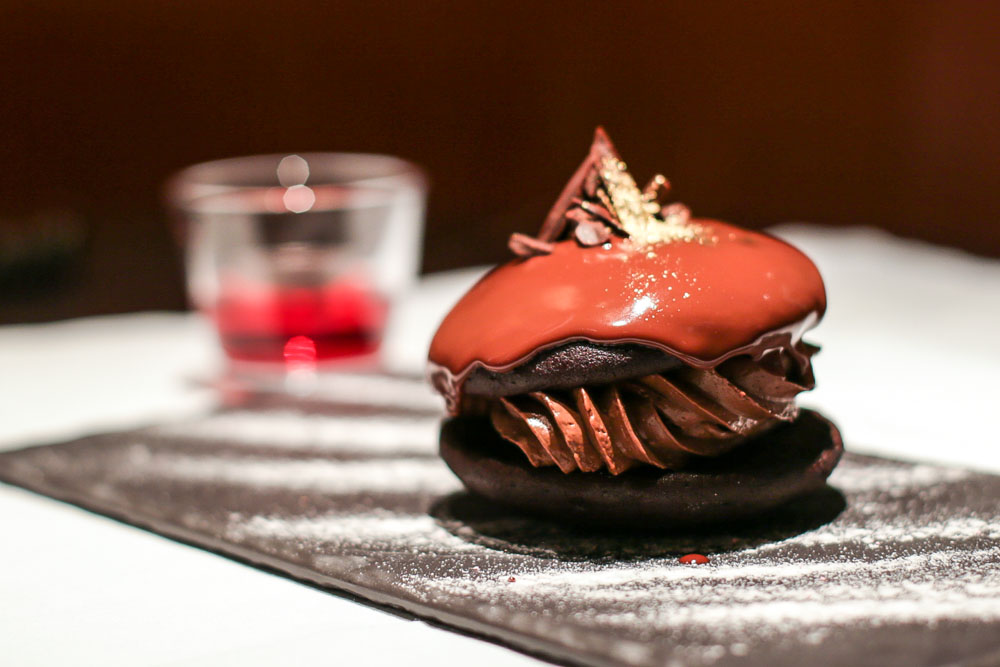 Whoopie Pie ($16). With extra whoopie. Two Chocolate cakes sandwiching more chocolate filling, the dark chocolate flavours were suitably intense but a tad lacking moisture in the cakes. Chocolate lovers will love it though. Homemade Ice Cream ($5). The flavours of the day we got to try were Licorice and White Wine with Sour Cream. Needless to say, if you’re not a fan of Licorice you’re not going to enjoy this.

The white wine with sour cream was an interesting blend though, with subtle tart flavours resembling a sorbet.

Chef Jonathan Sparber has spent enormous amounts of effort to bring out the full natural flavours of fresh seafood, most of the time resulting in seemingly simple dishes that will take you by surprise. Well, the halibut was an exception as it tasted exactly like how it looked, but the rest of the seafood served at Pelican Seafood Bar & Grill has been carefully curated with crafted recipes that aim to bring out the utmost potential of their oceanic harvest.

Great for date night, I’d recommend Pelican Seafood Bar & Grill for anyone who appreciates chefs who do seafood justice.

Don’t forget to check out the pelican boil as well which presents a plethora of seafood boils for some unconventional hands-on dining.