TXA Pintxo Bar: Immerse Yourself In A Basque Kitchen For A Romantic Night At Alkaff Mansion

In its heyday, Alkaff Mansion was a dining destination for some of the poshest dinners and one of the top choices for people to host galas, weddings and other private events. After having gone through numerous tenants fill its floors over the years, it has now become the home of TXA Pintxo Bar. 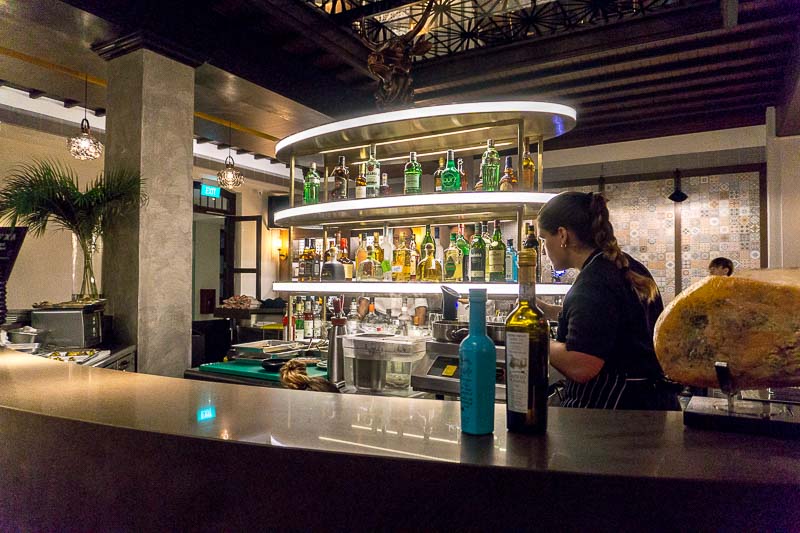 The renewed vision for Alkaff Mansion has been introduced by the 1-Group, with Chefs Marta Elvira Segalés and Silvana Pascual Romero heading TXA Pintxo Bar. On the second floor sits UNA’s new abode, having shifted from the now-government-reclaimed Rochester Park. 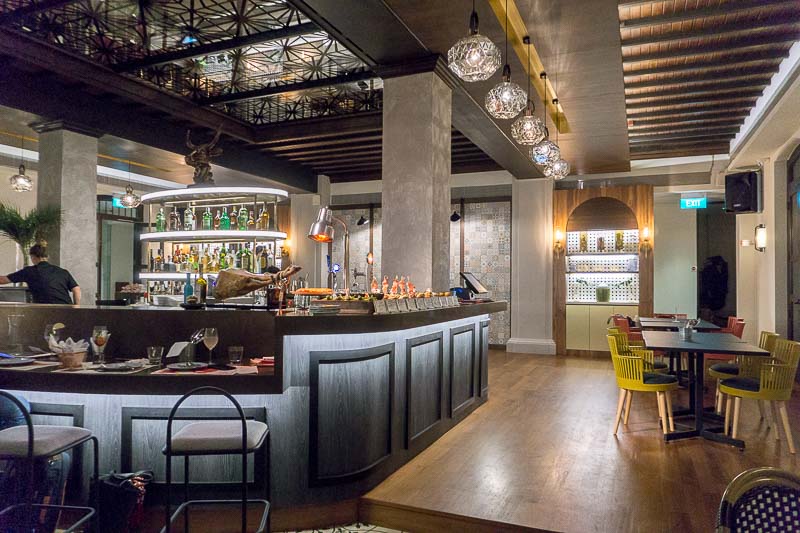 The decor is warm and inviting, with great use of dark wood that helps bring warmth and romance to this majestic space.

With so much history contained within these four walls, it’s fitting for Basque gastronomy to have its turn in the limelight. They’re the first in Singapore that’s specifically dedicated to highlighting the beauty of sharing pintxos (pronounced ‘pin-chos’) with friends. 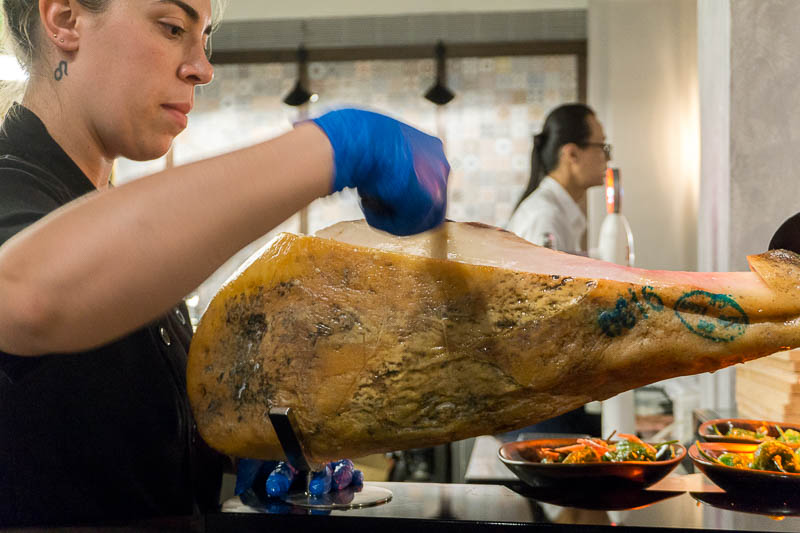 It’s also quite adorable how the letter combination ‘txa’ that’s unique to the Basque language, forms the sound ‘cha’. Incidentally, it occurs in Hokkien to mean ‘noisy’, and in Cuban culture, it inspires the dance cha-cha.

As such, expect a dining experience that’s meant to be vibrant, lively and brimming with excitement. Bonquerones Con Piperrada (S$3.90 per piece) was a delicate start, with European anchovy being the star produce of this bite. The sauteéd peppers gave off a sweet note, in addition to lending its texture to contrast with the crisp bread.

The flavours were light and pleasant, perfect for the colourful spread I was about to indulge in. 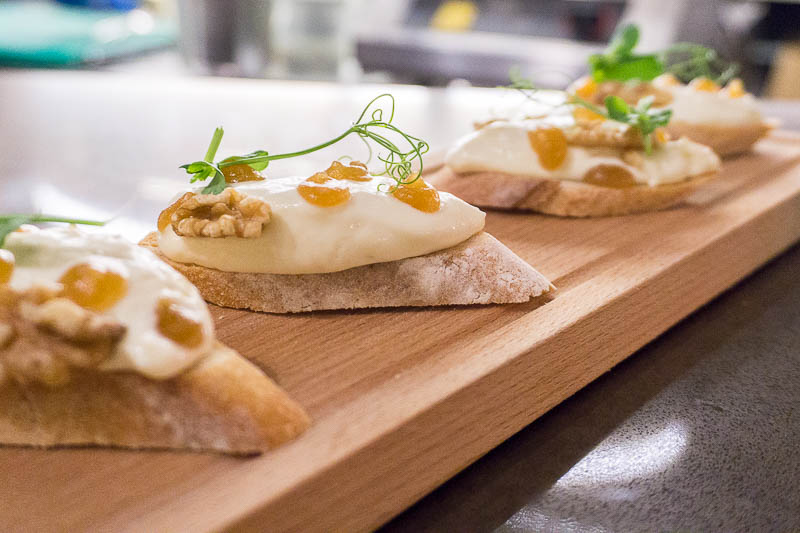 Their Crema De Roquefort Con Manzana Y Nueces (S$4.90 per piece) was a marriage of sweet and savoury as the Roquefort cream was light yet absolutely fragrant. The apple jam was the acidity that it needed, and given how delicious it was, I wasn’t complaining.

I’m an avid lover of peppers and things that can bring heat to a meal. Pimiento Del Padròn (S$12, with the option to top-up S$3 for Jamòn Ibérico de Bellato 5J) is a simple serving of fried Padron pepper, topped with a dash of sea salt. There were no frills to this sharing appetiser, but they proved to be quite the crowd favourite.

We had ours with additional Jamòn Ibérico, and it was like a scramble to see who could snag the last piece. Get a taste of what home should be, with their Croquetas De Jamón Ibérico (S$14 for four pieces). The insides were like a creamy mushroom soup laced with bits of bacon for that heightened savouriness. There really is no elegant way of describing how comforting these fried pops were, but they tasted like they were made with immense love for filling a hungry belly.

I shamelessly scanned the dining table for any uneaten portions of this and polished them off. Another memorable dish was the Txangurro A La Donostiarra (S$14 for two pax), which is gratinated crab baked into its own shell. The first bite reminded me of lobster bisque. The crumble on top was satisfying, to say the least, and I couldn’t resist from helping myself to extra shells that lay around.

As you can tell, it was one of those nights that I didn’t mind being the scavenger of the group. But everything was too good to go to waste, even as I was growing more and more satiated. By this point, most of us had to be choosy with what we’d fill our already-full bellies with, given that we still had a few more dishes to put away. Out came the Black Rabas “A Fuego Negro” (S$22 for five pieces), and it was surprisingly great! I was expecting to bite into a springy ring that’s smothered in fried batter. However, I discovered it’s actually squid ink encased in batter, resulting in a creamy centre and a crisp shell. The squid ink’s natural saltiness was quite pleasant and addictive as well.

I reckon if we’d had this served earlier on, we’d be able to enjoy this more. The caramelised apple cubes were tart enough to cut through the fattiness, culminating in a dish that was worthy of signalling the end of a very satisfying dinner. There’s always another stomach set aside for dessert, as I always say. And the Tarta De Queso “La Viña” (S$4.90) is a pedestrian cheesecake to the eye, but its airiness is what makes its simplicity a God-send. After indulging in rich, heavy and very gratifying plates, the simpler the dessert, the better.

The cheese taste isn’t cloying, and neither is the lasting feeling that most cheesecakes leave behind after a few bites.

Despite the rather out-of-reach location of Alkaff Mansion, the ambience here is unrivalled. This secluded mansion has seen numerous establishments make its grounds their home, but its charm still remains.

What better way to revive this iconic estate than to give diners a taste of something less middle-ground, and something unusual? It’s worth a trip out to Telok Blangah and to immerse yourself in a Basque kitchen.

ChopeDeals: Save up to 10% at TXA Pintxo Bar at The Alkaff Mansion >