Back again this year with more interesting stalls and food options, the Geylang Serai Bazaar is one of the hottest (literally) places to be from now till 14 June 2018. 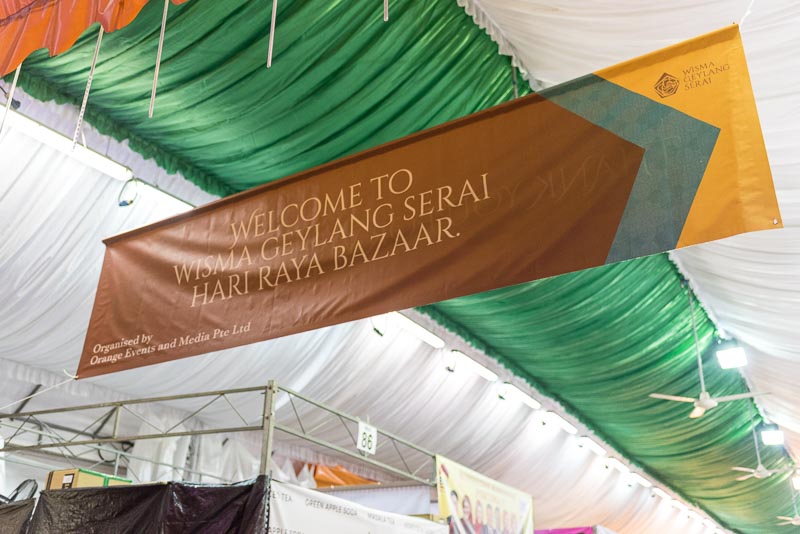 While many are excited to try all the new and less conventional food offerings (that just seem to cater increasingly to millennials), others are miffed that the bazaar is losing its traditional charm. Gone are the days when a Ramly burger and some lekor (fish keropok) were enough.

Well, if you can’t beat ’em, join ’em! We went to visit to see if any of the new entries this year were worth a try, Insta-worthiness and all. Here are 10 unconventional Geylang Serai Bazaar eats that you’ll want to save space for after you get your annual Ramly:

— Great Grub That’s Value-For-Money Or Worth The Splurge — 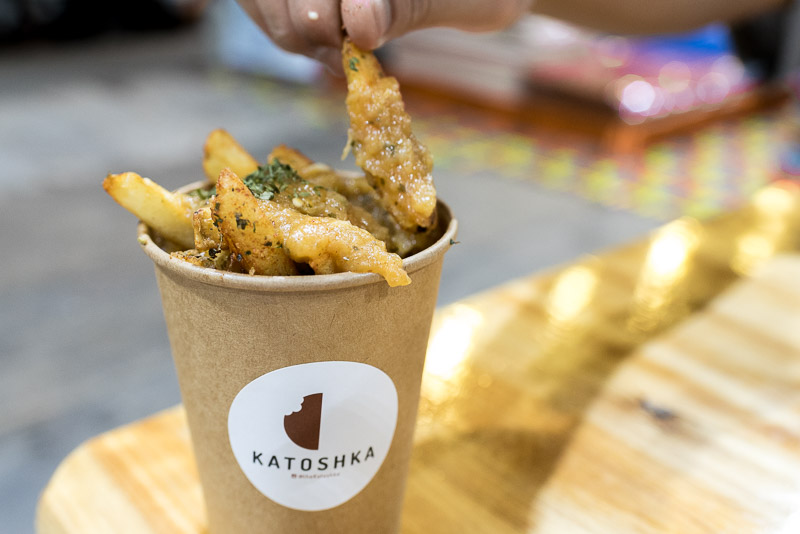 Katoshka’s fries are a perennial favourite at bazaars and it seems like there’s a new addition to their repertoire of sauces!

The Spicy Creamy Tom Yum Russet Fries ($6.90) were delectable and the fries were generously coated with the sauce. The dish had the perfect amount of Thai Tom Yum flavour and was tangy, with just a gentle kick of spice.

Besides their classic Russet Fries, you can now opt for Sweet Potato Fries ($5.90) too. 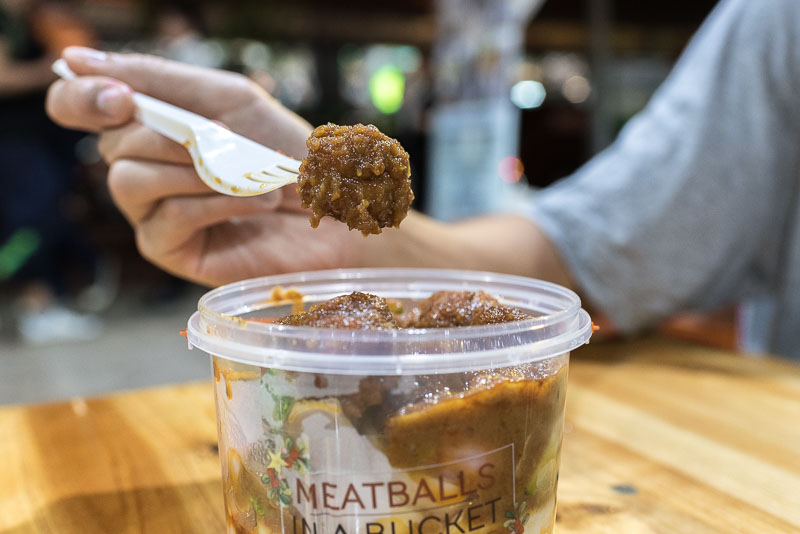 Curious to find out how satay in meatball form would taste like, we got ourselves the Chicken Satay Meatballs In A Bucket ($9) from Sofnade.

It turns out that it’s slightly tougher and chewier than regular meatballs, but it was complemented nicely by the generous serving of spicy satay peanut sauce. With carbs from the ketupat and greens from the onions and cucumbers hidden beneath the meatballs, this bucket is essentially a full meal! The best time to drop by CHICK-A-BOOM! is between 7pm – 8pm as everything will be sold at just $5 during this hour, making it one of the most value-for-money items at the bazaar!

The grilled chicken chop is served in chunks slathered with a generous serving of sauce, with four options to choose from – Aligot ($7.50), Chilli Crab ($7), Garlic Butter ($7) and Sambal Works ($7).

We opted for the Aligot, which is a blend of mozzarella cheese and mashed potato. However, it was quite rich and got jelak after awhile. The dish is still worth a try because of its price point, but perhaps go with one of the other sauces instead. 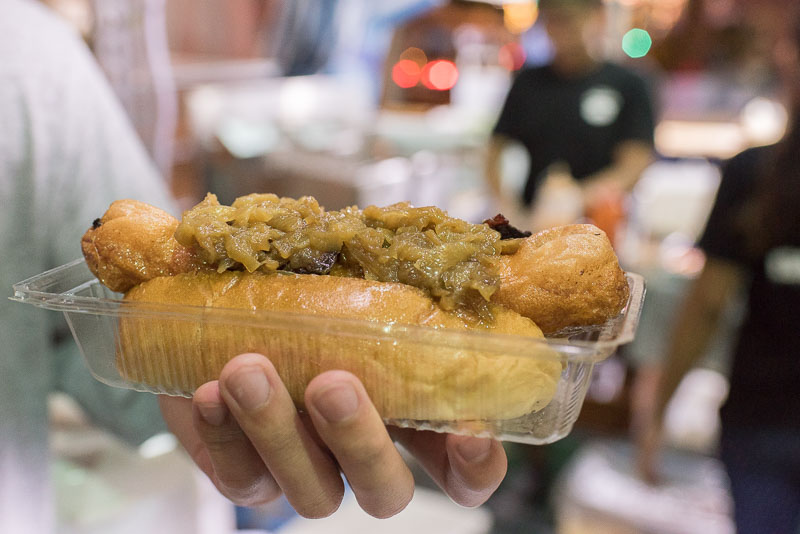 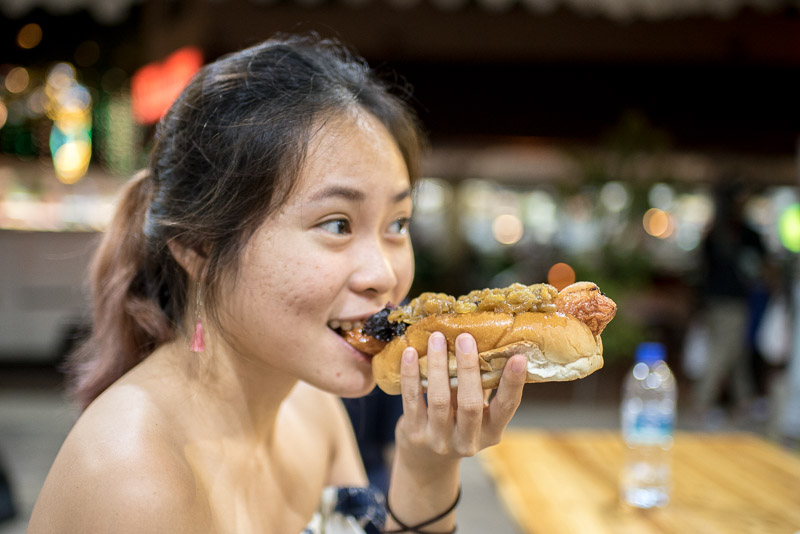 There’s nothing like a good ol’ hot dog bun to satisfy the peckish souls wandering the bazaar and the ones from Suap are upsized and served with a variety of different toppings.

We chose the Bacon Wrap Caramelised Onion ($7) and found it to be really filling! The sweetness of the caramelised onions contrasted nicely with the saltiness of the hot dog and I liked how the (halal) bacon added an extra crunch. 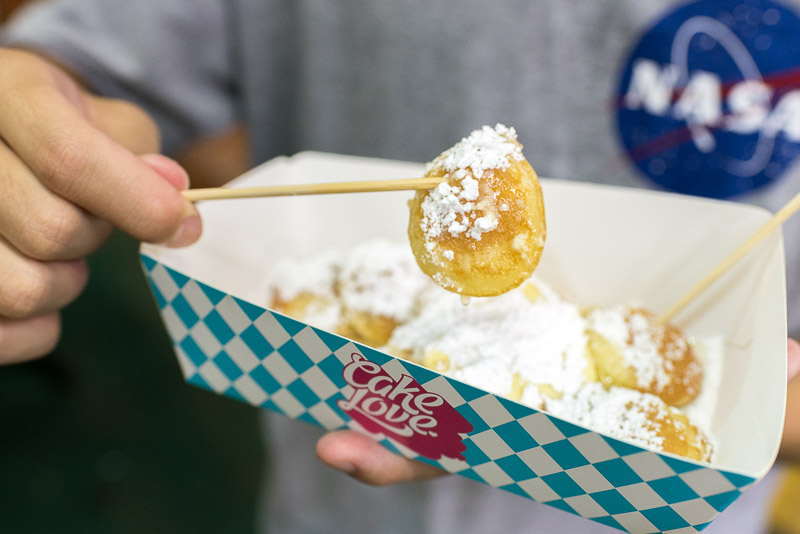 These Poffertjes (Dutch baby pancakes) from Cake Love were a satisfying no-frills dessert. If you go for the traditional flavour ($5), warm Poffertjes are topped off with butter, a sprinkle of icing sugar and a drizzle of maple syrup.

The last time I had Poffertjes was in Amsterdam and I’m happy to report that these taste almost the same! If you’re still wondering whether they were tasty, let’s just say my colleagues and I finished all 10 in minutes. 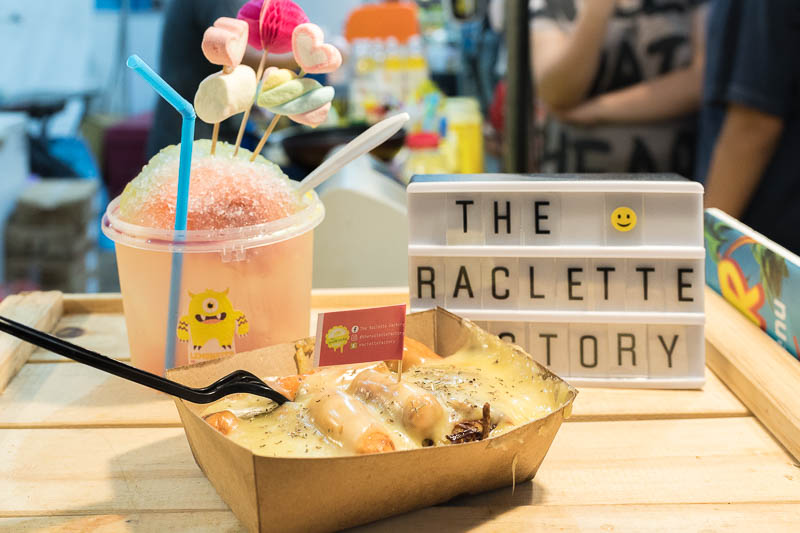 The Raclette Combo Set ($19) from The Raclette Factory comes with a box of Swiss Rosti Raclette and a Lemonster Drink. Categorising this stumped me because the set is both photogenic and worth the splurge.

The Lemonster Drink ($8) was the perfect weapon to combat the infernal heat of the bazaar. Available in four different flavours, we had the Peach Perfect, a sparkling peach-flavoured drink topped off with shaved ice that’s drizzled with flavoured syrups such as lemon, green apple and strawberry. 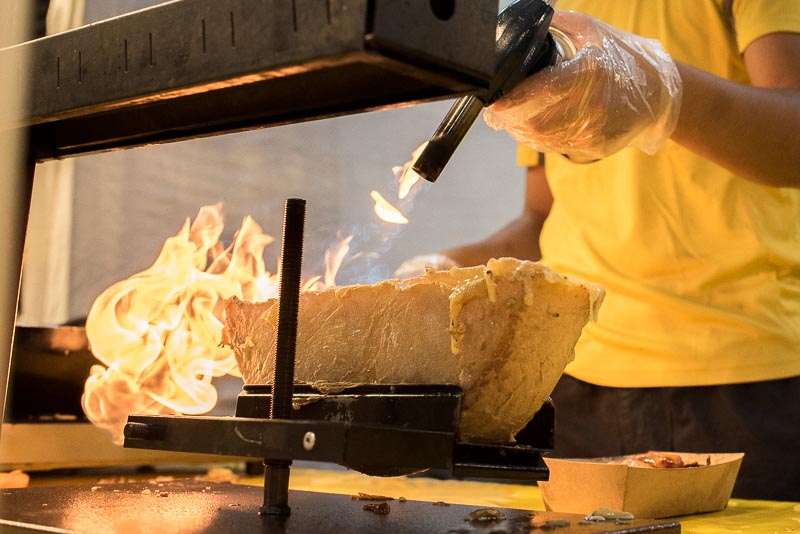 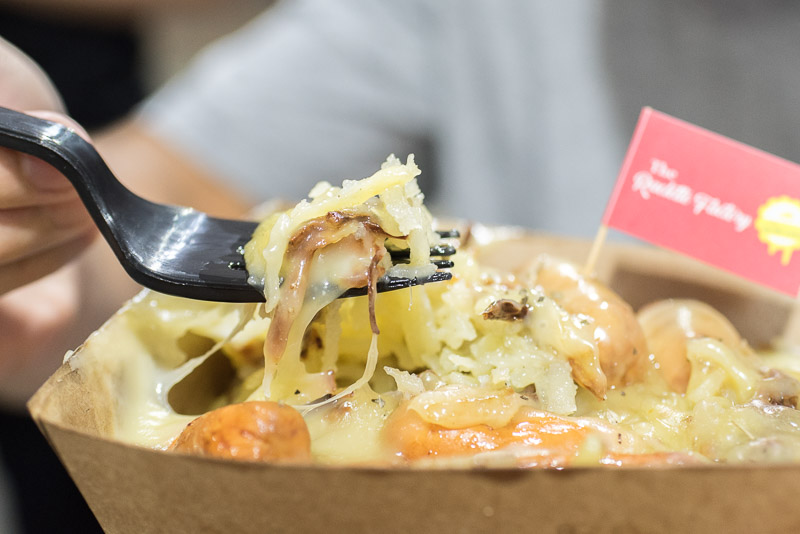 Meanwhile, the Swiss Rosti Raclette ($12) came with piping hot rosti and chicken sausages blanketed in a generous layer of Raclette cheese. While the rosti had a slightly charred taste and could have been slightly crispier, we loved how well it paired with the Raclette cheese. It was rich but not cloying at all!

— Items Worth A Try For The Theatrics, The ‘Gram, Or Just For Fun — 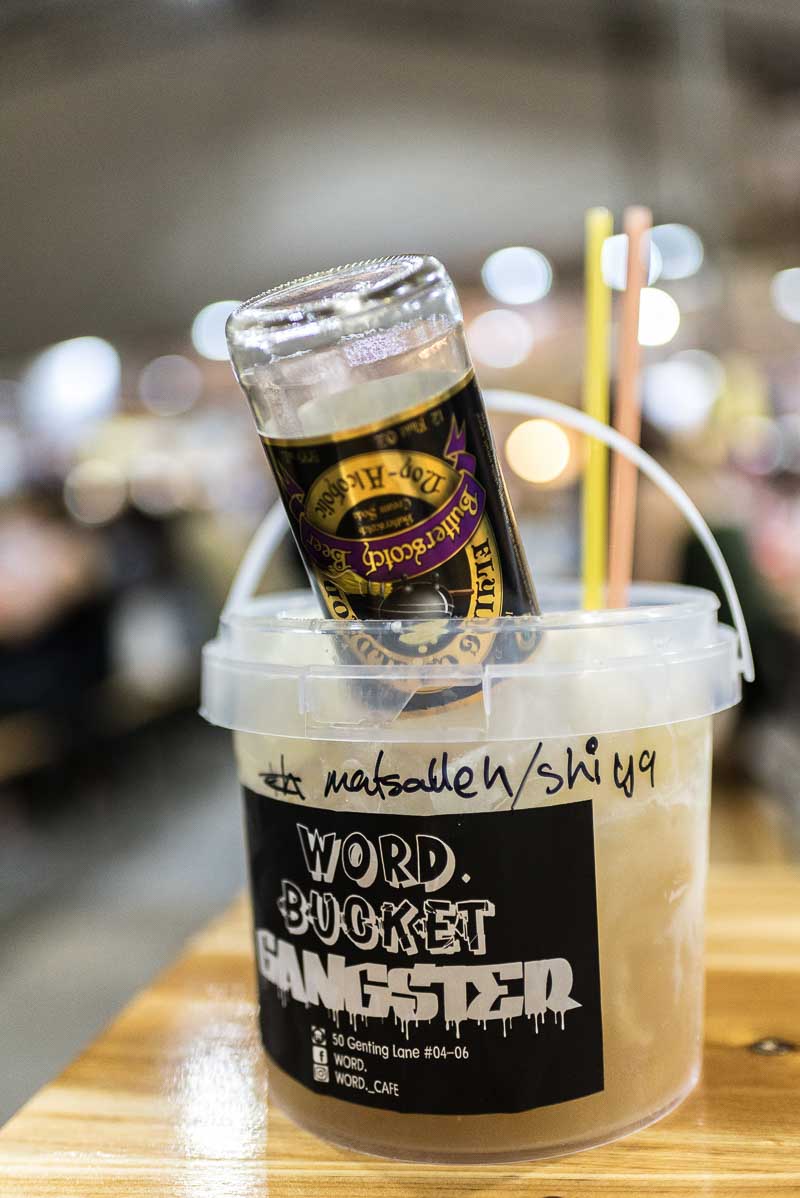 Another option for cooling down is the Bucket Gangster drinks from WORD, which is enough to share between three people.

The Mat Salleh Butterscotch Float ($8) is perfect for Potterheads (clearly I’m one too) because it looks like Butterbeer is being dunked into the drink! This is one of the best renditions of Butterbeer I’ve tried so far, albeit non-alcoholic, and was a unanimous hit with my colleagues.

While this is clearly something worth snapping a picture of, it’s also a pretty worthwhile purchase! 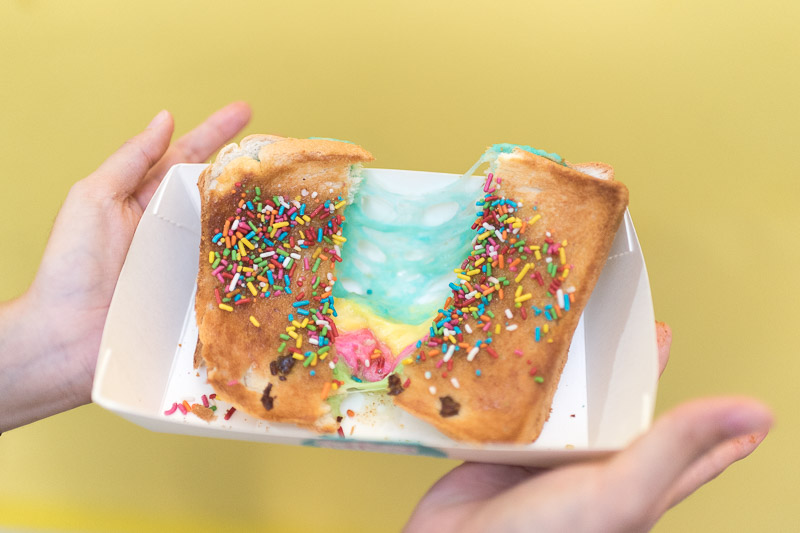 It’s not a stretch to say that this Rainbow Grill Cheese Toastie ($5) from Take A Bite has yielded one of my most successful cheese pulls to date. Different colours are mixed into the halal mozzarella, resulting in stretchy cheese pulls with every bite.

Taste-wise, it was a nice grilled toastie but nothing overly impressive. I did like how the sprinkles added colour and also a tad of sweetness and crunchiness to the texture! 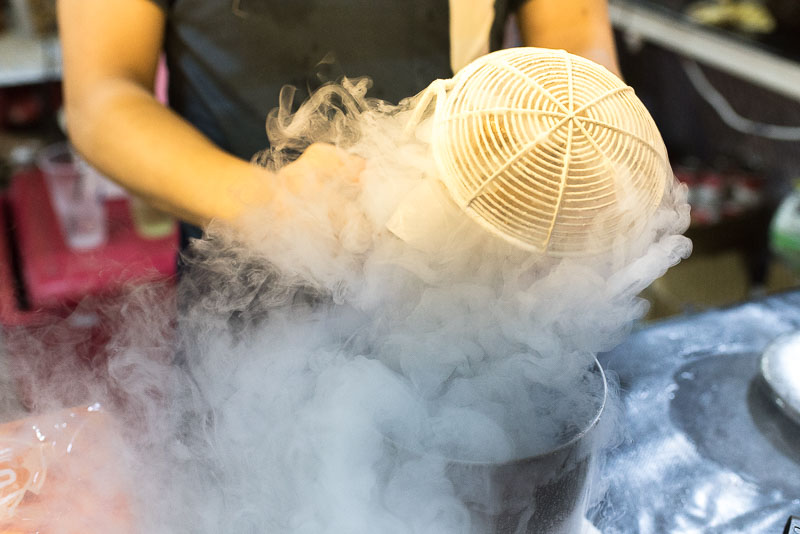 If you’re looking for something that’s fun and for the aesthetics then the Dragon Breath ($5) from MrQ Snacks fits the bill. You can choose between Chocolate or Strawberry ($5) flavoured crackers or get a Mix ($8) of both.

We had the Chocolate Dragon Breath but found the crackers to be solely disappointing. Frankly, it didn’t taste like much. I guess the most impressive part was watching the crackers being doused in liquid nitrogen.

Nonetheless, we did have fun experimenting with trying to breathe out smoke! 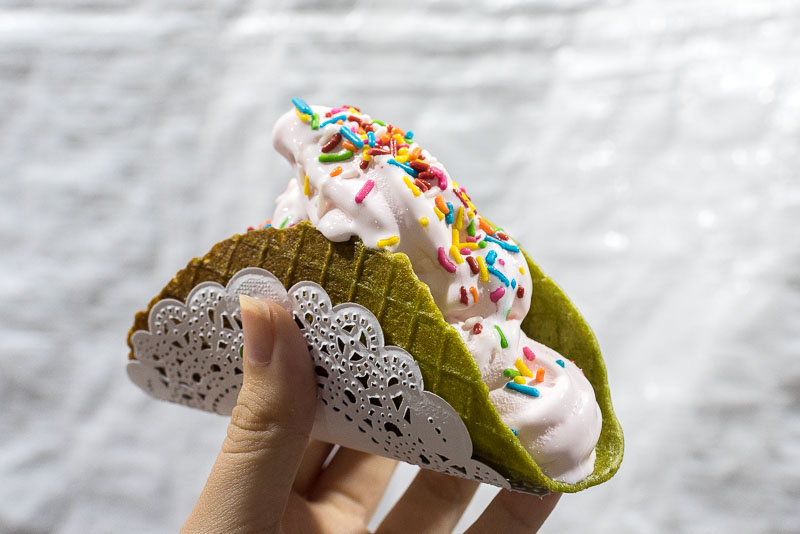 Serving ice cream in a taco shell is something that sounds strange, looks good, but tastes not-so-good, as proven by the Watermelon Taco ($5) from Happy Rollies.

Served in a green taco shell that mimics the rind of the watermelon, the soft serve tasted just like the watermelon-flavoured bubble gum we had as kids. Sadly, it melted quickly and became a sticky mess in minutes.

The taco shell which was supposed to be green tea-flavoured didn’t taste like green tea and was a little stale and hard (lao hong) and we ended up throwing it away. The ice cream is worth a try though, just because it’s usually quite hard to find watermelon-flavoured soft serve. 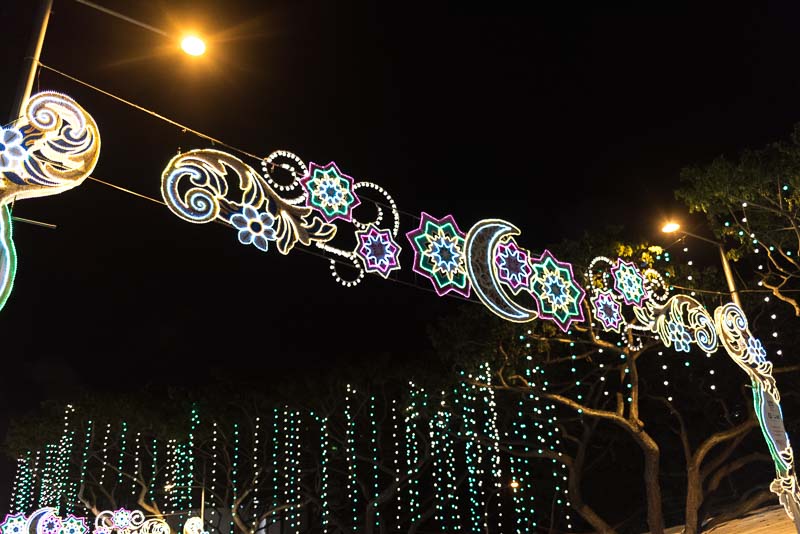 There seem to be recurring themes with every year’s Geylang Serai Bazaar and this 2018 edition appears to focus on buckets, chilli crab and cheese. Hopefully, this guide has helped you decide on what to save stomach space for!

Do note that some stalls may be closed temporarily around 7pm as the owners break their fast. One last tip – as always, try to dress light and breezy because it’s stifling hot at the bazaar.

To our Muslim friends, happy fasting and Eid Mubarak in advance!

Previous article10 Dishes In Malaysia Boleh! To Have At Jurong Point Without Crossing The Causeway
Next articleWAN Bar + Kitchen & Nightclub: Party With Alcoholic Bubble Tea & Mantou Sliders In Suntec City 10 Stalls To Seek Out At Redhill Food Centre For Comforting...