VLV is the latest gem at Clarke Quay – it is set to restore the gleam and glamour to Clarke Quay with its classy set up, backed up by a strong predilection for modern Cantonese cuisine. 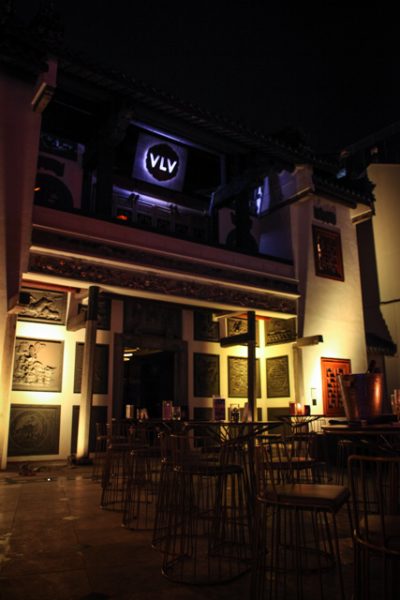 VLV is housed in the historic Teochew conservation building, in which IndoChine had previously occupied. Externally, VLV is encrusted heavily in traditional Chinese architecture wrapped with statues of mythical dragon, phoenix and lion. Step into the world of VLV and you will be engulfed in luxurious western decor with echoing lounge electronica interspersed with live, evergreen Mando & Canto pop songs. You are somehow teleported into a Hong Kong movie set.

I had only one mission when I was invited to VLV – to suss out their gastronomica. I walked in, trying hard not to appear to be mesmerised by the beautifully contrasting decor – because I must admit that I had great expectations of this place.

I know that Miss Dolores Au, VLV’s CEO, has a very distinguished reputation that preceded her at Ku De Ta and Catalunya – she really has a Midas Touch. Furthermore, VLV’s kitchen is headed by a very affable Chef Martin Foo. He has had 25 years of culinary experience and an illustrious leading career as Senior Executive Chef at the venerable Tong Le Private Dining.

His brainchild, the VLV Peking Duck (Half: $55; Whole: $110) attempts to reinvent the Chinese gourmet classic with modern cooking techniques and integration with western ingredients. Premium 45-day-old ducklings are meticulously selected for its meat texture and a thinner layer of fat. Chef Foo wants you to try both the classic and his reinvented versions – you will get a set of condiments of which you will see the traditional sauces of the house-made Goma Hoisin Sauce and Truffle Foie Gras Sauce, along with avocado, crispy bean curd skin and caviar. Carefully, I prepared the traditional crispy Peking duck skin in both versions of these sauces. The Goma Hoisin Sauce shone through like a thousand year old emerald – its demurely sweet scent floated along with the Umami-rich taste of the Goma (a sesame-based sauce). It is what you have very much expected of the Pekingese classic, and more. Contrast the former with the more contemporary interpretation, Truffle Foie Gras Sauce. The savoury foie gras has notes of Amaretto and its texture is silky smooth.

A swath of this sauce over the crispy Peking Duck skin gives you a different version of the Peking Duck wrap that we are so used to. It may not please everyone’s palate, including mine, as the Truffle Foie Gras sauce did not sufficiently elevate the Peking Duck.

The VLV Peking Duck meat can be re-made in 2 ways – Yangnyeom Duck with Housemade Kimchi or Spicy Duck Cones. In many other restaurants, the fate of the duck would have been left to your mercy. Chef Foo feels that he knows best of the fate of his Pekingese Duck – and he has gotten them spot on. The Yangnyeom Duck is essentially VLV’s stylised Korean Kimchi fried rice with Peking Duck meat marinated with a special blend of spices. This one stands out much more in terms of taste – the spiced up meat tasted fragrant along with the crunchy, spicy Kimchi. The alternative way to making good use of the Peking Duck meat is dedicating them into making the Spicy Duck Cone. This one is presented in much fanfare, dry ice and all, to give the audience a magical experience. The duck meat has a good, delicious balance of spicy-sweetness, only to be slightly let down by the greasy cone. Another one of VLV’s signature dish is the Clay Coquelet (古法黄泥烩鸡), more popularly known as Beggar’s Chicken ($58, limited quantities). It is laboriously made by baking marinated chicken with VLV’s housemade sauce in a lotus leaf in clay for nearly 4 hours – the result is a succulent and full-bodied traditional Chinese dish. The Clay Coquelet is meant to be eaten with rice – Chef Foo has chosen the Nepalese Rock Rice as an accompaniment to the Beggar Chicken. Having no taste at all, the rice is meant to provide a textural base to the chicken dish. Something quite novel, to be honest. The Sizzling Romaine Lettuce ($24) is a simple Cantonese dish and yet carries a fragrant scent of dried shrimp and prawn paste, with a sizeable hint of chili heat to it. I feel that it would go well along with the Beggar’s Chicken. For those who prefer seafood over vegetables, it would be a good choice to have the Gong Pao Tiger Prawns ($36) on the table. The shell is the prawn is soft enough to be eaten without being peeled off – in fact, this is the way that it should be consumed, as the fragrance of sauce will be on its surface. 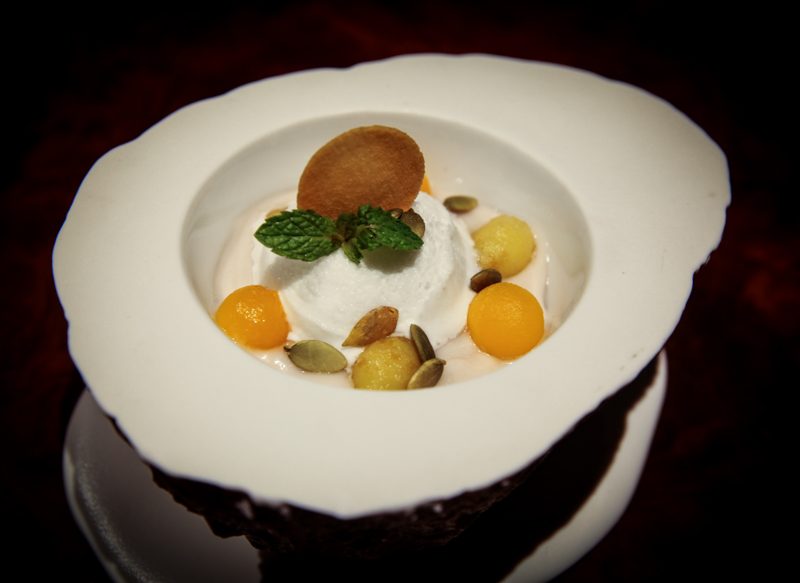 Desserts are often a very personal choice. If you do order any, you must order the VLV Or Nee ($12). This Or Nee is a modern dessert interpretation – it is actually a cold dessert, instead of the traditional “hot” one; and topped off with a housemade coconut ice-cream.

The concept of dining at VLV is rather dogmatic (in a good way) – please allow me to explain. The patrons are not encouraged to bring their own alcohol – the entire menu has been designed to pair with the list of VLV’s range of alcohol, from beer and champagne to whisky and wine. Alcohol pairing with Chinese food is difficult – let VLV do that for you. Chef Foo has spent his whole career making these decisions, so I would trust him wholeheartedly.

The booze list is comprehensively exhaustive. I would name a few to whet your appetite – for Chardonnay, Pinot Noir, Pinot Meunier: Charles Heidsieck (Reims, France) at $168/bottle; for Sauvignon Blanc: Te Whare Ra (Marlborough, New Zealand) at $105/bottle; and for beer: Suntory Premium Lager at $16/glass. Most of these items are not available elsewhere but at VLV – and yet, their prices remain very reasonable considering the quality of the names. VLV’s cocktails, however, are not paired with the food for the obvious reason that most diners consume these before food, or even without food. From party revellers to small groups on a night out, these cocktails are most appropriately enjoyed al fresco or at VLV’s classy lounge.

One little niggling point, though – VLV frontline staff, particularly the reception, need to be at their most attentive and be accommodating to everyone at all times. No one likes to be attended to by a grouchy guy who has a propensity to saying no to your requests. From the outset, VLV is a classy place that is full of verve. Coupled with great Chinese food, it is definitely an ideal location for entertaining high-end guests and corporate dinner functions. I would also recommend VLV to tourists who want authentic Chinese cuisine and do not mind splurging.

I feel that VLV needs to bring in the local or expat crowds from the middle part of the bell curve, too, for long-term survival – thankfully, their food and alcohol lists appear to be reasonable enough to attract these group, particularly over the festive seasons.