Wah Lok CNY 2016: Indulge in an elegant affair with classic dishes with a twist 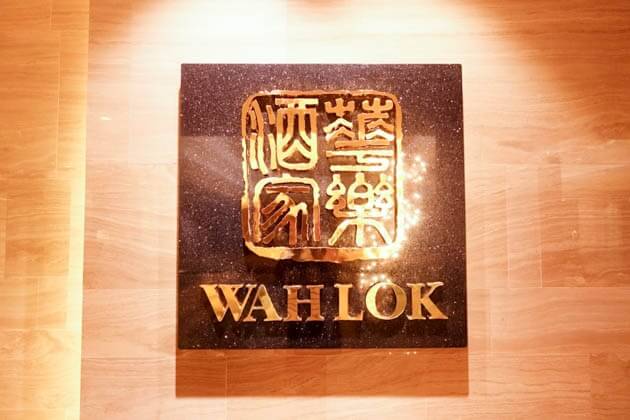 Welcome a year of prosperity and success by treating yourself and your loved ones with an auspicious treat at the award-winning Wah Lok Cantonese Restaurant situated within the premise of Carlton Hotel Singapore. 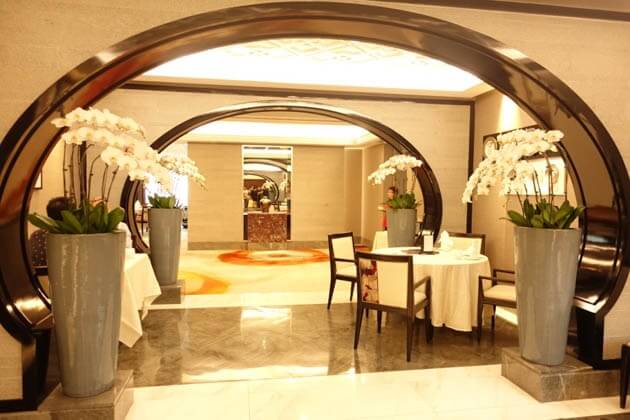 One can also grab some delectable take-home goodies to share with family members and colleagues. The traditional and premium Lunar New Year Treasures food spread is available at Wah Lok from 25 January to 22 February 2016.

Apart from celebrations over a reunion meal, one can renew and strengthen bonds with their family members with an intimate Reunion Stay at Carlton Hotel. What a wonderful commemoration of the festive season with the glistening light displays of festive lightings and street performances at Chinatown, which is just a stone’s throw away. 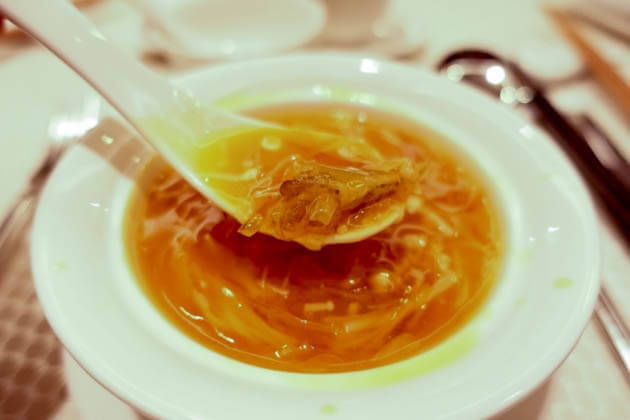 The shark’s fin soup at Wah Lok Cantonese Restaurant has a special taste and flavour to it. I felt that the broth had a silky texture. Despite being thick, it was it was smooth and very easy to swallow.

The highlight specialty of this dish lies in the broth, in that it is made from carrot. Chef Ng Wai Tong, also referred to as huang shifu, had chosen upon the use of carrot for the broth base, reasons being the carrot is a common vegetable which most people will eat as well as it being a healthier choice.

Although the dish is flavourful, I had felt that the ingredients had had a slightly coarse texture to it. The yu sheng platter here at Wah Lok is made up of classic vegetable ingredients such as radish, lettuce, crackers as well as other common vegetables. The delectable treats lie in the meats used for it.

The Hamachi yellowtail fish slices were thick, succulent and savoury.

I would say that contrast to the usual salmon slices which we usually put into our yu sheng, the hamachi has a more buttery and less fishy flavour than salmon. 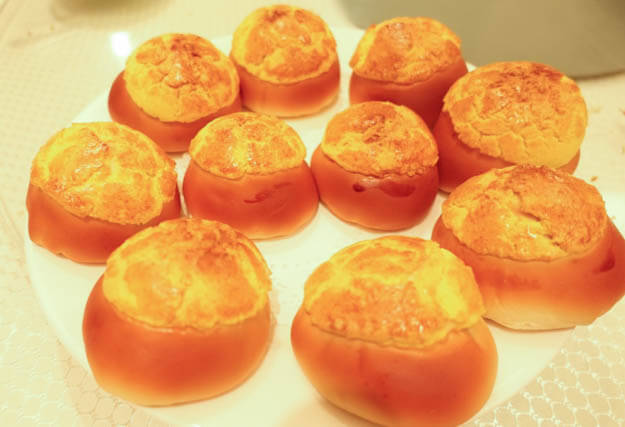 One of Wah Lok’s signature dim sum, these baked buns are appetising indeed. If you are a lover of baked char siew and bo luo bao (pineapple buns) like me, this dish is a must-try.

The marinated pork bits were chewy and not too soft. The savoury point lies in the right amount of sauce that holds the pork bits well, with it oozing delightfully with a warm, juicy sensation upon every chew.

The crispy, yet not too crumbly baked pineapple crust on the top of each bun adds on to the enchantment brought by the dish. Overall, it was an awesome blend of a variety of textures — oozy, rebounding and crispy at the same time.

This dim sum dish is not limited to the Lunar New Year menu, and is available during Lunch daily at Wah Lok Cantonese Restaurant. 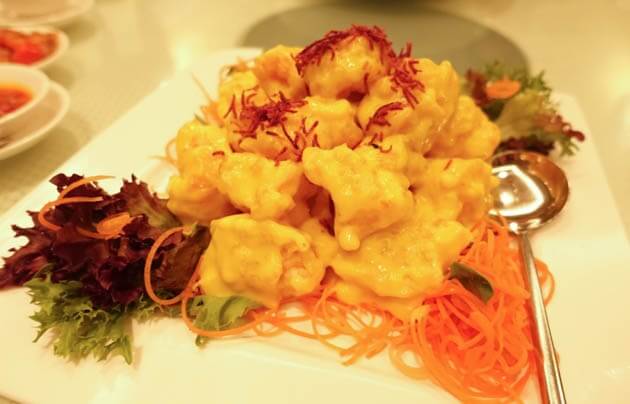 This is another of my favourite dish here at Wah Lok. The prawns used are tiger prawns, which were very thick and succulent upon chew. Topping it with an impressive texture, the mango-flavoured covering added a pleasant tropical fruit flavour. This poon chai, also known as big bowl feast at Wah Lok is has a delightful way of tucking into the superior stock ingredients contained in the casserole pot.

This deep pot dish is made up of three elaborated layers, and diners will be served with the three distinct layers as the course of a ‘three-step eat’ in gourmandising this pot of treasures.

The first layer of the Longevity Poon Choi consists of what I would say, the most ‘intricate’ and valuable food items. The ingredients for this layer include baby abalone, scallop, sea cucumber, dried oyster and pan-fried live prawns.

This layer of the poon choi is likened to the dish served at most Chinese restaurants. The knowledge of having even more layers to indulge in upon digging deeper into the Wah Lok’s Longevity Poon Choi does awaken the diner to anticipate for even more convoluted goodies lined up. 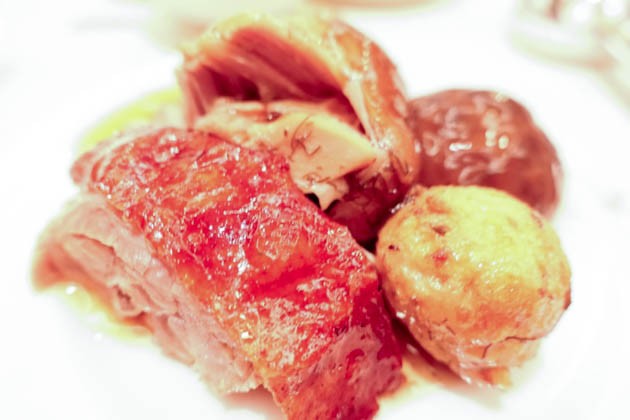 The second layer of the Longevity Poon Choi consists of roasted duck, pork shank, fishball, mushroom and black moss. I felt that it was a good blend of flavours combining the fried, roasted and braised gourmet food items. 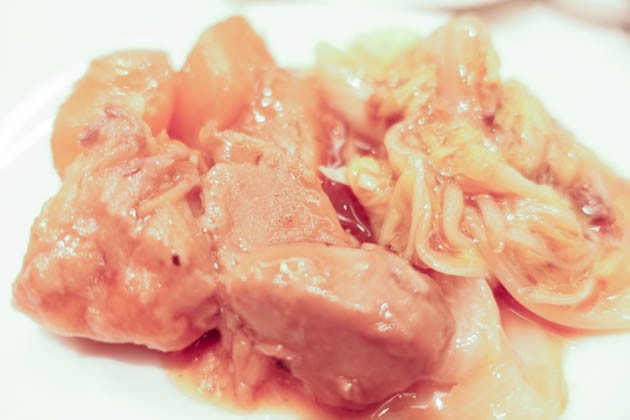 Alas, the third layer of the poon choi is made up of what I should say, the healthiest ingredients of the casserole. These include yam, radish and Tianjin Cabbage. Each of the these tuberous roots and vegetable exude their special texture and taste which gave an overall warm and savoury round-up to the partaking of Wah Lok’s Longevity Poon Choi. 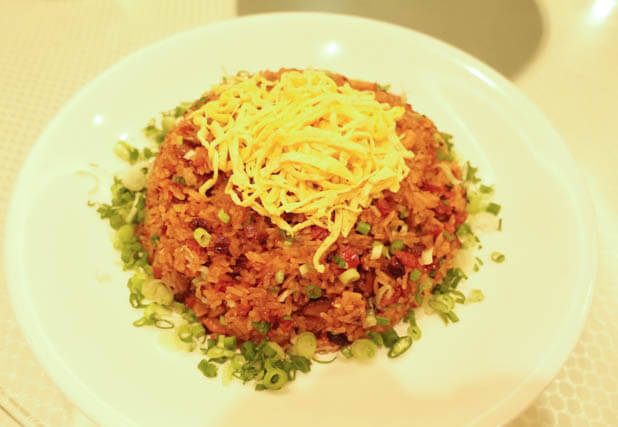 Contrast to glutinous rice commonly found at other places, the one here at Wah Lok is made from rice that is fried, instead of steaming it. This results in a more charred texture, in that the glutinous rice is not moist nor sticky. I specially love the dish being conjured this way.

Topping the glutinous rice splendidly, the diced meat and Chinese sausages were both very fragrant. They ignite rebounding chews with every munch of the dish. 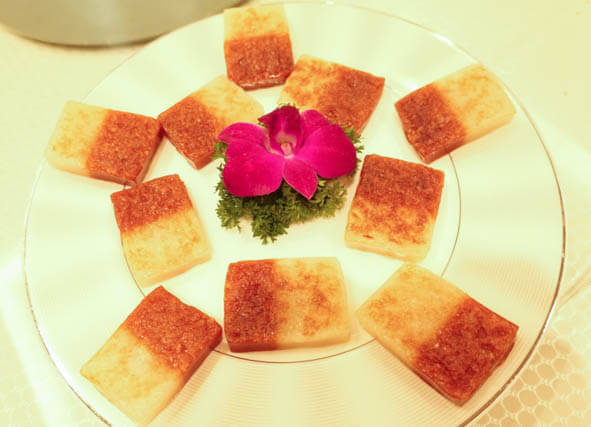 A traditional Lunar New Year pastry which signifies promotions and prosperity, the pan-fried nian gao here at Wah Lok has an innovative presentation of the flavour and taste of this savoury treat.

This delicacy is made up of a joint of two contrasting tastes, with the brown part being the taste of normal nian gao and the white part carrying an almond flavour. This joint of flavours is likened to a ‘yuan yang’ combination of tastes.

I personally love this novel presentation and eating of this Lunar New Year pastry. The contrast of the wild bitter almond flavour with the sweet taste of traditional nian gao is indeed an inventive blend of taste that gives a good round-up to my Lunar New Year meal here.

Wah Lok’s Chinese New Year Lunch menu is one that is classic, yet contemporary, one that will please your elders without being too radical. I like this restaurant for its ability to cater to the tastes of both the young and the old.

I highly recommend Wah Lok’s Chinese New Year menu for extended families to celebrate this 2016 Lunar New Year with a genuine, traditional Cantonese taste that is embodied in a modern, avant-garde style of display.