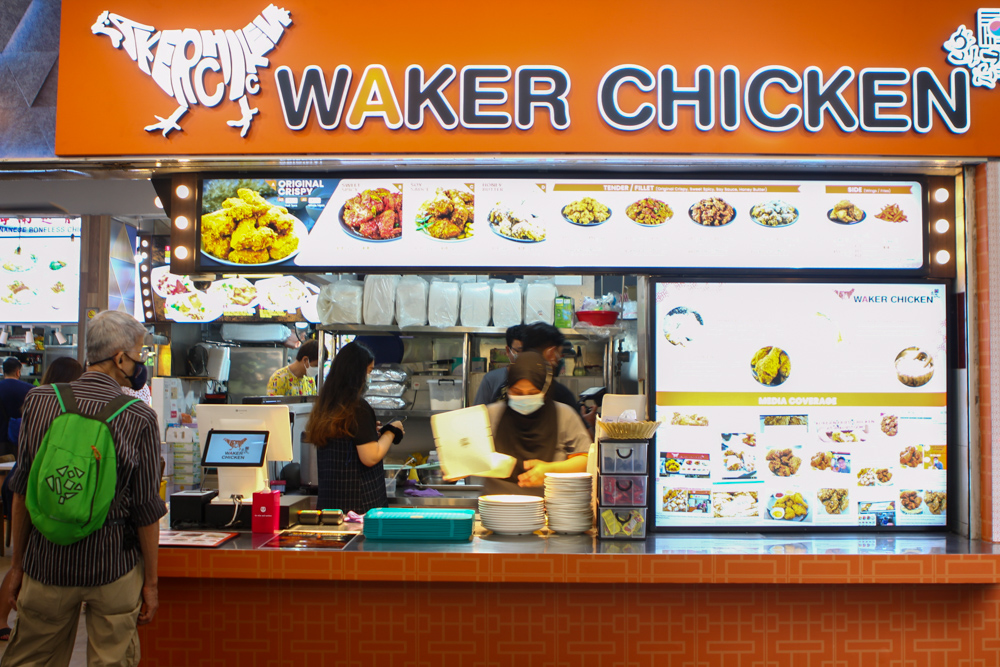 They currently have four outlets: in the East (New Upper Changi Road), West (Bukit Batok), North (Marsiling), and the latest addition in the North-East of Singapore, at Compassvale. I made my way down to their Marsiling outlet which officially opened last month.

A little backstory before I begin, Waker Chicken was brought into Singapore by two Koreans living in Singapore, Noh Tae Woo and Kim Jinho. Kim’s uncle owned the brand in Korea and when Kim shared that both Noh and himself missed the taste and experience of authentic Korean fried chicken, his uncle gave him his blessing to open up Waker Chicken in Singapore. Together with the help of their other partner, Dan, a native Singaporean Muslim, the three of them have been working towards inclusivity and very soon, hope to be halal-certified. For those who prefer their chicken boneless, they also have Chicken Tenders, Chicken Fillets with rice, along with sides like Wings and Sweet Potato Fries. Of course, I had to begin my fried chicken taste test with the must-try Original Crispy flavour. Waker Chicken is known for its variety of flavours that pack a punch while still maintaining irresistible crispiness. “Irresistible crispiness,” I thought to myself, “bold claim”. Remaining the sceptic that I am, I picked up a piece of breast meat and sunk my teeth in. As we all know, breast meat is the easiest cut to dry out. However, the one over here is moist, flavourful, and incredibly crispy. It easily became one of the best fried chickens I’ve tasted in a while. Next up is the Honey Butter. What looks like Tony Montana’s stash of blow on the chicken is actually a powder made of honey and butter that smells eerily similar to baby milk formula. As much as I tried to probe further, Tae Woo was very vague with his answers, insisting that I eat it and guess what it is. Like the Original Crispy, the Honey Butter was absolutely crispy but had a distinct sweetness and subtle tanginess to it. Tae Woo also shared that this flavour was a hit amongst Singaporeans.

Personally, I didn’t see much appeal to it, probably because I’m not a fan of sweet fried chicken. However, it was evident that the crowd was specifically getting this flavour. Another much-loved flavour is the Soy Sauce— essentially an amalgamation of sweet and salty, bursting with rich umami. At this point, I was wondering if there was something wrong with my taste buds because, like the Honey Butter, I didn’t see much appeal to this flavour too. Self-doubts aside, I was gradually falling in love with the ASMR crunch that followed each bite of chicken. Saving the best for last is the Sweet Spicy which is Tae Woo’s favourite too. You can’t go wrong with the co-founder’s favourite flavour, right? The Sweet Spicy is basically doused with a traditional Korean-chilli based yangnyeom sauce. The moist and juicy chicken is coupled with a very crispy outer layer, and gives off a subtle kick from the chillies– which took me by surprise. This flavour immediately sent me to food heaven and I didn’t want my chicken-eating experience to end here. Alas, after three pieces of Sweet Spicy, my tummy pleaded to call it quits. What’s extremely commendable about Waker Chicken is that all their chicken, doused in sauce or not, came extremely crispy on the outside and perfectly cooked on the inside. Just the way fried chicken should be.

“Only the freshest chicken is used here,” shared Tae Woo, “and every bird is seasoned and brined overnight to achieve the most succulent, juiciest, tender, and flavour-packed fried chicken.”

I also found out that ‘waker’ means ‘big’ in Korean, which is kind of apt considering how the chickens used here weigh around 1.3kg to 1.4kg as opposed to the usual 700g to 900g used in Korea.

So, if you love your K-Beauty, K-Drama, and K-Pop, it’s time for you to head down to Waker Chicken and embrace K-Chicken. Besides, they are highly affordable too!