Upon hearing of Poland, Vodka would be the first thing that comes to mind, but there is so much more too – Polish cuisine is diverse yet basic in nature.

I’ve had the pleasure of visiting Warsaw, Poland thanks to the Embassy of the Republic of Poland in Singapore, and have tasted first-hand what Polish food is.

The food reflects what the Polish people are about, with traditional recipes passed down through generations. Sharing many similarities with other Slavic countries, its cuisine is eclectic with Central European influences including Hungarian, French, German and Austrian. 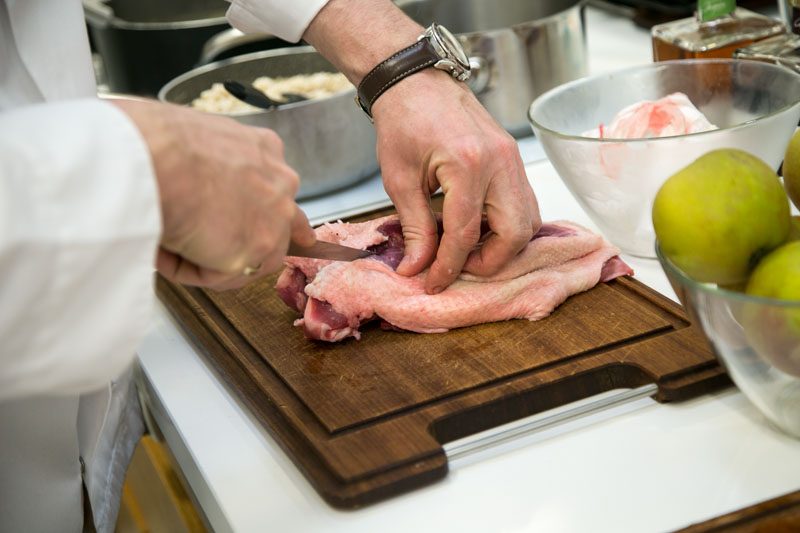 Proudly using local produce from the rich lands of Poland, dishes incorporate the best of what is grown such as apples, herbs and mushrooms appearing in many recipes. The range of dishes you can find in Poland are quite meat-centric, and generally are hearty with heavy use of cream and eggs.

Classic dishes like the Pierogi dumplings have different twists and take hours of effort to prepare to ensure the very best flavour. Dining in Poland is always a huge feast, a signature of Polish hospitality. Rustic, yet constantly evolving, Polish food’s labourous cooking methods will ensure a pleasant surprise for all who have the chance to experience it. In this article, I introduce some of the commonly found foods in Poland that I’ve personally tried, and hope you’ll have the chance to experience them too. 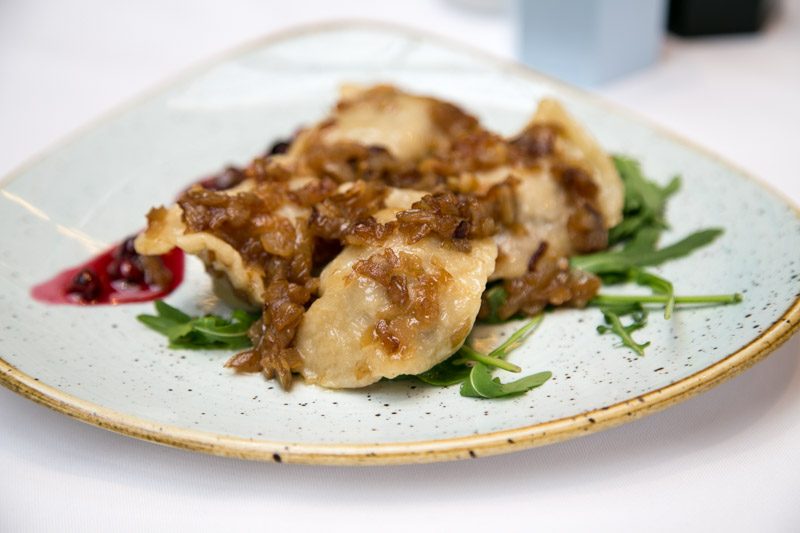 Polish dumplings, known as Pierogi, are a staple fondly beloved by many locals.

One of the most popular styles is the Ruskie pierogi, filled with curd cheese and potato and topped with fried onions. A great place to enjoy pierogi along with a spectacular open industrial setting is at Warszawa Wschodnia. Due to the time-consuming nature of rolling the flour dough and preparing the stuffings, many homes prepare pierogi in large batches and chilled for consumption down the week.

Widely considered a national dish, don’t miss out on the widely-loved Pierogi if you’re ever in Poland. 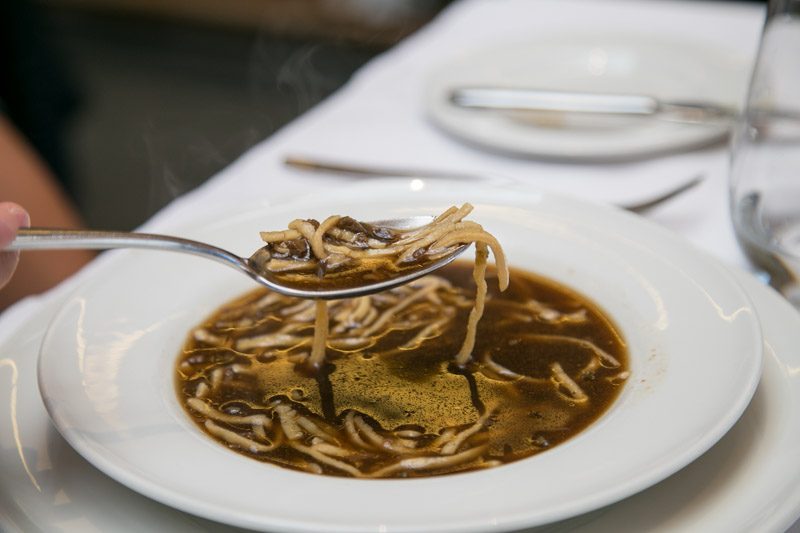 Soups in Poland are associated with a good comfort meal, and can come in hot or cold varieties depending on the season. I mostly had the hot variety since it was Spring during my visit, while the cold soups would appear in Summer – soups are popular all-year round though.

I’ve tried numerous soups, one of which is the Zupa grzybowa, or Polish mushroom soup, which is cooked in meat and vegetable stock for a deep, rich flavour. Another interesting soup I’ve had the pleasure of slurpping is the tripe soup (Flaki), made with the stomach of a cow or pig. It’s complex taste is vividly in contrast to the usual Pig’s stomach soup we have in Asian, which uses a lot of white pepper to bring out the flavour. 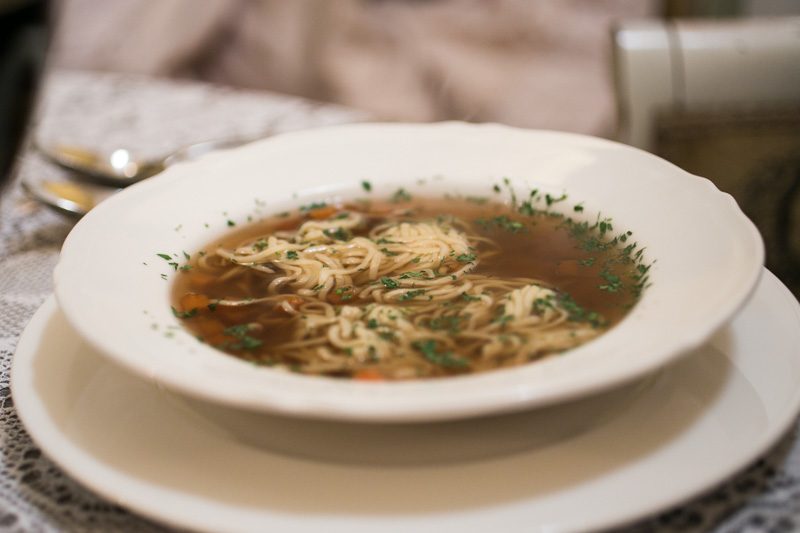 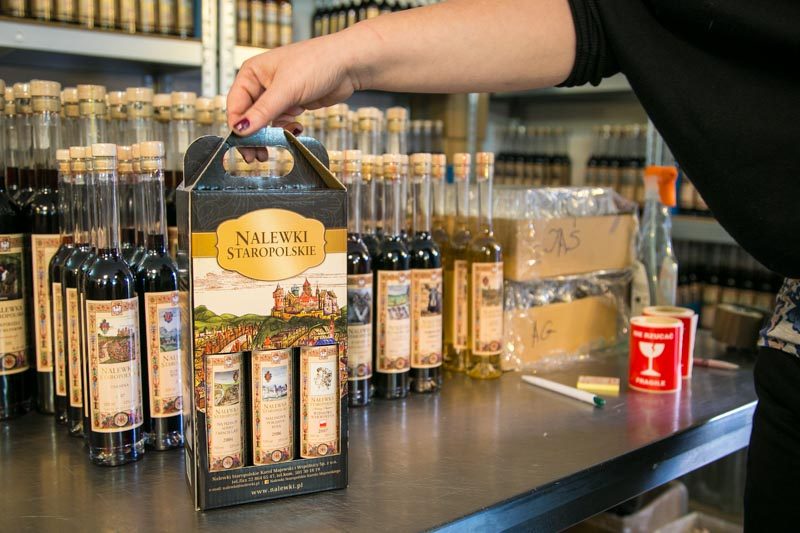 Nalewka is an old-style Polish Liquer that is made through the masceration of various herbs and spices in alcohol, similar to medicinal tinctures. Nalewki Staropolskie is one such artisanal brand that has a home-brew setup right in the backyard of its owner Karol Majewski. Fruits, herbs and spices are gathered from the nearby forest and ripened under the natural sunlight along with alcohol in large vats. So manual is the process that they have to shift the vats accordingly to where the sun is shining over the seasons! The liquer is than aged for a minimum of three years before being ready for consumption. 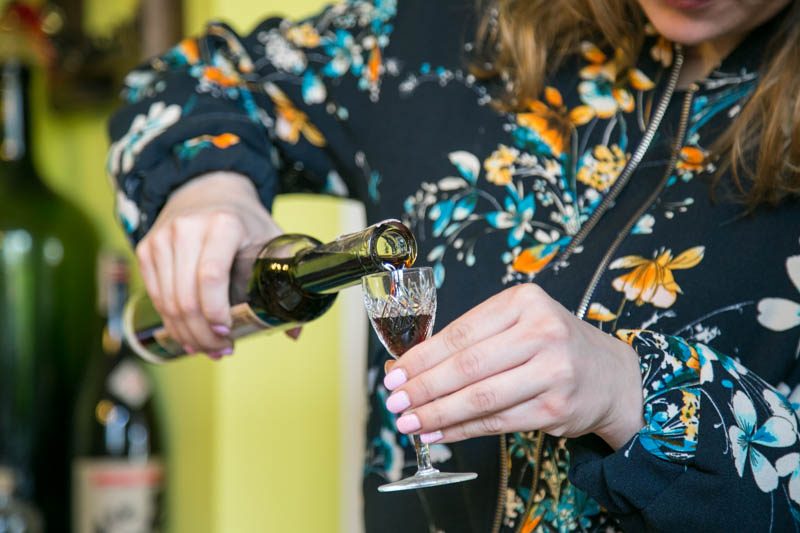 The result is an intense and rich Nalewka made in small batches that are a notch above industrially produced ones. The ‘Four Seasons’ Nalewka made with milk and lemon made an exceptional impression for me, so much so that I bought one back to Singapore.

This family-run business supplies to the most exquisite restaurants in Poland including many government bodies as well as Chef Amaro’s fine-dining restaurant Atelier Amaro. Other than Vodka, be sure to try some Nalewka flavoured liquers which you can purchase from grocery stores or restaurants. Wild game in Poland is abundant and popular, with many animals making their way into the stomachs of locals. There are strict rules on the hunting and preservation of game in the forests, so there is a balance in the eco-system. 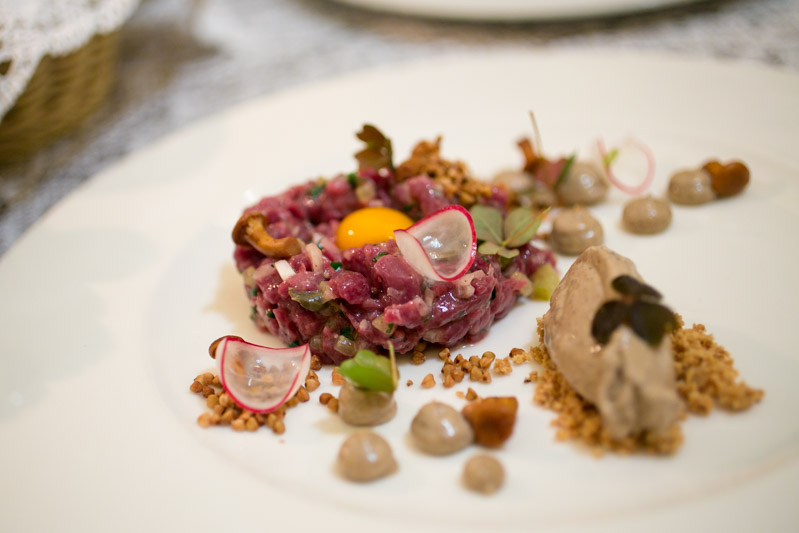 While staying at the historical railway station Hotel-cabin Białowieża Towarowa, I tried roe deer and red deer meat at Carska restaurant. The game meat is usually served raw a la tartare, or grilled. Due to the freshness of the meat hunted from the nearby forests, having it raw is quite the exotic delicacy I highly recommend trying. Ranging from rabbit to duck, you can find all sorts of amazing wild game in Poland. Chef Artur Moroz from Restaurant Bulaj makes an exceptional good crispy roasted duck that has been brined for days prior. Simply served with potatoes or apples, local duck should also be on any Poland visitor’s to-eat list. 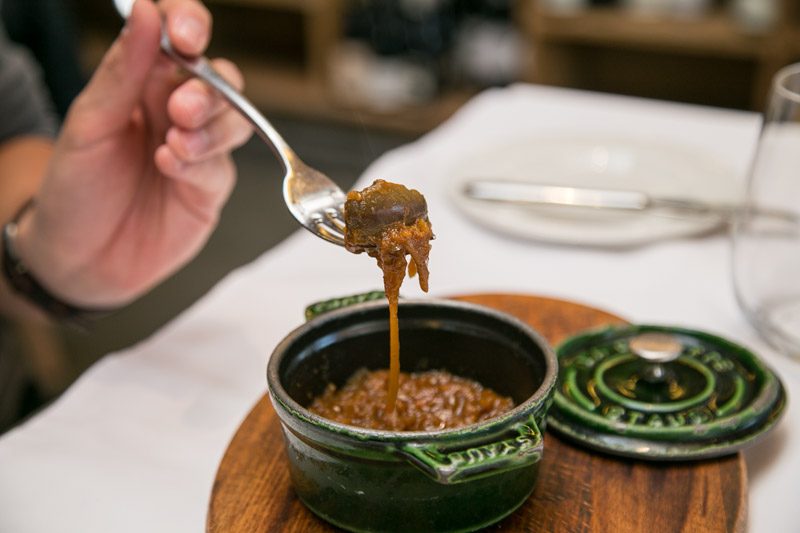 Offal and sweetbread are also commonly used in stews for those more adventurous to literally delve into the bowels of game meat. Cured fishes, especially herring, are common in Poland with many varieties pickled or smoked for added flavour and longevity. 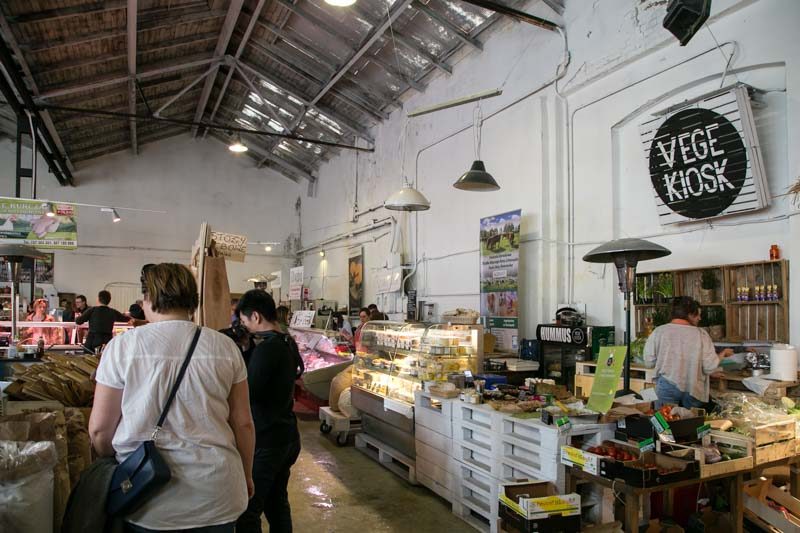 At the hipster BioBazar Fabryka Norblina marketplace, many grocers sell their fresh local organic produce including herring for take-home consumption. 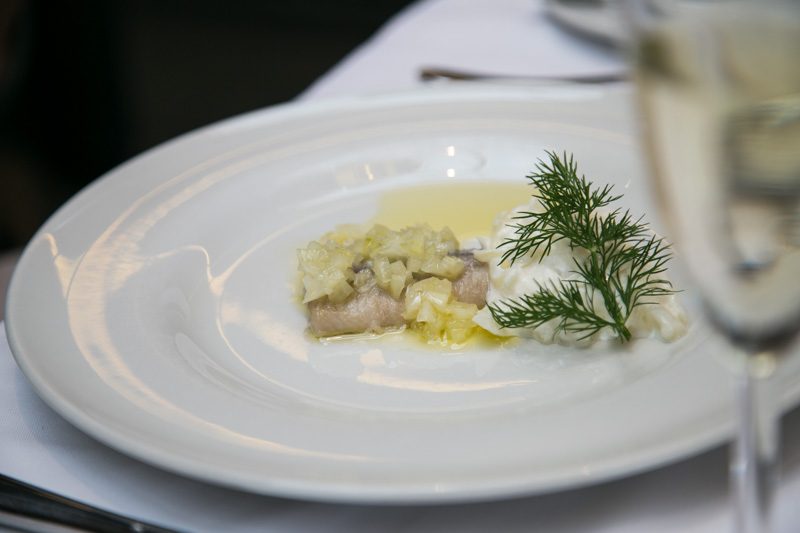 In restaurants, this small forage fish is usually simply prepared in oil and served with onions to give the oiliness some sweet balance – this dish is known as Śledzie. 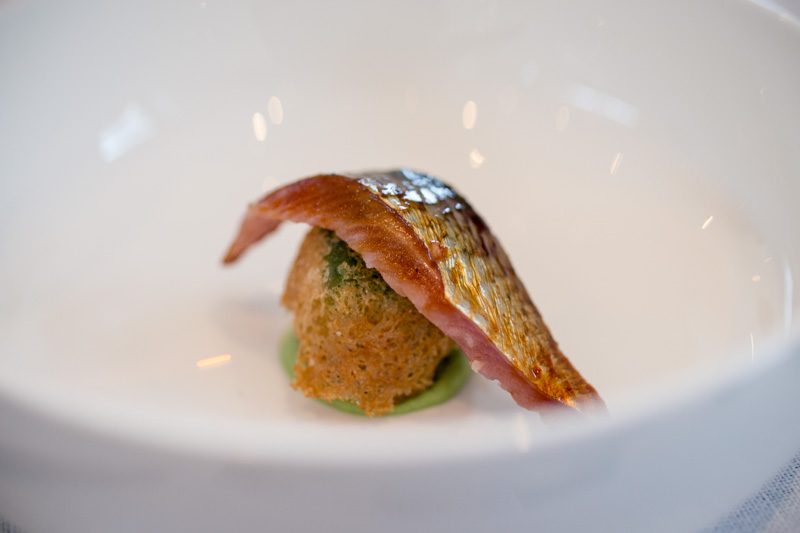 Due to its preserved method of preparation that can be kept through winter, Herring is deeply embedded in Polish culture and is always present during holiday feasts like Wigilia (Christmas Eve Supper in Poland). 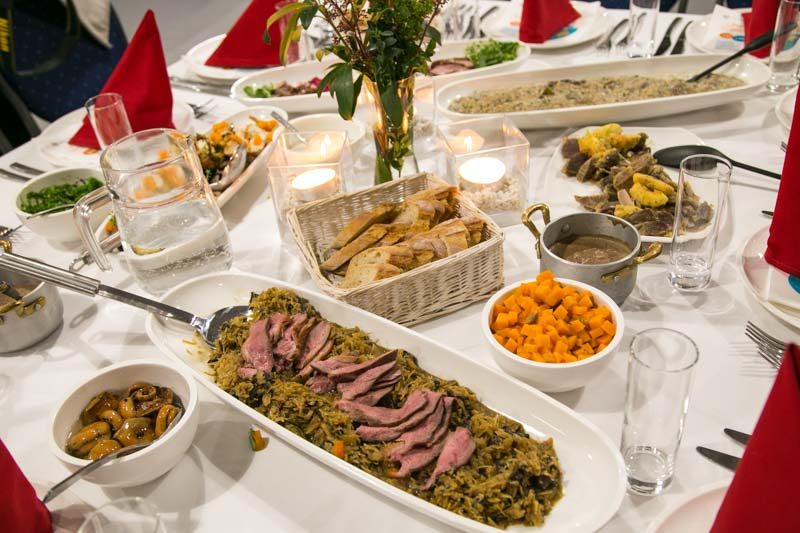 I hope I’ve enticed you sufficiently to buy a ticket to Poland to try all these amazing foods. For those of us in Singapore that lack this luxury of flying 12 hours across the globe, fret not.

There is a Polish Food Festival happening in Singapore that just might let you try some of these delicacies I’ve mentioned!

Happening from 18 May – 3 June 2017 across various locations, there will be cooking classes, parties (Polish Vodka to be expected) and of course, many Polish meals available to partake in.

For more information on venues and schedules, check out: www.polandshiok.sg