Located at Simpang Bedok, the second level of The Bedok Marketplace looks bright and lively with all the colourful “shophouses”. 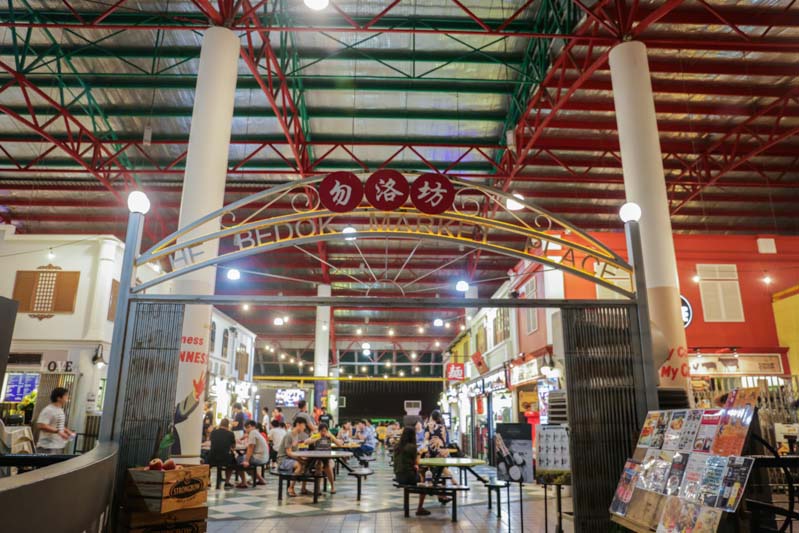 The “shophouses” are actually food stalls and the entire hawker centre is filled with your typical hawker stalls that sell food like mala xiang guo and bak chor mee. However, they also house a couple of bars and stalls that sell more “atas” food. 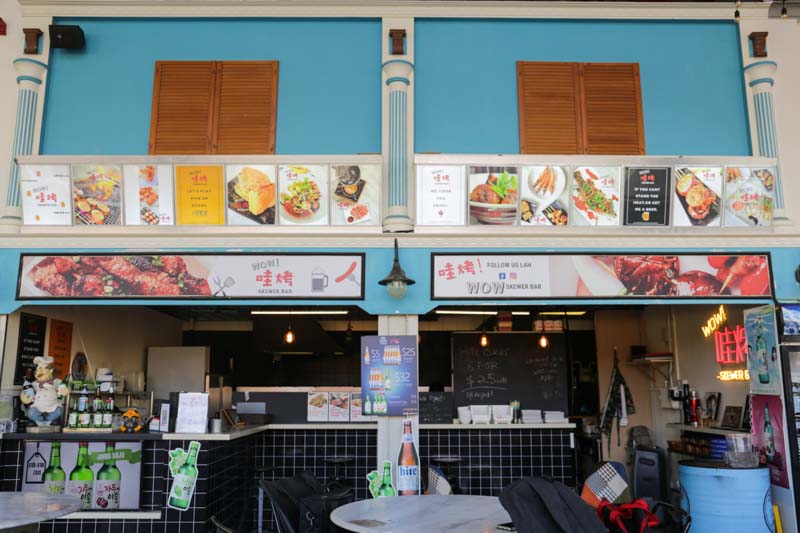 One of which is 哇烤 Wow Skewer Bar that’s sitting on the far right end of The Bedok Marketplace. When asked to introduce some of their signature dishes, the WOW Signature Handmade TAU POK (S$4.50 for 4 pieces) was one of the recommended dishes. The tau pok was fried till crispy and I was even able to hear the crunch as I bit into it.

Usually, tau pok lacks in taste but 哇烤 Wow Skewer Bar added their homemade minced meat inside so that it adds a little dimension to the dish.

The WOW Signature Handmade TAU POK is served with one of the best homemade belacan sauce that I’ve ever tasted. The spiciness and tanginess of the belacan pairs well with the slightly savoury dish. Unfortunately, they don’t sell the belacan separately, or I would’ve bought a few jars home. 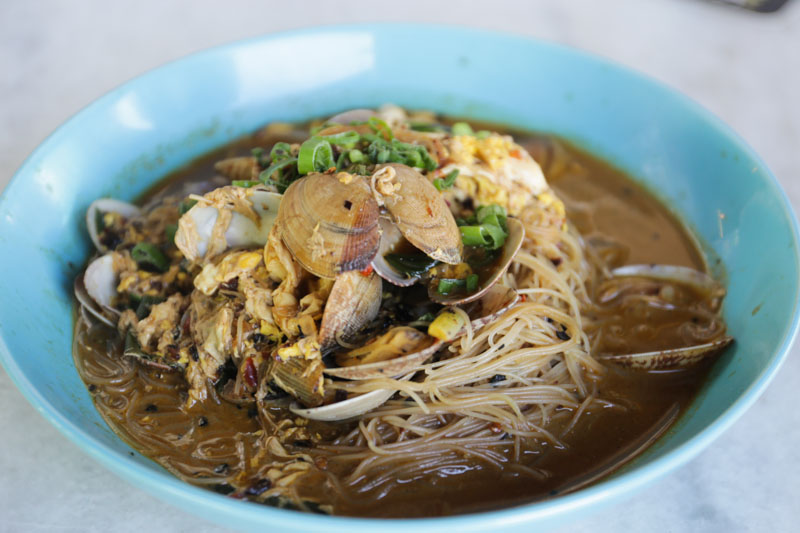 Under their cook and grill specials, the signature dish is their WOW LA LA Fried Bee Hoon (S$10). When it first arrived, we were shocked at how big the portion is. It can serve up to three people, especially if your group is planning to order a few other dishes. This reminded me of the wet bee hoon dish most zi char stalls serve, except it isn’t white like the typical wet bee hoon.

The bee hoon had a slight wok hei flavour, though there was also a hint of sweetness in the sauce. My favourite part of the dish was the lala which wasn’t very briny—unlike most lala. One of the sides they recommended is a little unconventional and not typically sold at most places—the Deep-Fried Chicken Gizzard In Salted Egg Sauce (S$8). A gizzard is an organ that’s similar to a stomach that can be found in the digestive tract of a chicken, and this is considered a delicacy in certain cultures. 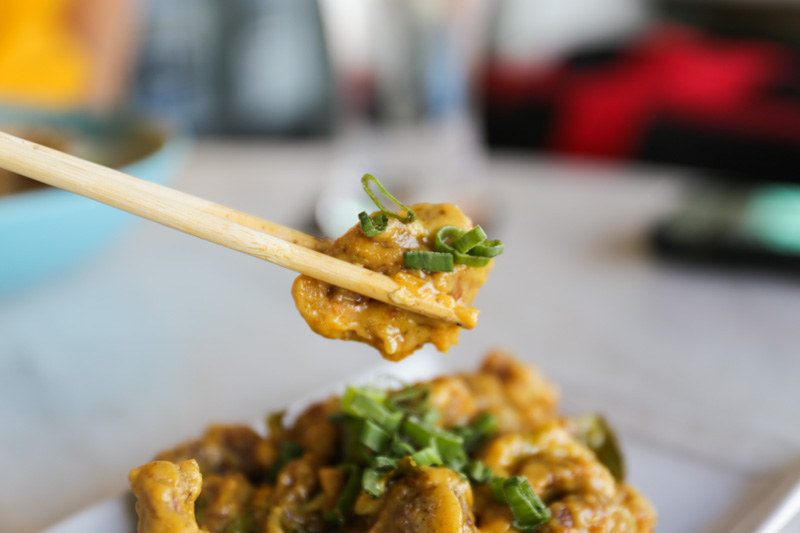 Covered in a thick and creamy salted egg sauce, the dish looked delectable. The gizzard had an extremely chewy and muscular texture so this might not be a kid-friendly dish as it is slightly tougher to chew. The sauce is also slightly spicy so if you’re with a child, you may not want them to eat this.

However, this would make for a good beer snack so you can jio all your drinking kakis and order this as a side dish. 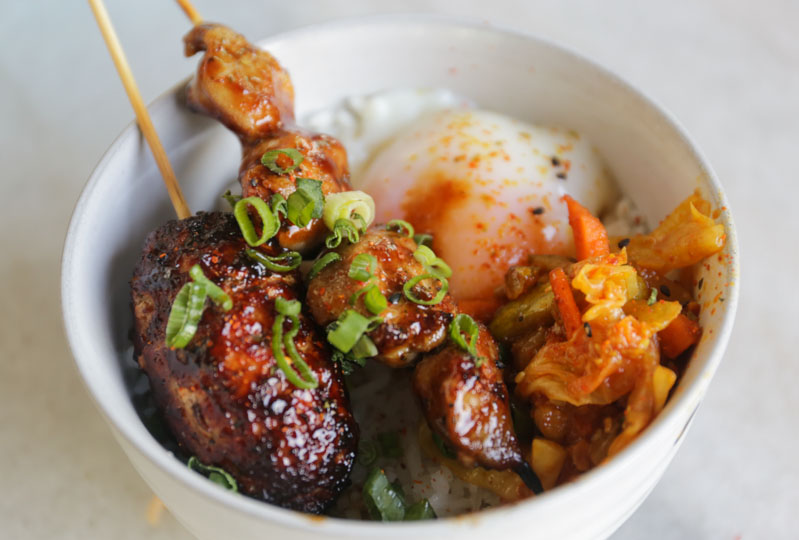 For anyone who knows me, you’ll know that rice is my staple so it’s a given that I had to try their WOW Skewer Rice Bowl (S$6). Each rice bowl includes rice (of course), one chicken thigh skewer, one meatball, an onsen egg, and crunchy and refreshing homemade achar. The chicken thigh was extremely tender and juicy as well. We were also told that all the meatballs are homemade. Both meat skewers were covered in yakitori sauce, which tasted like a less bold and less sweet version of teriyaki sauce. If you don’t like those meat skewers, you can also choose whichever skewers you desire. The minimum order, however, is two skewers. It seems like this place has a lot of must-try items, including the Fish Cake Skewer (S$2) and their Chicken Mid Wings Skewer (S$2.20). The Egg Plant With Special Handmade Mince Meat (S$2.20) is also a signature item that deserves a try.

You can pair these skewers with a bowl of fragrant white Rice (S$0.80). Alternatively, you may order their WOW Platter (S$13) that includes eight favourite skewers: two WOW Tau Pok, one Fish Cake, one Egg Plant with Mince Meat, one WOW Handmade Meatball, one Mid Wings, and two Chicken Thighs, accompanied by a serving of their homemade Achar.

Pro-tip: dip everything in the belacan sauce and it will amp up the taste of each dish. One dish that’s a hot favourite among their customer, though not on the menu, is the Chao Tah Bee Hoon (S$12). It’s served with a generous amount of lala served atop the fried omelette. The lala in this dish is stir-fried with their special chilli, giving it a sweeter flavour.

The charred parts of the omelette, especially the crusts, are also what makes this dish so delectable. The fried bee hoon was encased in the crispy egg crust. The slight bitterness from the charred parts and the saltiness from the bee hoon and egg plus the sweet flavour from the lala just hit all the right spots for us. 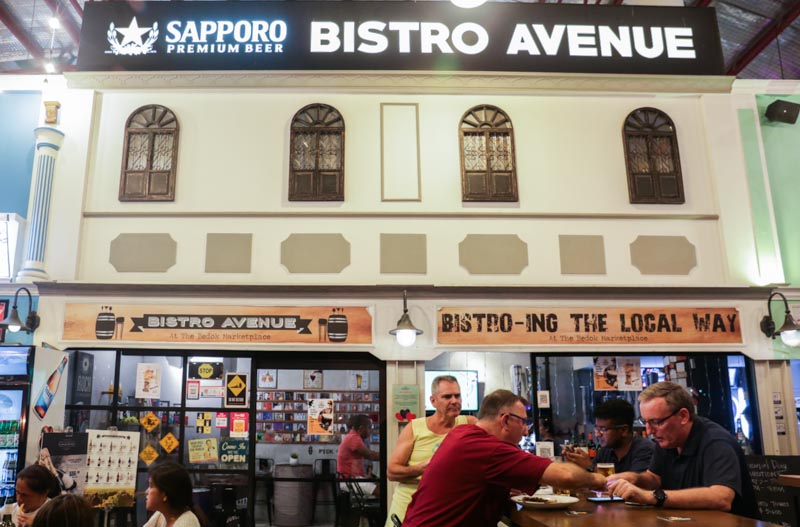 Also owned by 哇烤 Wow Skewer Bar and conveniently located right beside it, Bistro Avenue is a bar that comes alive in the evening. Customers can choose to sit in the air-conditioned area or outside where it’s bustling with noise and excitement.

You can even order food from 哇烤 Wow Skewer Bar and have it in the indoor area, although it is best to have your meal outside if you’re intending to have the Wagyu A4 Kagoshima Yakiniku on Hotplate (S$20) which is (literally) smokin’. When you want to chill and have some fun while drinking with your friends, you may head to the furthest corner of the bar, where there are dart machines, playable with a separate charge.

The concept of fusing yakitori and zi char together is what makes them interesting (plus the amazing food, of course).

If you’re looking for a place to chill and hang out with friends, 哇烤 Wow Skewer Bar should definitely be on your list of places to visit. Especially since they also own a bar right beside them. (Wink, wink) Catch Minions In SG From Now Till 31 July At Cold...