Fried prawn noodles or more commonly known as Hokkien mee, is uniquely Singaporean. Let’s not get started on the different versions found in our neighbouring countries, because that’s another discussion for another day.

Today, we’re focusing on Terence Chee, a Gen-Y 28-year-old hawker who has taken upon the ambition to make the best Hokkien mee in Singapore. I went down to his store to find out if he’s on his way to achieving that with this iconic dish. 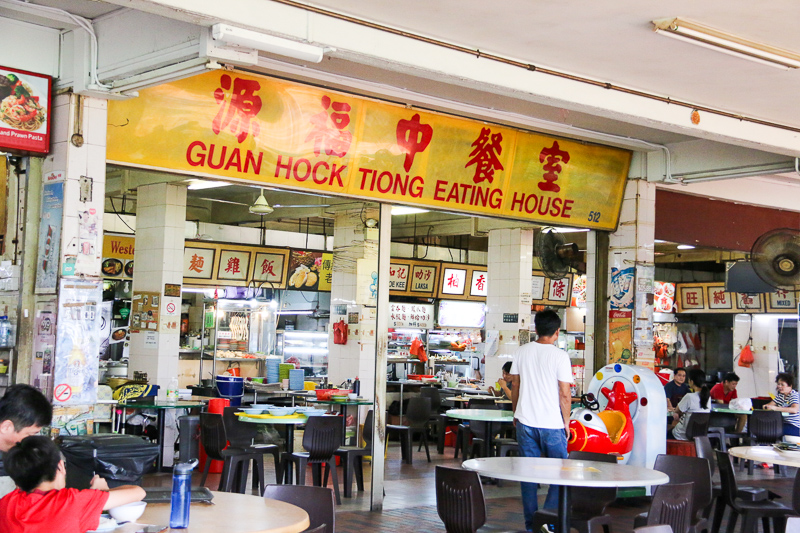 The kopitiam is rather old school; to be brutally honest, it looks in dire need of a revamp. There were flocks of birds constantly terrorising the outskirts of the premise. I withheld my judgement, as the saying goes, ‘Do not judge a book by its cover’. Spotting the stall in the premise, I took a closer look at the prices and caught a whiff of the aroma of the Hokkien mee being stir-fried. They offer two price ranges, S$4, as well as S$5. It’s good to note that their prawn noodles are the wetter variation of fried prawn noodles. I was famished and ordered the S$5 portion of their Hokkien Mee. As I carried the plate of Hokkien Mee to an empty table, the aromatic smell slowly wafted into my nose, tempting me to sneak a bite before I could even snap photos of it. Squeezing the lime onto the Hokkien Mee is a must when it comes to this iconic dish.

It adds extra zing and tanginess to the dish, giving it a contrasting sour taste and adds another layer of complexity to the dish that’s heavily drenched with fragrant stock made from prawn heads and pork bones. 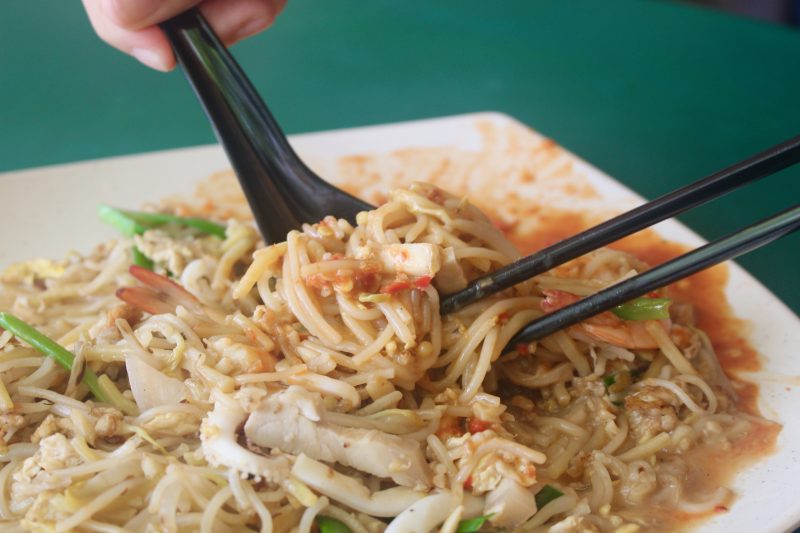 Let’s not forget about the sambal chilli, more commonly known to us locals as belacan. Before indulging in this promising plate of Hokkien Mee, I mixed the belacan in well to give it a consistent spice throughout this massive plate of sorts.

I started digging in with high expectations of it. 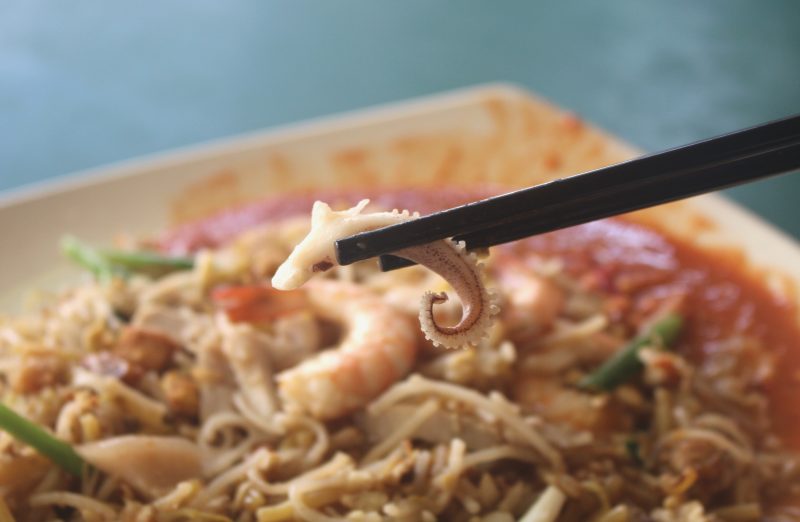 The squid, also known as sotong to many, was picked up as my first ingredient to savour. Biting into the squid, I was so satisfied with the non-existent rubbery texture of the squid, which is commonly found in many Hokkien mee dishes. It fell apart perfectly into two as I bit into it. 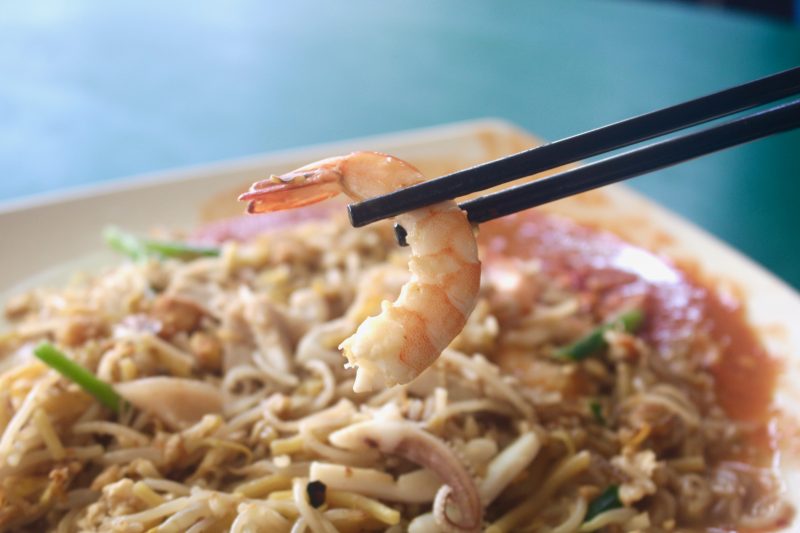 As I took a bite of a prawn, I could tell the prawns were quite fresh as the texture was firm but bouncy. I noticed that they deveined the prawns well; there were no nasty dark traces in the prawn at all. Props to them for that! 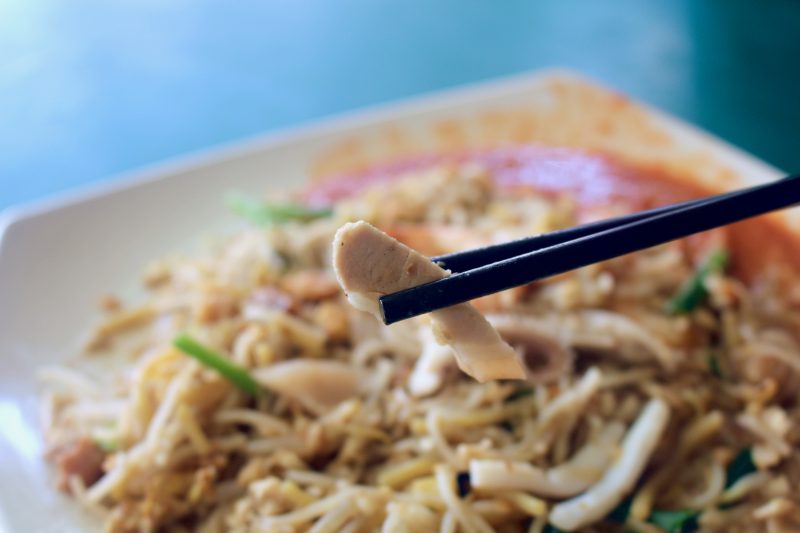 The pork belly, even though it was quite miniature in size, had satisfying fat-to-meat ratio. It was succulent and carried a small amount of fat that gave balance to the entire piece of pork belly,

I appreciated the size of the pork belly as it was easy on the mouth, especially when it came to stuffing my mouth with one-too-many ingredients at once. 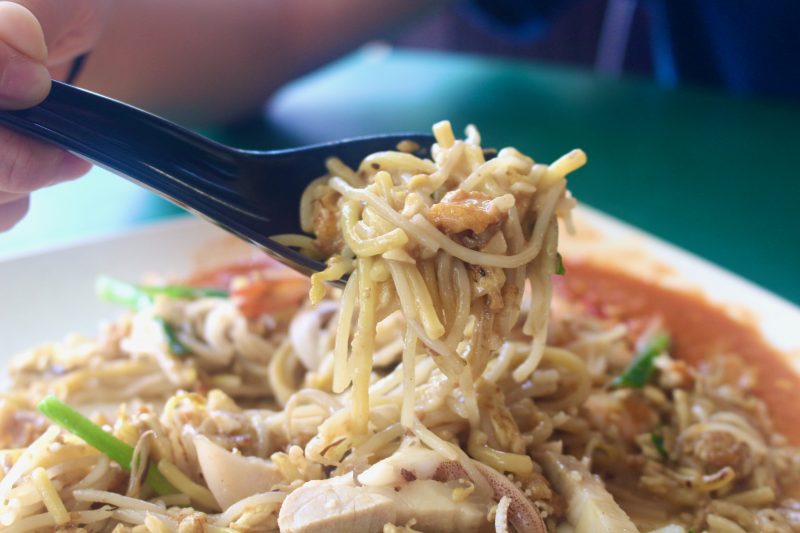 The crispy fried lard pieces were satisfyingly crunchy, and so were the pork cracklings.

The entire plate was exploding with the umami flavours of the prawn and pork stock, and I enjoyed the plate of Hokkien mee delightfully.

Would I come back to Xiao Di Fried Prawn Noodle just to get this plate of Hokkien mee, you ask? Well, I would consider provided the staff fix their uptight attitude. I do know that they are there to sell good kopitiam bites, and their food speaks well for them. But it would be nice to receive customers with warmth.