Brought to you from the folks behind Symmetry, Xiao Ya Tou is a modern fusion restaurant and bar that is tucked away on Duxton Hill. Known for their eclectic brunch offerings, they’ve transformed Western cafe staples into quirky dishes with an Asian flair.

If menu items such as the Unagi Eggs Benedict and Truffle Pork Dumplings are right up your alley, take a detour to this retro eatery to sample the imaginative dishes they have in store. Once you step inside the restaurant, you will find that the interior is a cross between old school and new age, with lanterns hanging from the ceiling and retro-looking posters plastered across the walls.

The whole aesthetic is also completed by tons of other eccentric paraphernalia scattered throughout the restaurant. Decked out with the full works, the tasteful ambience itself was enough to draw me in and raised my expectance for the food served there. 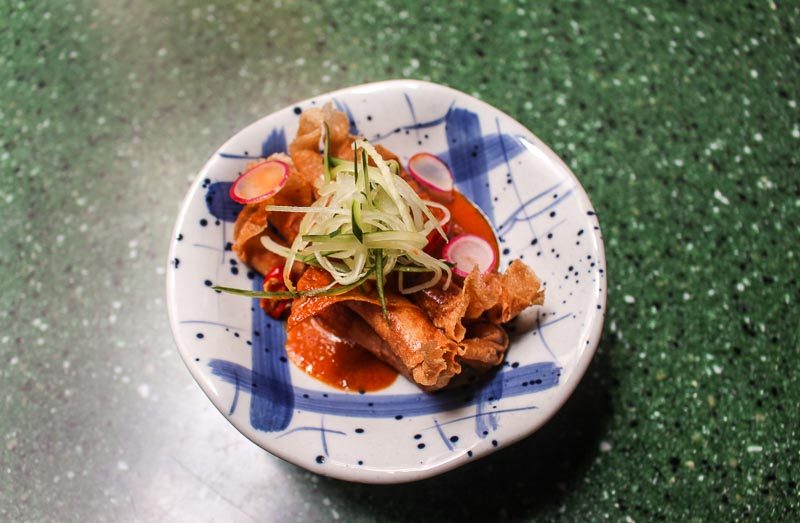 Accompanied by a tangy tamarind peanut sauce, the Crispy Otak Rolls ($12) were served to us in a lovely porcelain bowl. Deep-fried into a spring roll, the otak filling was soft and contrasted well with the crisp and thin exterior. 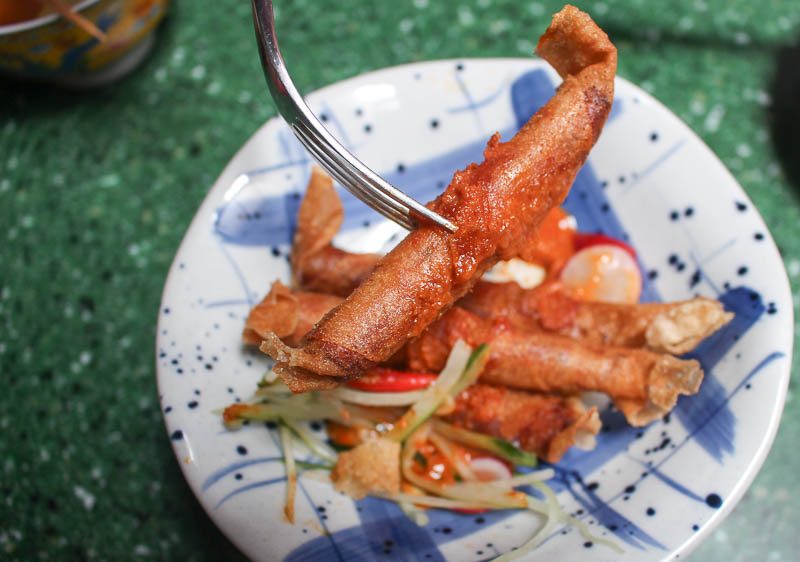 As a savoury appetiser, the rolls struck a good balance between sweet and spicy when dipped into the tamarind peanut paste. 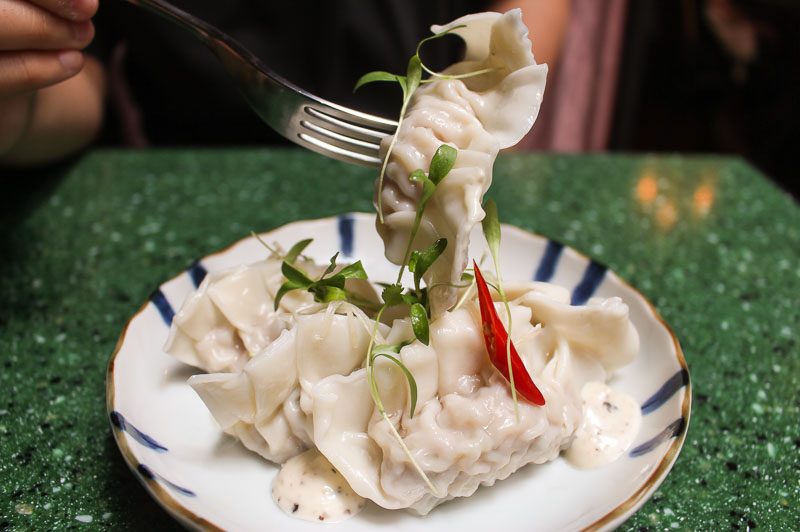 Doused with a ginger and chilli vinaigrette, the Truffle Pork Dumplings ($12) were unfortunately, not much of a novelty. While I was expecting a more distinctive truffle taste, there was little to none.

In fact, it tasted more like regular pork dumplings to me. Perhaps they could rework this dish by taking the flavour of the truffle up a notch. As the name suggests, the Small Shrimp Fry Onion Biscuit ($19) is basically onions that are deep-fried with small shrimps, and topped with mayonnaise, seaweed flakes and a sprinkle of sesame seeds. 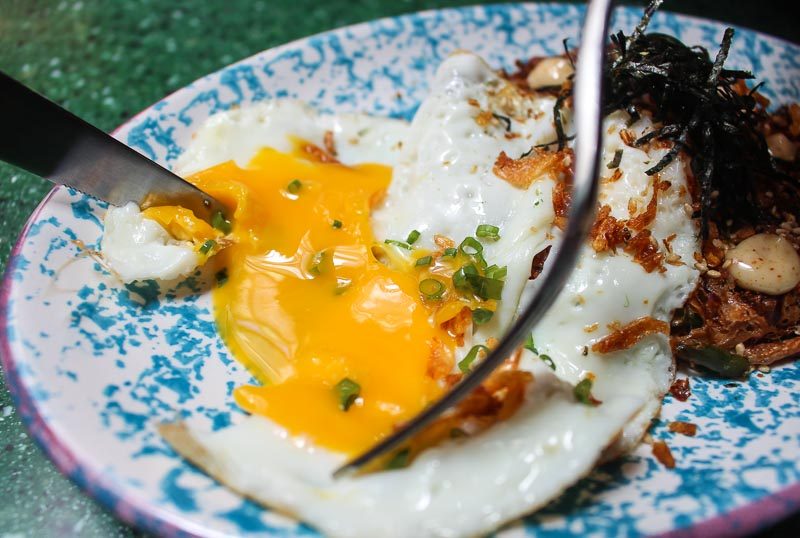 The dish comes with a sunny-side-up that was served with a satisfyingly runny egg yolk, which flowed as soon as the egg yolk was split. 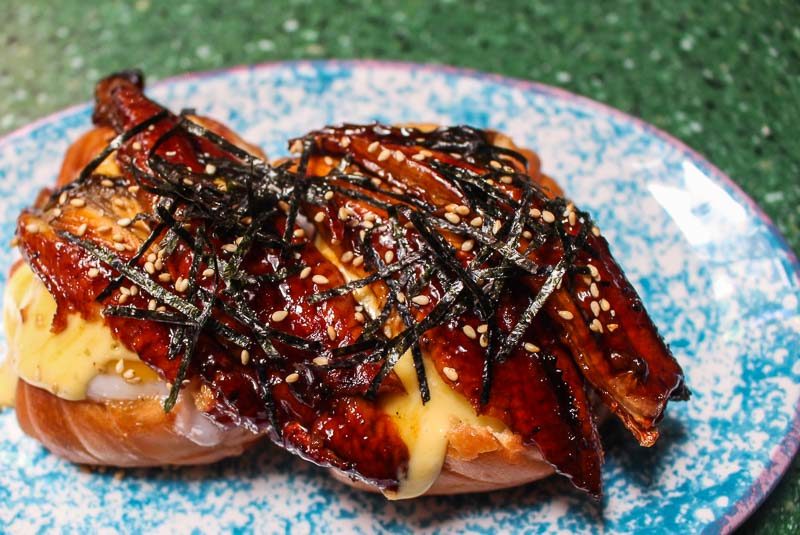 It’s safe to say that the Unagi Benedict ($23) was probably my favourite dish. Two deep-fried mantou breads are topped with mushroom duxelles and a low temperature egg before being slathered with a yuzu hollandaise sauce.

The dish is completed with grilled slabs of unagi, which were a refreshing change from the usual smoked salmon commonly used in an eggs Benedict. 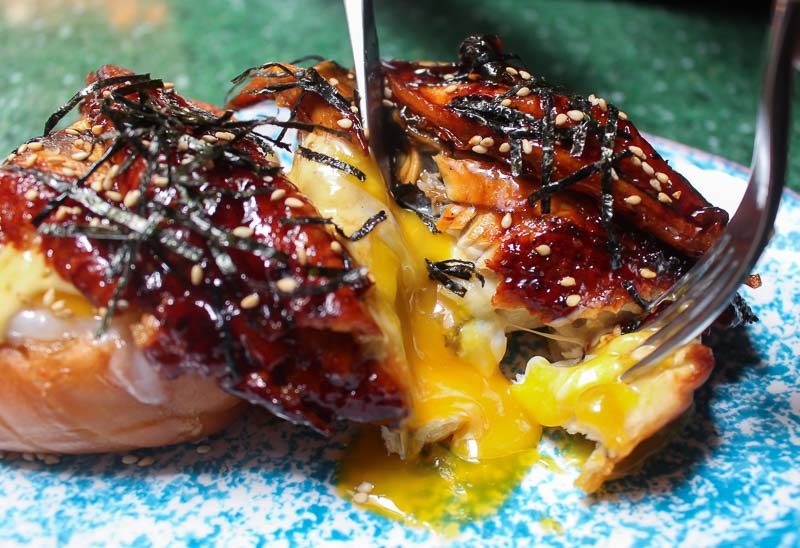 As soon as you cut into the middle, the yolk oozes from the creamy lava egg and drenches the mantou bun. When eaten as a whole together with the teriyaki-glazed unagi and mushroom duxelles, it was simply a match made in heaven.

The yuzu in the hollandaise sauce also enhanced the taste of the dish as it complemented the slightly charred unagi and sweet mantou fairly well. This may not look like the biggest portion, but it was fulfilling to say the least. 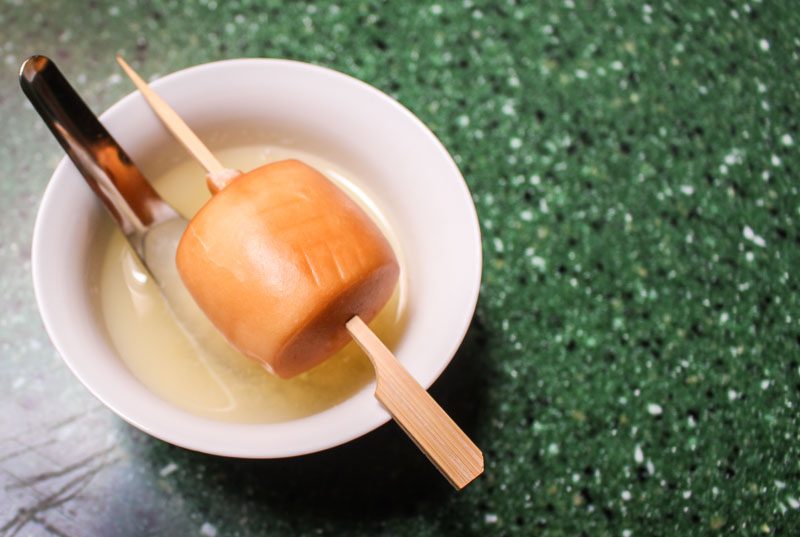 Our main dish came with a complimentary Tau Suan Soup & Mantou Bun. Although this was nothing out of the ordinary, the warm mung bean soup really helped to wash down the strong flavours from the previous dish.

As in the Unagi Benedict, the mantou bun certainly did not disappoint. Fried in a similar fashion, it boasted the same golden brown exterior with a fluffy interior within. Dip this into the soup and it will most definitely make for a great finish to your meal. 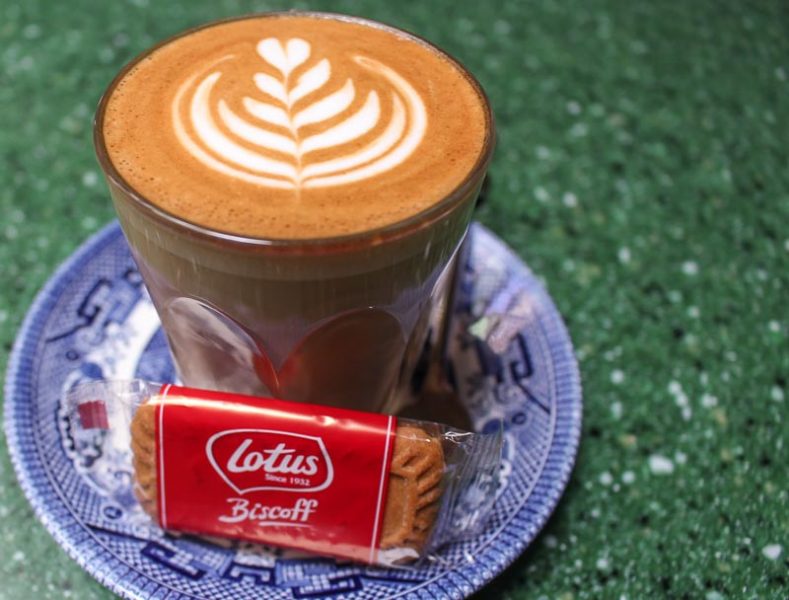 Finally, we had the Latte ($5.50) that came with a Lotus caramel biscuit. With two shots of espresso in a single cup, this was strong enough to my liking. However, if you’re not a fan of coffees that lean on the bitter spectrum, you can request for some sugar cubes to sweeten it.

For comforting yet indulgent brunch items, head over to Xiao Ya Tou to enjoy their unique renditions of the cafe fare we’ve all come to love. They might even change the way you view Modern Asian cuisine.

As brunch is only served on weekends, you can opt for the modern zi char dishes on the menu if you happen to stop by for dinner on a weekday. I’m sure they will be equally as creative in that department.