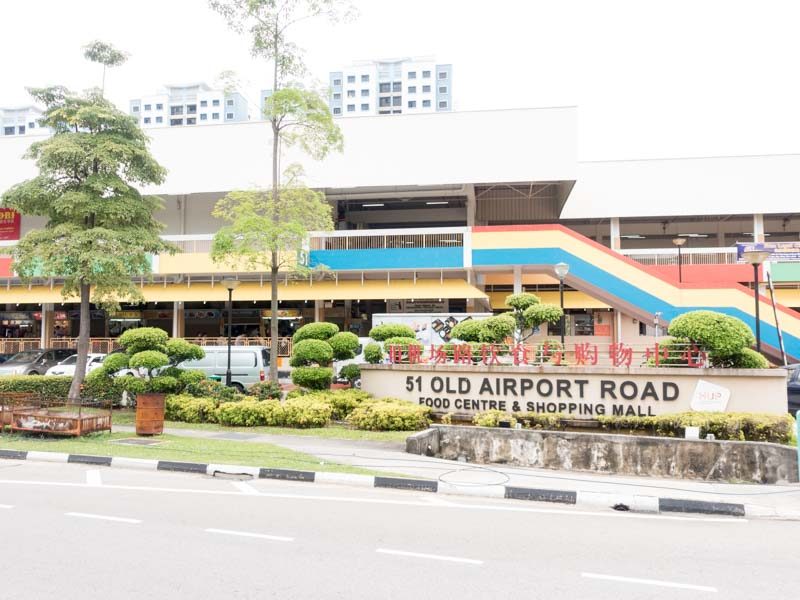 Old Airport Road Food Centre is home to some of the oldest hawker stalls who have had a part in pioneering Singapore’s hawker culture. It also the place where a few controversies have occurred; where a few versions of the same food have taken hold of customers’ attention, all in a bid to win over their stomach.

Amidst its myriad of good eats, lor mee is one of the dishes that’s garnered divided loyalty, with Xin Mei Xiang and Xiang Ji Lor Mee vying for the top spot in the food centre. 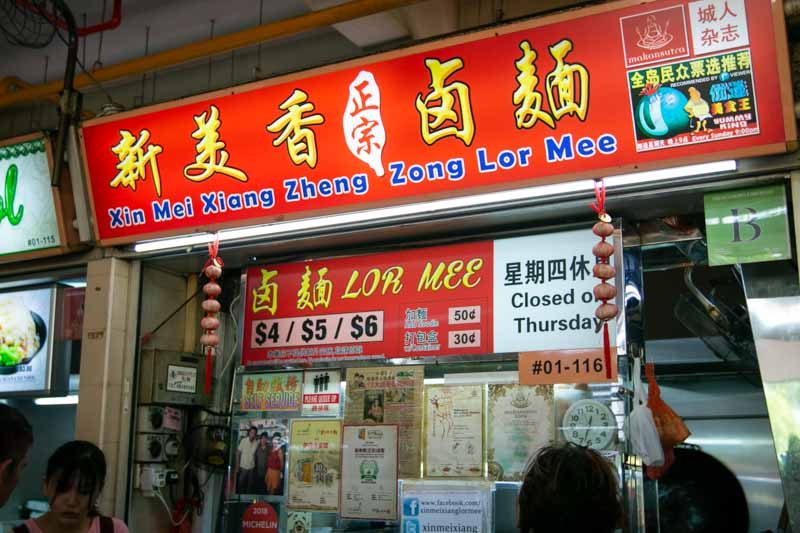 Xin Mei Xiang Zheng Zong Lor Mee reigns as OG — the authentic lor mee. The queues are telling of its popularity, and they even update their Facebook page as to whether they would be open for business the next day! Not too many stalls away, Xiang Ji Lor Mee has been gradually growing their base of regulars and is eager to claim themselves as the crowd favourite. But is the unassuming underdog a friend or foe? 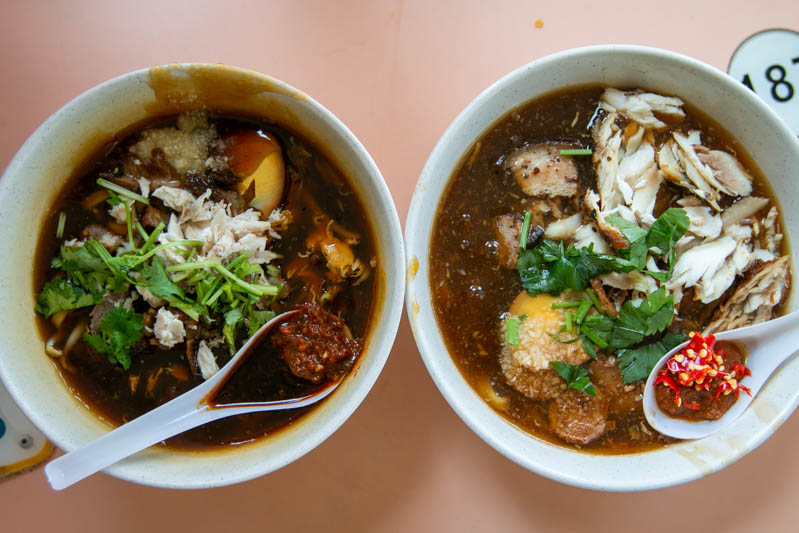 Lor mee is a dish I especially enjoy, and would like to say I’m quite particular about. For starters, both stalls sport a similar choice in bowl colours. Visually, Xiang Ji has a bigger bowl and was more generous in their S$4 portion.

The base basically holds everything together in lor mee. Everything will be in contact with the gravy, so I reckon its taste could make or break your experience of enjoying this local favourite. This showdown begins with mixing up the contents of the bowl. Xin Mei Xiang’s gravy was darker, but a little more see-through than Xiang Ji’s. The latter stall’s bowl greeted us with a lighter coloured gravy, and it was so much thicker in consistency! 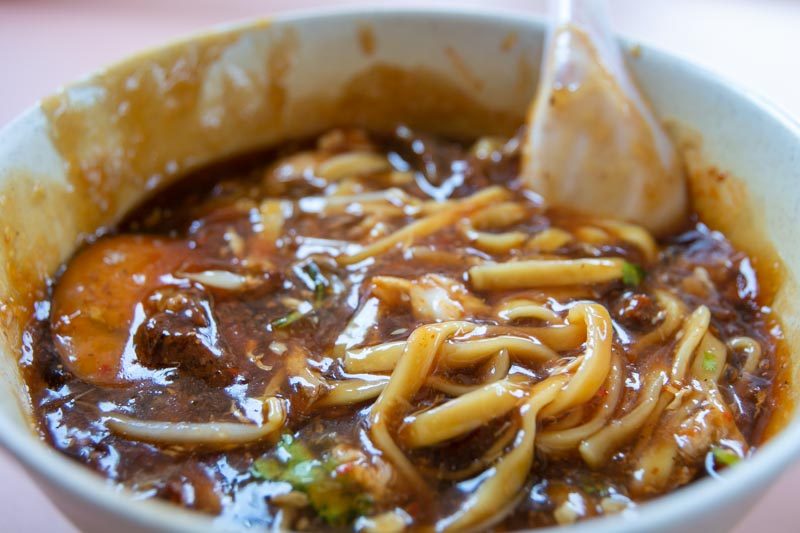 Against all biases, in which I personally prefer a thicker gravy in my lor mee, we dug into the lauded Xin Mei Xiang’s lor mee first. The thin gravy resembled a sauce or a soup, rather than lor mee chap.

However, this meant that there was less starch, and possibly higher concentration of the base stock, along with dark vinegar. 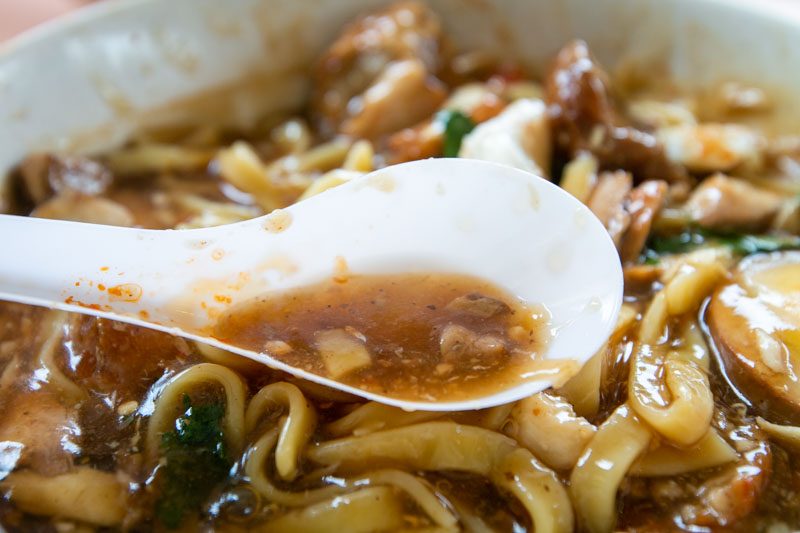 We struggled a bit to get the gravy from Xiang Ji’s bowl into our spoons because it was so thick! The viscous gravy was almost opaque, and it presented a milder flavour than the former. 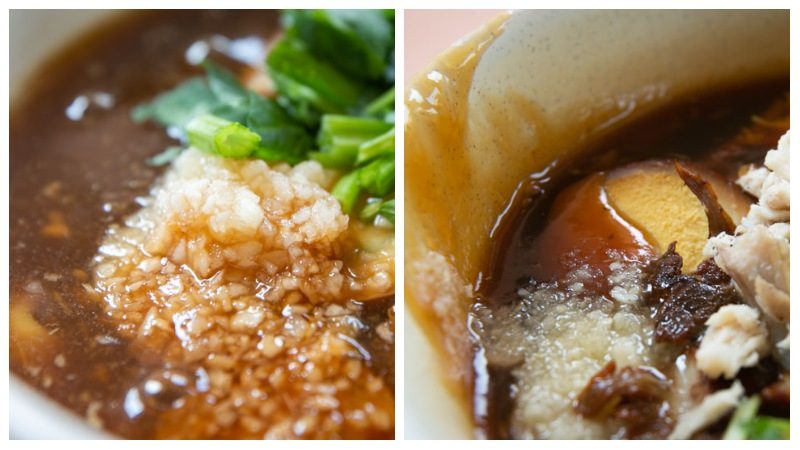 To complete the gravy experience, minced garlic is essential. For a bigger bowl, Xiang Ji had a bigger portion of garlic to match the amount of gravy. Meanwhile, Xin Mei Xiang placed a humble amount that floated on the surface as a finishing touch. Well, I’m divided on this one! Xin Mei Xiang’s gravy was indeed full of flavour, but I’m not huge fan of how it sloshed around in the bowl like soup. Although the viscosity of Xiang Ji’s was a delight in my mouth, I couldn’t hold as high a praise for its taste though.

Albeit normal, the quality of the yellow mee is another essential factor for this dish. Flat noodles are a must in lor mee, and it should complement the umami notes of the gravy. 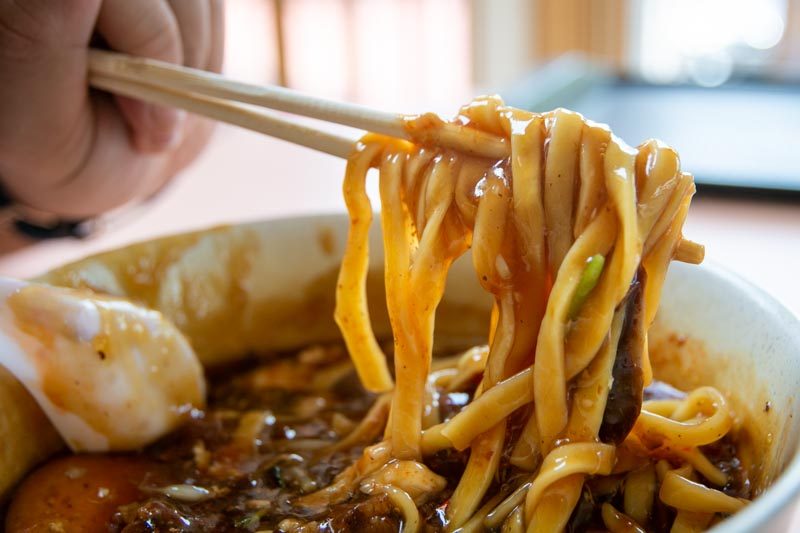 Loading up our spoons from Xin Mei Xiang’s bowl, the noodles were firm to the bite. The strands weren’t too long either, so it was easy to get a whole spoonful without losing any noodles to the table. 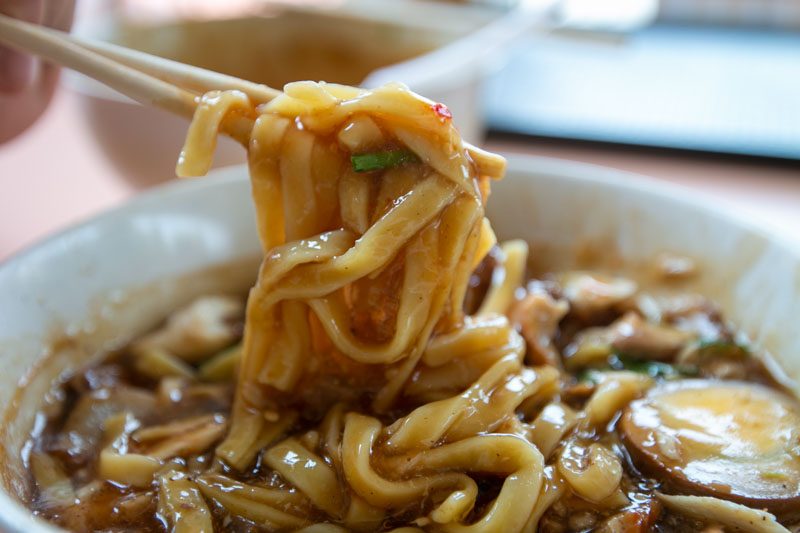 Next, we tried Xiang Ji’s noodles. I noticed that the noodles were starting to stick to the bottom of the bowl, and they were breaking apart quite easily. I suspected that the thick gravy made it slightly more difficult to scoop anything up, really.

Okay, so the noodles were normal, and they probably tasted the same. But for the texture and the whole eating experience, this one went to Xin Mei Xiang.

The ingredients themselves should be well-cooked before being tossed into the fray. Of course, not every bowl of lor mee contains the same types of meats or additional toppings. I think they should be sufficient such that you have enough to pair with the noodles.

Like I mentioned earlier, Xin Mei Xiang’s S$4 serving already paled in comparison to Xiang Ji’s in terms of visuals. In Xin Mei Xiang’s lor mee, there was a decent amount of steamed fish, braised pork, and along with the standard half of a braised egg. Upon mixing the contents together, the meat broke apart and was swallowed into the gravy. 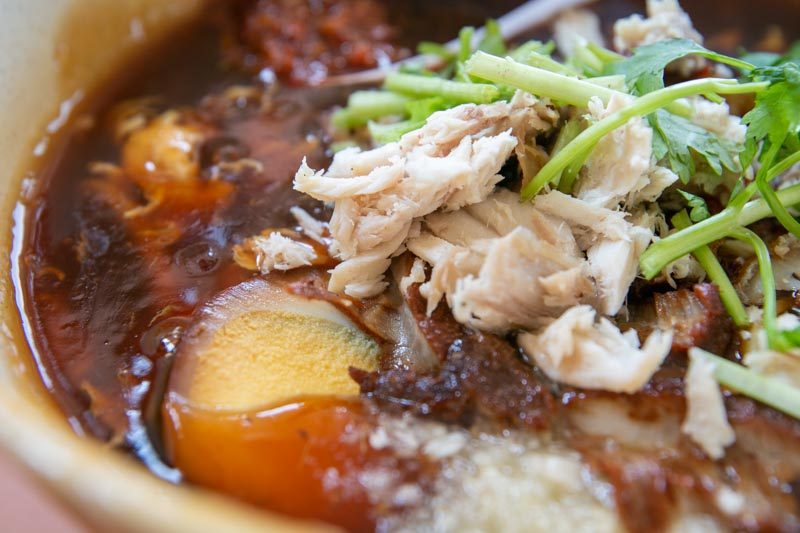 Undeterred, we managed to fish out the meat. We loved the steamed fish and its clean taste. The braised pork was undoubtedly tender, and its flavour was heightened by the delicious gravy. 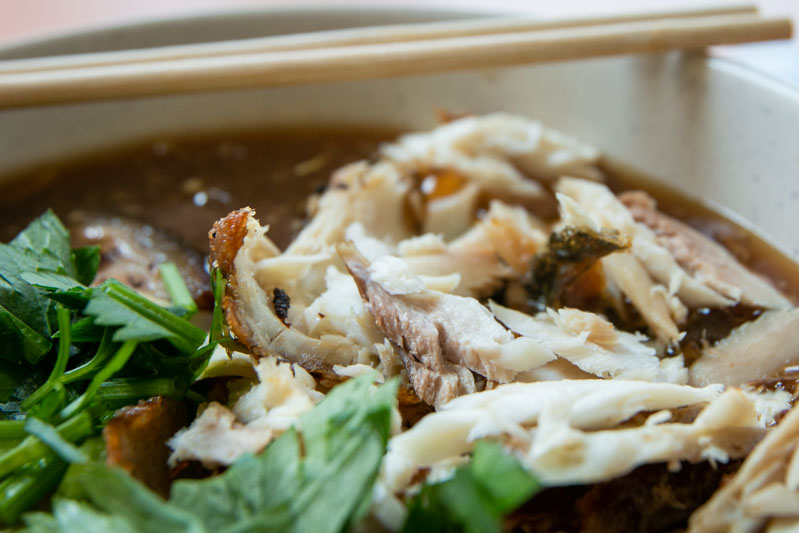 On to Xiang Ji’s cuts of meats, their bowl featured fried fish in contrast to the former’s steamed fish. After tossing everything around, the meat was still intact. We were lucky to have a large piece of fried fish skin, which my companion devoured eagerly. 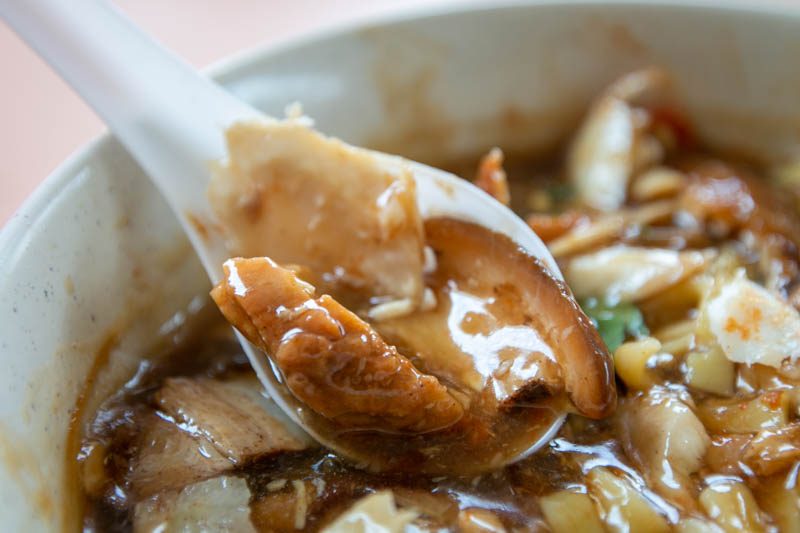 The fish meat itself might have been over-fried, giving it a firmer bite. With generous portions of the braised pork, we had meat in almost every spoonful.

Additionally, Xiang Ji’s lor mee also has ngoh hiang, something that Xin Mei Xiang left out of their bowl. I think this fried pork roll was the much needed spice for Xiang Ji’s gravy.

Singaporeans love their chilli, although some of us have trouble gauging how much is too much. Nonetheless, the spicy kick from the chilli should not overpower the entire dish. Instead, it should add a nice tang of heat and still tie in nicely with the overall dish. I think the best kinds are the ones that accentuate the flavours of the existing ingredients! 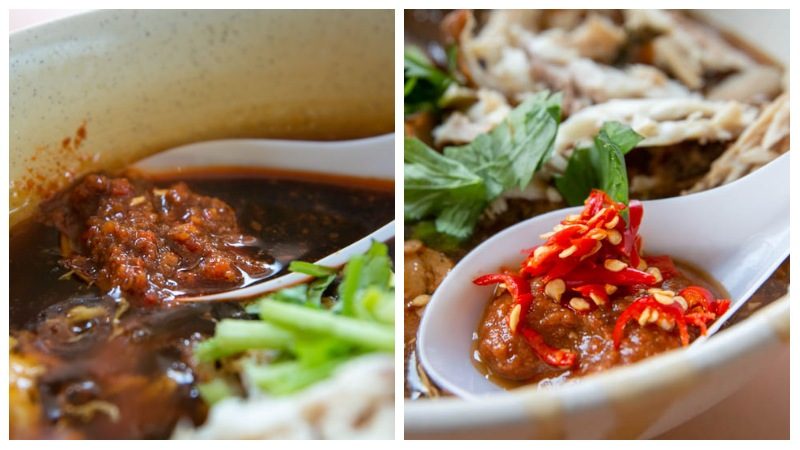 Both stalls served their chilli in the spoons provided. I appreciated the presentation because I can try the chilli for myself, and gauge how much is enough before dousing it in the rest of my food. 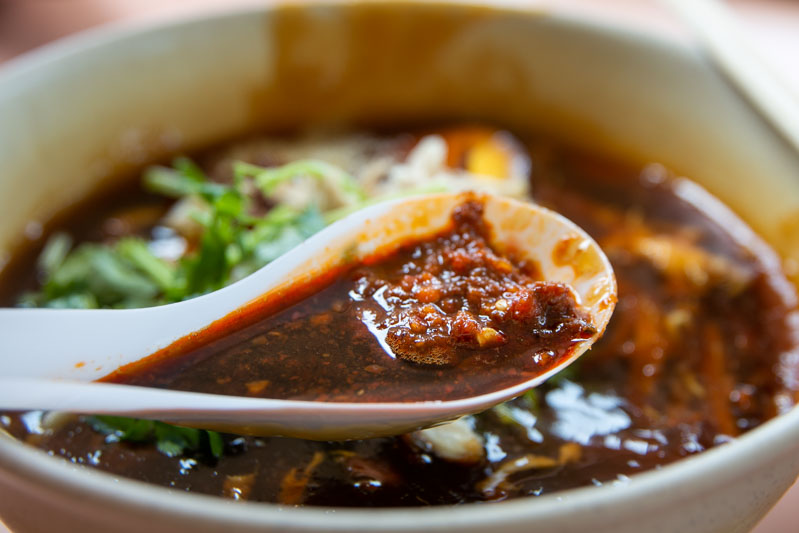 Dipping our chopsticks in Xin Mei Xiang’s first, the chilli tasted more like hae bee hiam rather than spicy chilli. It’s definitely suited to their version of the gravy, and the blend between the salty and sour flavours was pretty mind-blowing too! 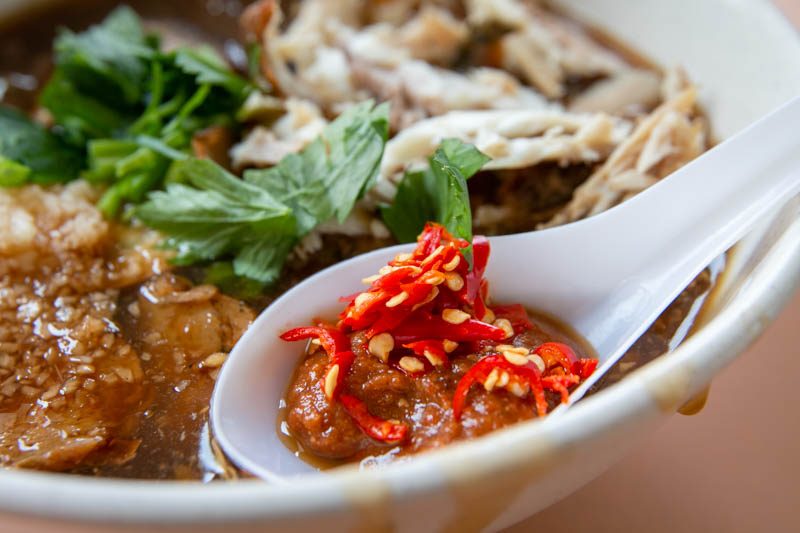 Xiang Ji’s spoonful of chilli looked a bit more menacing because of the chilli padi cuts that sat atop the belacan. Cautiously, we got just a little bit on our chopsticks to give it a try. My companion found it way too spicy, while I enjoyed the smoky depth of the sambal. A few more dabs into Xiang Ji’s chilli soon turned my tongue numb. I recommend that you start out small and ask for less chilli, as this one has a spice level that could potentially knock the already-mild flavour of their lor mee out of the park!

Therefore,  might just give Xiang Ji a pass and head up to Xin Mei Xiang for a tamer, yet umami-ful chilli paste. 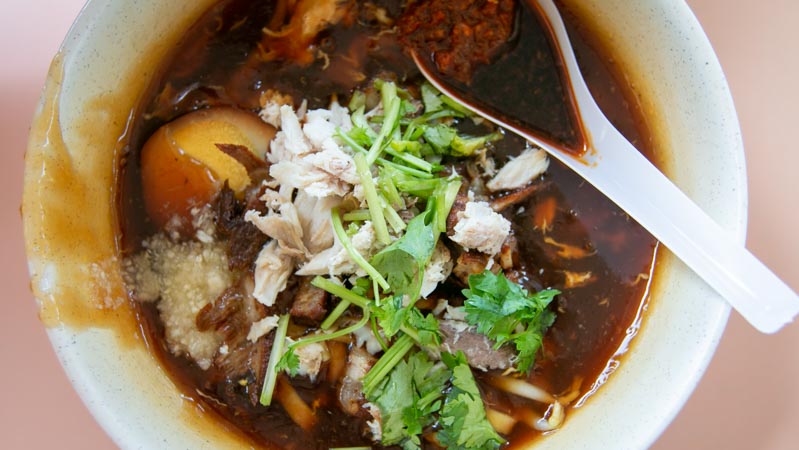 Singaporeans aren’t big fans of queues, but when they hear something is that good, they might just bear with the heat and wait. We waited 30 minutes for a bowl of Xin Mei Xiang lor mee, whereas Xiang Ji served us our lunch in a third of the time. 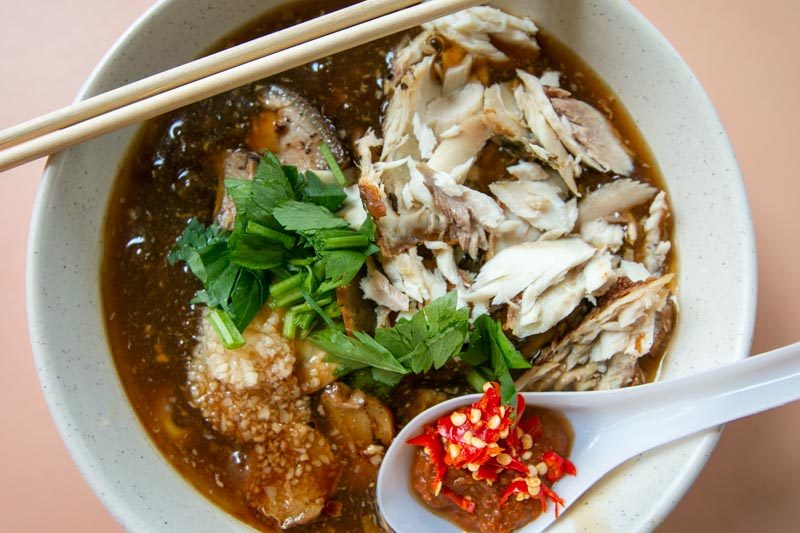 For the price and what it’s worth, Xiang Ji really impressed us. Although sporting long lunch queues, both of us felt that Xin Mei Xiang wasn’t really much to rave about.

I think we have our winner here — Xiang Ji is just as good, probably an even better option to satisfy your lor mee cravings!

You know what would be absolutely perfect? A bow of lor mee with the portion that Xiang Ji gives, and have Xin Mei Xiang’s rich and luscious gravy instead.