Kolo mee is becoming more and more popular—I dare say, more than wanton mee—and I can see why. The curly noodles are tasty on its own, to a point that it doesn’t even need to depend on any of the accompanying ingredients for a boost of flavour.

I discovered Yummy Sarawak Kolo Mee by accident—I intended to visit another stall at Tampines Round Market & Food Centre but it was closed. As a result, I picked the next best stall (the one with the longest queue), and there I was eating kolo mee. I took a while to decide what I wanted from Yummy Sarawak Kolo Mee because the menu was so extensive. Most kolo mee stalls I’ve been to only sell a handful of dishes, but this popular stall had over two dozen.

I spotted unique dishes like Spare Ribs Noodle, Mushroom Noodle, and even Chicken Feet Noodle! And of course, all these dishes are served with kolo mee, but you can opt for other noodles like ee mian and you mian if you’d like.

What makes kolo mee so different from other local staples like wanton mee is the noodles. It’s made of egg whites and without “kee”, a type of alkaline water that gives regular noodles a certain astringency and sharpness. Tampines Round Market & Food Centre is a popular haunt by many East siders. It’s been there for as long as I can remember, and my parents would often bring me there for breakfast when we used to live in the area.

I love the hawker centre because of how spacious and open it is. Because of its unique doughnut shape, you could stand in the middle of the doughnut, make a 360 degrees turn, and you’d be able to see all the available stalls at one go.

In fact, that’s exactly what I did when I was looking for things to eat. 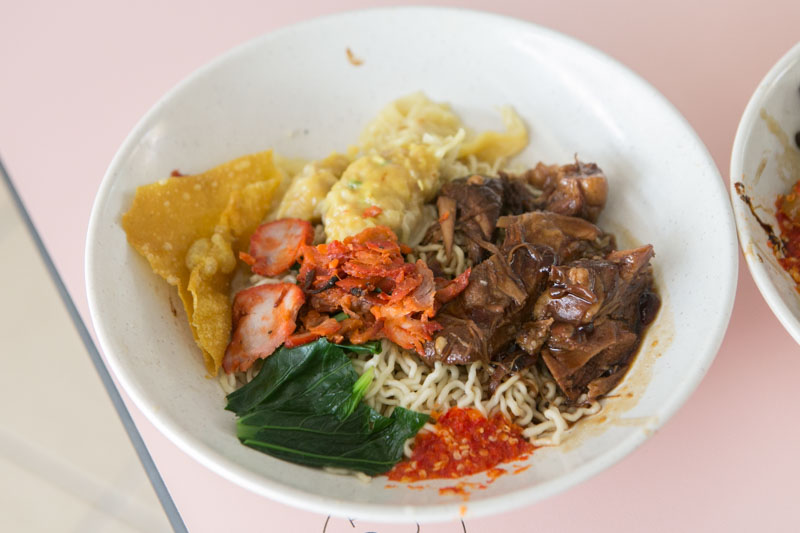 The first dish I got was the stall’s signature: Signature Sarawak Kuching Kolo Mee (S$4).

While most kolo mees come with a mound of minced pork and char siew slices, this stall was pretty different and served fried wontons, dumplings, pork ribs, char siew slices, as well as a dash of chilli padi on the side.

It reminded me of wanton mee, but the bed of white curly kolo mee gave it away. 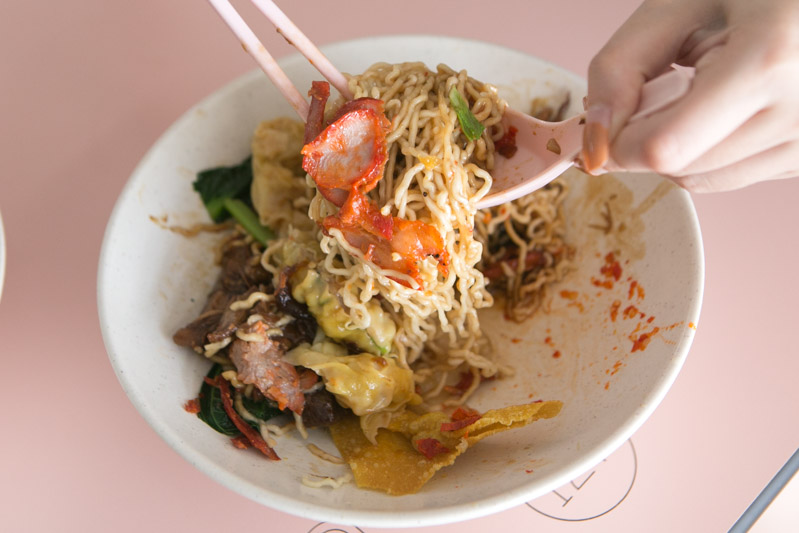 Most kolo mees are tossed in shallot oil, but this particular bowl of kolo mee was accompanied by a soy-based sauce, which added a fragrant saltiness to each bite.

I was slightly disappointed to see how fast the noodles had soaked up the sauce—that meant it would probably turn soggy fast—but I was super satisfied when I slurped up a huge mouthful of kolo mee and discovered that it was still springy, light, and fragrant.

I highly suggest eating the noodles on its own before tossing it in the sauce. This way, you can taste the original flavour of the curly noodles—it should be mildly sweet and aromatic. I can handle spicy food, but Yummy Sarawak Kolo Mee’s chilli padi made me grab the nearest drink next to me.

I say that in a good way, mind you, because the chilli padi was so bitingly spicy that it gave each mouthful of kolo mee a fresh burst of flavour. It reminded me of the chilli padi you’d get at your local nasi padang stall—tangy, sour, but addictively spicy. 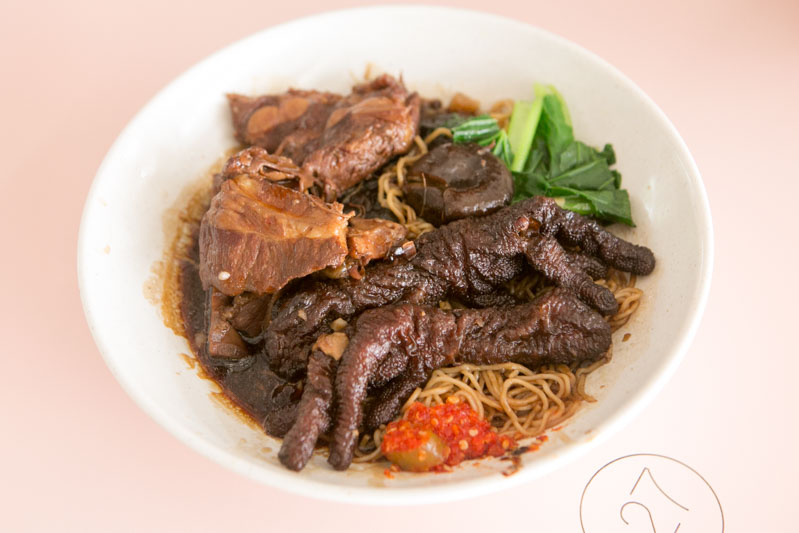 Although I don’t eat chicken feet, I knew I had to get the Spare Ribs Chicken Feet Noodle (S$5) because the portions were huge. Just look at that braised chicken feet! 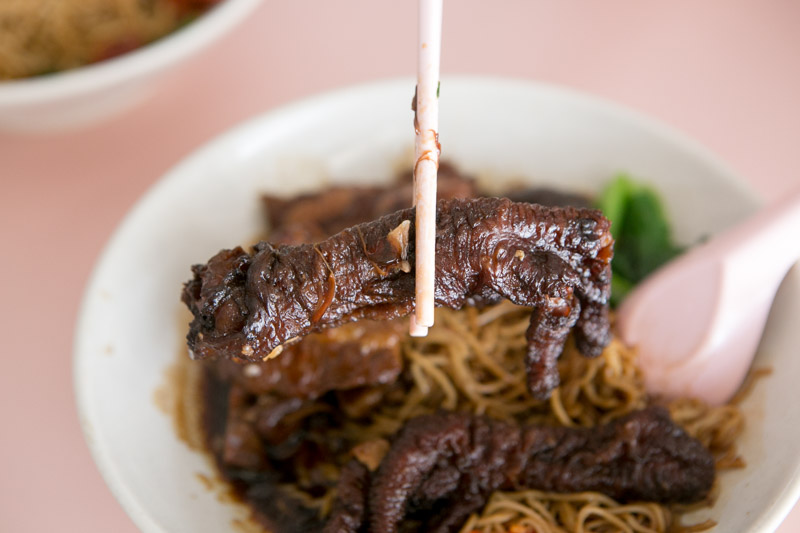 The braised chicken feet was an absolute joy to eat because of how soft and tender it was. I took my time to eat it, popping each joint in my mouth, chewing off the skin, and sucking on each bone.

The meat came off cleanly off each joint and I ended up sitting there for a good 10 to 15 minutes devouring the entire piece. 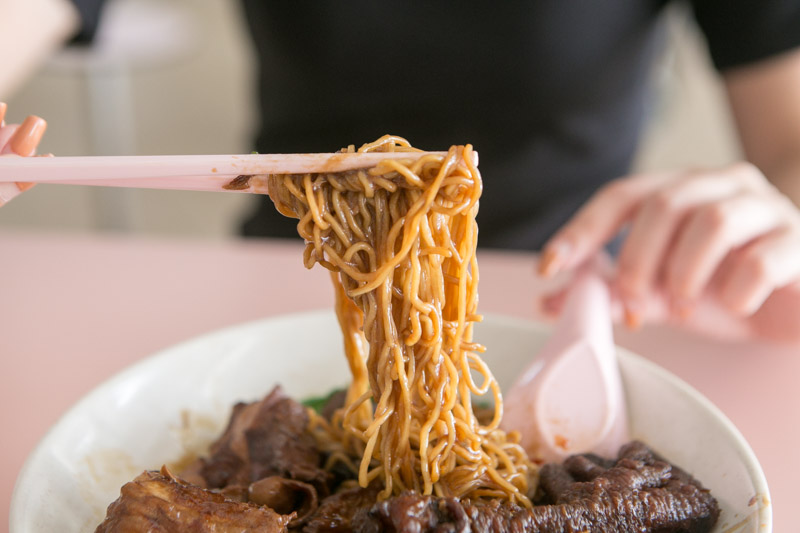 I got you mian with this bowl of noodles because I knew it’d soak up the braised pork gravy well, and I was right. By themselves, the noodles were light, but it became thick and heavy after soaking up all the gravy.

I loved how smoky, earthy, and savoury the gravy was. It was just as if I had doused the entire bowl with the characteristically sticky gravy that comes with braised pork belly, and my dining companion and I finished off the entire bowl of noodles with ease.

Whether you’re looking for a classic bowl of springy kolo mee or more unique and earthy flavours like Mushroom Noodle, Yummy Sarawak Kolo Mee has got you covered.

Plus, all the dishes are affordably priced from S$3 to S$5 and it comes in generous portions, so it’s definitely worth your money. It’s no wonder it has such a long queue no matter the time or day!