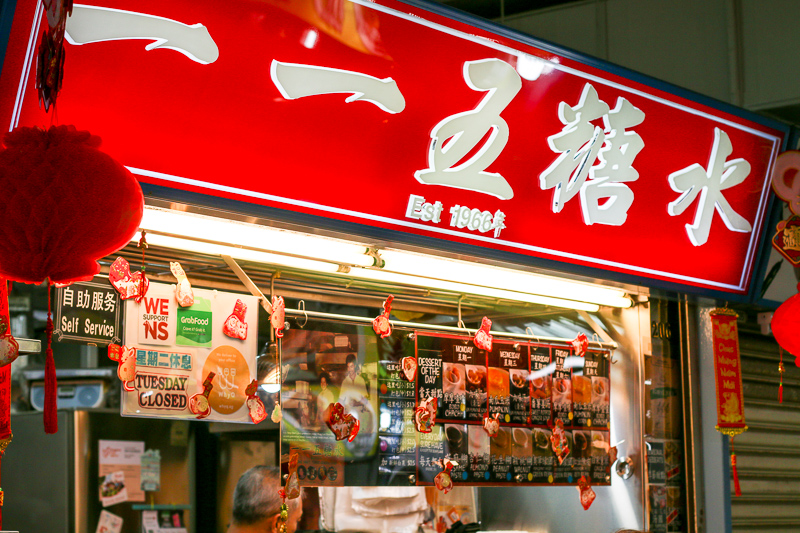 With the ever-changing trends in the food industry and more importantly the demand for cold desserts because of Singapore’s humid weather, it is quite a rarity to still see hawkers selling solely hot desserts.

However, at 115 Tangshui 一一五糖水 in Chinatown Complex Food Centre, hot desserts are the primary dishes they sell, and the stall has been around for the past 54 years. 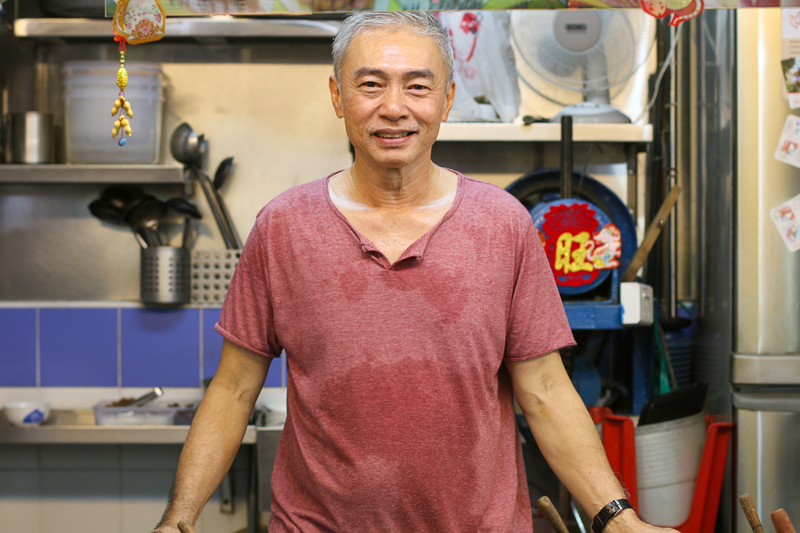 Mr Toh is the second-generation owner of this humble stall located at Chinatown Complex and has been handling the store for approximately 36 years. Prior to the relocation of 115 Tang Shui, Mr Toh’s mother was selling their delicious desserts on the roads of Temple Street for 18 years, from 1966 to 1984. 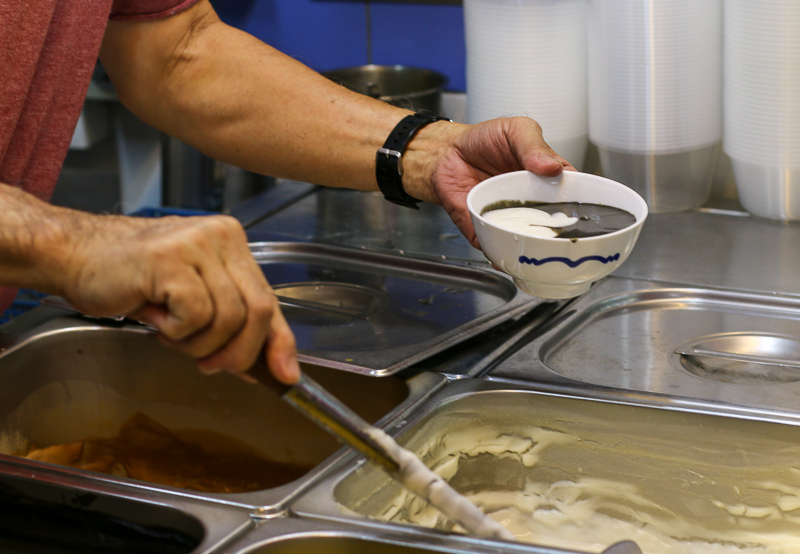 Mr Toh’s mother always had a specific way of whipping up her delicacies and Mr Toh has shared with me that even till this day, the recipes haven’t changed one bit. It was heartwarming to see how much Mr Toh takes pride in following in his mother’s footsteps. At 115 Tang Shui, you can find classics like Sesame Paste, Peanut Paste and many others. Depending on the day that you visit the stall, the desserts available will differ.

When I visited the stall, it was a Wednesday and the unique items available were the Pumpkin Corn and the Cheng Ting. 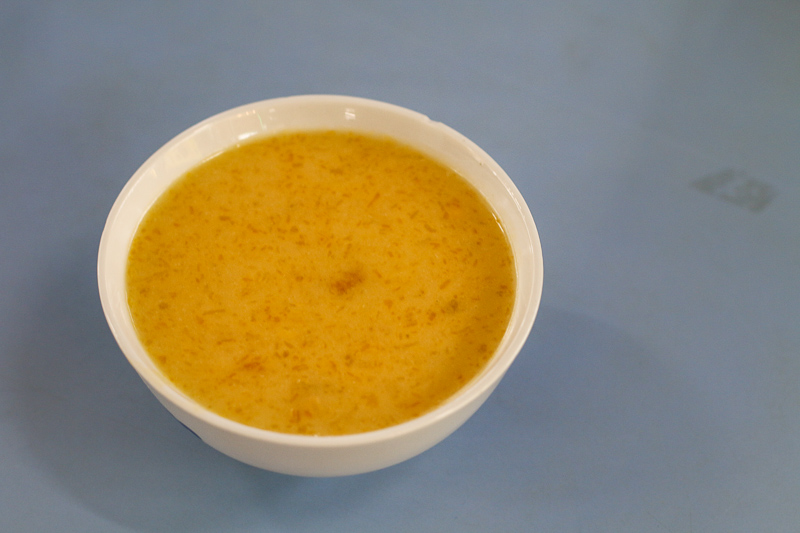 I decided to get the Pumpkin Corn (S$1.90/bowl) because I rarely have it as a dessert and was rather intrigued by the unusual combination of pumpkin and corn. I’m personally not a fan of pumpkin because of its occasional bitterness.

But the pumpkin used in this paste was absolutely wonderful, sweet with slightly earthy notes. The corn was the perfect pairing with the pumpkin, making it slightly sweeter with some slight crunch from the chopped up corn bits. Instead of the Cheng Teng, I settled for something more unusual—Fragrant Herb Green Bean (S$1.90/bowl). The soup is made with an extremely uncommon herb also known as “rue”. Mr Toh shared with me that the herb was rather widely used for hot desserts back in the day, but due to the increase in prices for this exotic herb, many have discontinued the usage.

However, at 115 Tang Shui, Mr Toh’s mother had insisted on keeping to traditions and have thus kept this dessert on the menu. 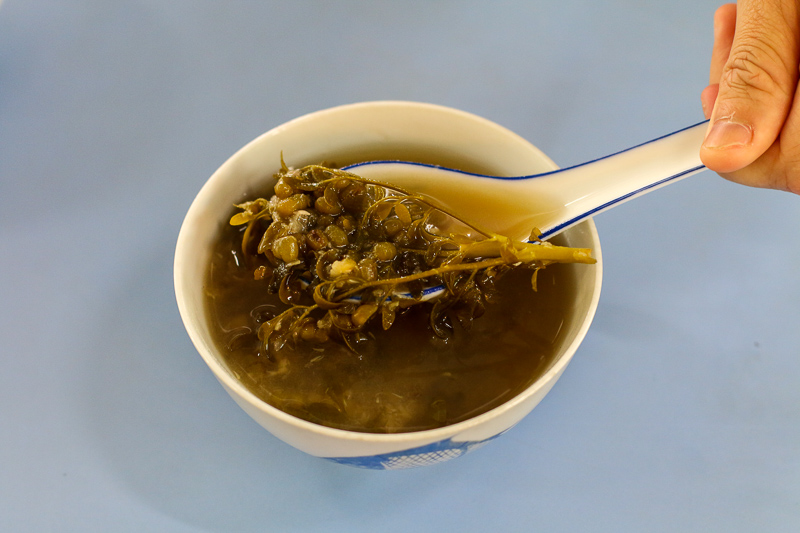 The rue herb is known for its detoxifying abilities and has a slightly bittersweet taste and aroma. The green beans helped to reduce the bitterness and added more sweetness to the soup.

I initially thought I wouldn’t like it due to the usage of herbs, but the soup turned out to be extremely light and easy to drink. If you feel like you wouldn’t be able to finish a whole bowl of one paste for yourself, you could consider getting a mixture of two pastes in one bowl, which was what I did. Here we have the Black Sesame Paste (S$1.70/bowl) and Walnut Paste (S$1.90/bowl). The hard work put into making the almond paste really does pay off and it shows in how smooth the consistency is. As for the Peanut Paste, the roasted peanuts made the paste extremely buttery and creamy.

Out of all the pastes, I think my favourite was the Sesame Paste. The effort put into each and every dessert is incredibly commendable and to see such trades die out would definitely be a pity.

Thankfully we can still look forward to the potential continuation of 115 Tang Shui as Mr Toh’s youngest son has picked up the tradition. Head down to get a taste of 115 Tang Shui’s sweet history!