Don’t you just love rojak, the sweet and piquant sauce that is oh so aromatic, mixed in with refreshing slices of fruits and topped with chopped nuts and some other surprises, which varies from store to store. Hands up if you’re with me on this one.

Rojak is a traditional messy mix of fruit and vegetable salad, found commonly in Malaysia, Singapore and Indonesia. There’s a couple versions including a red Indian rojak, but the typical style you’ll find in Singapore is sweet. comes with dough fritters, a salad mix and lathered with pungent black prawn paste.

For us Singaporeans, rojak is very common and most of us know the word ‘rojak’ literally means ‘mixture’ in Malay. So pretty much self-explanatory, I went on a hunt for the best spots for rojak in Singapore, where you definitely won’t get any mixed feelings about it, ha ha ha. 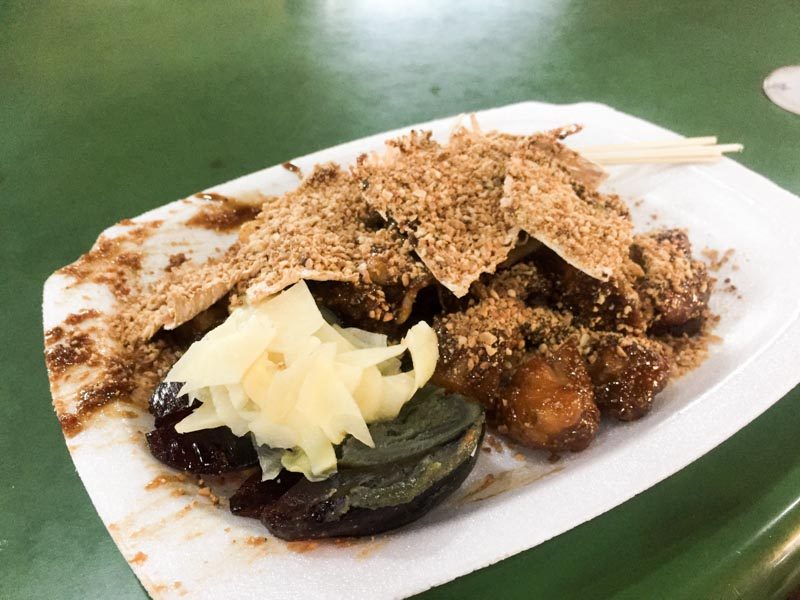 Prices start from $3 onwards, plate shown above is $6.

The only rojak store in Maxwell Food Centre, Rojak. Popiah & Cockle serves up a generous plate of rojak with a sauce that is intensely rich. The flavour is even more intesne with the addition of century egg, which has a distinct camp of supporters and naysayers. My only complaint is that the fried dough fritters (youtiao) aren’t as crispy as they can be, but still worth a try. 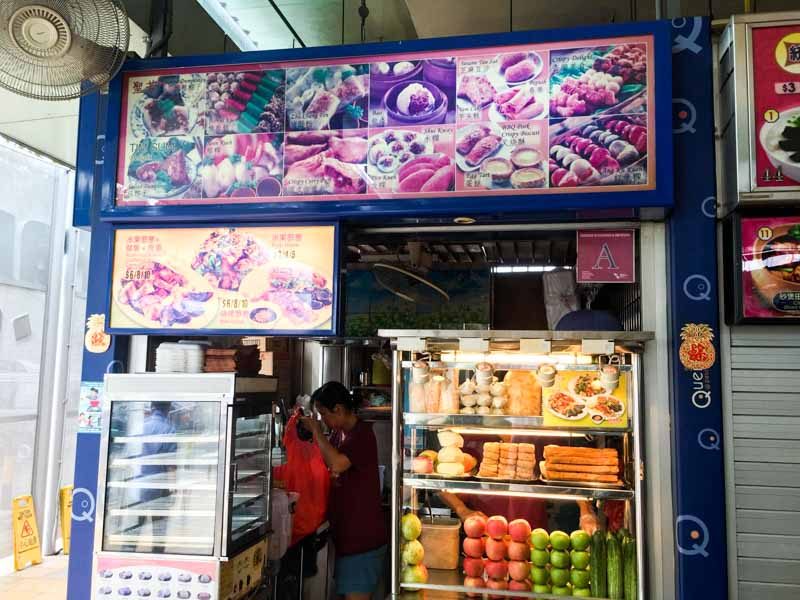 Prices start from$3, plate shown above is $3

The sauce for Shen Fang is savoury with a piquant end note, accompanied with crispy youtiao and made zesty with crunchy green mango slices. If you’re a fan of a lighter rojak sauce as opposed to the really goopy ones, then the rojak at Shen Fang will be a good choice. 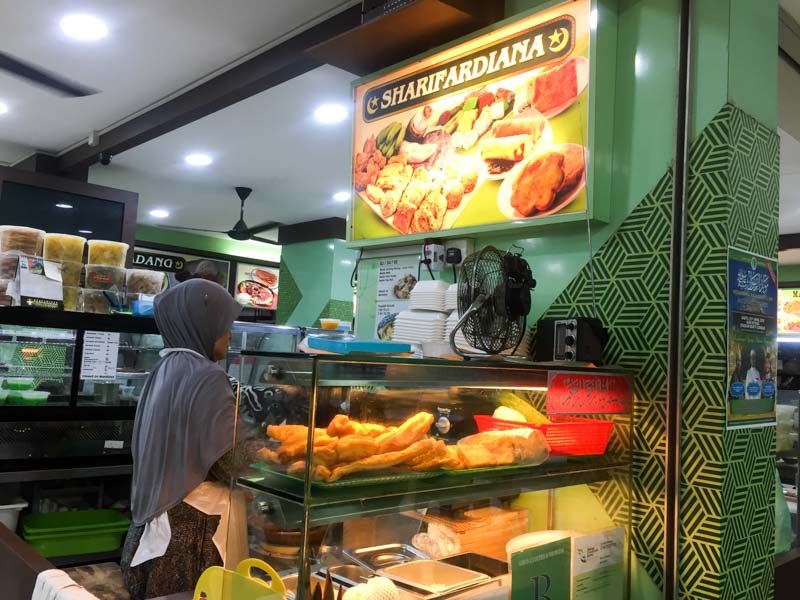 Starts from $4 onwards, plate shown above is $5.

I chanced upon this little rojak stand at Bukit Batok West Ave 6, and am absolutely glad that I did. An endearing makcik (malay aunty) would grill your desired ingredients and mix it in with the rojak blend. This caramelizes the sugar expecially in the fruits like pineapple and makes it all that more delicious.

The sauce is inclining towards salty and savoury with subtle sweetness, then finishes off with a little spicy kick. Do avoid eating the chilies though, because I did it and had a thousand regrets after. Portion is generous as well. 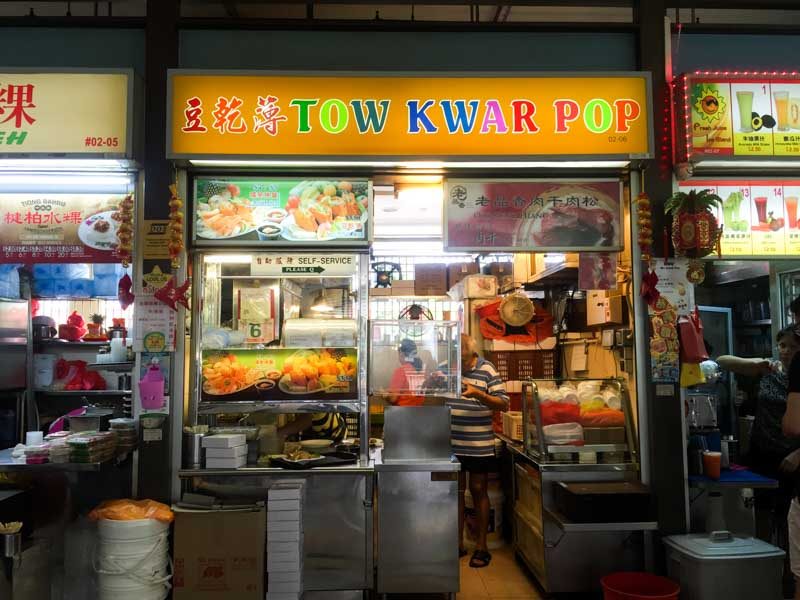 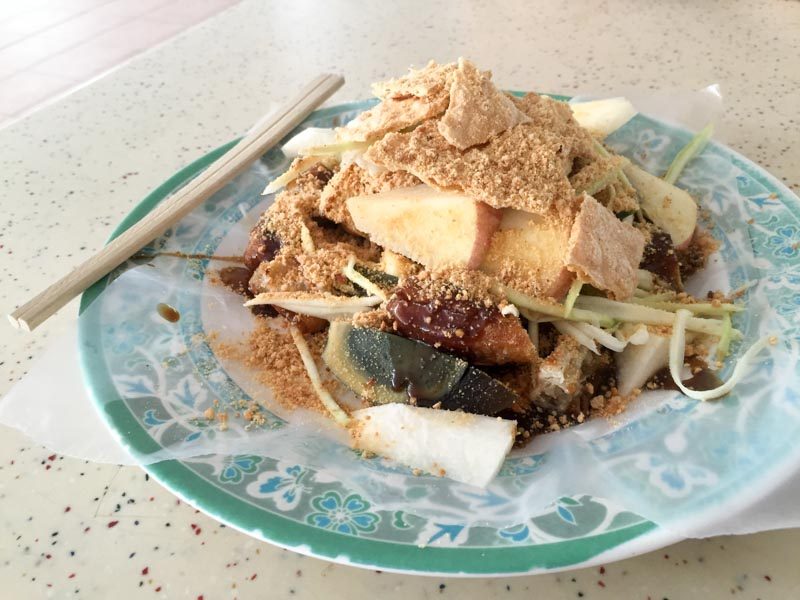 Price starts from $4 onwards,  plate shown above is $5.

With a decoratively cute signage, there’s no way you can ever miss Tow Kwar Pop in Tiong Bahru Market, on the second level where all the food lies. The tau kwa served here is still hand-grilled, I like how they stick to traditions and simply because of that, the tau kwa used in the rojak is phenomenal, albeit life changing.

Think airy and fluffy on the inside, charred fragrant and crispy on the outside. Sandwiched between are tow gheys (beansprouts) that adds textures and it helps in balancing out the heavy rojak sauce. Served with xue yu (cod fish) slices instead of cuttlefish because their supplier ran out of stock, there is an optional extra serving of sauce on the side as well for those who prefer a ‘wetter’ rojak.

One of the more nicely plated rojaks I’ve seen and served with chopsticks, making it easy to eat. The sauce was slightly cold and its saltier than usual, where one can vividly taste the prawn paste and not be overpowered by sugar. 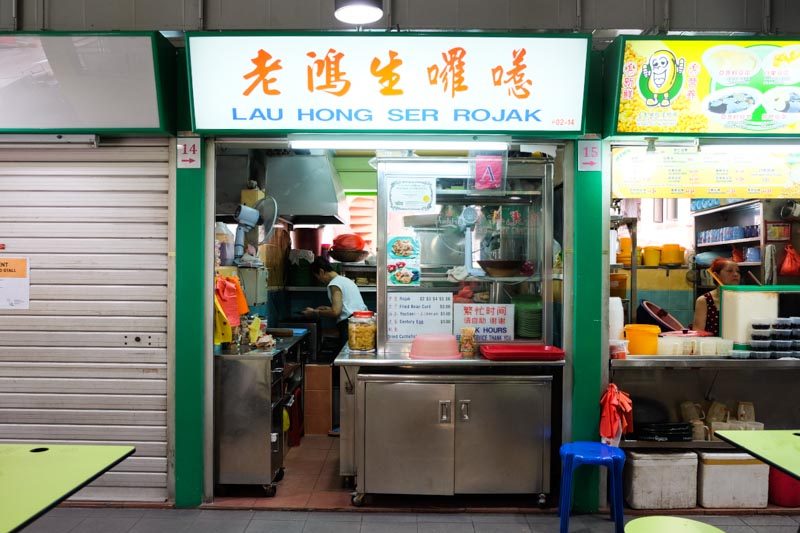 Price starts from $2 onwards, plate shown above is $6.

Lau Hong Ser Rojak at Dunman Road Food Centre is pretty popular. The stall only starts running from 5pm onwards and even then, orders are streaming in way before he starts. I got there 15 minutes after 5pm and had to wait a short while for my order (around 20 minutes). The wait can go up to an hour though if you come any later.

But that’s totally okay because good things are worth waiting for, besides, the stall uncle was excruciatingly sweet and kept apologising for the waiting time.

I like how Lau Hong Ser separates the grilled stuff from the plate of rojak and serves it with another bowl of sauce, so as to not have it soggy. This way, ingredients won’t be over-drenched and customers get to choose how saucy they want it. Pineapple slices are really fresh and the sauce is viscous, being a little bit on the spicier side. Do let him know if you’re not a big fan of spice. Known for having the crispiest youtiao that will change your life, Eat May Know’s rojak at Bendemeer promises to serve only the best accompaniments to your preferred plate of rojak. Alternatively, you can have it with a cup of soy milk but seriously, why not both? 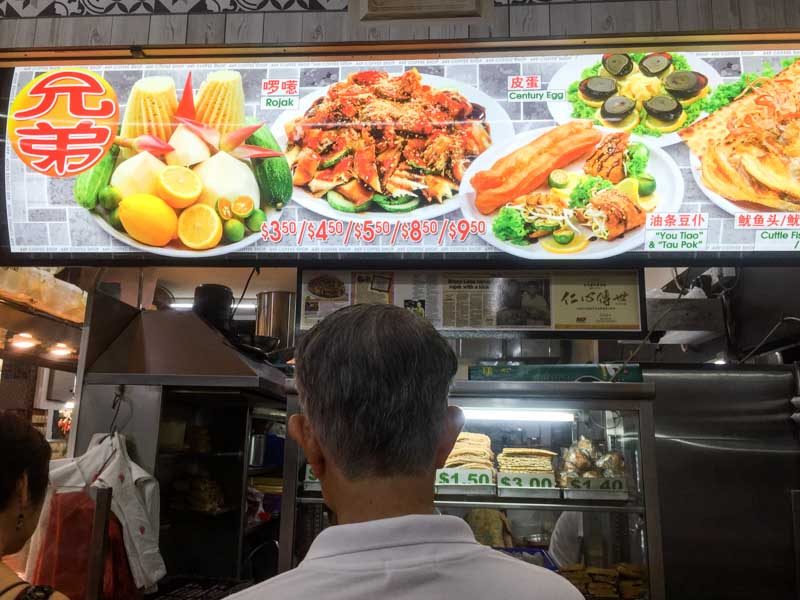 Well well, if it isn’t the famed Clementi Brothers Rojak that has got everyone salivating. And for good reasons because the rojak served here really does live up to its name. The tau kwa, together with the youtiao is roasted to a crisp and the sauce isn’t overly gelat.

It has this well-balanced sweet and savoury flavour that is brought to another level by the slight spiciness. The only down part? The queue can get quite long and the price is on the steeper side. But was it worth it? Definitely. 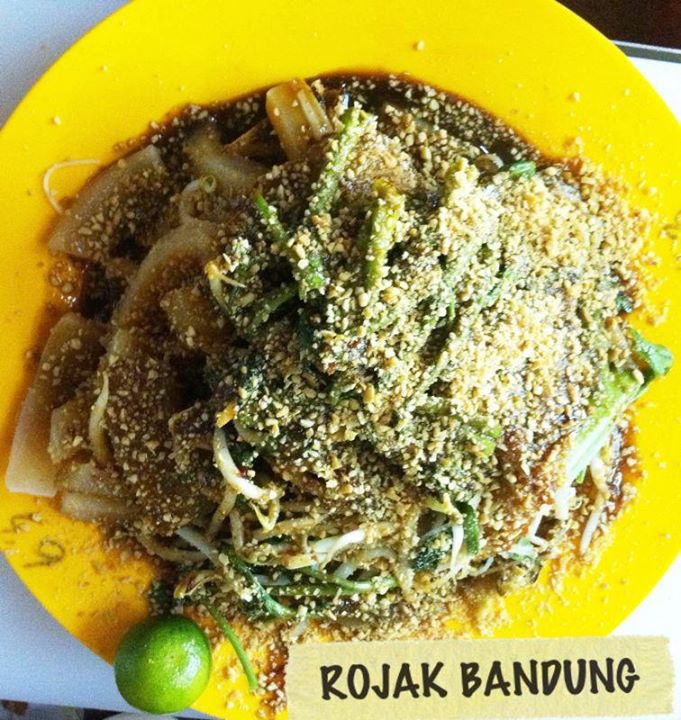 Power Rojak Bandung is nestled inside Ayer Rajah Food Centre, they’re usually open from 12pm but closing time varies. Do check out their Facebook page for updates before heading down as operationg days might be a bit fickler.

Showered with generous serving of peanuts and delectable sauce, Power Rojak Bandung is one rojak to try for the creatives out there who want something different. 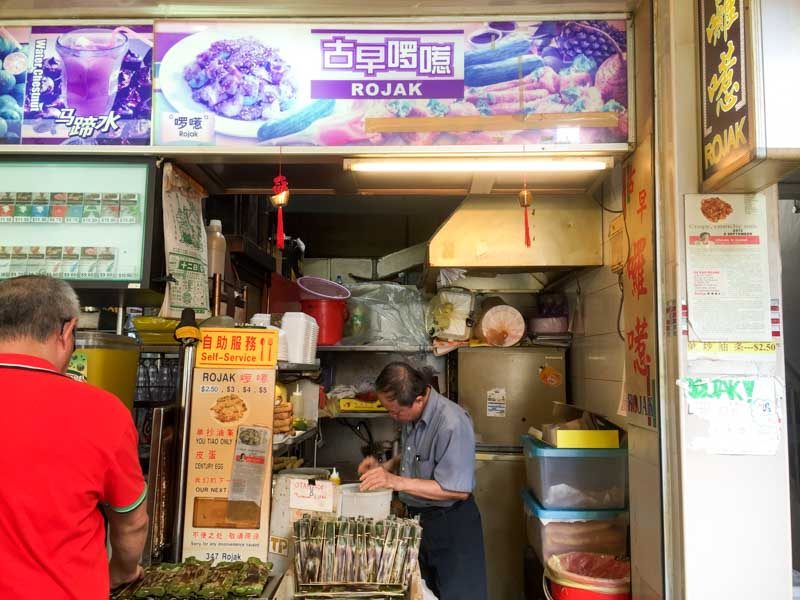 Located inside Ang Mo Kio Avenue 3 is Gu Zao Rojak, at Block 347’s Food House. And this extremely down to earth and unassuming little kiosk can be easily missed as it is placed right next to another rojak stand that boasts of bigger signages.

One of the cheaper rojaks I’ve seen and tried, it definitely doesn’t discount on the flavour though. In fact, it is one of the better ones I’ve tried. The youtiao is grilled till it’s golden brown and has a nice aroma, especially when combined with the rich sauce that has little bursts of coarse sugar granules. Unhealthy as it is, I’m a sucker for it.

Another thing worth mentioning is how all the ingredients are thoroughly mixed evenly, ensuring that everything is coated with a thin layer of sauce and that is just about the way I like my rojak. Starts from $3 onwards, plate shown above is $7.

Toa Payoh Rojak have implemented a system of getting a queue number to order and this how you know they are doing serious business. Previously located at HDB Hub, they’ve since moved and set up a store at Old Airport Road Food Centre.

The sauce is sweet, creamy and luscious with a concentrated prawn paste flavour. One interesting thing that they add into their rojaks is… spinach. I’ve never had spinach with my rojak before and was rather sceptical about it, only to remove all fears after trying it out because it really does work pretty well together.

The spinach helps to balance out the intensity of the sauce and gives an overall refreshing yet sweet experience. I really, really, really, like this rojak. Like really. 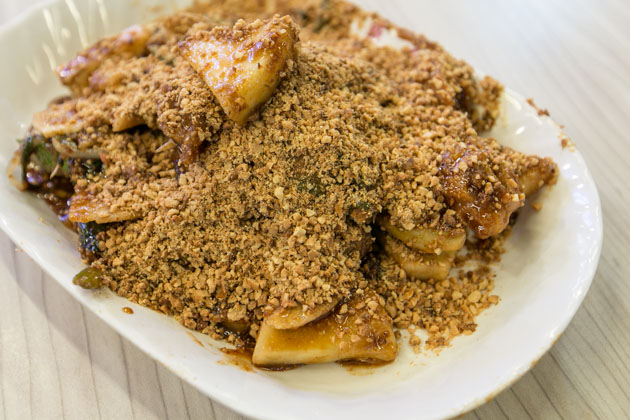 Every single time I walk into Gourmet Paradise in Toa Payoh, there is a snaking line for Soon Heng Rojak. Of course there will be a queue for things that are amazing and that’s what Soon Heng’s Rojak is. Heavily doused with loads of peanuts and slathered with an intense and heartening sauce, their rojak is definitely something you’d have to try for yourself.

The fruits and vegetables used are refreshing and complements the sweet sauce, giving a well-balanced flavour that will negate all queuing time. The toasted youtiao is crisp on the outside, mellow and fluffy on the inside, making it extremely addictive with the pungent yet fragrant sauce. 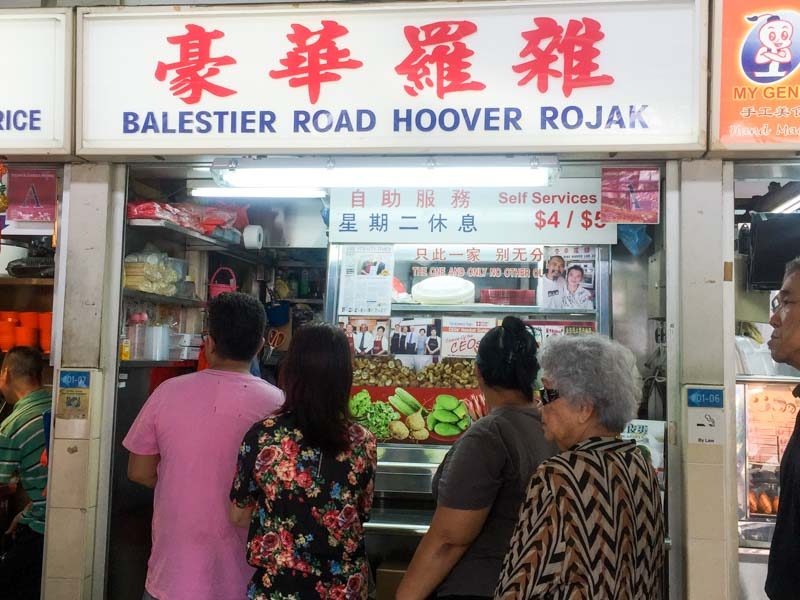 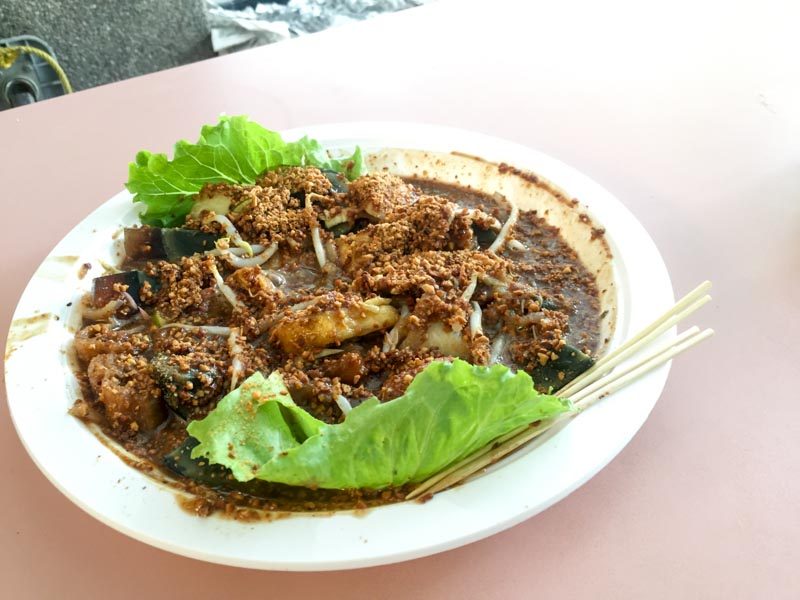 Starts from $4 onwards, plate shown above is $7

And finally we are here with Balestier Road Hoover Rojak, the critically acclaimed one. The queue was rather long (around 30 minutes) and by the time I got my rojak, I was all ready to delve into it and stuff myself silly. Hoover Rojak doesn’t use cuttlefish, instead they serve jellyfish in their rojak.

It’s no wonder people would queue for this, their sauce is definitely something else. It has julienned lime, which adds zest to the otherwise sweet and rich sauce. Coupled with the green mango slices, the special penang prawn sauce is now a blend of both sweet and tang, a match made in heaven. Complementing that is the fresh youtiao, fresh fruits and aromatic peanut shavings. Mmhm.