1933 Restaurant: The Past and Present Collide

Located just across from the Capitol Theatre, 1933 is not hard to find – right smack in the center of Capitol building, the restaurant is barely five minutes from the MRT. It adopts a rather chic retro feel, with a glass facade dining area on the second level.

1933 is the latest venture by the BreadTalk group. I am continually amazed by how they have managed to successfully diversify themselves across a variety of culinary styles; other F&B concepts like Bread Society, Toastbox and Palette are also under the corporation and wildly popular with many Singaporeans today.

I loved the kopi latte ($7) – a very clever idea to marry Western and local coffee. The result was a smooth texture, reflective of our local kopi, followed by an acidic hint at the end. The amount of milk was sufficient, not too much that it overshadows the taste of the Mexican coffee beans, yet enough to sweeten the drink.

Have this when it’s still hot, the contrasts in flavour are not as strong once it turns cold. I’ll definitely be back for the coffee.

As a starter, the Sawadee Greens ($14.80) was very impressive. Heck, I would even have this as a main course. This was a play on sweet, sour and spicy. Each worked in tandem to balance the other out; sweet from the dressing to distract from the spiciness of the tom yum powder, and sour from the lime to mask the excessive sweetness.

It was a good choice to have this first to tempt our palate for the remainder of the meal. I would definitely recommend ordering this on your first visit.

The 1933 Power Carrot ($9.60) was carrot soup served in a bread bowl. What I liked was how the bread in the bowl was so moist and yet able to hold its shape, not something you normally get for just $9.60. The use of a thinner soup like carrot instead of pumpkin/mushroom catered to diners like me with a preference for lighter dishes.

The soup was smooth with fine carrot shavings. I loved how they managed to harvest the sweetness of the carrots without that smelly bitter aftertaste. However, I was a tiny bit disappointed that colouring was used to enhance the appearance of the dish as the soup appeared unnaturally orange.

Also part of their bread bowl series, the Nanyang Curry Chicken ($14.90) is one of 1933’s signatures. With Toastbox already serving curry chicken, I was concerned if both versions would end up tasting the same.

Toastbox’s version happens to be sweetened with coconut milk while 1933’s version has a stronger emphasis on the spices; spoonfuls of curry that tasted like pepper with just a hint of coconut milk at the end.

I like how 1933 has a niche in continually creating dips/sauces with multiple dimensions to them. Their Grilled Pork Loin ($28.90) was very indicative of that. Served with asparagus, roasted potatoes and cherry tomatoes on the side, what made this dish exceptional was the Hainanese sauce that you can choose to have with mushroom or black pepper.

The Hainanese sauce comes off similar to a sweet bean sauce, the one routinely served with Peking Duck; just a bit toned down and less sweet. It was ingenious to adopt this sauce so the sweet bean would not mask the taste of the meat and seasoning invested into the dish.

The smell of bay leaves and thyme still shone through, making the grilled pork loin my favourite dish of the night.

The last of the mains that we sampled was the Hainanese Kampong Chicken Rice ($16.80). Admittedly nothing too fancy, it was simple cold cut chicken with jasmine rice, sufficiently flavoured in chicken stock.

The hallmark of a good chicken rice starts with the rice being good enough to eat on its own and this one definitely was. The dish even came with freshly ground ginger on the side for contrast with the rice and chicken.

I’ve heard that others didn’t have a very good impression of the chicken rice though, perhaps consistency might be an issue.

For dessert, we had the Gula Melaka Pandan cake ($8.90). It was a very innovative concept, attempting to put a modern twist on the chiffon pandan cake.

I found the flavours rather conflicting though, where the taste of pandan was overshadowed by the heavy whip cream and gula melaka. The concept to this dessert was good but the constituents lacked cohesion. 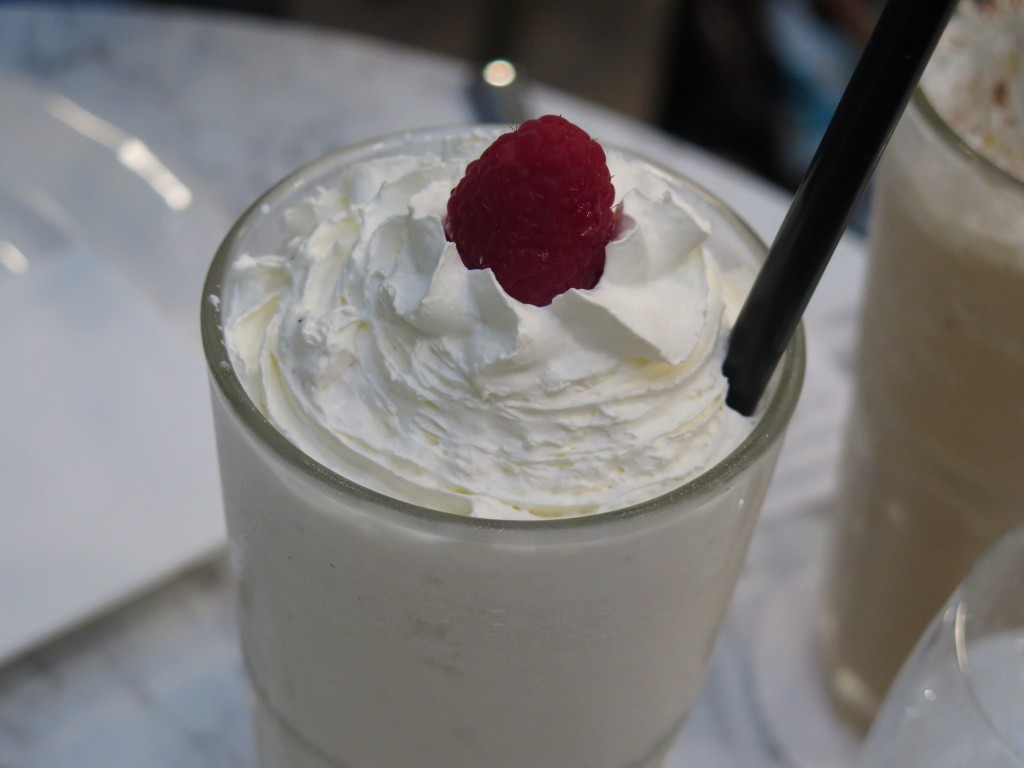 You can consider having one of their signature milkshakes as a dessert too. Out of the four flavours available, I liked the coffee milkshake best. Instead of the usual espresso taste, the coffee has more of a kopi character.

In terms of culinary range, the restaurant tries to sell food that is reminiscent of the 1930s, mostly Anglo-Chinese, Hainanese food and local favourites. They stay true to the authentic traditional taste by making minor adjustments, serving the Nanyang curry in a bread bowl or adding a Hainanese sauce to a Western pork loin. Very simple tweaks that produced amazing results in terms of flavour.

While it may be located in the upmarket Capitol building, the price range is still pretty reasonable with mains that range from $15 to $20. Plus, if you pop by on weekdays, some of their selected mains (fish and chips, cordon bleu, Nanyang curry or Hainanese chicken rice) and a drink go at only $19.33++.