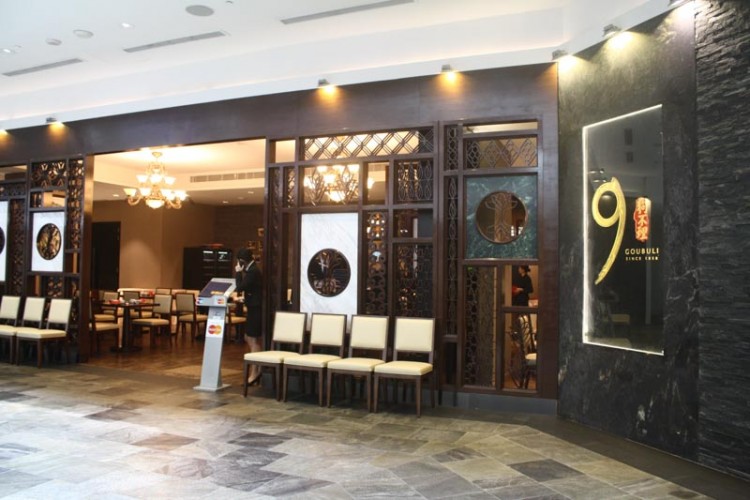 Residing amidst the high flyers of Marina Bay Sands, 9Goubouli still manages to maintain a humbled but distinguished air around it. Translated from 狗不理 (gou bu li) in chinese, the famous establishment dates all the way back to 1858 in Tianjin, China, where it became so popular that its inventor, Gouzi [狗子] which can also mean dog, became too busy to engage in small talk and people started calling him Goubuli 狗不理, or dog ignores. 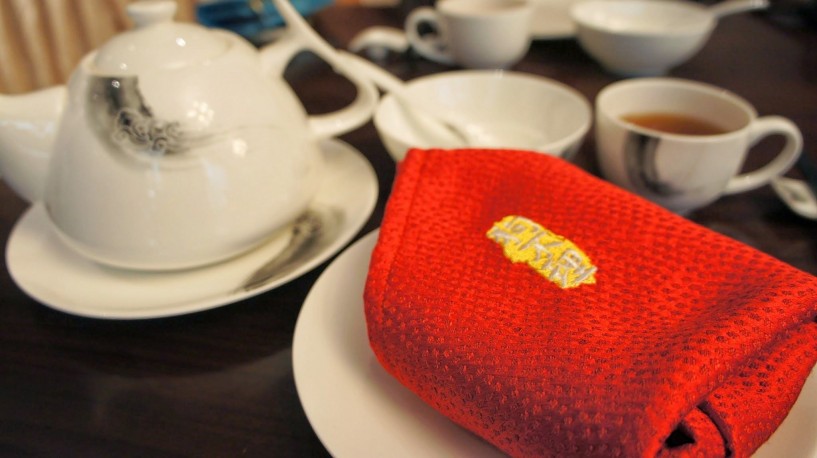 With its rich history backing its base, we were more than excited to try their menu today. We tried their famed Goubuli Bun with Meat Filling ($2.20/bun) and the Goubuli Buns with Wagyu and Vegetables Filling ($3.50/bun). Sad to say, their original meat filling bun was a tad disappointing, and did not bring out enough flavour and soupiness as I would have liked. 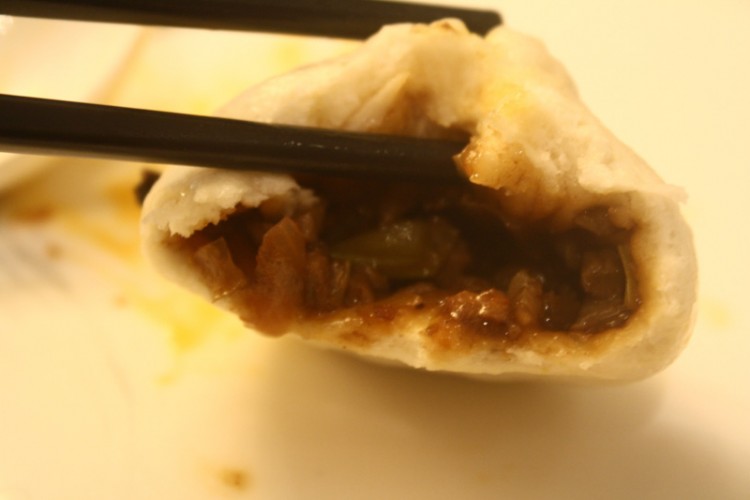 However, the bun itself was springy and light, carrying a chewy texture that I liked very much. On the other hand, I loved the bun with Wagyu and Vegetable Fillings. The meat was tasty and tender, and one bite into the bun fills your mouth with a generous amount of filling just right to satisfy your tastebuds. For appetisers, we tried their Steamed Chicken with Szechuan Chilli Sauce ($12). A cold dish, it was pretty refreshing, and the chicken was tender with a distinct firm bite. Along with a layer of cold jellied fats, and accompanied by a slightly spicy yet tangy szechuan sauce, it proved to be one of our favourites here. 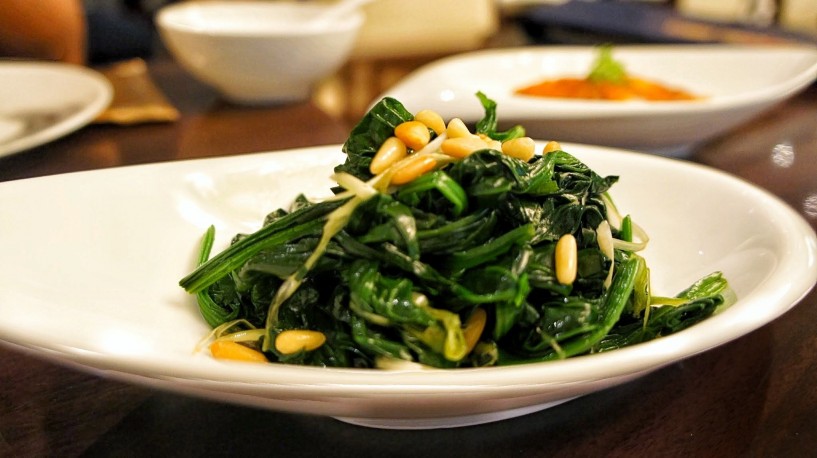 Spinach with Pine Nuts ($8). Although cooked well, this dish was slightly too salty for us, such that it tended to overpower the original taste of the spinach itself, instead of complimenting it. Shanghainese Wontons in Red Oil Vinegar ($6.50). A pretty standard dish, it sat well with our palates, being not too strong in its taste, carrying just a slight spicy note with it. The vegetable stuffing was quite filling and sufficiently satisfying. Teapot Soup of the Day ($12). Varying on different days, this dish would still certainly carry its unique spin, with its contents double boiled in a small teapot. We loved the whole idea, and apart from its novelty, the robust and tasty flavours of the soup; maybe only achieved by boiling it in the teapot. 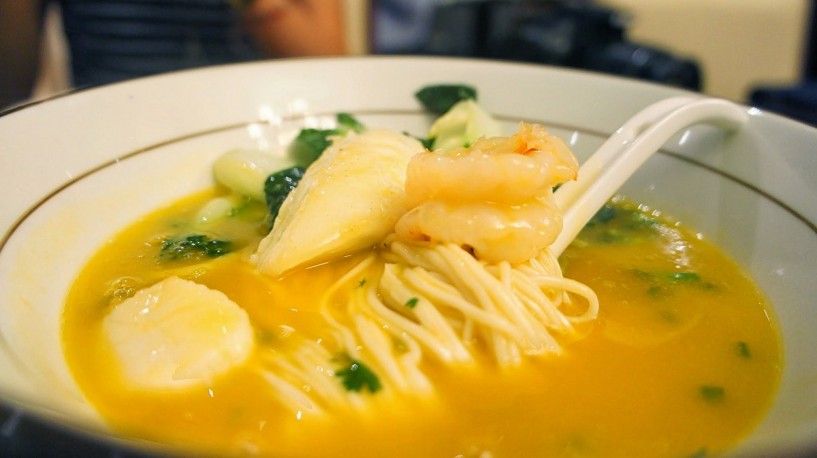 Handmade noodles in Seafood Soup ($12).The soup base was thick and pretty flavourful, carrying notes of egg yolk and milk in it. Paired with springy homemade noodles and fresh seafood, this was a simple yet fulfilling dish by itself. However, I would certainly have liked it better if it wasn’t as thick, leaning towards more of a soup base rather than its original gravy-like texture. 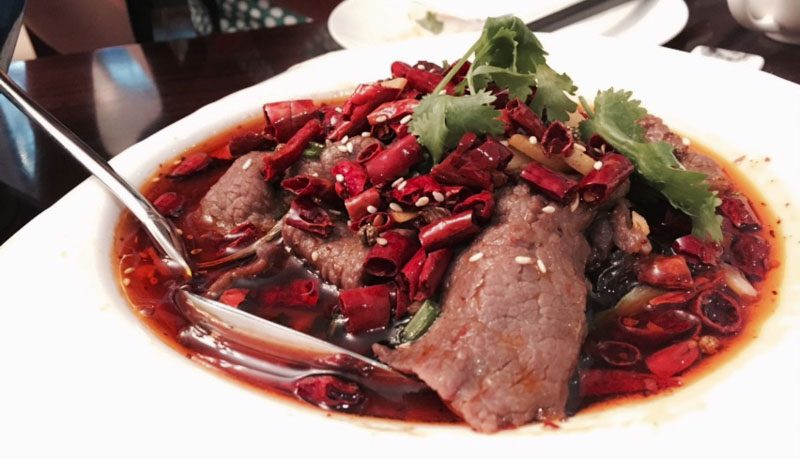 One of the more unique dishes here at 9Goubuli, the Szechuan Style Poached Sliced Beef ($22; small) was indeed a pleasant surprise. Upon my initial glance, I thought it would be too spicy for my liking, with so much chilli slices and szechuan peppers dotting the scene. However, this dish really impressed me.

Admittedly, it was spicy, but not as overbearing as I would have expected it to be, complimenting the tender and springy beef slices really well. The highlight of this dish however, were how tasty the beef slices were on its own. They subtly carried the flavours of the Szechuan sauce, but still managed to retain their original flavours. Pan-fried Cod Fish in Special Sauce ($16/piece). The Cod retained its original flavour, and was soft to the bite. The outer layer held a firmer texture, with it pan-fried at the sides. Admittedly, it was still pretty average, but still well-executed, and I would recommend it to any fish lovers out there. Mango Pudding with Compote, Sago & Coconut Sorbet ($12). Tending towards the sweeter side, the coconut sorbet managed to balance the sweetness out, with its refreshing taste and texture. However, the mango pudding still had a mildly artificial taste, and let’s just say, I have certainly tasted better ones out there. 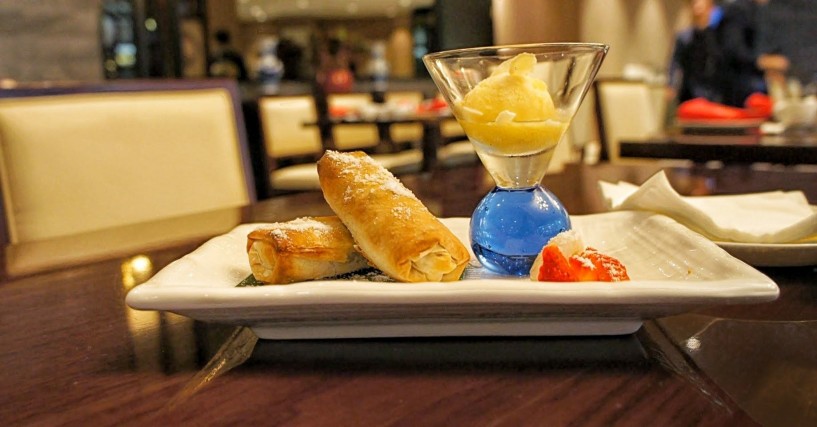 An interesting dessert that I have yet to seen, their Chocolate Banana Filo Spring Roll made with Almond Custard & Passion Fruit Banana Sorbet ($14) was pretty much a delight to our tastebuds.

What could ever go wrong with chocolate banana? A slight almond custard flavour was in the mix too, and even though I found it a little unnecessary, it managed to not undermine the flavours of the dish. Wrapped with fluffy and crisp filo pastry, I liked this unique dessert of theirs.

Passion Fruit sorbet was added on the side too. Although the mix of different flavours were mildly intriguing and a little over-the-top, they still manage to complement each other pretty well per say. 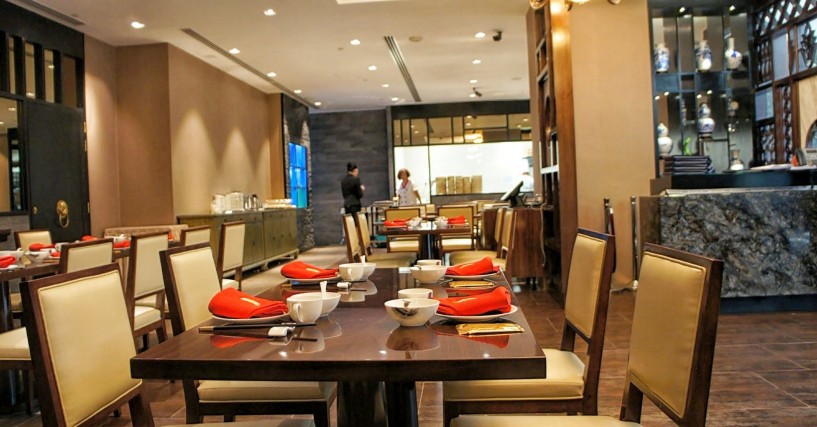 Overall, 9Goubuli proves to be a rather good destination for just a casual dinner amongst the Shoppes @ Marina Bay. If you’re craving for something simple and semi-easy on the wallet, 9Goubuli offers pretty affordable fare for a restaurant here at the shoppes, with food of good standard too.

9Goubuli does not stand out per say, and I feel it would fit better in a location other than at MBS. The signature bun also proved not as outstanding as the other dishes served. But if you’re around the area and just craving for some Chinese Sze Chuan food, why not head over to 9Goubuli.