It seems like my journey to uncover the best mee rebus in town starts anew with my lunch at Yunos N Family, which is located at 724 Ang Mo Kio Avenue 6. Like almost all renowned Malay stalls, Yunos N Family has been around, since 1965 to be exact, and yes this particular year was also the year Singapore gained independence.

Fun fact: Actor and TV personality, Gurmit Singh wasn’t even a year old when Yunos N Family was around. 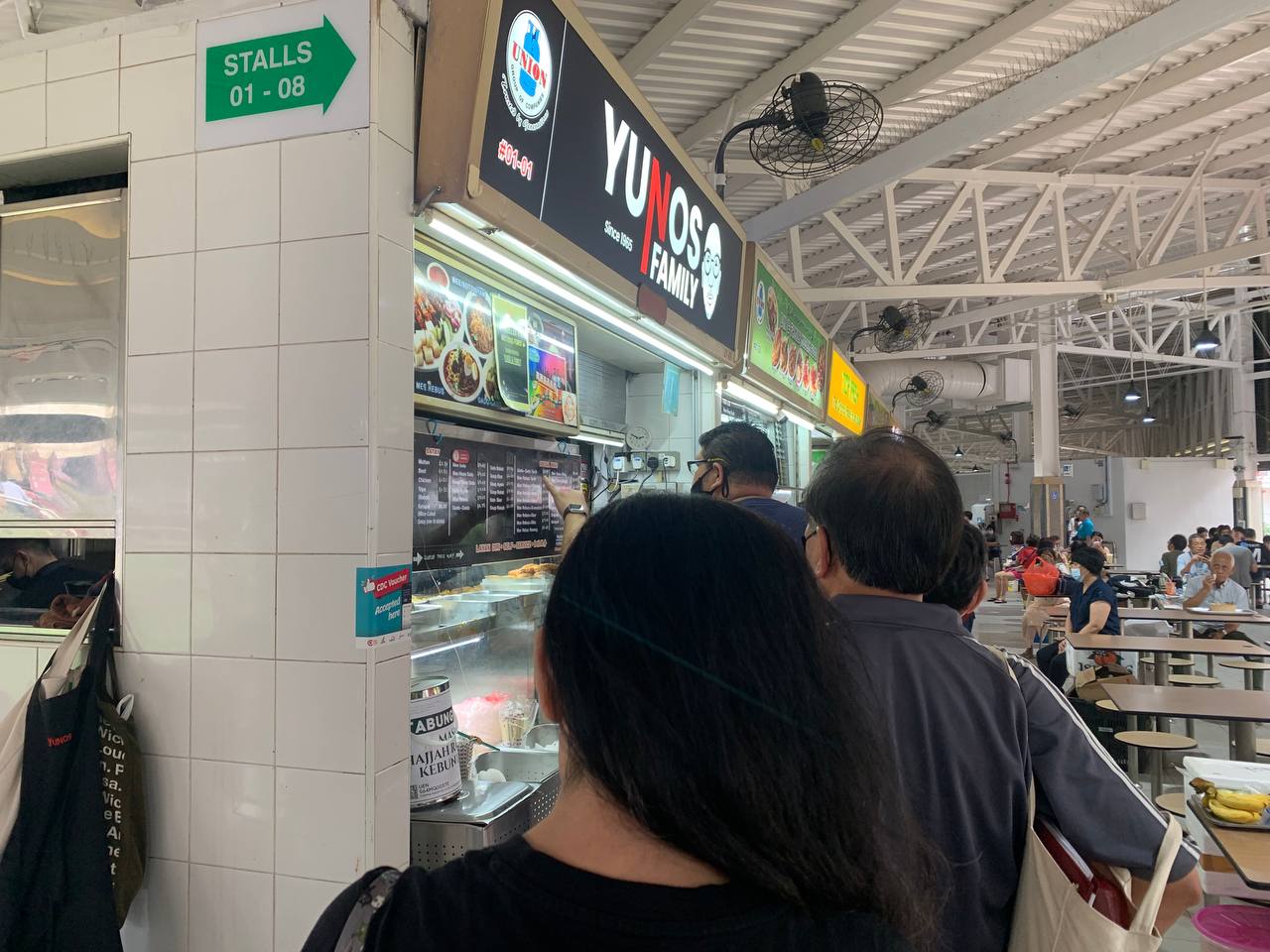 Yunos N Family was started by the late Haji Yunos Ahmad as a push cart stall at Hastings Road selling, you guessed it, mee rebus. His legacy is kept alive by his son, grandson, and a handful of relatives. Blood is definitely thicker than mee rebus gravy.

Haji Yunos was of Javanese origins which meant that his recipes tend to lean on the sweeter side and also require a prep time as early as 6am!

What I tried at Yunos N Family Though Yunos N Family may tell a similar story of a particular cuisine’s heritage, it doesn’t fall into the same trope of having a limited menu that hasn’t been touched for decades. Yunos N Family offers probably the most extensive mee rebus and mee soto options on the island.

Equally stellar were the choices available for mee soto, with options such as Mee Soto Dinosaur (S$5.50) which was served with all bony parts of the chicken, such as the neck and rib cage. One of its highlights apart from its noodle offerings is the classic Indonesian dish, Gado – Gado (S$4.50).

I haven’t even scratched the surface of the menu, as it also has freshly grilled satays with flavours like Mutton, Beef, Chicken and Tripe all costing S$0.80 per stick (min 10 sticks). Rounding off the menu are several soup dishes such as Soup Ayam (S$4.50) and Soup Ekor (oxtail) (S$6). I went ahead with Mee Rebus Ribs (S$7) and an order of Satay (S$8) with both Chicken and Mutton. There’s not much to fault in terms of presentation. The Mee Rebus Ribs looked very much like your typical mee rebus. The rich brown sauce is topped with chopped green chilli, fried shallots, small slices of fried tofu and a boiled egg, submerged in gravy. Similarly, the ribs shared the same fate as the egg. You can’t blame me for going straight for the ribs, which required some digging through the yellow noodles and viscous gravy. And it was worth it! The ribs were really cooked really well and were bone-sliding tender. It wasn’t really seasoned, with most of its flavours coming from the gravy.

What came through was the gameness of the meat, which I felt was just right (though my tolerance for gameness is quite high). You also get around four pieces of ribs which was fair for the additional S$3 compared to the basic Mee Rebus. 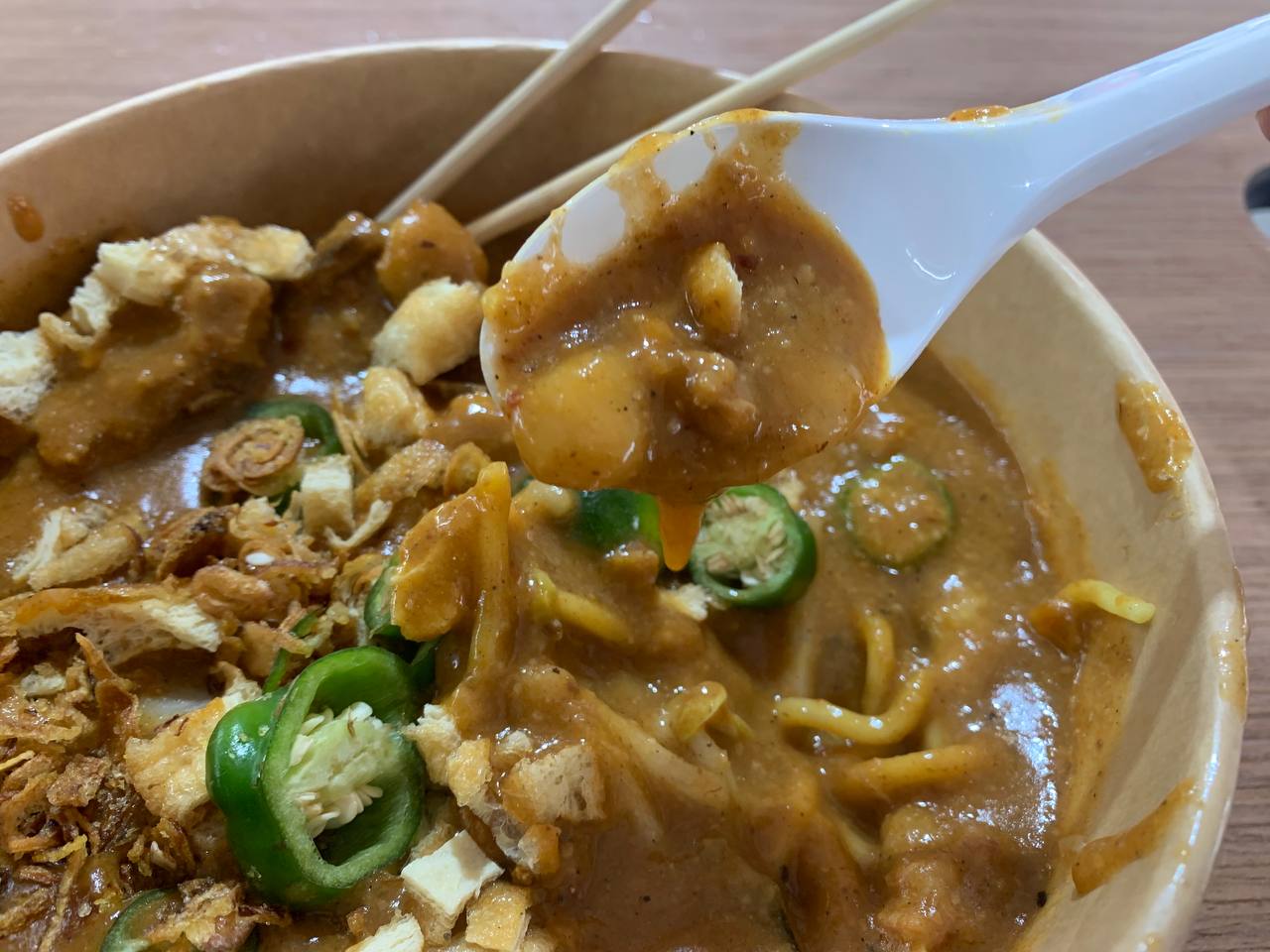 Onto the main star of the show, the gravy. I thought it tasted more subtle than your average mee rebus. There weren’t any prominent sweet or spicy flavours that you usually get. Even the signature nuttiness was subdued, though it didn’t stifle any enjoyment when paired with the chewy yellow noodles.

Having said that, the gravy was still as condensed as ever, which made me wonder if the watered-down taste was intentional. Unfortunately, the sides seem to have taken a step back from contributing to the flavours. The beansprouts were intermixed with the noodles and didn’t have the crunch that I was seeking. Similarly, I felt that the fried tofu was sliced too thinly, which made them blend with the gravy, eliminating any possibility of another chewy texture.

At least the chopped chilli provided some form of heat and the boiled egg tasted as it should. I did enjoy the addition of fried shallots (which wasn’t the norm) as it added a modest amount of savoury flavour. Finally, it was on to the Satay. I realised that my Satay order took longer than my Mee Rebus, which was understandable as they were grilled to order on a mini-satay griller. There was the option of adding Ketupat (rice cake) for S$0.50 but after the carbs and gravy I had earlier, I opted not to. I really enjoyed the Chicken Satay as it reminded me of the one I had at Satay Sumang at Canberra. It had just the right amount of chew whilst not being dry. Subtlety might be the theme of my lunch, as the flavours only hinted at cumin with some sweetness to it. I do appreciate the charred taste that was apparent. Sadly, the Mutton Satay didn’t fare as well, as it was chewier and drier. It also was alarmingly sweet (maybe this was based on a Javanese recipe?) and was definitely the weaker link. I found the satay sauce to be watered down as well, with no strong peanut flavours.

It probably wasn’t such a bad thing as the Mee Rebus was already rich as it is. In fact, I don’t think I’d recommend ordering both dishes, especially when eating alone. Yunos N Family might be lacking in strong flavours but its richness was still there. Despite my comments, I didn’t think I had a bad lunch. I actually enjoyed it despite the apparent lack of flavours. Though looking back, I think it was just me who expected profound flavours as the row of people queuing in front of Yunos N Family didn’t stop even after I finished my meal. They probably knew better than me.

This is a definite must-try, especially for all mee rebus fanatics. May your road lead you to warm mee rebus!