If you venture deep into the food centre in Chinatown Complex, you will find Babas Peranakan hidden within the blue zone. Despite being located in a considerably ulu part of the food centre, you can easily identify Babas Peranakan through its striking red signboard and the crowd that often forms in front of it. Babas Peranakan is helmed by Mr Edwin Tan, who was a hotel chef at high-end hotels like Shangri-La and Raffles Hotel for 20 years. When he was 51 years old, Mr Tan made the decision to open his chap chye png hawker stall, where the options are all authentic Nyonya dishes. Babas Peranakan has gained popularity for its affordable array of Nyonya dishes, like its Fried Chicken (S$3), Sayur Lemak (S$1) and Chap Chye (S$1). When I arrived at the stall around 12pm on a Thursday afternoon, I was greeted by a small queue around the relatively secluded stall, which boasted a selection of ingredients that prominently featured curry. 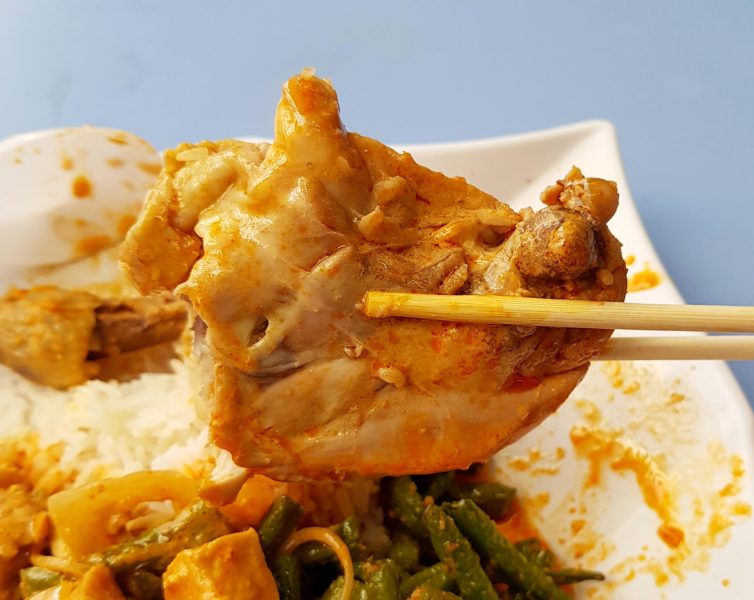 The first ingredient I tried was the Curry Chicken. I was pleasantly surprised that I was given an entire chicken leg, as most other chap chye png stalls I’ve patronised serve their curry chicken in smaller chopped pieces. 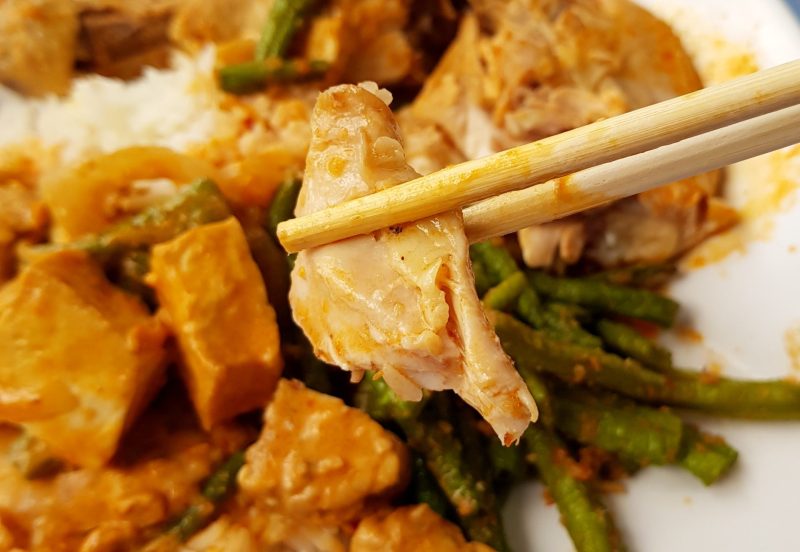 The chicken leg was extremely tender and soft. The chicken meat was not dry at all and slid off the bone easily. Though S$3 for a chap chye png ingredient is on the pricier end, I’d consider the price well justified based on the huge size of the entire leg and generosity of the meat. While the chicken leg on its own was fantastic, the Nyonya curry elevated the dish to a whole new level. Babas Paranakan’s curry had a bright golden-orange hue and its consistency was on the watery side. However, despite it not being as thick as other curries, it did not taste diluted at all. Rather, it had a rich and complex flavour with a very strong coconut milk aroma.

The spice level of the curry was pretty mild, but still had a tiny fiery kick to it. All in all, the lovely combination of the savoury, sweet and spicy profiles of the curry added an extra punch of flavour to the entire dish.

Babas Peranakan’s curry has got to be one of the most delicious and fragrant curries I’ve ever had. Though it looked like any other normal curry at first, I was blown away by the richness of the spices and the flavours. Next, I had the Beancurd, which was similarly doused in curry like the Curry Chicken.

The beancurd itself was rather average. Like most other beancurd dishes, it was rather firm and springy with a slightly salty and neutral taste. However, it being cooked in aromatic curry did make it a lot more flavourful. Finally, I tried the Stir Fried Long Beans, which caught my attention due to their bright green colour that stood out among all the orange dishes.

The long beans tasted starkly different from the Curry Chicken and Beancurd as it was cooked with sambal instead of curry. The sambal bits stuck on to the sides of the long beans, and had a pretty strong, savoury taste of shrimp.

Texturally, the long beans were rather soft and slightly mushy. Personally, I prefer crunchier long beans, so Babas Peranakan’s version of this dish didn’t exactly blow me away. However, I enjoyed the contrast in flavour between the sambal on the long beans and the curry.

Although the items that I tried in my plate of chap chye png were relatively simple, the rich flavours and cheap prices made my meal extra satisfying and comforting. 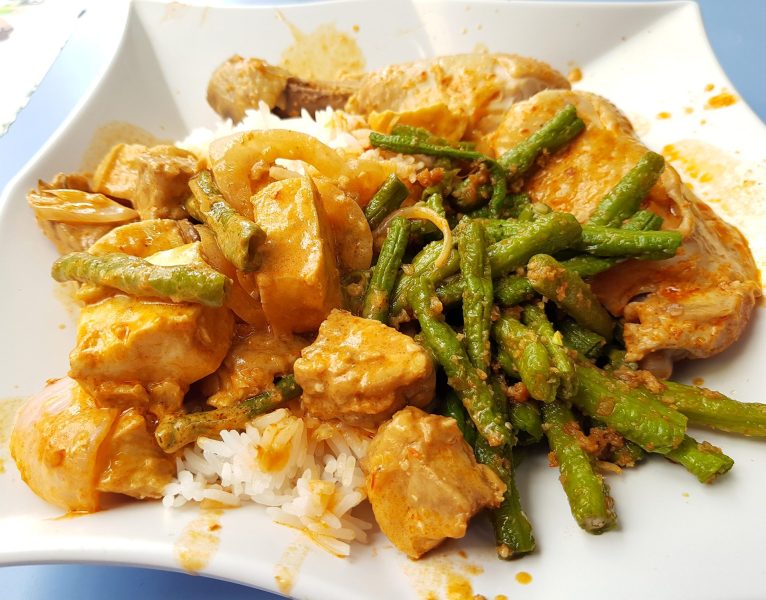 With its incredibly flavourful Nyonya chap chye png options at a delightfully affordable price, it’s no wonder that Babas Peranakan is so popular. My favourite element of my meal was definitely the curry. With its full-bodied, gorgeous aroma and rich milkiness, Babas Peranakan’s curry dishes are a must try.

While I normally don’t pay much attention to chap chye png stalls in hawker centres, I can safely say that I would travel all the way down to Chinatown again just for another taste of Mr Tan’s superb dishes.