Botanico: A Contemporary Bistro Set Within The Lush Beauty Of Botanic Gardens Singapore 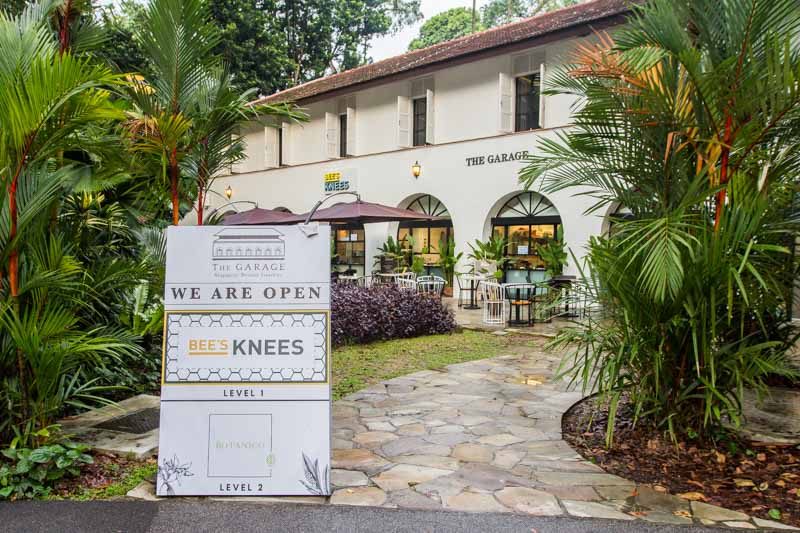 I recently heard of The Garage opening at Botanic Gardens Singapore, and I was intrigued by the two dining concept idea it has to offer — the first level is occupied by Bee’s Knees, a cafe-concept; while Botanico, a bistro-concept takes up the second floor.

Botanico resides within a white colonial building with a long history that comes with it, and it is easily accessible by car or a short five minutes walk from Botanic Gardens MRT station.

It aims to utilise natural produce and offers a seasonally driven menu; this means that head chef Sujatha Asokan‘s menu is subject to constant change as she obtains better, fresher produce depending on the season. 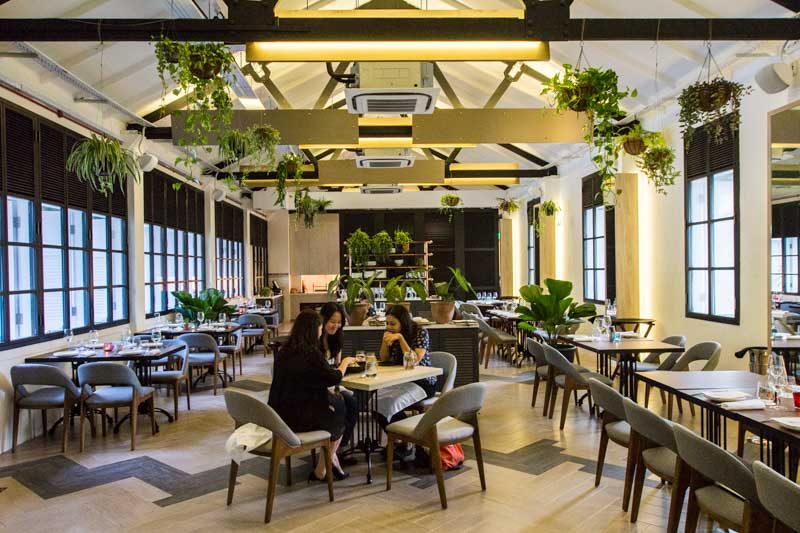 Plenty of thought went into the design of Botanico, with an emphasis being placed on conserving the original rafters and window shutters throughout the renovation. This gives the bistro a clean modern look, while retaining its old charm. 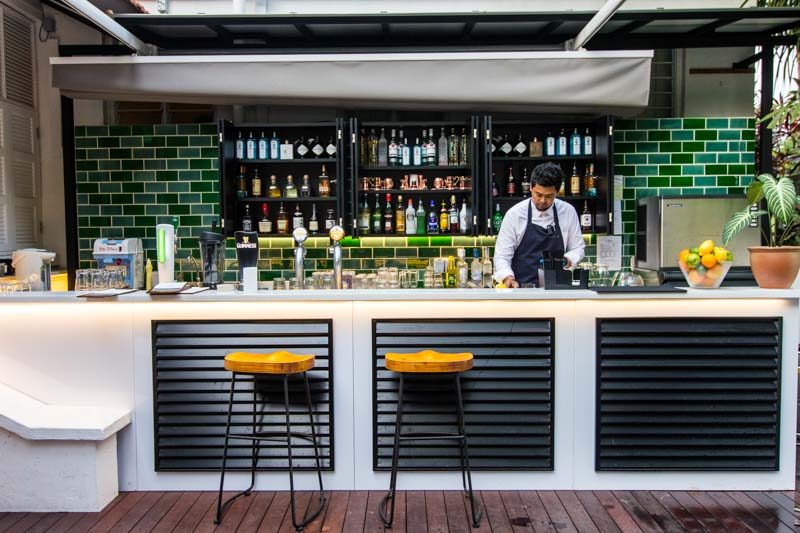 What I really enjoyed was the outdoor hidden bar. Despite it being outdoors, there were hidden air-con vents that ensured nobody would be complaining about Singapore’s heat or humidity.

I thought it was pretty ingenious, and I stayed cool throughout even when we were enjoying some drinks out on the terrace before dinner. 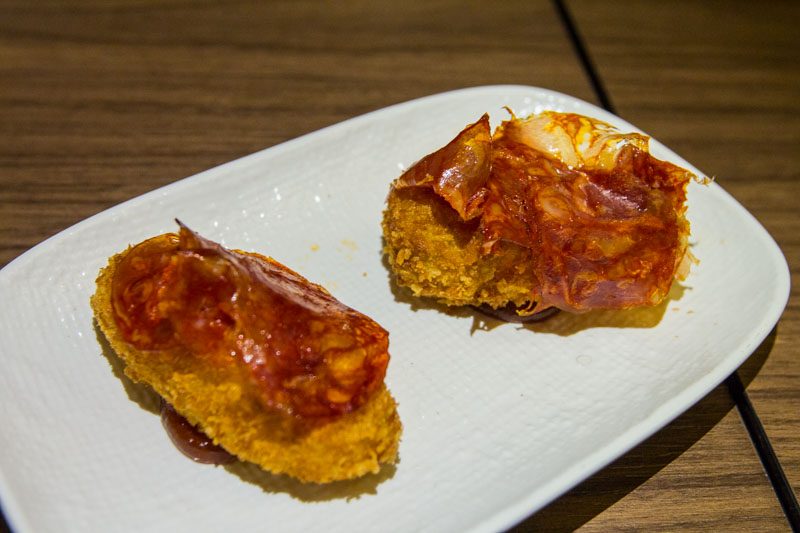 The starter that really amazed me was the Idiazabal Croquettes ($14). The creamy filling was made with a smoked Idiazabal cheese emulsion, that immediately oozes out once I cut into the croquettes.

The cheese was light and very prominent amongst the other ingredients but not overpowering, and the bread crumb coating had a good textural contrast. The chorizo slices on top gave the whole dish a slight smokiness, which went well with the cheese. 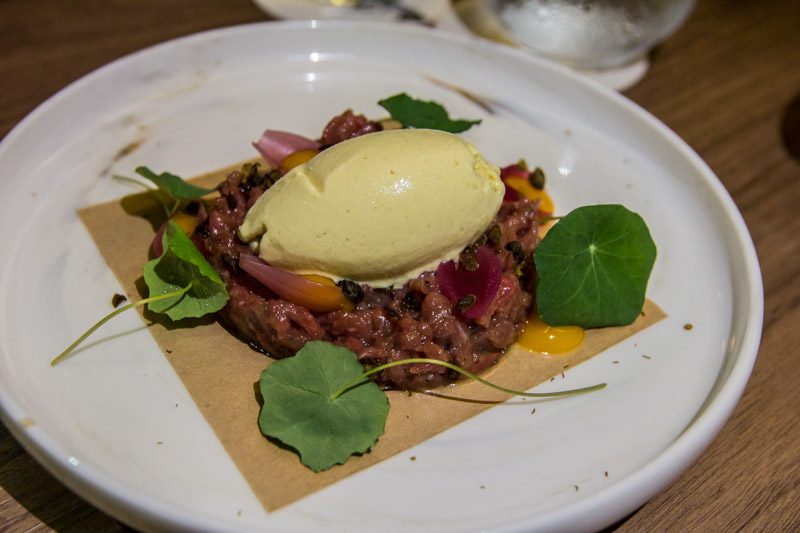 The Lamb Tartare ($20) was an eyeopener. Tartares are traditionally done with raw beef, so this was the first time I had ever tried a lamb tartare, much less one served with a scoop of mustard ice cream.

On its own, the mustard ice cream was extremely sharp and pungent, a little too overwhelming. But once mixed in with the lamb, it mellows out considerably.

The lamb was fresh and had a bit of a crunch to it due to the addition of pickles and the deep fried capers gave the dish a savoury dimension. I thought it was an excellent showcase of how all the flavours were combined together to create a very balanced dish. 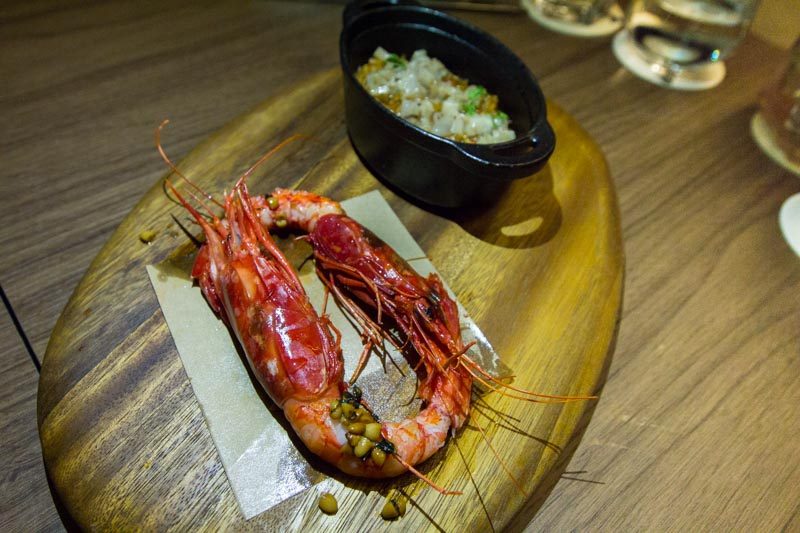 The Chargrilled Carabinero ($28) is another dish that taps into the head chef’s Spanish roots. Scarlet prawns, or Carabineros as they’re known in Spain, are deep sea prawns that are usually served lightly salted and grilled.

It’s no different here; the carabineros are grilled in a charcoal oven and topped with roasted pine nuts, adding crunch to the prawns that melt in your mouth.

The saffron mellow rice, was executed perfectly; cooked with Spanish Bomba rice, the texture of the rice was similar to a risotto, but tasted like a delicious paella. Combined with the hints of saffron and the gelatinous pork trotters, this is a must-try dish. 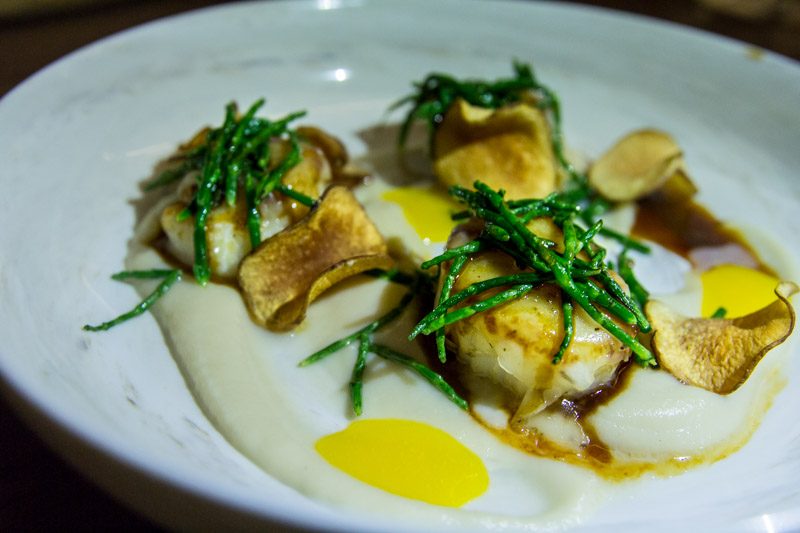 The Japanese Scallops ($27) are panseared with iberico lardo, and served with a topinambur puree and chips, topped off with samphire.

Samphire are commonly called sea asparagus, and when paired with the sweet scallops, it provided a nice briny taste and a good crunch. The topinambur puree was creamy and had a nice hint of sweetness. And, the iberico lardo made the dish rich and smooth. Tropical Fruits ($14) is the epitome of what Botanico is trying to achieve, which incorporates ingredients that are local along with the history of Botanic Gardens. Laksa leaf ice cream is served atop a bed of jackfruit, longan, sea coconut and a tumeric ganache, then garnished with laksa speckled meringue and a sable crumble. These are flavours that Singaporeans are mostly familiar with, but here it’s made into a unique dessert.

The laksa leaf ice cream was delicious, with its taste being prominent but not off-putting, and the fruits and the meringue balanced out the dish.

Dinner started off on a high note with the Idiazabal Croquettes and definitely lasted throughout the meal, ending off nicely with the dessert. The dishes impressed me, especially the thought process behind Tropical Fruits.

I’ll definitely be looking forward to coming back in the future.

Previous articleSeven7h Cucina: Fall In Love With The ‘Pizza-Burger’ Served At A Halal Italian Fusion Restaurant In Novena
Next articlePotato Head Beach Club Bali: A Swanky Beach Lounge In Bali To Enjoy The Sunset With Authentic Indonesian Fare