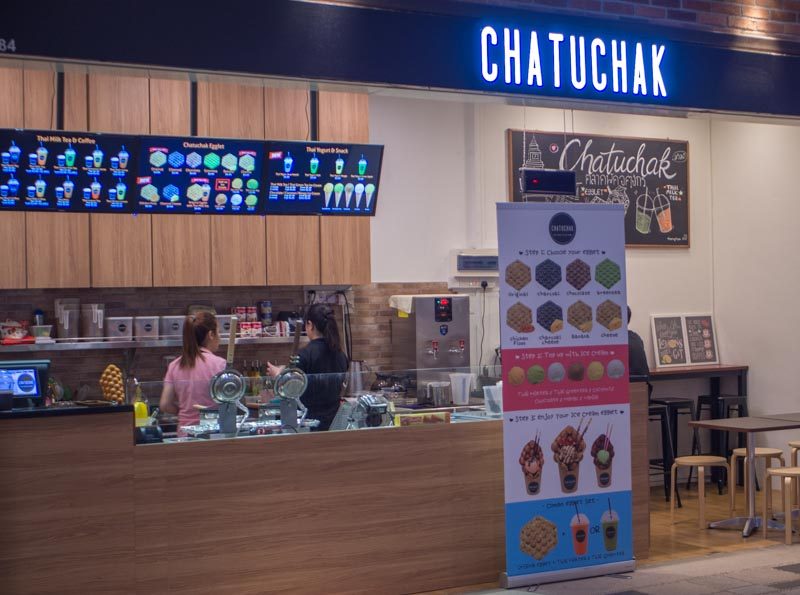 Now, there’s even a place for you to get your Thai desserts during your office lunch break – you’ll find Chatuchak Thai Tea in Icon Village, which is situated near Tanjong Pagar MRT. 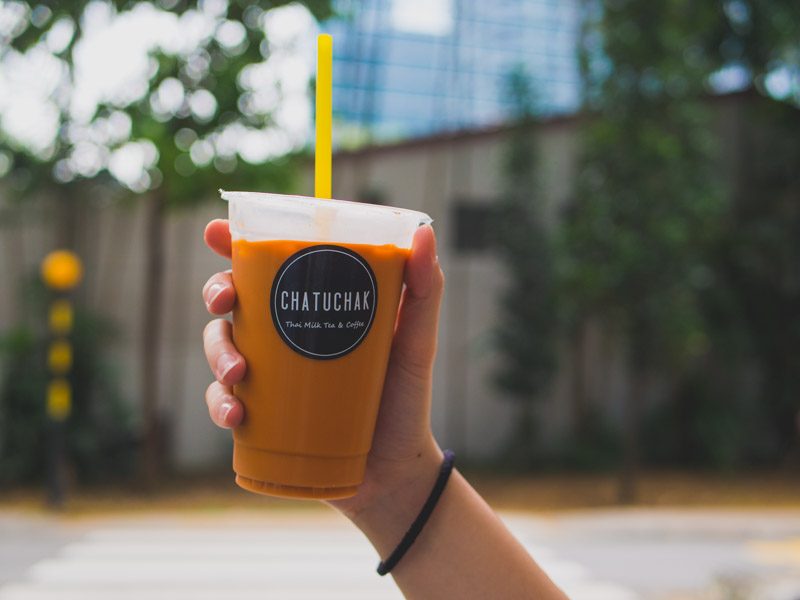 The open-concept store serves a variety of Thai beverages, but what’s interesting is the inclusion of egglets in the menu, which is a Hong Kong speciality waffle. You can choose to top off the egglet with a modest selection of ice cream flavours.

I decided to give myself a sweet treat and so I got three different egglets, each with its own ice cream flavour. Desserts galore! 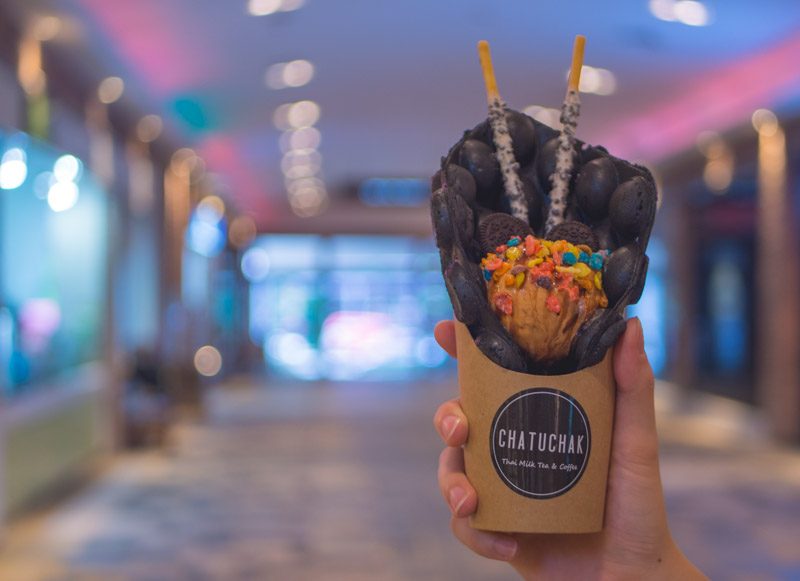 First up is the Charcoal Egglet ($5) with Thai Milk Tea Ice Cream ($2.80). The ice cream was delightfully sweet, but not too much that it makes you feel like you just instantly got diabetes. It also had a very strong milk tea flavour, which is always a good sign. 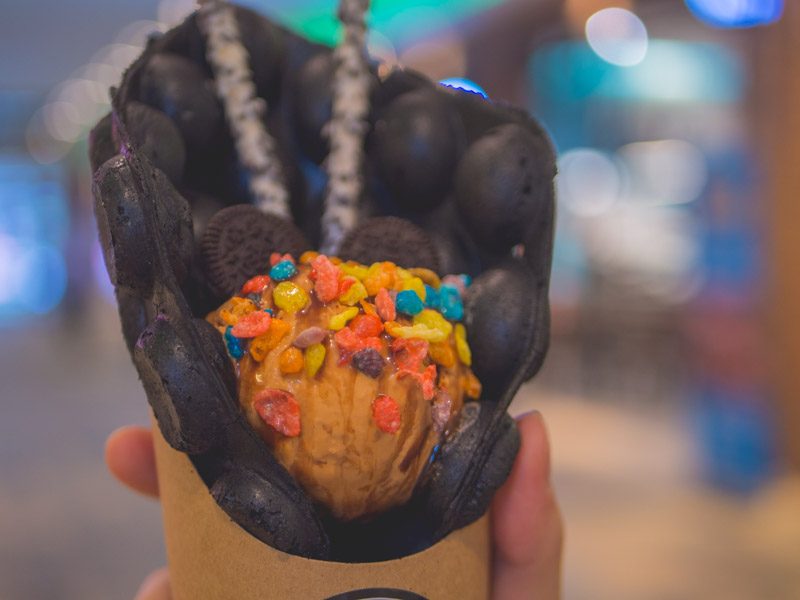 It paired really well with the egglet because the charcoal waffle is plain on its own; it’s just black in colour and very Insta-worthy. The sweetness of the ice cream coupled with the light and fluffy egglet created a not-too-overpowering dessert.

Oh, and there were the Pepero cookie sticks to munch on too. Next, I had the Green Tea Egglet ($5) topped with Coconut Ice Cream ($2.50). The egglet didn’t really have a strong green tea taste to it, which was slightly disappointing.

There was a fragrant after-taste though, and it certainly afforded more of a flavour as compared to the Charcoal Egglet. The ice cream had a subtle coconut taste, which was a tad underwhelming. I was hoping for a little more sweetness from the coconut. Perhaps, it would have been a better choice to pair the egglet with chocolate or mango-flavoured ice cream. Here comes the last one, and it was no doubt my favourite. I ordered the Banana Egglet ($5.50) together with Thai Green Tea Ice Cream ($2.80). This one’s a little different, as it comes on a plate. Know why? Because the egglet has fresh bananas inside it! As such, it’s softer and can’t really be propped up like the charcoal and green tea egglet. It was so tasty, probably because of the sweetness from the bananas.

Eat it together with a spoonful of the green tea ice cream to tantalise your taste buds. It was a very refreshing dessert, perfect for a hot and humid afternoon. The Thai Yogurt Blue Hawaii is essentially a yogurt drink, and it tasted a little like Yakult. Not complaining though, because I love Yakult, but this drink could tone down a little with the sweetness. There was a thicker consistency to it, which is expected of a dairy product.

The cool-blue drink is easily the prettiest drink of them all, with a nice colour and the milky swirls; snap a photo for the ‘gram before you drink it! My Thai Green Milk Tea and Thai Milk Tea were pretty standard, nothing out of the ordinary. But that’s exactly why I like them; they’re classics with a taste that shouldn’t be messed around with too much. Just keep it simple and light, and I’ll be satisfied. 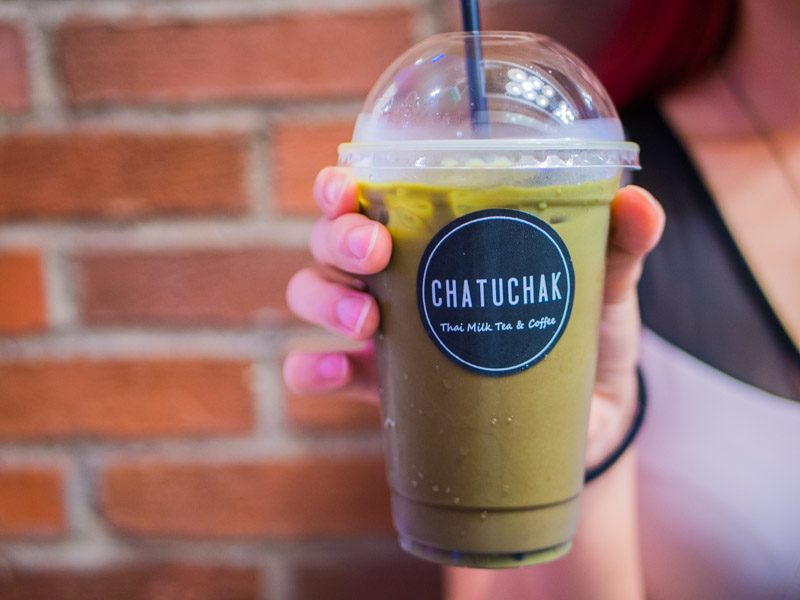 A more interesting beverage was the Thai Green Tea Cocoa. It had a stronger jasmine flavour, enhanced with a slight bitterness from the cocoa. The cocoa also gave a coarse texture to the drink.

At first sip, I found it to be quite strange. But subsequently, it became more and more pleasing to drink. It’s certainly something that grows on you, and I did enjoy the beverage on the whole.

Having tasted an array of items on the menu, Chatuchak Thai Tea is an affordable outlet to get your fix of Thai milk teas and desserts. I really recommend the can’t-go-wrong Thai Milk Tea and the Banana Egglet.

Unable to get your butt over to Thailand? Get some consolation with Thai milk tea and ice cream. You know what they say; ice cream (and alcohol) solves all problems.