There is nothing like an elaborate backstory to really get your appetite going. To make your dining experience a little more exciting, Chi Kinjo along Stanley Street plunges you into the world of star-crossed lovers, tangled family affairs and complicated gang relations.

In this tale, Chi Kinjo is not only the name of the restaurant but also the daughter of a powerful yakuza boss. If you’ve been around the area, you’ll know Chi Kinjo’s back story is wonderfully intertwined with joints like Mona and Sum Yi Tai.

I won’t give too much away as of how they are related, because half the fun is finding out for yourself. The restaurant is where all the action happens, and it’s split into two main parts. Upstairs, you can find modern Japanese bites whereas downstairs is a highball den. 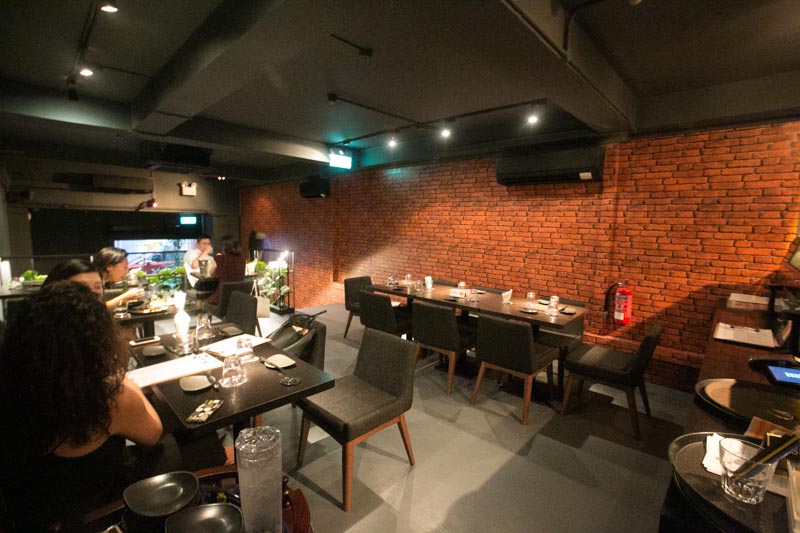 The main dining area was cosy and furnished simply with clean and modern chairs and tables. 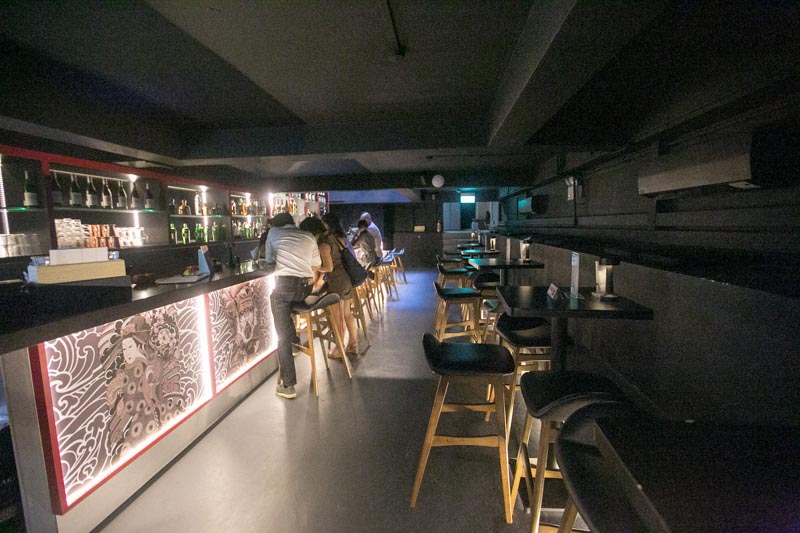 The highball den was a lot darker than their main dining area, making it a more intimate setting to sip on a whisky highball and even exchange a few secrets. 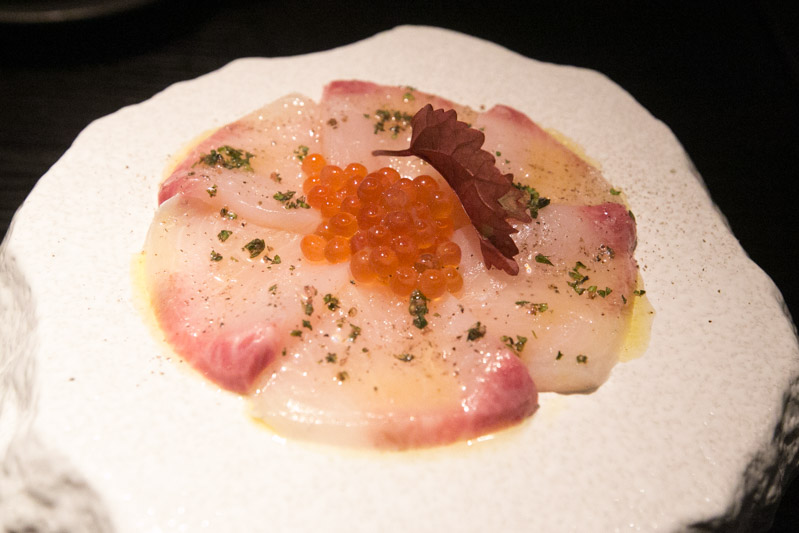 We began with the Hamachi Carpaccio (S$16), a rather elegant dish. Beautifully plated, this dish featured thinly-sliced yellowtail sashimi, sprinkled with finely chopped truffles and topped off with a spoonful of ikura pearls.

Truffles have been the go-to garnish in the last few years. This aromatic mushroom definitely helps to elevate any dish. While I appreciate the use of truffle, one has to use it carefully and sparingly, lest it overpowers the dish.

Chi Kinjo wielded this luxury mushroom quite well, and the hamachi was sweet and fresh while the ikura supplied that brininess that we all know and love. A simple and delicious way to start the meal. Next up, we were served this stunner — the Salmon Ceviche (S$18). A play on the Latin American dish, this ceviche had cubed salmon, swordfish and avocado drizzled with yuzu juice, rice vinegar and a little dollop of wasabi. A real feast for the eyes: there were even a couple of edible flowers in the ceviche.

This was accompanied by a stack of Chi Kinjo’s homemade prawn crackers. 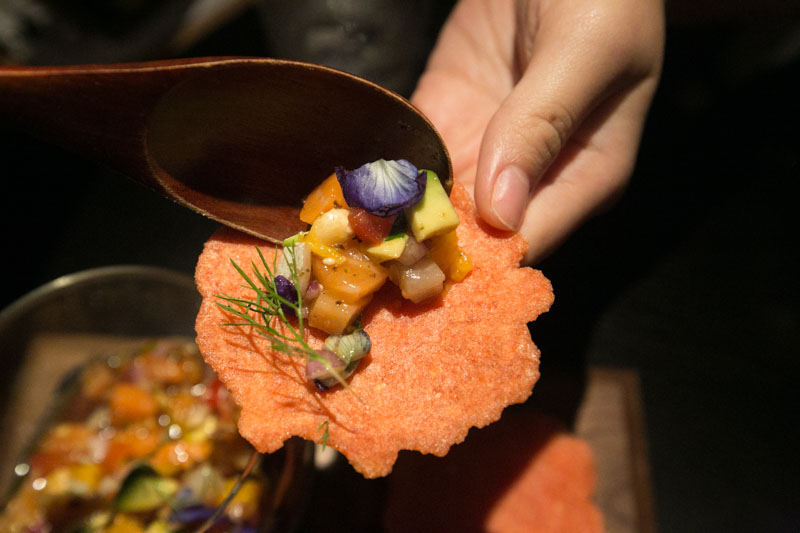 I spooned a generous dollop of the ceviche on to the cracker and just went for it. The prawn cracker was crispy and rich with that crustacean goodness while the ceviche was light and fresh.

The prawn cracker served as a good contrast to the ceviche, making each mouthful rather scrumptious. An ingenious twist on ceviche, this is a definite must-order.

A good test of any Japanese restaurant is how they handle their sushi. You have to agree sushi is synonymous with Japanese cuisine and notoriously difficult to perfect. All the elements have to be balanced and work in harmony with each other.

That being said, I was pretty excited to try what Chi Kinjo had to offer. For Chi Kinjo, their nigiri comes in aburi-style which means the fish is torched before being served. I’m quite partial to aburi-style nigiri, as the torching the fish usually intensifies the flavour of the fish. 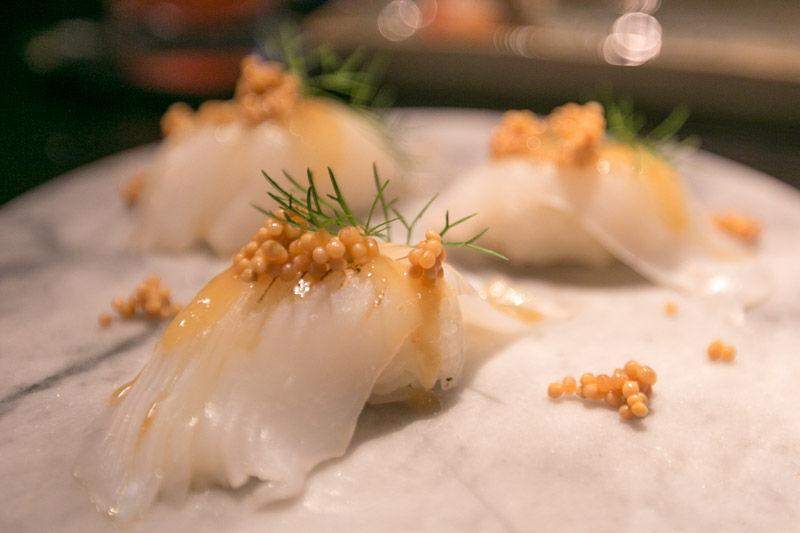 We tried several of Chi Kinjo’s nigiri, the first being Ika Miso Aburi Nigiri (S$12 for two pieces). As with most of Chi Kinjo’s dishes, they are always trying to push that creative envelope. This dish had seared squid topped with mustard seeds, shiso and miso paste.

The mustard seeds were an unconventional ingredient, but one that I liked. They added great texture and made an otherwise rather pedestrian Ika nigiri more interesting. 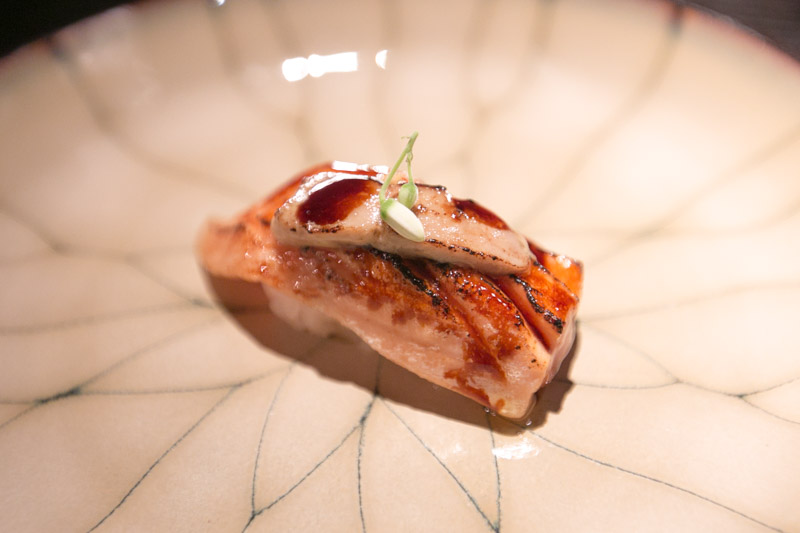 Another notable nigiri was the Salmon & Foie Gras (S$12 for two pieces). This is no ordinary aburi salmon sushi, as Chef Lamley of Chi Kinjo marinated the foie gras in miso and milk to really bring out the fattiness.

The nigiri was utter bliss — the foie gras and salmon melted the moment I popped it in my mouth. 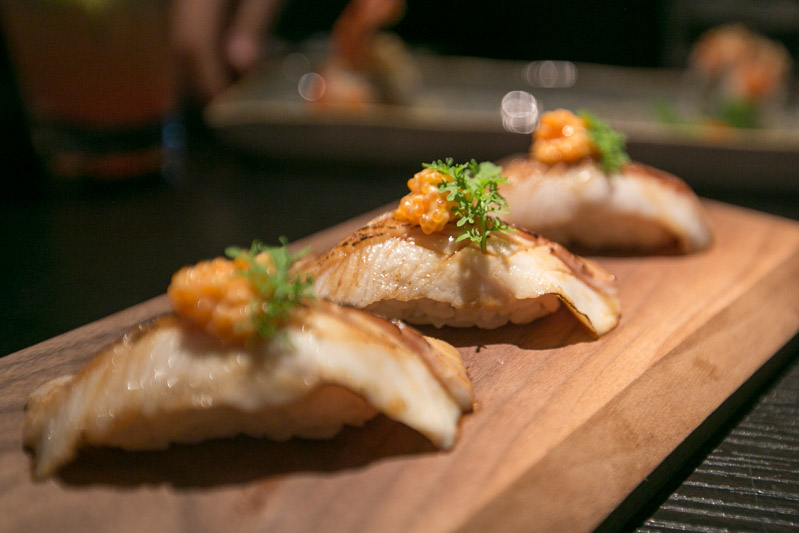 Another delicate creation by Chi Kinjo has to be the Buri Cheese (S$12 for two pieces). The star of this nigiri has to be the seared Buri fish (the highest grade of Japanese Yellowtail), which is topped with tobiko cheese.

The fish tasted sweet and clean, and the quality of fish really shined through. My only gripe was that for such a dainty number, perhaps the tobiko cheese was not really needed. 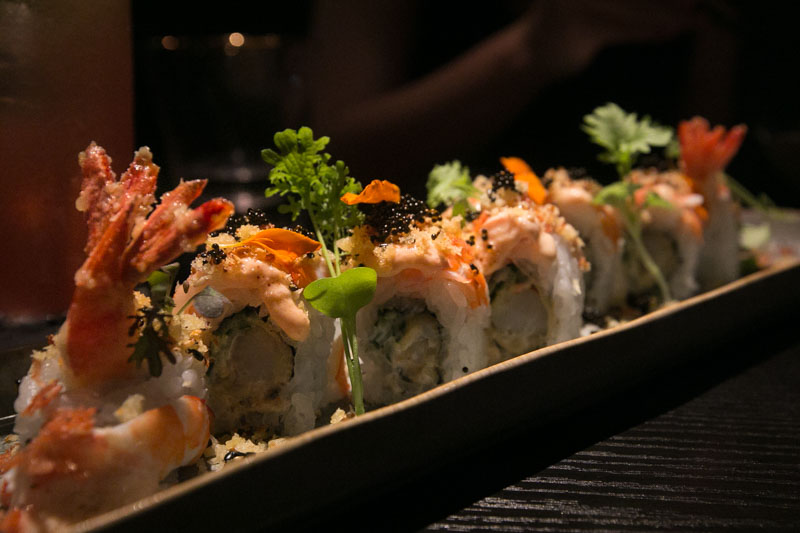 Still riding that sushi train, we were served the Crouching Tiger Roll (S$20) which was prawn tempura maki with mentai mayonnaise. 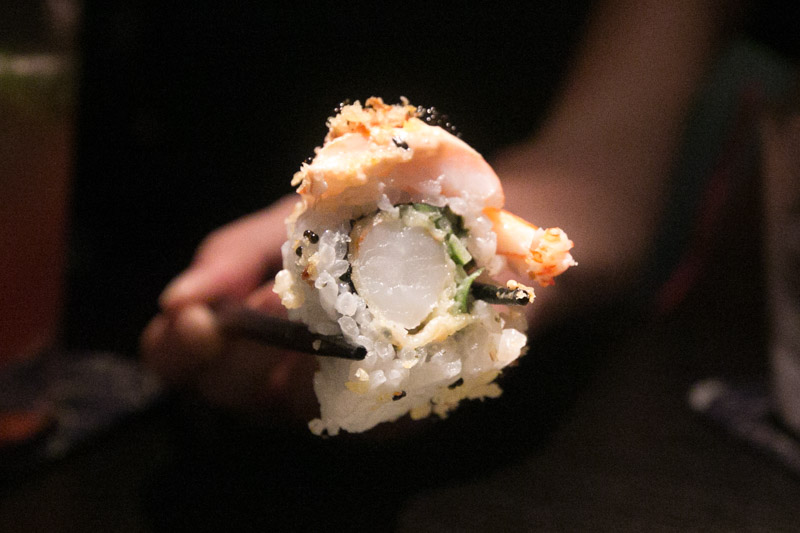 As far as makis go, this was pretty good and hit the spot. The prawn tempura was crispy and plump while the mentai mayonnaise supplied that trademark spicy kick.

Don’t get me wrong, this was delicious but nothing exactly groundbreaking in the world of sushi. 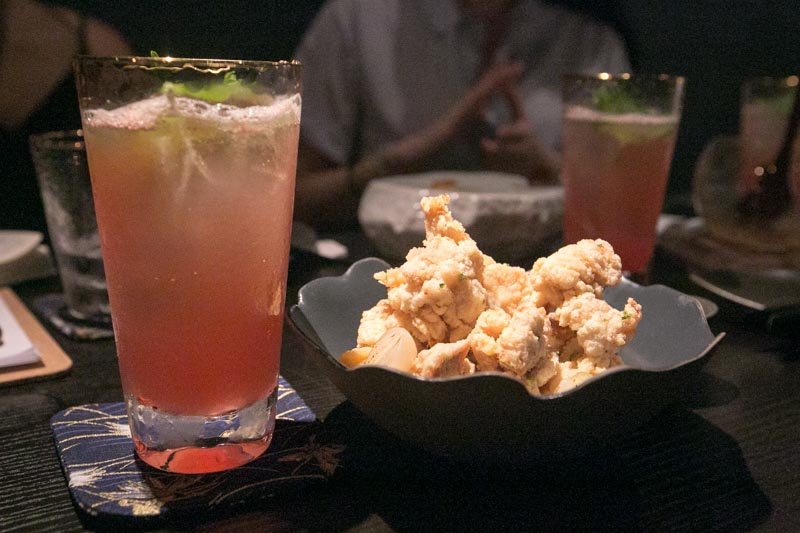 After all that sushi, we were served some of Chi Kinjo’s cooked items. To start us off, we had the Kaffir Lime Karaage (S$15). This classic chicken karaage came with a zesty twist and a red pepper dip. 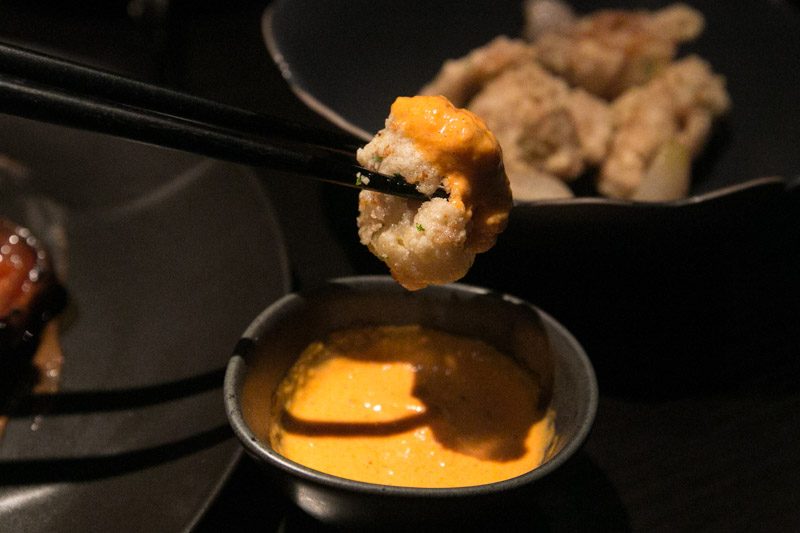 The karaage was crispy and well-seasoned, while the kaffir lime lent a fresh citrusy note to the chicken which I found quite enjoyable. The red pepper dip was creamy and supplied good heat to the chicken karaage.

Similar to the Crouching Tiger Roll, the chicken karaage was nothing to shout about. 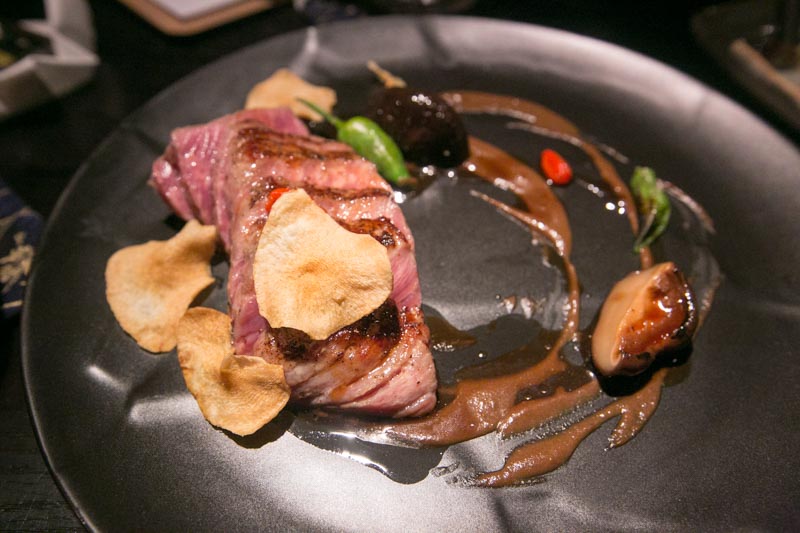 Following that, we were presented with the Smoked Striploin Steak (S$28). Truly, this had to be pièce de résistance of the night. The grass-fed Australian Striploin was meticulously prepared to ensure each square was tender to a fault.

Chef Lamley first pan sears the beef to get those caramelised edges and seal in all that goodness. He then finished this glorious piece of meat in the oven. 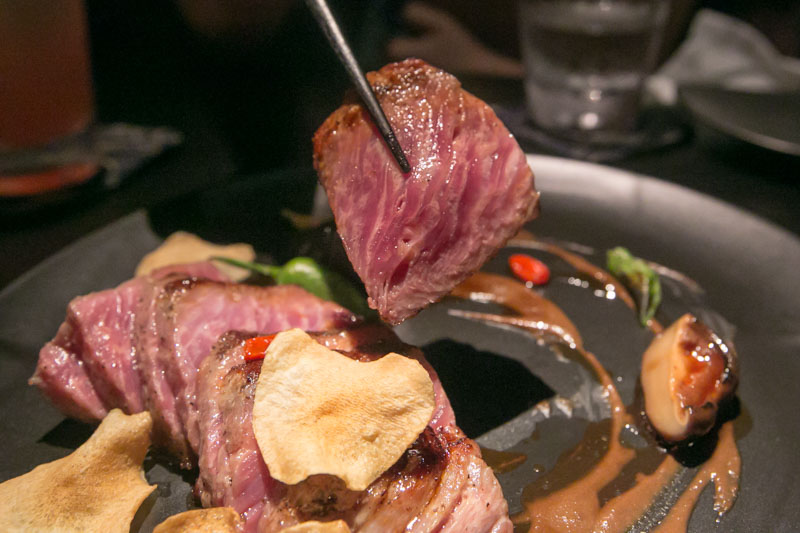 All that extensive preparation certainly pays off, and each slab of beef was buttery and flavourful. I paired it with the accompanying black garlic onion cream reduction and sunchoke (Jerusalem artichoke) chips.

Each mouthful was indulgent and highlighted each element with confidence and finesse. Before I knew it, we were licking the plate clean.

Chi Kinjo presents an interesting premise; who doesn’t relish a little tale of forbidden love as you nibble on delectable sushi creations?

There were certain misses with Chi Kinjo’s menu, however, there were just enough notable dishes to warrant a second visit. A cosy and fun little joint to usher in the weekend for sure!