We’ve all had our Circuit Breaker sins. Some drank much more than they’d dare to admit, others shopped their weight in clothes they’d probably hardly use. For me, it’s handmade jesmonite and clay earrings. Yes, of all vices I could have, over adorning my ears with embellishment is perhaps not where you thought this was heading.

Over the two months of being stuck indoors, I fell into the deep, seductive rabbit hole of polymer clay, jesmonite, resin, and the works. All these are different mediums often used in handmade jewellery, but one stood out as the friendliest to the environment and least wasteful—jesmonite. Naturally, I traced back to the OG and also the leading supplier of jesmonite in Singapore, Chokmah Singapore, a duo who regularly conducts workshops and sells handmade trinkets that are indeed a sight for sore eyes. Here’s a quick crash course for the uninitiated—jesmonite, often lauded as eco-resin, is a water-based, non-toxic composite material often used in crafting and fine art. Highly adaptable and reusable, its ability to be broken down and recrafted is what makes jesmonite so sustainable, and so great.

Tonight, Chokmah founders Joyce and Halim welcome us into their cosy HDB apartment-turned-art studio located in the throes of Bukit Panjang. From the get-go, Joyce really lives up to her namesake. Bubbling with enthusiasm and warmth, Joyce greets us like old friends in a coffee shop. Before we begin, Joyce sits us down around the crafting area and starts by asking us to name one thing we like about the person on our left.

A few heartfelt compliments from my companions later, my being swells with affection. I walked in, expecting a crafts workshop, but the experience already brims with wholesomeness. I mean, 10 minutes in and this session’s already doing me more favours than my ex-therapist ever did. No tea, just facts.

Anyway, getting on with the programme, Halim breezes us through a brief background on Jesmonite, and we’re ready to get our hands dirty. Lucky for us, the process begins with the fun part. Before us sit rows of bottled jesmonite chips in all sorts of fun and cheerful colours. My eyes feast quickly and excitedly on the rainbow of terrazzo-style chips—it’s nearly impossible to pick which ones to forgo. Still, for the sake of #aesthetics, I steel myself to choose only colours that complement my forest green base like the fancy-pants I am. 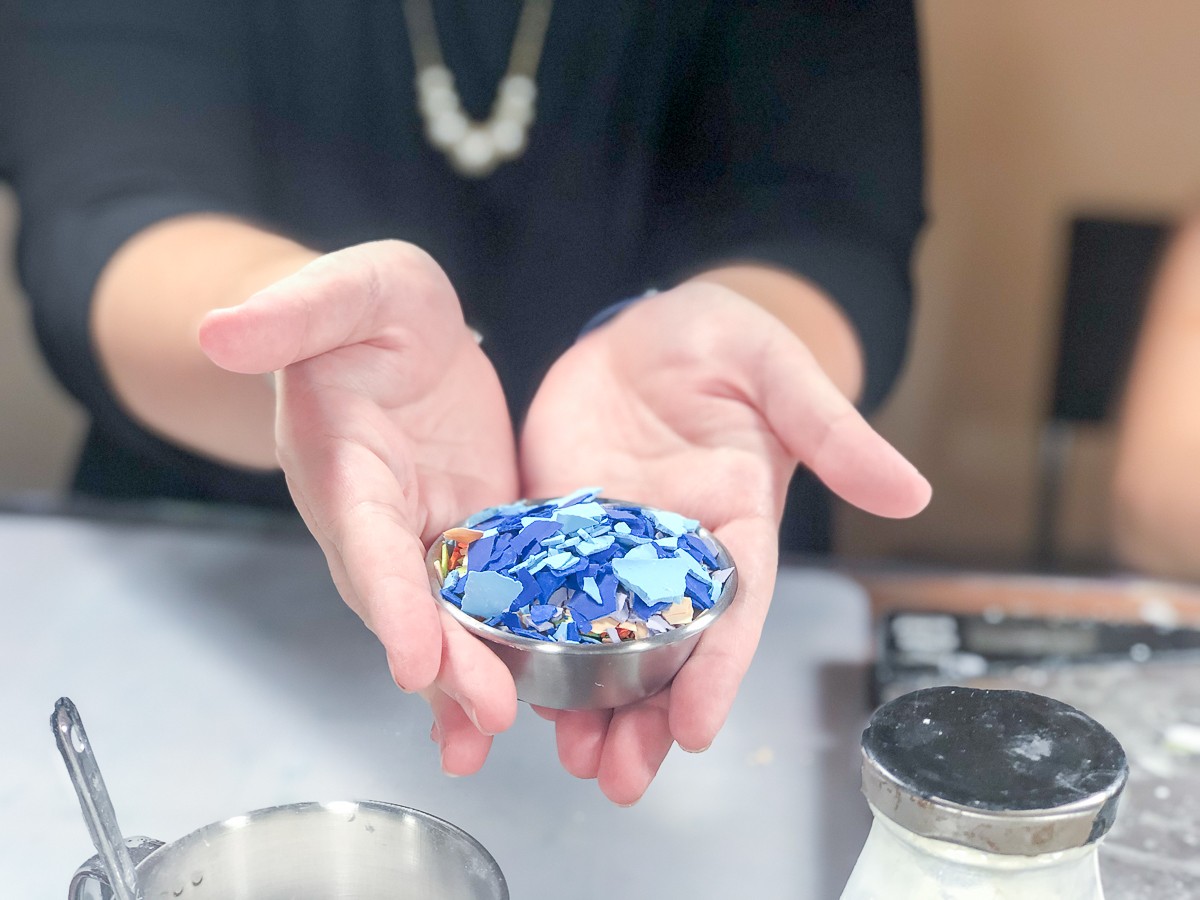 We fill up the chips into a little saucer until just a little over the top—Joyce reminds us that if we’re going to want the chips to show at all, this amount possesses just the right proportions. Crafters can break down the chips into tiny little chunks or leave them as larger, statement pieces, depending on the artistic direction you’re going for.

Mixing it all together At this point in the process, timing is critical. Halim explains to us that the coming steps have to be done in 10 minutes or less because of how quickly jesmonite liquid hardens, which is a double-edged sword really, considering how this was the very fact that drew Joyce to jesmonite in the first place.

“I love other mediums like clay too, but jesmonite is so fuss-free because it self-dries in just half an hour,” she chirps. The liquid to powder ratio is exact, with a delicate 64g of liquid to 160g of powder, if you’re making a pill tray like we are. After stirring the mixture until it resembles a ‘melted ice cream’ consistency, as Halim puts so deliciously, we carefully spoon the chips in and stir to form an oatmeal-like texture. Yes, if it weren’t already evident from my lexical choices, I am, indeed, a human pig. So it’s no mystery why I write for SETHLUI.com. Laying it into the mould Quickly, we slather the mixture as evenly as our human hands can, with Joyce and Halim swooping in from the sides to help us tap down any possible air bubbles. Halim disclaims that due to nature of it being handmade, tiny air bubbles might still creep up upon us hither and thither. But I embrace it as character and certain je ne sais quoi. Using a mighty ice cream stick, we poke down the mixture to ensure that our chips sink promptly to the bottom of the mould, which will—wait for the big brain moment—actually be the top of our pill dish. When the excitement’s done, we set our moulds aside and leave our trays-to-be to rest and take whatever time off for self-care that they need. While we wait, our time is interluded with a quick demonstration on how to make the jesmonite chips which, if you recall, were used in the beginning. We know the drill—portioning, weighing, and mixing jesmonite comes as second nature to us now. Except, if you’re going to be a muddlehead like me and forget to reset the scale before pouring in the rest of the jesmonite liquid, we’re going to have some problems. I thinly spread out my chip mixture into a small silicone mat to dry—though, mine’s going to take a little longer than usual, but that’s alright. We improvise, adapt, and overcome. Halim using my dish to demonstrate sanding – less work for me!

So arrives the part which many artists I know dread the most. Ah, the infamous sanding has befallen us. As we peel off our hardened pill trays from the moulds, we notice that it’s, interestingly, warm to the touch. “It heats up just a little bit because of the chemical reactions as it’s solidifying,” explains Joyce. Two types of sandpaper with varying thickness are placed before us—the thicker one to first rough down a thin layer for the chips to show, and the finer sandpaper to smoothen out the initial scratches. Semi-sanded product – the chips are beginning to show

Put on some music or settle in for a conversation with friends, because it’s going to be a while. Despite its bad reputation, there is, admittedly, whimsy in sanding because the gratification that fills you as bright chips begin to show is genuinely cathartic, to say the least. It’s kind of like playing a game of scratch-off, except that it’s sure-win; with the beauty of your end product as the prize in itself. Many rounds of sanding and an entire thumb workout later, Halim coats a food-grade organic beeswax sealant over our pill trays and tops it off with a gleaming Chokmah label. Not to brag, but I’d pay good money for my work of art if I stumbled upon it in stores. Just artist things.

All too soon, the workshop comes to a close, and it’s time for us to be on our way.

“It’s the end of our workshop, but the start of our friendship,” Joyce tenderly affirms in a manner that only a jesmonite princess can. Tonight brought two of my closest friends together Following the philosophy of famed Japanese repair technique Kintsugi, in which gold lacquer is used to mend areas of breakage in pottery, jesmonite too, can be similarly repurposed. Pop the pieces back into the mould, fill in the spaces with jesmonite mix, and in half an hour, you’ll land yourself a gorgeous, inimitable renewed piece of work.

You’ll have to tolerate sappy ole’ Vera for just a bit. Still, hearing Joyce beautifully explain the process inevitably reminds me of how, perhaps, I’ve been approaching many circumstances in my life wrongly. It really puts things into perspective—that broken doesn’t mean gone, that salvation is what you make of it, and that there’s redemption in all things. After all, as Joyce so fervently reminds us, “once broken, made new”. Wise words to live by.