With its pristine, all-white structure, CHIJMES definitely is a popular spot for OOTDs and architecture photography; let’s face it though, it’s a little atas and not to mention super cliche. 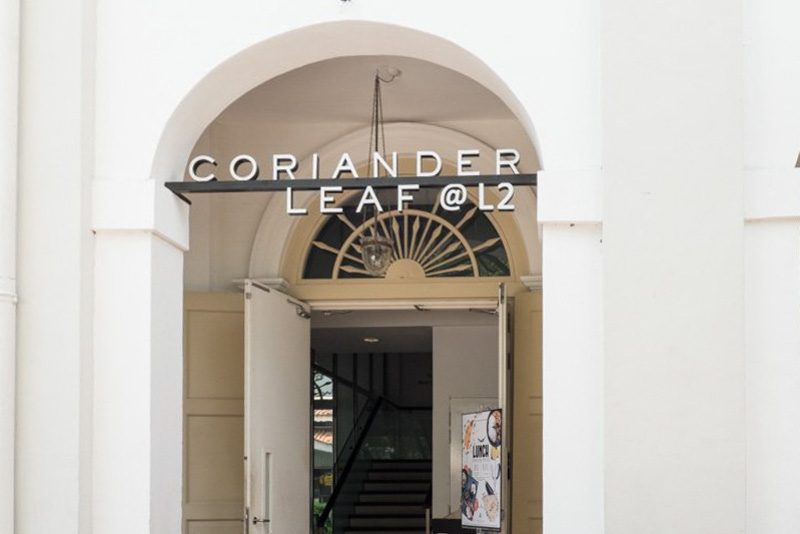 That being said, it’s also home to a not-so-ordinary restaurant: Coriander Leaf opens the gates to the world of Pan-Asian cuisine, with a menu that’s categorised into distinctive five flavour verticals of Fresh, Familiar, Spicy, Umami and Sweet. 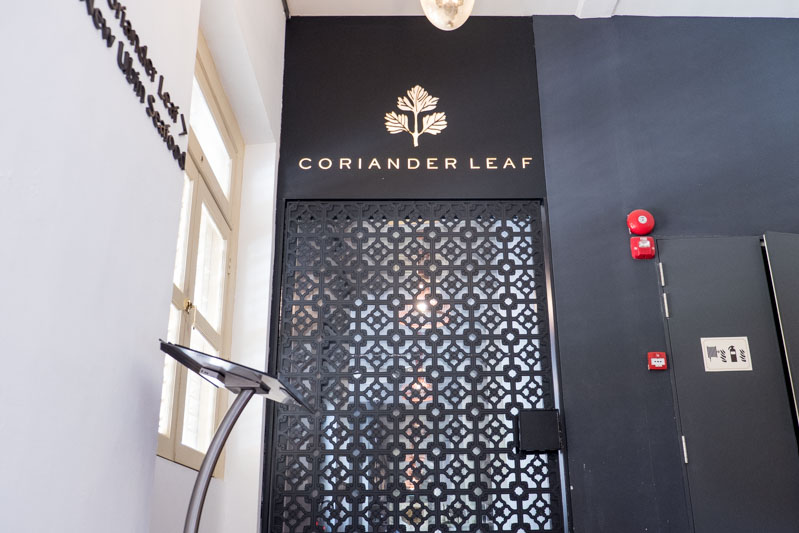 Established in 2001, Coriander Leaf was originally situated at the Gallery Hotel but now sits on the second floor of CHIJMES, where you’ll be warmly welcomed by chef-founder Samia Ahad.

Renowned for her traditional Asian recipes and passion for spices, Samia makes sure every guest is in good hands from the moment he or she sets foot in the restaurant. 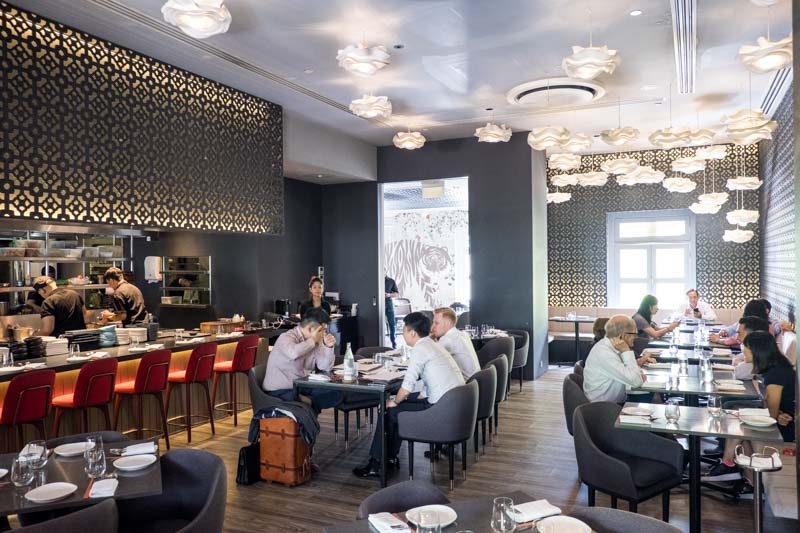 I didn’t know what to expect when I entered the dining area, but as I stood in the middle of the chic interior, my artistic senses tingled.

From patterned walls inspired by the antique tiles of CHIJMES to designer Budiman Ong’s zipper lights hanging from the ceiling, I was impressed by the tiny details and personal touches exhibited throughout the spacious room. 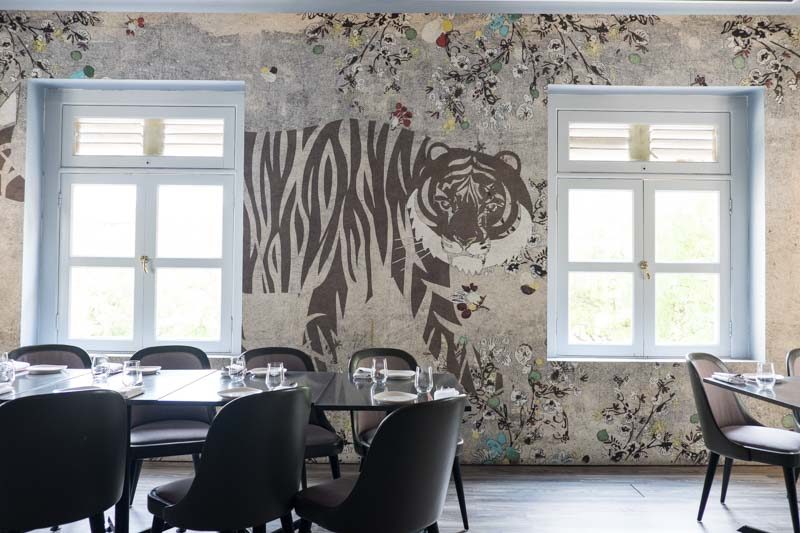 We were escorted into the private dining room which seats up to 20 diners, the walls were illustrated with flowers and a huge Bengal tiger hinting at Samia’s roots where her passion for Pan-Asian cuisine began. 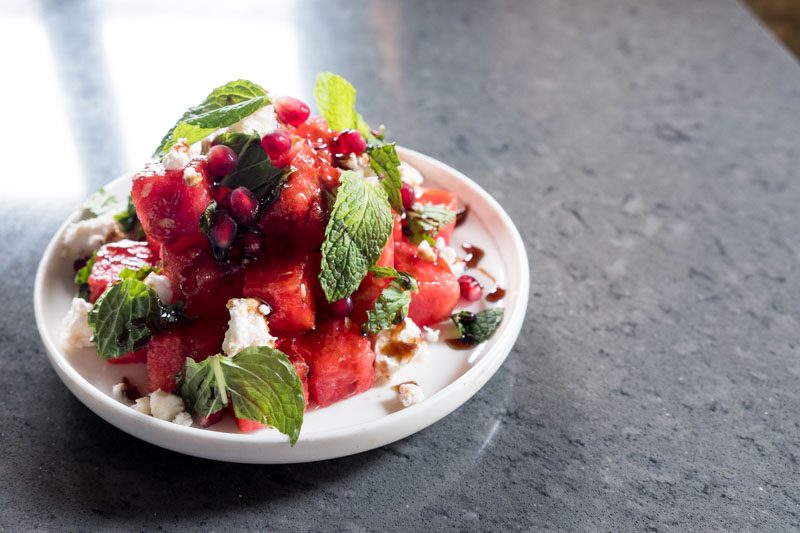 Feeling delighted with the modish yet hospitable atmosphere, I was even more thrilled when the Watermelon Salad ($14) was served due to the dish’s vibrant colours.

The watermelon soaked in lime juice and Persian rosewater burst with a tangy sweetness, further enhanced by the gula melaka-coated pomegranate. The Turkish cheese had a gentle sourness which paired well with the mint leaves.

This salad was hands-down one of the most refreshing starters I’ve had so far. Another dish from the Fresh flavour vertical was the Marinated Prawn Salad ($16), and it was indeed, fresh. As a Thai-inspired dish, the prawns and coriander leaves were infused with lime.

The sweet and sour prawns and crunchy, milky grated shavings of coconut gave the flavours a great balance. 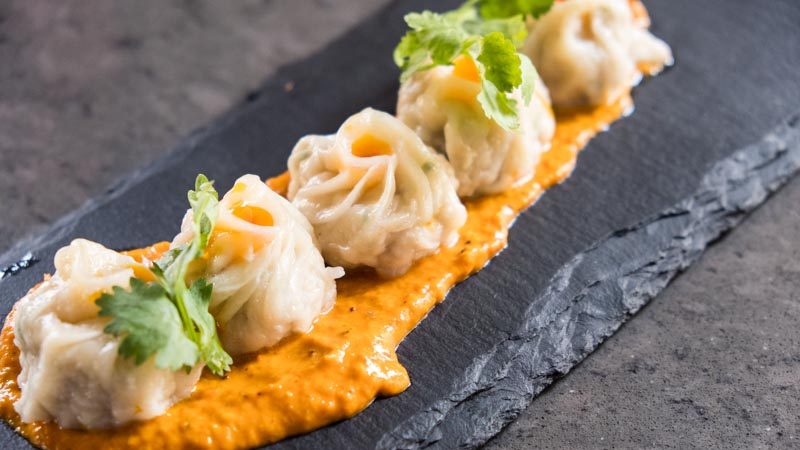 When the Nepalese Minced Chicken Momo Dumpling ($15) reached the table, I let out a high-pitched “aww”. These bite-sized dumplings were adorable, lined up on a stream of roasted tomato relish with timur spice.

And just like the prawn salad, the momos and several other dishes on the menu were evidently garnished with fresh coriander leaves, artfully mirroring the restaurant’s name. It pained me to take a bite, but when I did, I was teleported to a world of spices. The juicy chicken filling was encased by the chewy layer of the momo, while the creamy sauce left a pleasant, lingering heat at the back of my throat. 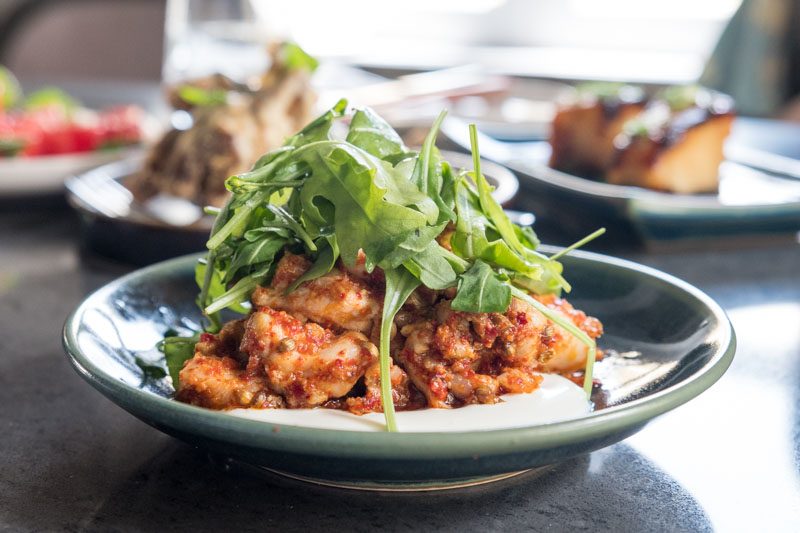 Even though I knew more spices were coming, I was hit hard with Samia’s Signature Frontier Chicken ($20). Smothered in chilli and coriander seeds, the chicken with arugula stirred up a tsunami of spices in my mouth that reached my nostrils.

If you’re not a big fan of coriander seeds or intense spices, I’d recommend generously dipping the meat in the accompanying yoghurt sauce. 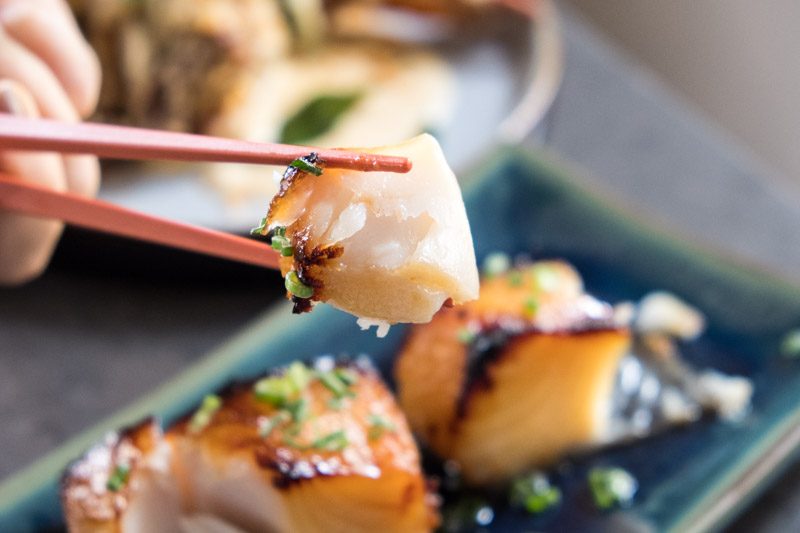 I easily broke apart the layers of the fish with my chopsticks, and the pieces melted in my mouth with hints of sweet, caramelised miso.

The skin of the cod released even more umami as the soft fats glazed over my tongue, and the chopped chives gave the dish that extra kick it needed. 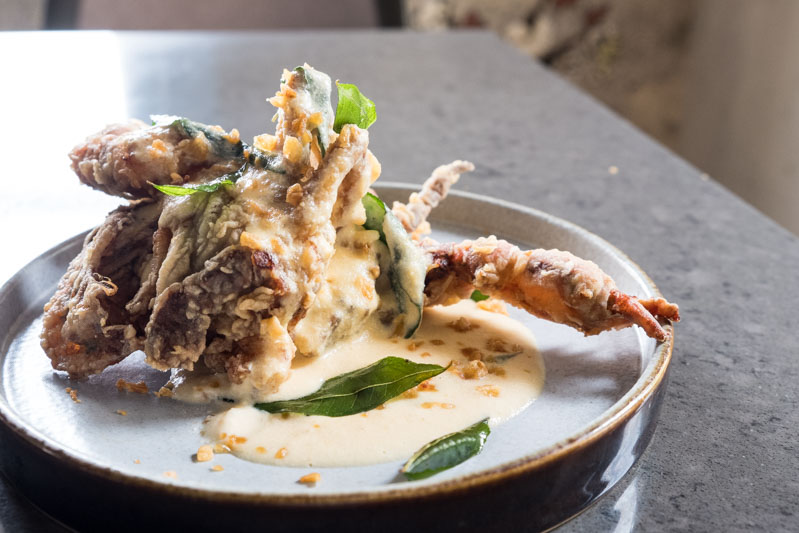 Before this tasting, I’d never had soft shell crab before and wondered how soft a crab could actually be. The Soft Shell Crab With Salted Duck Egg Yolk Sauce ($18) was a delicious answer to my curiosity. I lifted the claw of the crab and was taken aback by how soft it was, almost like a deflated balloon (in the most positive way possible).

The salted yolk sauce complemented the thin layer of crispy batter of creamy and slightly salty tones, while the curry leaves gave a crunchy texture to the overall dish; this was a very good first-time experience indeed. 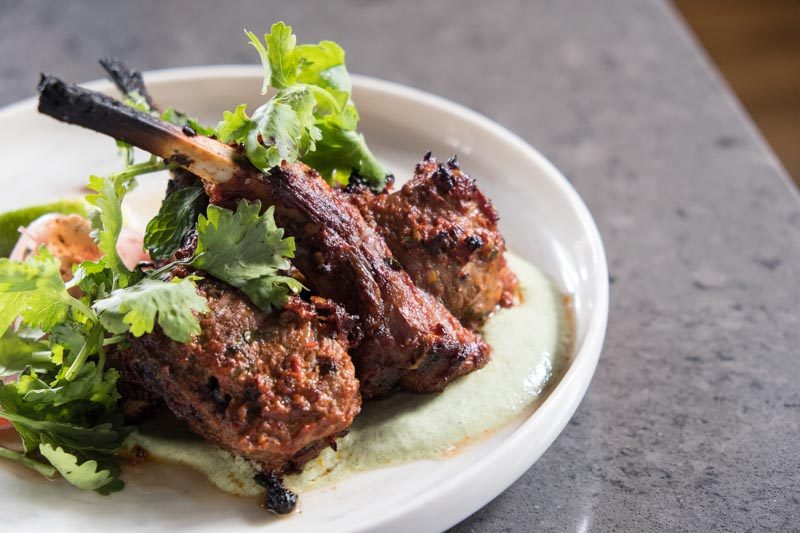 The Charcoal Grilled Baby Lamb Chops ($29) was served with two generous portions of the lamb slathered in harissa, lying on a light green yoghurt sauce with pickled onions on the side. 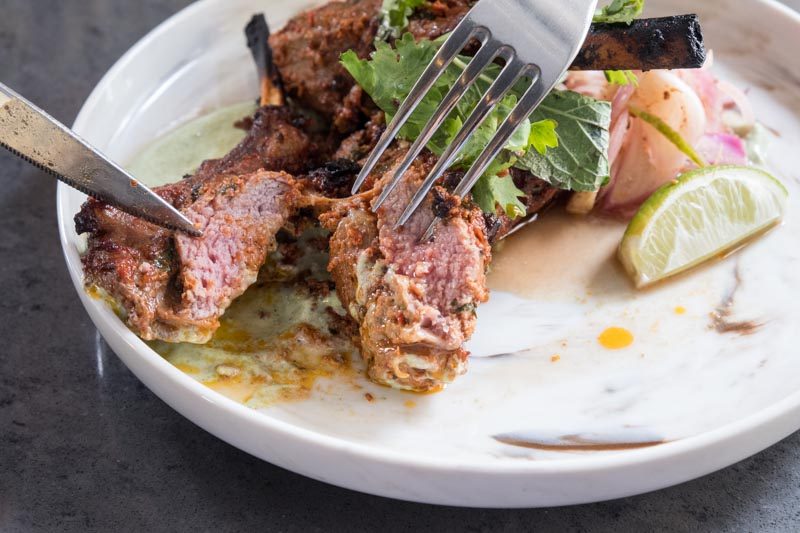 Once I cut into the lamb, I made sure to have a little bit of everything together — a piece of lamb with a dollop of yoghurt and pickled onions on top. The meat was tender but a tad dry, but the spices blew me away as expected along with the creamy tartness of yoghurt. 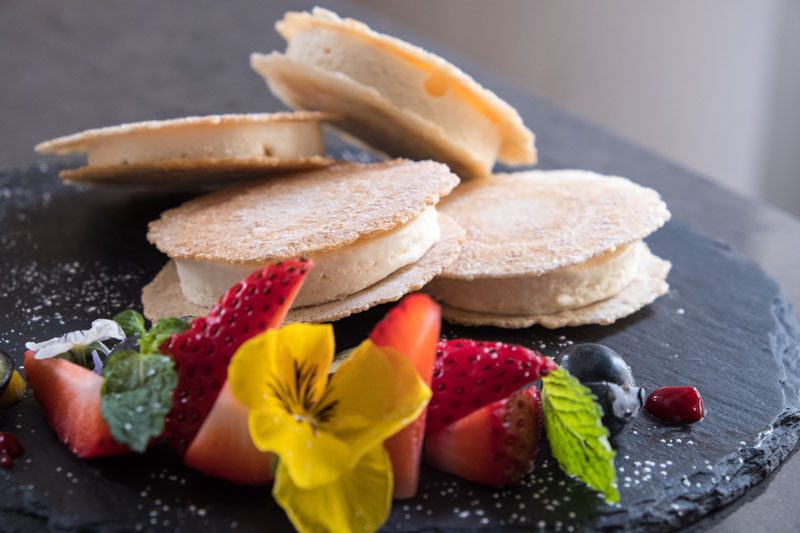 Naturally, we awaited something sweet after the mains. Thanks to Chef Iskander Latiff (the Chef de Cuisine who gives modernity to Samia’s traditional recipes), we tried his unique take on desserts like the White Rabbit Ice Cream Sandwiches ($14).

You read that right – it’s made of our childhood favourite White Rabbit Creamy Candy which is wrapped with edible glutinous rice paper.

Thin and crispy wafers sandwiched the candy-infused ice cream, while bright edible flowers, mint leaves and berries brightened the plate. The creaminess of the ice cream was on point, but I would’ve thought it was just vanilla (I might’ve not noticed the flavour of the candy if I haven’t been told so). Chocolate is a must for me in desserts and if you’re a fellow choco-lover, just wait till you’ve tried the Spiced Valrhona Lava Cake With Teh Tarik Ice Cream ($18). A lava cake with spices and house-made teh tarik ice cream?! 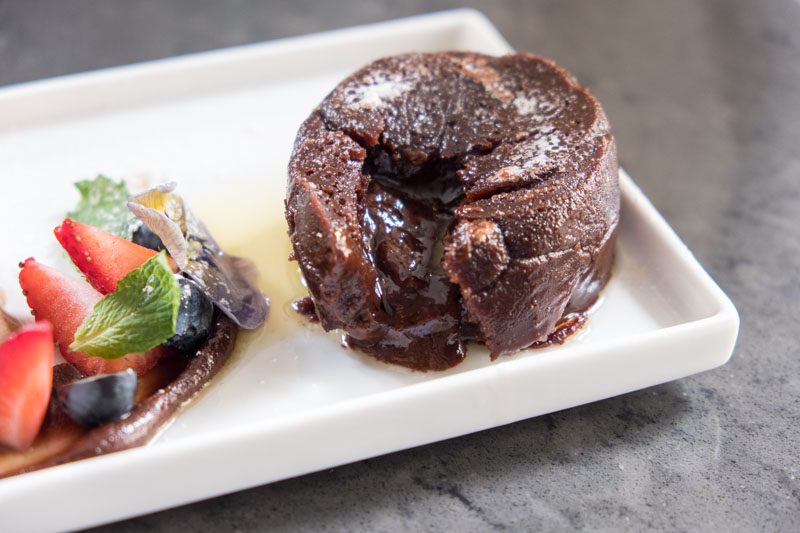 Of course, I had to break apart the lava cake for that ooze-porn, and soon after, a pungent whiff of garam masala followed. The lava was rich with the valrhona chocolate and the teh tarik ice cream also had a sticky and thick consistency like gelato.

This dessert was definitely well-rounded and paid homage to everything that Coriander Leaf stands for.

At first glance, Coriander Leaf might come across as your typical, unapproachable atas restaurant, but the creative atmosphere and friendly staff will efface this misperception.

With every dish, I was taken on a see-saw journey of Samia’s traditional expertise and Iskander’s contemporary touch. Both the regular and vegetarian menu feature an extensive mix of all the Asian flavours, with monthly specials focusing on specific regions.

Shake your dinner date plans up and head there for a culinary experience worth shelling out for.