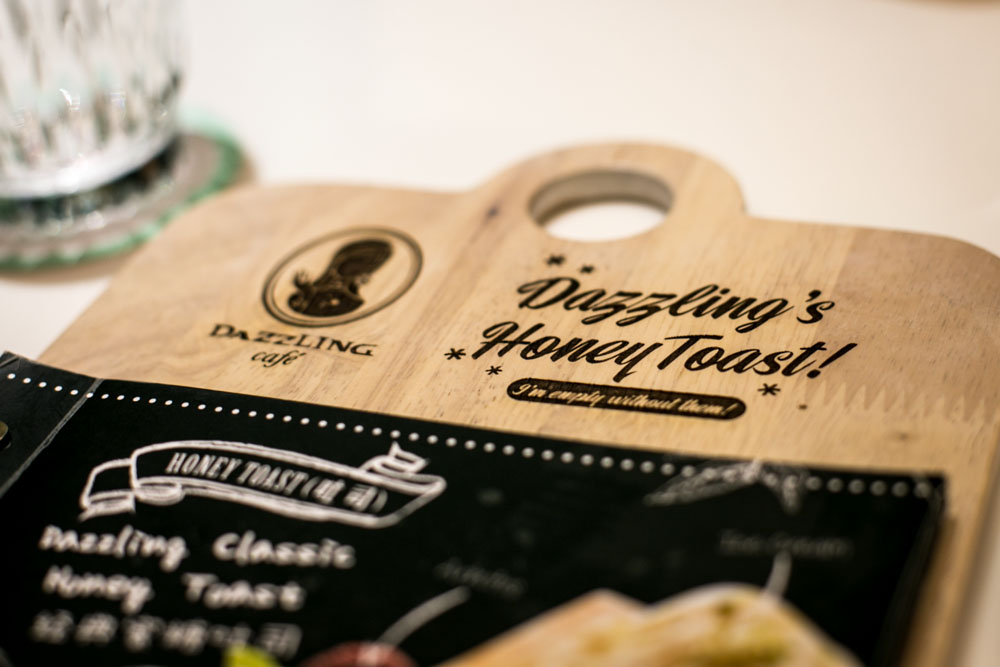 Setting its sights for South East Asia, Taiwan’s Dazzling café opens as one of the first few tenants in the newly renovated Capitol Piazza. With 9 outlets in Taiwan, 4 outlets in Shanghai and a store in Hong Kong, the latest Singapore addition brings with it a number of classic and interesting signature dishes including variations of its famed Shibuya Honey Toasts and also its Tom Yam Pasta which is exclusive to its Singapore outlet. Located on the ground floor of Capitol Piazza, the chic looking café has a seating capacity of 90. Upon entering the premises of the cafe, it felt relatively surreal with its bunny-eared chairs and its diamond-like door knobs amidst a Tiffany-blue and white decored backdrop. 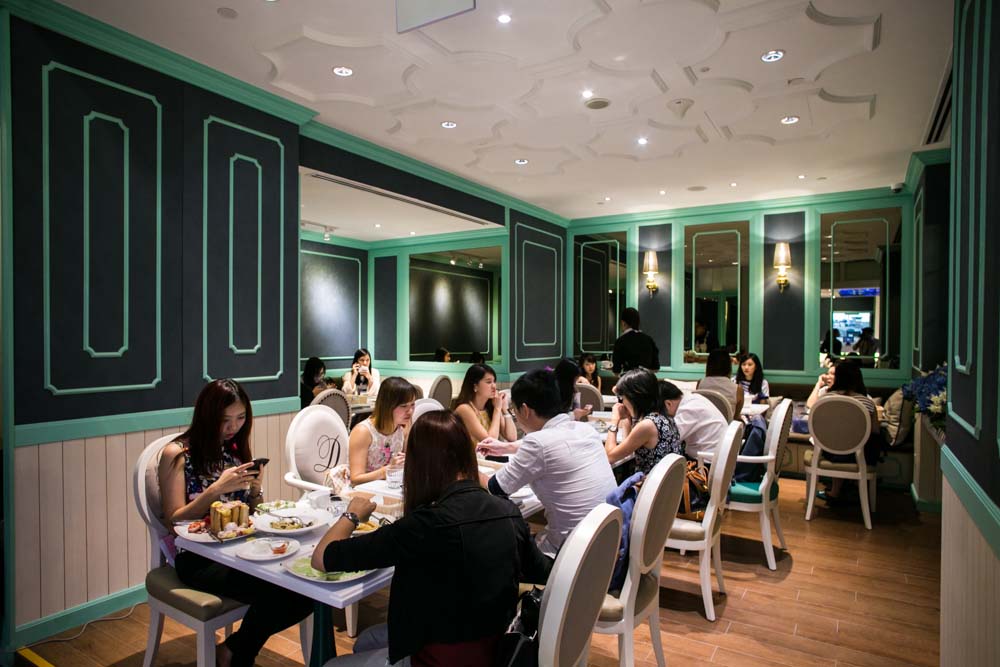 Having seen the meandering queues at the other Dazzling cafes in Taiwan, the Singapore outlet makes no exception; boasting a queue that started 4 hours prior to the first day of its soft launch. Diners should expect a queue for this but waiting time varies in accordance to when you make it to this café.

P.S. On my second visit here over lunch on a weekday I left my name and contact number and got a seat for four pax about an hour later. 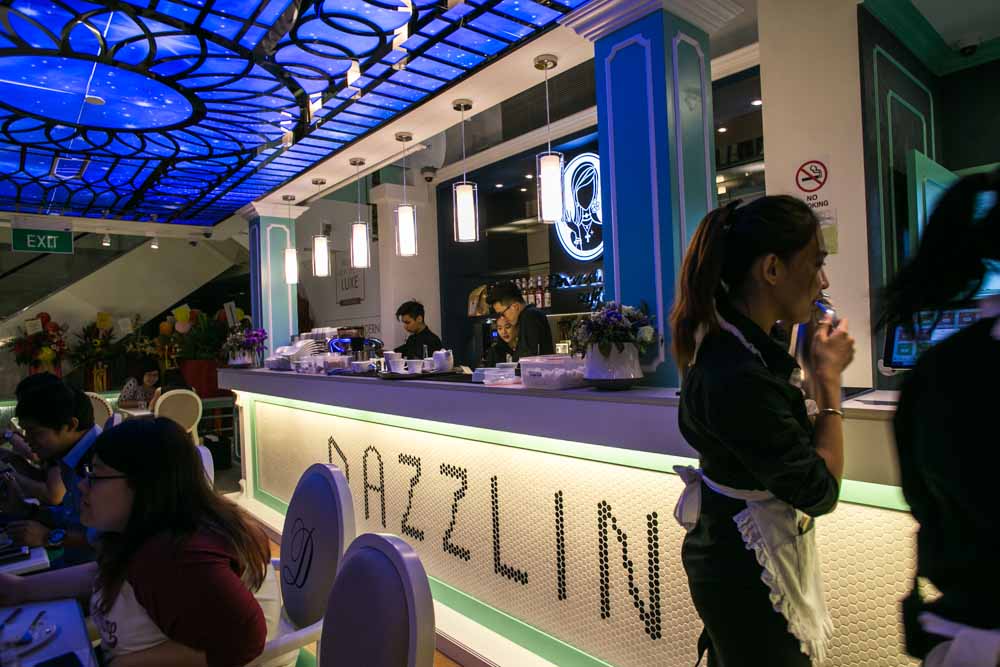 As we entered the café, we were avidly greeted by a waitress; donned in a french maid-like uniform, who quickly showed us to our seats. We walked by a number of tables which had variety of different dishes ranging from several interesting looking beverages, pastas and Shibuya Toasts. 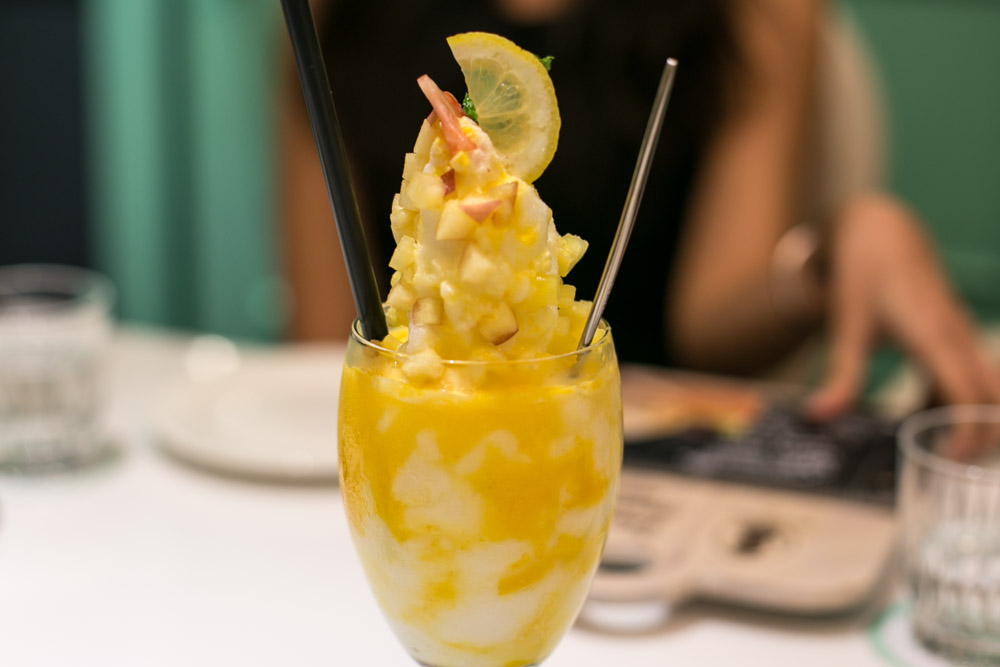 Carribean fruit punch with calpis sorbet ($8). One of the owner’s favorite drinks, it provides a tropical tangy finish in our hot weather. Sip it fast though as the fruit bits fall off the sorbet as it melts. Rose Latte with alcohol ($8). You can taste the milky baileys that blends smoothly with the coffee, and a hit of subtle rose syrup as you drink this beautiful latte. 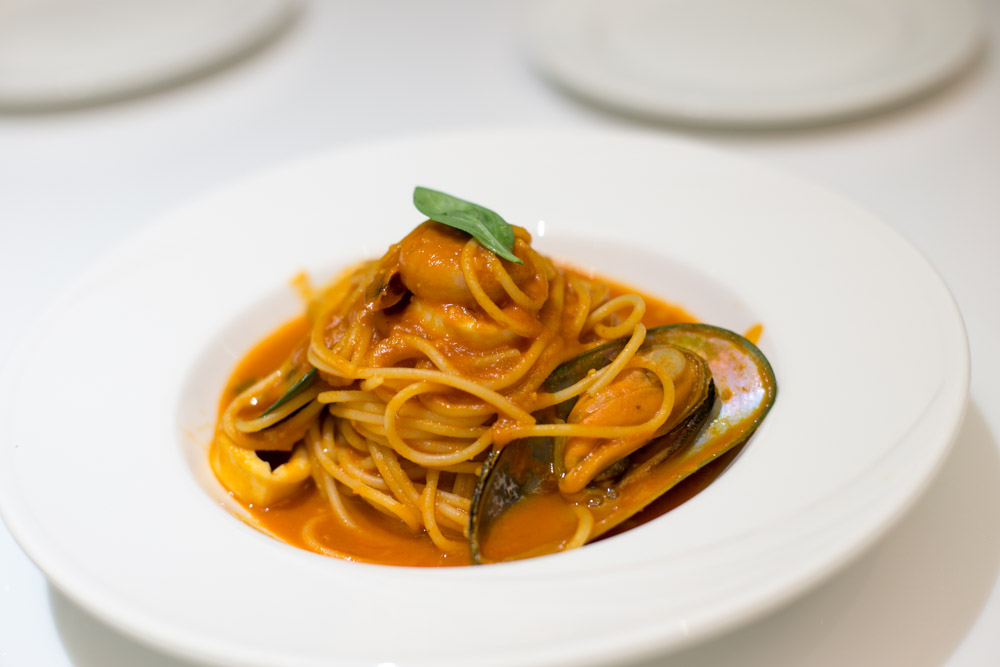 This Singapore exclusive pasta dish certainly had a unique flavour to it as it isn’t exactly common to have a combination of Tomyam and spaghetti. While it was quite interesting to have such a combination, I thought that the Tomyum flavour masked the taste of the mussels and the prawns which came with the pasta. 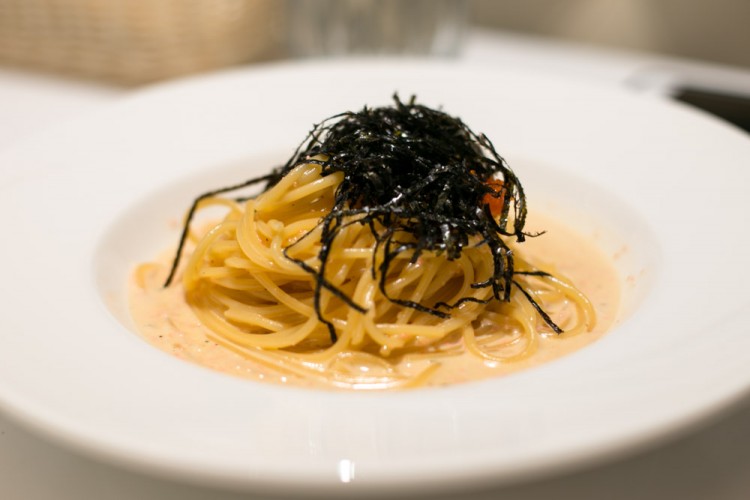 Mentaiko Spaghetti in Cream Sauce ($18.90). A simple dish that packs a punch of oceanic flavours, combined with cream sauce it might get a bit heavy. If you’re looking for something with a creamy base, both Mentaiko and Black Truffle Pastas do the job. It really does boil down to your personal preference; The mentaiko pasta was overflowing with fish roe goodness, while the black truffle was distinctly rich both in the flavour and smell of truffle as soon as it was served up. 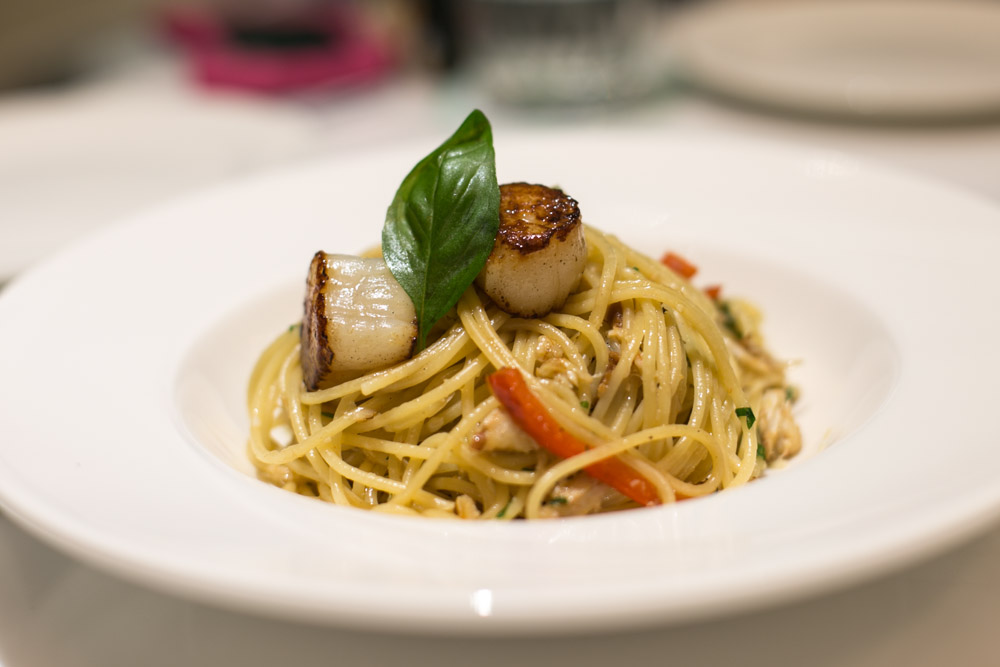 I found the aglio olio to be most refreshing after trying the other 3 heavier pastas. The texture of the spaghetti was al dente; firm with just about the right amount of olive oil, and served with scallops and a generous serving of crab meat.

Once the mains were out of the way, we were ready for desserts! Being an avid fan of almost anything sweet, I was looking forward to try a number of dazzling’s signature desserts which I’ve heard so much about. 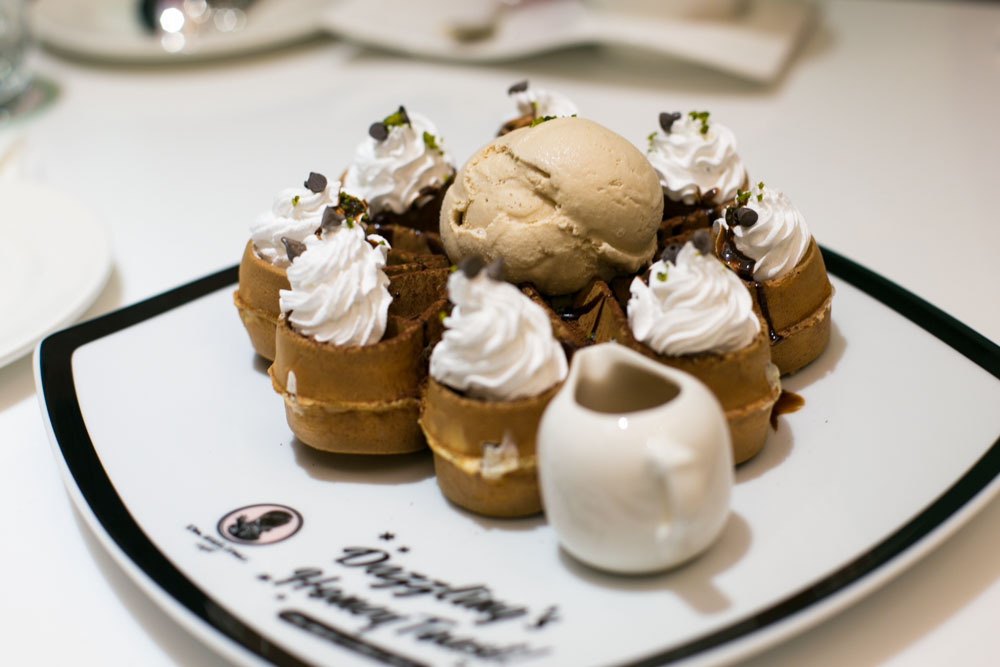 We started off with the mochi-stuffed waffles topped with a scoop of baileys-flavoured ice cream which I found to be a delight. The waffle was firm and crisp and had a soft yet chewy texture to it; it wasn’t too sweet and the Valrhona chocolate went really well with the ice cream making this a choice dessert for chocolate lovers.

The french toast here comes in both savoury and sweet options and are served at a ‘normal’ level of crisp. Diners who have other preferences have the choice to have their toast made softer or crispier. 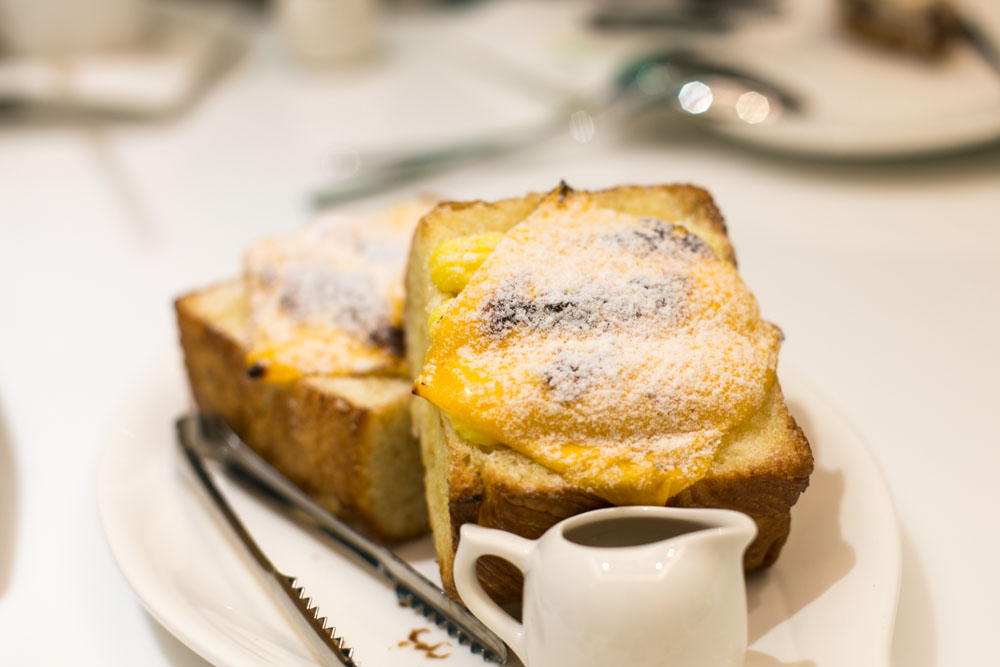 Less is more. I was pleasantly surprised at how the custard, melted cheese and buttery french toast combination worked out as it looked really simple and had exceeded my expectations in more ways than one. This is easily one of the best desserts on the menu and i would recommend that you try it. 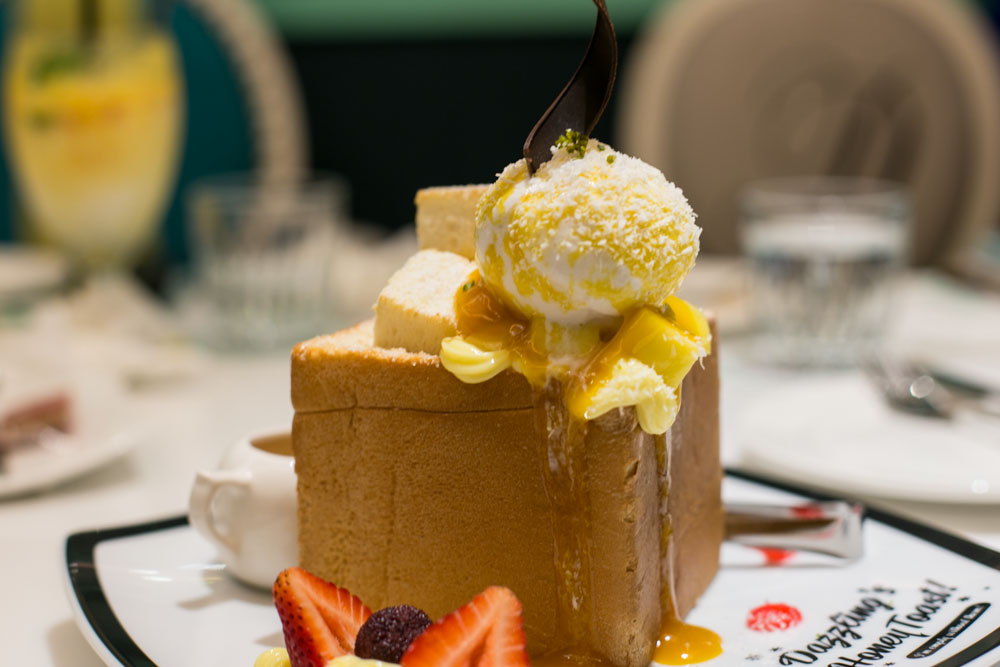 The combination of Mango and Coconut Gelato was quite good and would appeal largely to mango lovers. The only thing that i think it lacked was probably more ice cream/ mango syrup as it tends to get a tad dry with so much toast left. 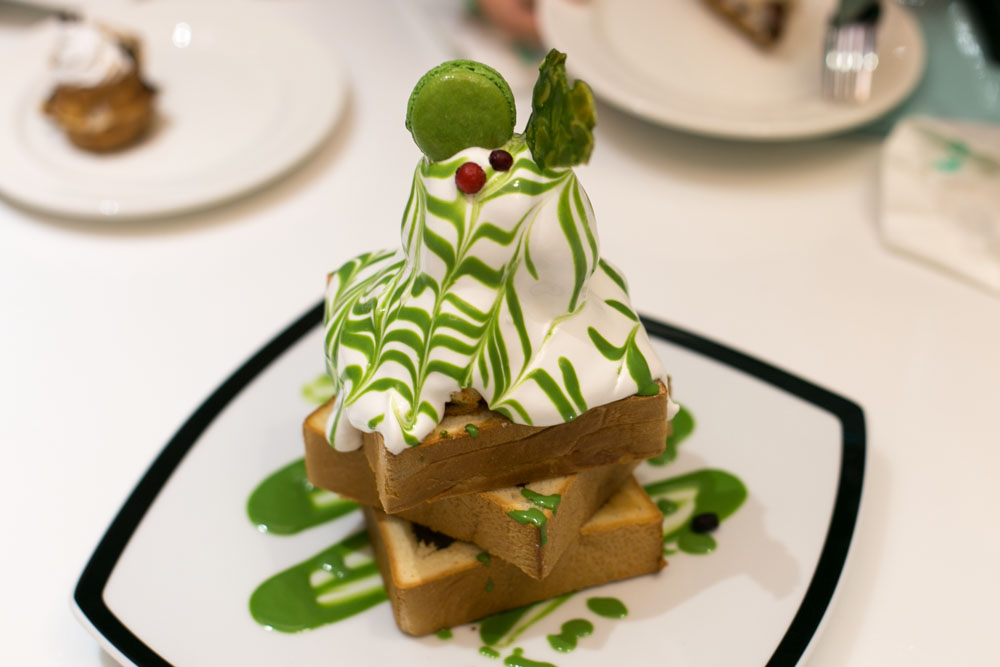 This probably makes one of the most popular choices here as it looks good and tastes good as well. I personally like anything with hints of green tea and found that the matcha flavour was not too overpowering or bitter. 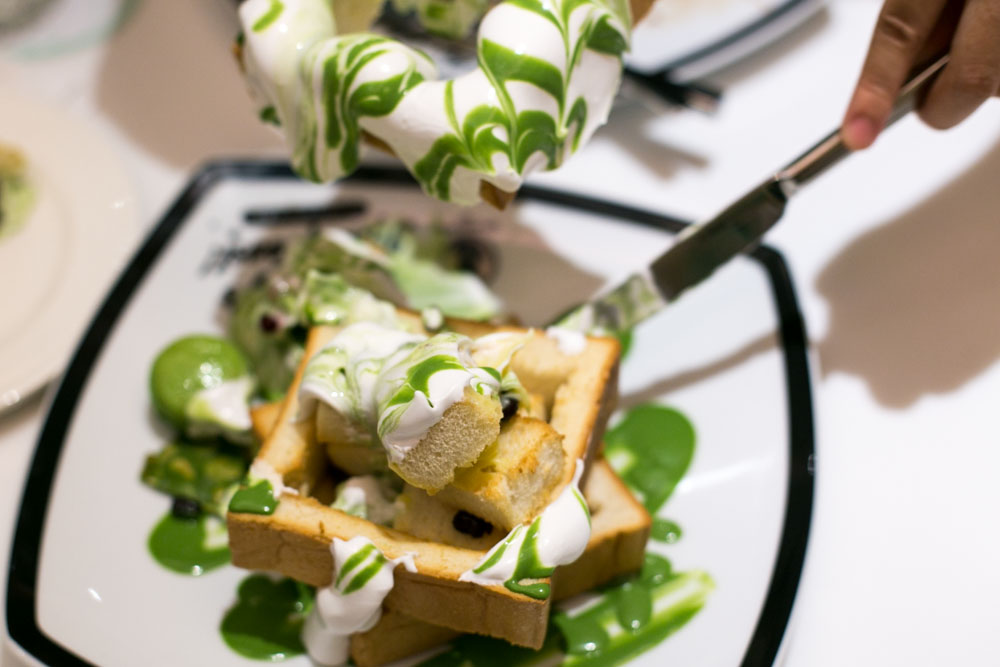 The servers cut up the toast for you upon serving. Customers also get to choose different degrees of how toasted your bread arrives in. I felt that the first Dazzling Cafe in Singapore is doing a pretty good job over its soft launch. Sure some dishes might need a little tweaking here and there but on the whole i thought it was actually the experience on the whole was quite nice. I would be back for their honey toast desserts for sure and  maybe give their mains another go after their official launch.

Shaun hardly ever sleeps and has a love/ hate relationship with his bed. You will find that he is constantly looking forward to the next gastronomical advent and often finds it hard to say no to a fine serving of steak, wine or whisky.