I’ll let you in on Tanjong Pagar’s newest secret but shhh, keep mum. The Tanjong Pagar district is quickly becoming Singapore’s go-to place for good food with countless cafes, bistros, bars and restaurants littered around this area. And with many new faces popping up sporadically at this already highly saturated area, what does it take to draw a sustainable crowd?

What I do know is how you can attract a new customer  and that’s simply by having – a catchy name. 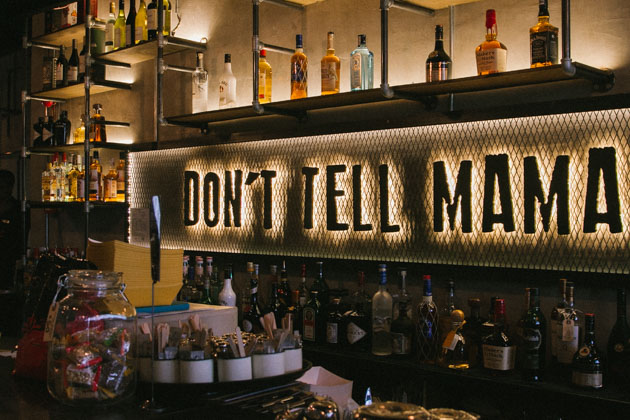 Upon seeing their name, my thought process went like: mmmmm interesting. What’s so bad or good that I wouldn’t want to tell my mom? A sex toy shop? Alcohol so good that I never want to leave this place ever bringing shame to my mother, dishonour to my family?

And boom that’s it. They just easily attracted a potential customer from their ingenious naming. And I’m pretty sure I’m not the only one who’d wanna check out a place just because the name was nice.

So Don’t Tell Mama scored flying colours in the name department but how did they fare in other more important areas like interior? 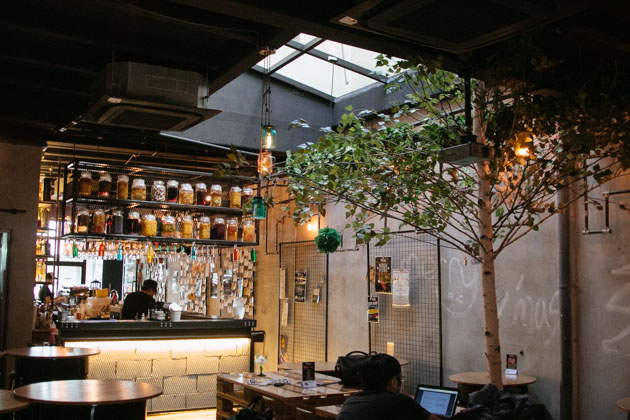 The interior of Don’t Tell Mama is just my kind of style. With visible pipes and lights doubling as display pieces and to using crates an cartons as tables and chairs, it exudes laid back modern industrial.

Yet they managed to add a touch of whimsical with the ceiling window streaming in natural light onto the indoor tree (indoor tree = +10 points) with paper lanterns and mason jar lights. I have this spot soft for modern industrial themed interiors and so this place tickles my fancy.

I can totally see myself here just hanging out with my friends playing beer pong, making use of their other drinking game toys and drinking promotions! But there’s definitely more to just drinking here don’t worry.

There’s more than meets the eye because Don’t Tell Mama…… isn’t Don’t Tell Mama in the day. It is the cafe DaBang by day, serving you coffee and all that cafe jazz but changes into Don’t Tell Mama – Korean Mexican Fusion Bistro by night. They’re right beside Chicken Up, their sister brand. 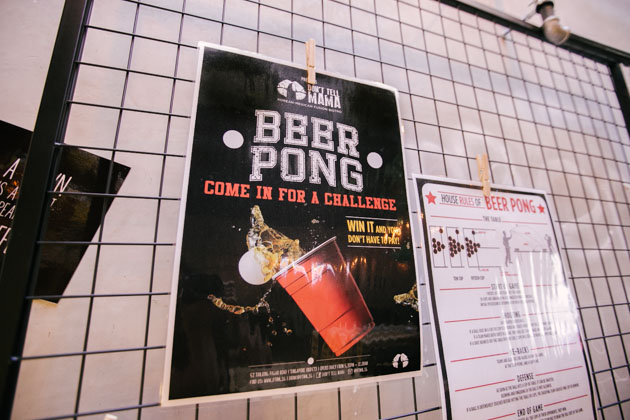 Don’t Tell Mama has a Beer Pong challenge where you can challenge another person/team to beer pong and the loser pays for beer. The manager mentions that beer pong happens probably once every night but sheepishly added it’s partly her own doing since she enjoys beer pong a lot. Other than Beer Pong, Don’t Tell Mama has a bunch of drinking games like drinking roulette and the pop-up pirate game. To fuel our cheeky alcoholic games, they offer various super valuable promotions like: In case you’re wondering what kind of cocktails you’re entitled to for the liquid buffet, their sweet fruity frozen cocktails e.g. Lime Margarita, Costarita (Blueberry Margarita), Summerita (Grapefruit Margarita), all usually price at $10, are the ones on unlimited refill with nachos at the side as complimentary bar bites.

This lychee margarita is one of the frozen cocktails available for liquid buffet. It was nothing fancy but at least you know they used real lychee since you can see some pulp residue in the ice.

A really interesting drink they offer is the Beerita, not included in the liquid buffet, where a bottle of beer is stuck into a flavoured margarite from the frozen cocktail list. The above Beerita is basically Beer + Pacharita which is their Passionfruit and Mango flavoured margarita.

The colour looks great but the taste of passionfruit and mango was too overshadowed by the Hite Beer. Basically, couldn’t really taste any of the fruits as it was all Hite beer. Perhaps other flavours would have been better since the Lychee Sojurita (shown below) tasted good.

This lychee beerita was good stuff. Sufficiently sweet and fruity, the soju did not seem to overpower the taste unlike the Beerita we had. Its refreshing and easy to drink so don’t be fooled by the sweetness because it packs a real kick.

I personally prefer the sojurita over beerita simply because I personally feel neutral soju mixes better with the fruity flavours unlike beer which just seems to conflict. 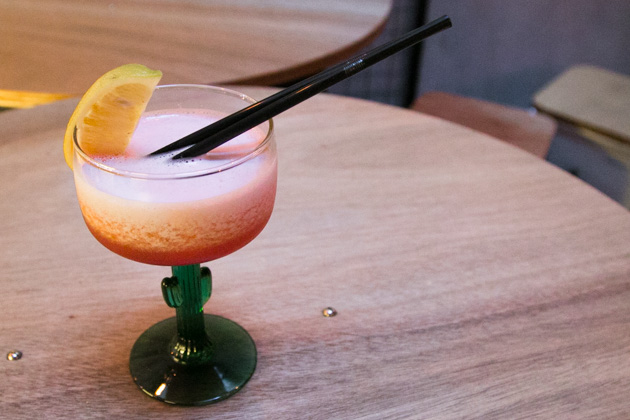 This next drink we had was called ‘Spicy Melon‘…… Yeah…. I had no idea what possessed Seth to order a drink called Spicy Melon even despite being told it was going to be really spicy. But then it just looks like innocuous watermelon juice right?

WRONG. One sip was all it took to make my throat feel violated by chili. It simply tasted like I was drinking Tabasco sauce. Not cool, not fun, 100/10 would not try again. But if you’re a fan of drinking chili sauce or are looking for that insane spicy noodle challenge in a cocktail then yeah…..go ahead!

After an amusing yet horrifying experience with the spicy melon, we decided to order another less threatening cocktail. This time, this cocktail happened to be my favourite of the night.

Although kinda pricey for such a small cup, the Espresso Zuzana was pretty damn delicious. It was made from Vodka, Kahlua and Espresso so basically like frappuccino with alcohol.

So this cocktail was great because the coffee flavour was rich enough despite being blended in ice, it was still robust and creamy with the alcoholic kick. The drink had great balance and it felt like it was something I could drink all day. Plus point, the bartender freshly grinds the coffee beans and brews the espresso upon your order.

Being an ice-blended drink, it’s better to consume it before the ice starts melting profusely and dilutes the whole beverage, just like how frappuccino left alone to melt sucks.

And on to the food.

Upon hearing bulgogi fries, I was very skeptical, like sweet grilled beef and fries..? Mmm sounds hella odd. But surprise surprise, it works!

Overall this flavour was creamy and good for sharing within 3 /4 people. It might be too stodgy for 1 or 2.

I thought the kimchi fries were just going to have kimchi powder sprinkled on it and not literally have kimchi lying atop the fries. Furthermore, they made their own kimchi mayo sauce so overall kimchi flavour is assured.

It was a novel dish with real kimchi and strings of pulled pork under the abstract pool of sauce, there was additional texture and crunch atypical of the usual cheesefries. Since kimchi is an appetising dish, the fries were not too nauseating to eat continuously.

The Bulgogi Quesadilla was like bulgogi wrapped in toasted crisp prata skin. In case you’re wondering how bulgogi tastes, think grilled marinated beef in this dark sweet and savoury sauce with a lot of sautéed onions. This dish was well executed with bulgogi done with authenticity and skin that is chewy yet crispy at some areas and really fragrant.

I actually liked it more without the sauces at the side.

The prawn burrito looks a lot like the organs of pizzas splayed out on a surgical tray. It looks nothing like a burrito so upon receiving it, we had to check back at the menu.

It really isn’t like a standard burrito but more of like a pizza-burrito hybrid. For people who enjoy the caustic piquancy of jalepenos and tabasco you’d probably enjoy this but it’s a bit too cutting for me. The cheese and caustic flavour blankets everything so you tend to forget you actually ordered a burrito… 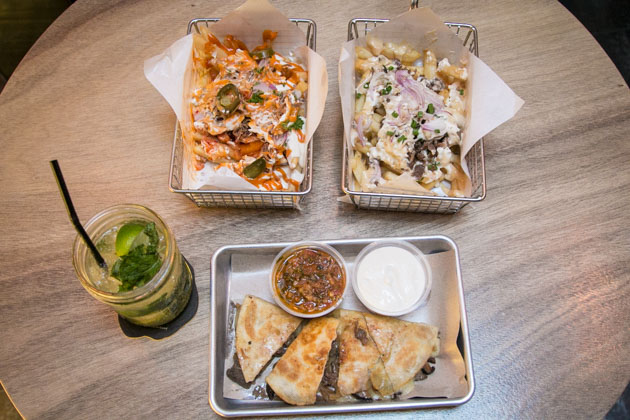 I can actually see myself coming back here again from drinks, some snacks (esp the fries) just to hang out, chill and have some fun with a small group of friends. It’s a pretty place with a laid back atmosphere and good food that’s pretty affordable so why the hell not?

So grab your friends to grab a beer or two at Don’t Tell Mama. Alcohol is really cheap here.