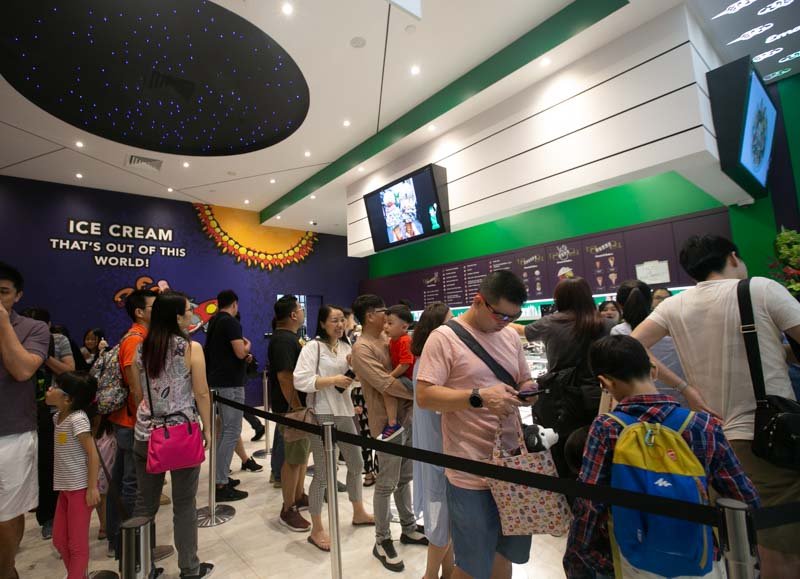 It appears that ice cream reviews can’t seem to escape the mention of our country’s sweltering weather as the reason for indulging in a cone. I agree they do make quick fixes but the weather alone isn’t the only reason why you should treat yourself to a pint or two from time to time.

Hailing from Boston, USA, Emack & Bolio’s is making their debut here in Singapore at our newly-opened Jewel Changi. 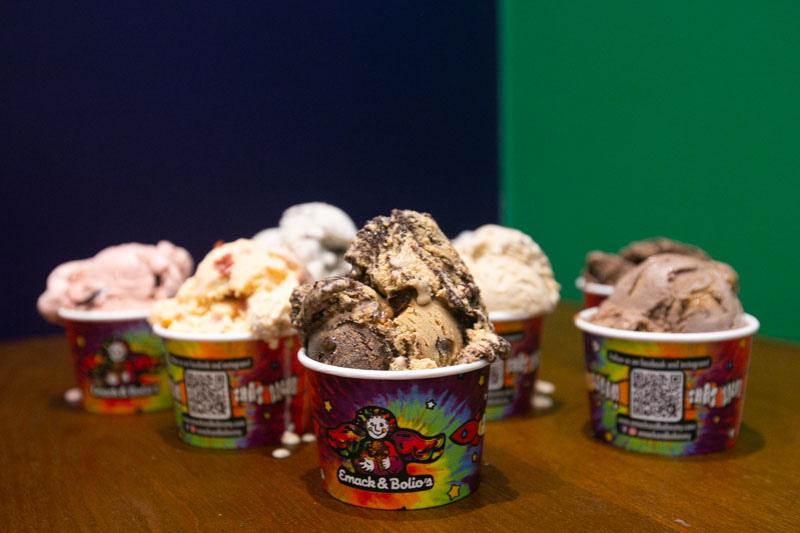 The smorgasbord of funky ice cream flavours will definitely leave you spoilt for choice, and considering the slightly steep price tag and snaking queue, you’ll probably not want to regret your choice of flavour.

We tried a couple of scoops, including Chocolate Addiction, S’moreo, Space Cake and Deep Purple Chip. Each scoop is priced from S$8, with additional prices according to the number of scoops and/or cones you choose! 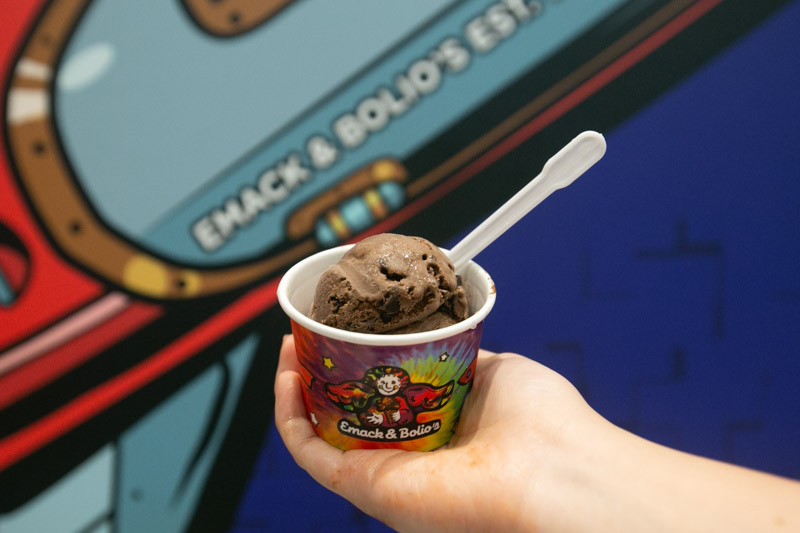 I’ve always been one to look at my friends disappointingly when they order an ordinary scoop of vanilla or chocolate at ice cream parlours. It’s not because I do not fancy the classics; it’s just that too few places do justice to these seemingly simple flavours.

But with a reputable name like Emack & Bolio’s, I knew that I had to try their Serious Chocolate Addiction (S$8 per single scoop).

The flavour was allegedly birthed from the creator’s “serious chocolate addiction”, hence the name. Each scoop had a copious amount of fudge chocolate and chocolate flakes.

I would liken this flavour to the Sticky Chewy Chocolate ice cream some of us may be familiar with. It was rich and dense, but not too overwhelming. Chocolate connoisseurs will agree that it was a scoop worth indulging in. 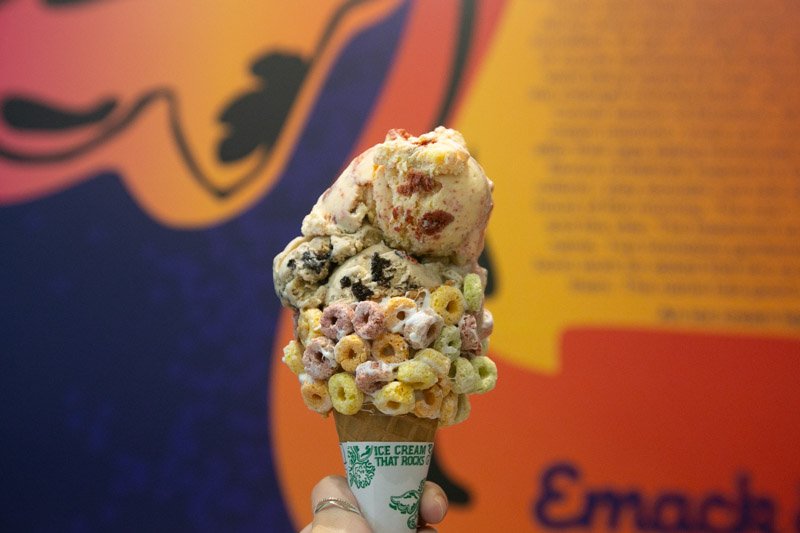 S’moreo (S$8 per single scoop) was my personal favourite out of the flavours we tried. We had it stacked on one of Emack & Bolio’s signature cone, the Fruit Loops (S$3 per marshmallow cone).

Chunks of Oreos replace the graham crackers traditionally used as the base for s’mores and are churned with a vanilla ice cream base together with marshmallows and chocolate. 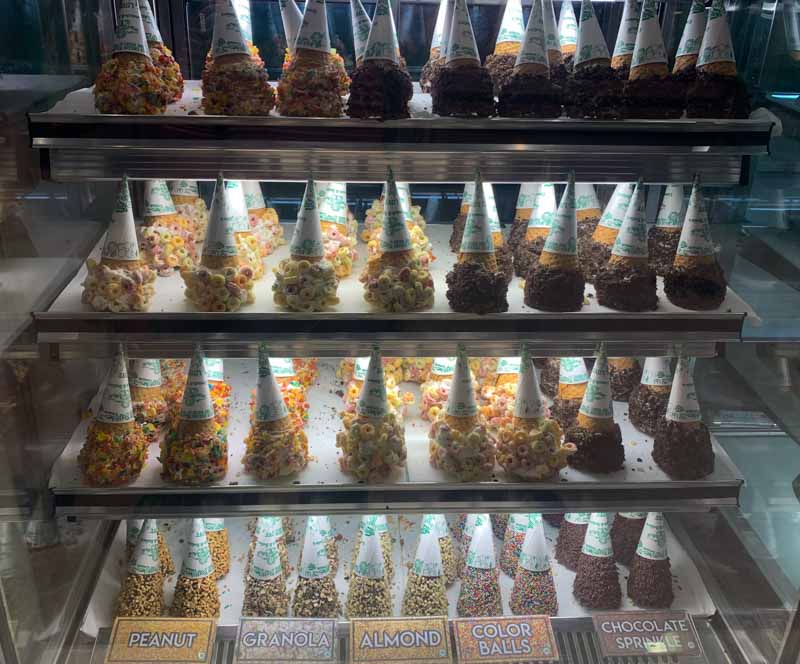 Their other marshmallow cones like Crushed Oreos, Fruity Pebbles and Rice Crispies all have the same price tag.

Alternatively, you could opt for their chocolate cones which are slightly cheaper, including their Peanut, Granola and Chocolate Sprinkle, all priced at S$2.50. 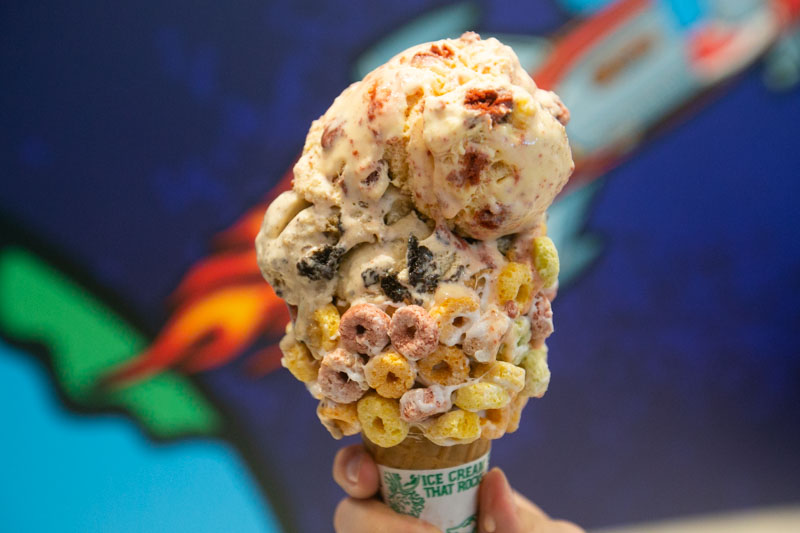 Birthday cakes have been made into a flavour for a while now, with many enjoying the unexplainable comfort of mere vanilla and flour batter churned into ice cream. Putting a spin to it, their Space Cake (S$8), we were told, was a crowd favourite internationally.

The cake batter ice cream had shortbread cookie pieces embedded within and chunks of red velvet cake, which looked vaguely like strawberry cheesecake.

I wouldn’t say it was out of this world, but could understand why so many love it. It was essentially two desserts in a single scoop!

The shortbread gave some parts of the ice cream a crumbly texture which I was not really a fan of, preferring to have smoother and creamier mouthfuls. Though not cloying, it was a little too sweet for me too. 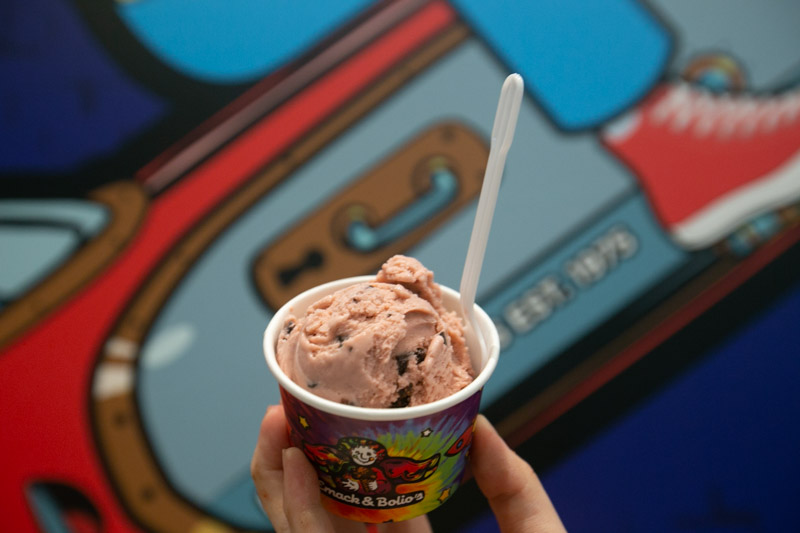 Emack & Bolio’s have been teasing us with their outrageously colourful cones on Instagram even before their opening at Jewel Changi. We went for their Deep Purple Chip (S$8 per single scoop), which turned out a little less purple than promised.

I took that as a positive sign, considering how vibrantly coloured foods are usually associated with being artificially pigmented.

The black raspberry ice cream base was less sweet than expected and was studded with white and dark chocolate chips.

Though sweet, there was still a slight tang from the berry. Their addition of white chocolate made each mouthful milkier, almost like the infallible pairing of pannacotta and a raspberry coulis.

Emack & Bolio’s boasts an extensive series of over a hundred different unique ice cream flavours across the world, though we’re currently only getting about 35 of them at Jewel Changi.

As a cynic who often sneers at mainstream food trends (rainbow food, salted egg, etc.), I wouldn’t give this a pass on account that I felt we were paying for more than the mere novelty or hype of the ice cream.

Their tagline ‘ice cream for the connoisseur’ is more than a mere lick and a promise. It’s true to say that they do produce head-turning ice cream that tastes as good as they look.