Ever find yourself craving for an affordable all-you-can-eat Korean BBQ or army stew? Look no further as Eonni Korean BBQ is here to leave you wanting more. Located at Bedok North Avenue 2, the sister stall (and neighbour) of Noona Korean Kitchen, serves authentic Korean BBQ and army stew at a fairly decent price. Do not be fooled when you get there as there is one coffee shop at each end of the stretch. My advice is to follow the aromatics of freshly-made prata and curry as this coffee shop sells it. Once you reach, you may be confused as the stall’s brightly-lit signboard says “Noona Korean BBQ” however, as mentioned above, they are both under the same ownership.

What I tried at Eonni Korean BBQ I arrived a little after 4pm and noticed I was in time for the Buffet Teatime (S$15.90 for Adults, S$9.90 for Children under 12 years old). There’s also a 120-minute dining time, which I decided to make full use of. Upon first glance, I noticed that all their meat, seafood and vegetables were neatly organised in various containers in front of the stall, which is perfect for their self-service feature. Additionally, you’d get unlimited rice, noodles, tteokbokki, and banchan! Since I was having both the K-BBQ and Army Stew, I decided to be strategic in my choice of meat and seafood.

While Estelle, one of the five owners of the stall, helped us set up the gas grill with a hotplate and portable stove for the army stew, my colleagues (Rachel and Aaron) and I proceeded to choose our meat and seafood. Also, bear in mind that all their meat is marinated with their special homemade marination (recipes taught by their Korean chef friend). Talk about dedication! For the army stew, we got the Meatballs, Luncheon Meat, Scallops, and Tteokbokki. There were more ingredients like fresh seafood, but we didn’t want to get more than our tummies could handle.

We also decided to add an additional portion of Free-flow Egg (S$3) and Cheese (S$3).

Obviously, the Thick Cut Pork Belly had to go on the grill first as it was the chunkiest and took a long time to cook. While we waited for the Thick Cut Pork Belly to cook, we got started on the stew and spicy meat options. We also had a separate grill for the spicy meat to cook along with the Free-flow Egg and Cheese. I’d like to add that the Cheese used here is beyond amazing, especially when paired with the charred meat (and everything else)! It was my first Army Stew experience and personally, I’m quite disappointed it took me this long to try it! According to Aaron, the Army Stew here is not as diluted as the ones he’s had at a couple of establishments (that’s a big win for Eonni). As we patiently waited for the pork belly to get smoked to perfection, we went on to grill the Chicken, Pork and Beef Bulgogi. Let me just share with you how well-marinated and tender the meat here is. Absolutely flawless, and each bite was a treat.

Estelle also shared that their Bulgogi meats undergo two days of marination. I was floored. For their Banchan, they offer a range of everything. Think kimchi, pickled radish, homemade potato salad, burdock, sweet and crispy anchovies, and more! We also took a bowl of lettuce to create our own version of Ssambap. Once the pork belly was done, we had a truly divine experience. Grilling the pork belly for as long as we did, resulted in melt-in-your-mouth meat paired with sweet caramelised charred bits, finished with an incredibly smoky aftertaste. It tasted so good, that I was reluctant to have a sip of my drink to wash the flavours away. We also got the Seafood Pancake (S$10) from Noona’s Korean Kitchen to try their a la carte dishes. The thin, omelette-looking pancake was loaded with an abundance of prawns and squid. When paired with the sesame sauce, it exploded with salty and sweet notes!

Never would I imagine enjoying a meal as good as the one I had at Eonni, especially in a coffee shop setting. Not only were they incredibly well-organised, but I could also see their hard work reflected in the fresh meat, homemade marination, and clean appliances. Like most places that charge for food wastage, however at Eonni, they charge S$5 per 100gm, and all proceeds go to the Home Nursing Foundation (where the owners volunteer too).

I can’t wait to return and try more of their mouth-watering a la carte menu dishes! 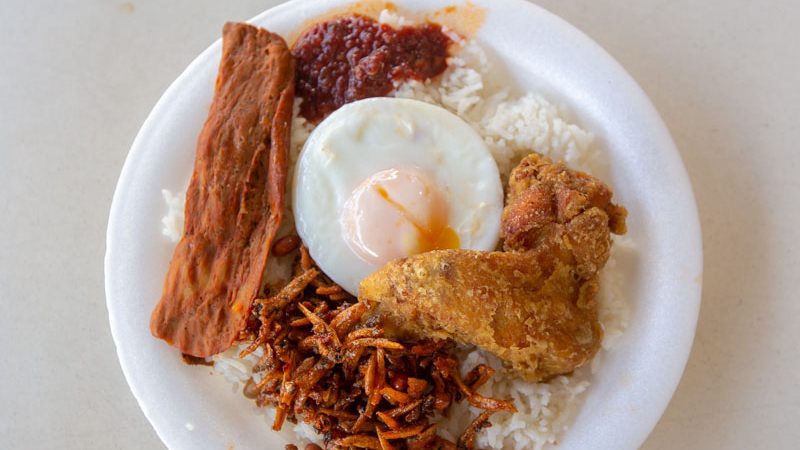