The one thing that stood out when I look back at my schooling days was the food. Fried food days with golden chicken cutlets for astoundingly cheap prices, pan-fried fishes with its dubious brown sauce, and piping hot bowls of mee rebus on rainy days…

Trying Fatty Bom Bom Sizzle felt like I was back in school again, and in a good way. Located at Toa Payoh, this nostalgic old-school hawker stall served Western dishes in remarkably large portions, and most dishes were priced affordably below S$10. 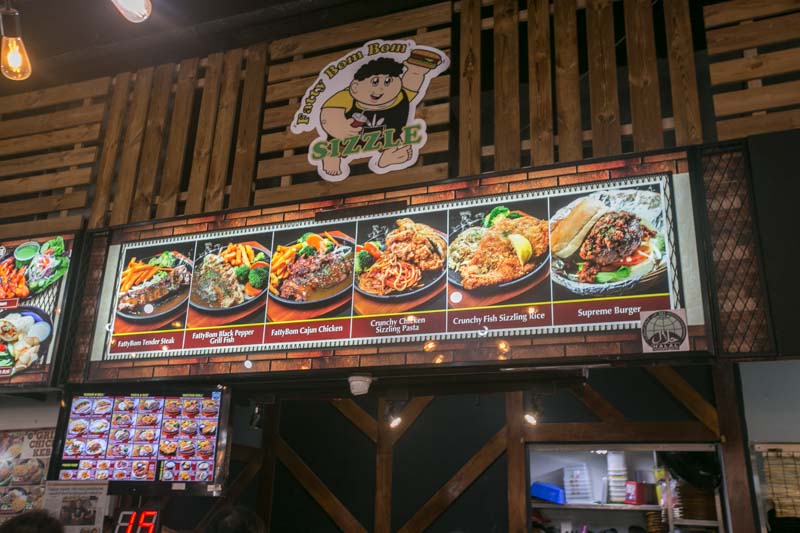 Fatty Bom Bom Sizzle is halal-certified and has a total of four outlets across Singapore in Toa Payoh, Woodlands, Bukit Batok, and Toh Guan. 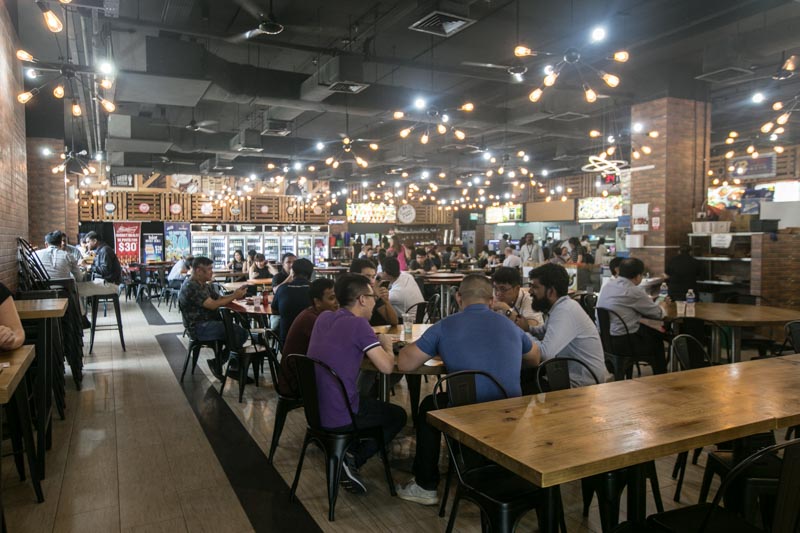 We visited the Toa Payoh outlet, which was located inside Grains & Hops Food Court Bistro. It’s a second-floor food court that’s air-conditioned with an indie vibe, thanks to hanging warm and white lights, wooden tables, and metallic black chairs.

If you head towards the drinks stall, you’ll even find a wall lined with fridges of bottled beer from varying brands, great for relaxing with friends after a long day at work. 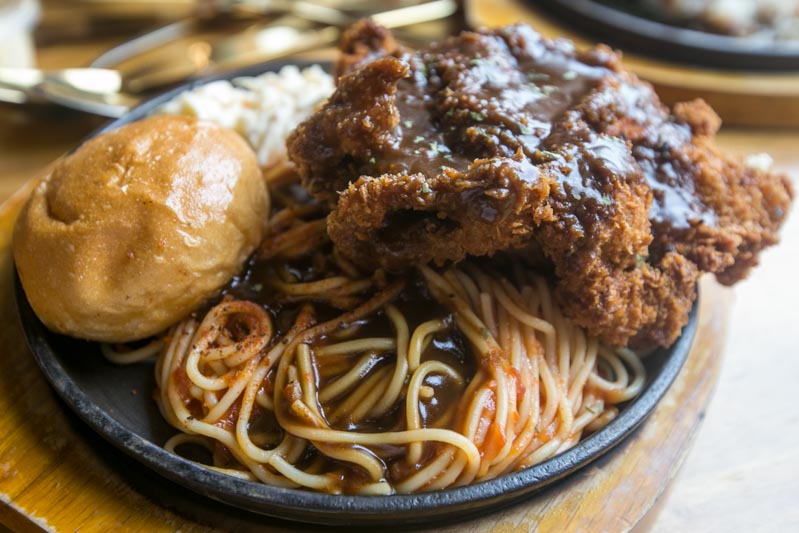 The first dish that immediately caught my eye was the Crunchy Chicken Sizzling Pasta (S$7.20). It came in such a large portion that the humongous fried chicken couldn’t even fit within the hot plate. The one thing I loved about this dish was how crispy the golden fried chicken was. There was that glorious crackling sound when I cut into the fried chicken. It was also deliciously salty, with a nice peppery kick at the end from paprika.

However, being served in large chunks like that had its setbacks. Depending on which part of the fried chicken you cut into, it could’ve been tender and moist or tough and stringy. I even had trouble cutting into some parts of the fried chicken because there was too much tendon and it was too leathery and dry.

It was also a challenge to eat the fried chicken while it was still crispy simply because it was too huge. It came drenched in a brown mushroom sauce and sat on top a mountain of pasta with tomato sauce. This made the fried batter become soggy quickly, like fries left out a little too long. While the pasta noodles were cooked al dente, the tomato sauce itself is pretty nondescript. The tomato sauce was diluted and tasted like it had been poured on separately, rather than being tossed together with the pasta.

For that price and portion, I reckon you’re better off ordering plain white rice and eating it with the savoury mushroom brown sauce.

Then again, everything about the Crunchy Chicken Sizzling Pasta reminded me of school food. The hero of the dish was definitely the crunchy fried chicken, which came in sinfully large portions. It wasn’t too fantastic on the whole, but it was just flavourful enough to get by. 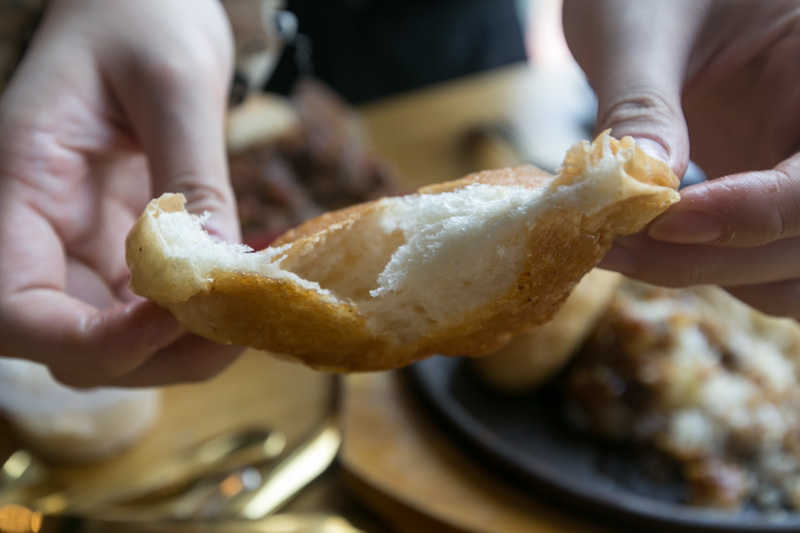 What Fatty Bom Bom Sizzle did absolutely right was its fluffy buns. It was soft and buttery, and picking it up with our fingers left a visible indent on the delicate bun’s surface.

Despite having left it on our plates for a good five minutes or so, the buns were still emitting steam when we tore into them. The bread was fluffy, milky and buttery, just the way old-school bakeries do it.

These buns were fantastic on its own and needed no sauce or gravy. 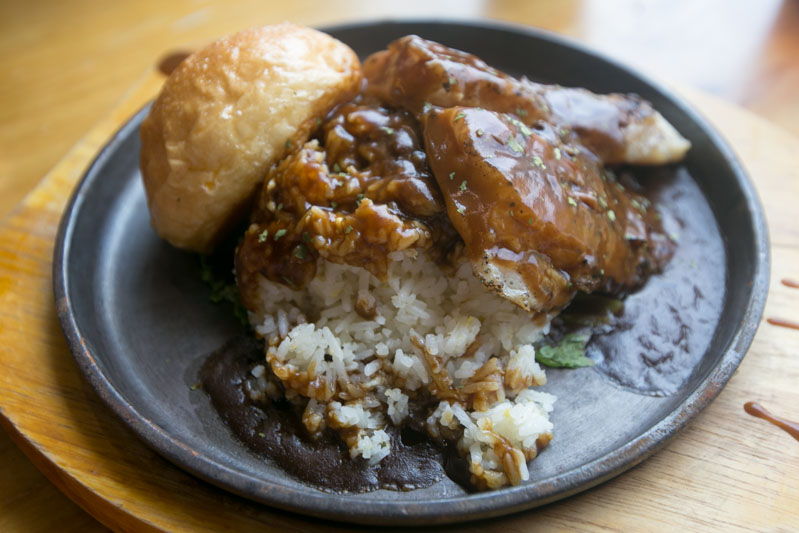 Another dish that brought me right back to my schooling days was the Grill Fish Sizzling Rice (Cajun Spice) (S$6.90).

The grilled fish came in a neat fillet and was piled on a generous mound of white rice. This dish also came with a fluffy bun. 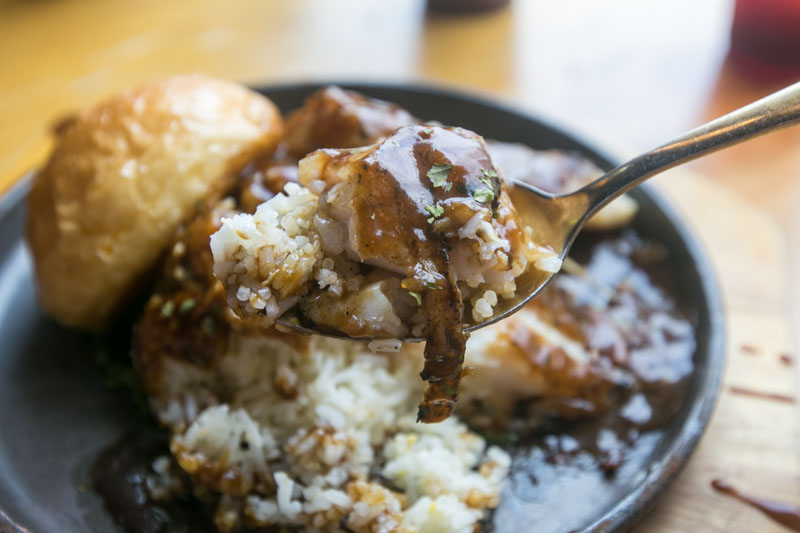 The fish was soft and came apart easily, with a nice crust on the outside from having been grilled.

I couldn’t taste the cajun spices at all and the dubious thick brown sauce tasted faintly like a mushroom-based gravy. Flavour-wise, this dish definitely strayed far from the mark and could’ve used more seasoning for sure.

However, it was oddly satisfying and indulgent, and we couldn’t stop ourselves from eating spoonfuls of the garlic white rice with the suspicious-looking mushroom-based gravy 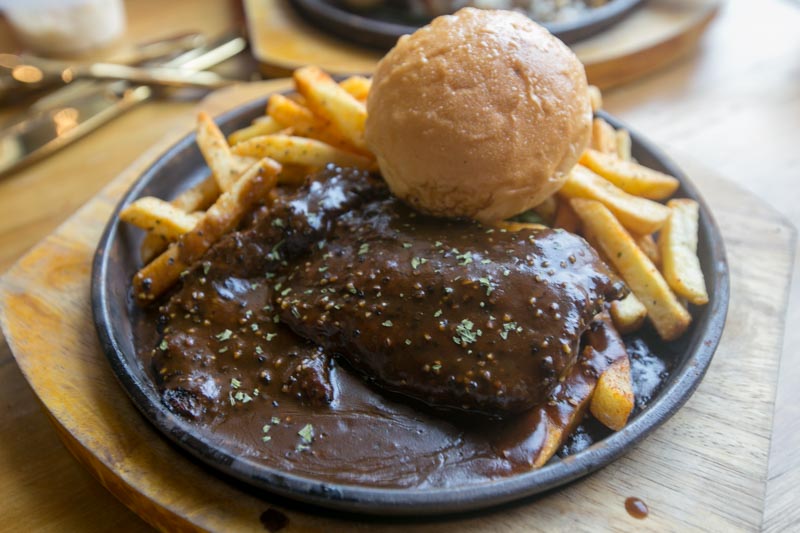 To me, what sets the benchmark for a Western food court stall is its steak, so the FattyBom Tender Steak (S$10) was a must-try for me.

It came drenched in a peppery dark sauce, a generous serving of cajun fries, and a bun. 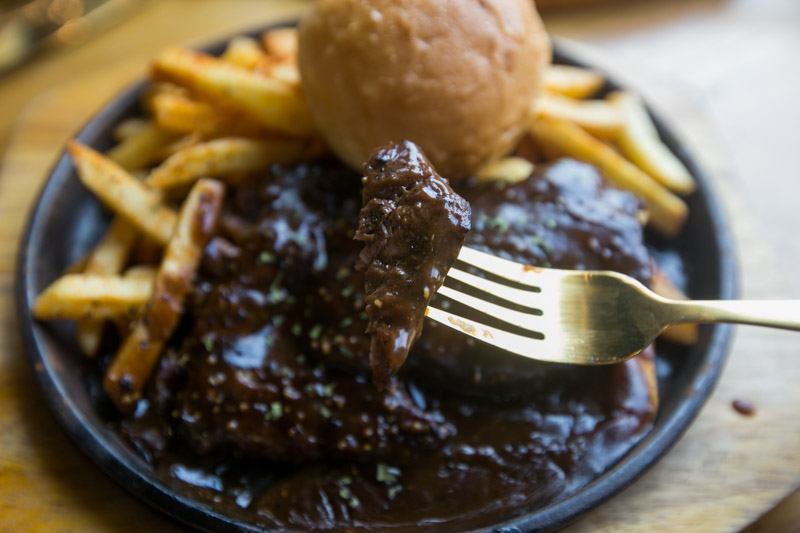 If you’re looking for a melt-in-your-mouth piece of tender beef with a little pink rareness, you’re not going to get it here.

The meat was slathered with so much black pepper sauce that I couldn’t even tell what colour the meat was. But based on the fact that the servers didn’t even ask for my preferred doneness and that my jaw was aching from the amount of chewing I was doing, I’d guess that it was served well done.

The sauce was actually quite delicious. It was piquant and mildly spicy, and I could taste actual black pepper granules in the gravy. 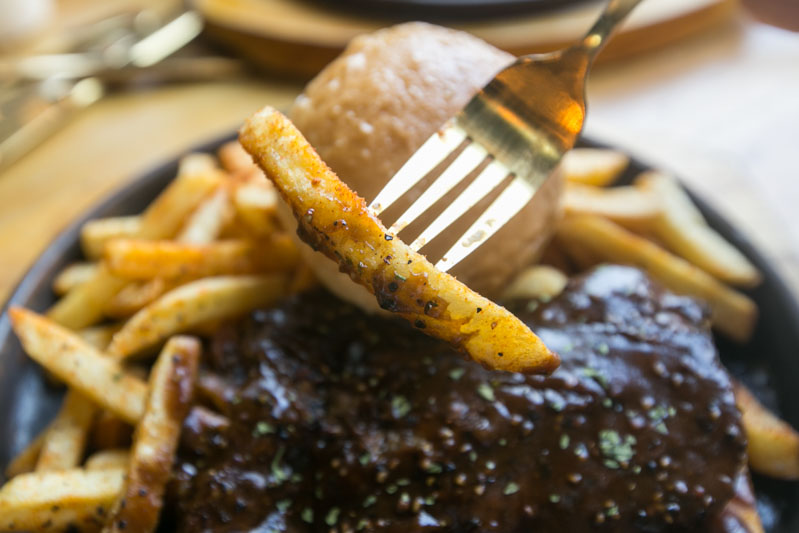 The fries were of a decent size, neither too scrawny or too fat, and were tossed with a good amount of cayenne pepper.

Each bite was peppery and spicy, but because the cajun seasoning was merely powder, I found myself dipping the fries in the black pepper gravy for some moisture. The Supreme Burger (S$10.80) is the only dish above S$10. It came with a thick handmade beef patty and cajun fries. Copious amounts of tomato sauce & coleslaw were slathered between the two soft buns. 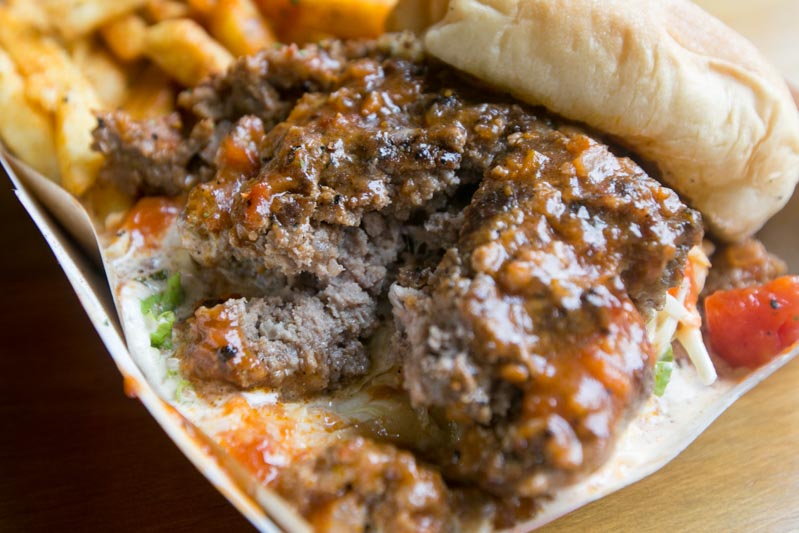 Fair warning: because of the amount of gravy, sauce and juice from the patty, tomato sauce and mayonnaise from the coleslaw, there’s no way you can eat this burger cleanly with two hands. I had to eat it like a deconstructed burger, with a fork and knife.

Though the addition of tomato and coleslaw within the burger was slightly odd and confused my tastebuds quite a bit, the beef patty was very nicely done. Thick and juicy, the meat was savoury, smoky and springy.

To me, this was a really comforting meal. While the dishes were hit or miss, all of them were all oddly satisfying and nostalgic in that old-school tuckshop sense. The portions at Fatty Bom Bom Sizzle are huge and the dishes are all priced affordably too.