It all started with one drunken night shared between three friends in the Thai city known as Bangkok. Needing a late-night fix, Darryl Lim, Edmund Low and Liang Wei Zhe decided to indulge in plates of ba mee.

Not one of them knew, however, that this experience would change their lives in a drastic fashion. Thoroughly impressed with their humble meal, the three friends decided that their experience had to be shared – brought back to Singapore, even. This was the conception of Fatty Thai, a kopitiam stall along Beach Road that is an ode to the trio’s deep love for Thai-style wanton noodles.

Set in a rugged, old and rather run-down kopitiam, Fatty Thai aims to mimic the experience one gets in Thailand when eating the humble street food. Evidently, Darryl and his pals had every little detail thought out – surely a testament to their laudable commitment to bring authentic, delicious ba mee to Singapore. Available for $4 or $5, the Ba Mee Kiao Moo Dang appears unassuming and deceivingly simple. Lacking the intense colours that mark regular wanton mee, one might get the impression that these noodles taste bland. Yet, that simply couldn’t be further from the truth. 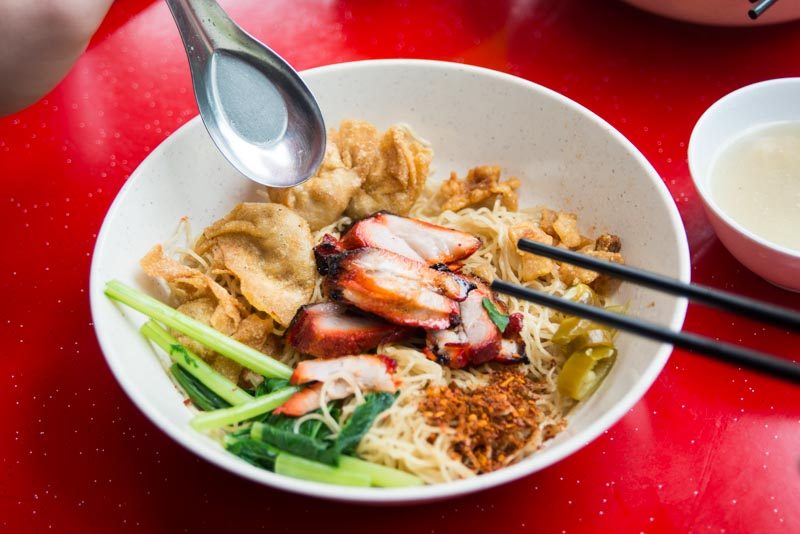 Keeping their recipe top secret, the only nugget of information I managed to squeeze out from Darryl was that the noodles are tossed in a lard oil-based mixture.

Completely unlike the usual mixture of dark sauce, sesame oil and even ketchup that you might find in traditional wanton mee, these noodles rely on a lighter mixture to provide an arguably more intense flavour. The lard oil made the noodles fragrant with a savoury, tangy flavour permeating the noodles. Sharp and incredibly aromatic, this made for a truly addictive bowl of noodles.

Texture-wise, the noodles were firm to the bite yet springy, thus providing a very pleasant mouthfeel. 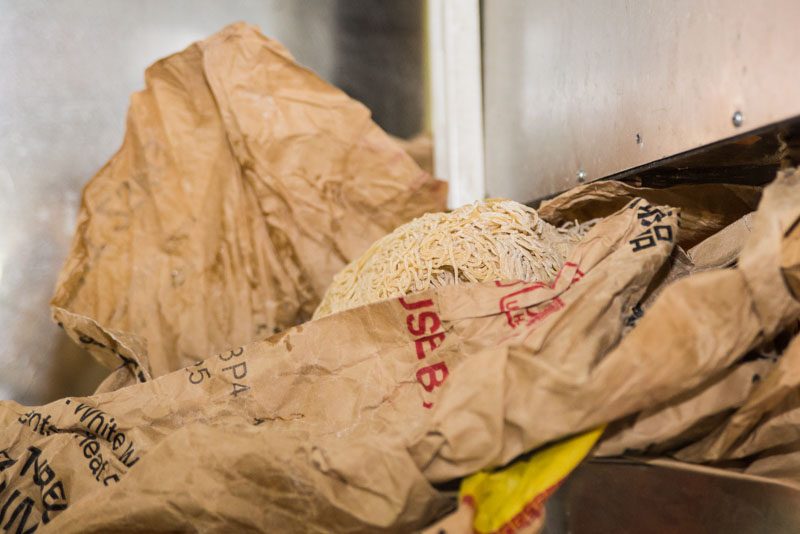 With wanton noodles, there sometimes arises the problem of an unpleasant floury aftertaste that effectively mars an otherwise delicious meal.

Fatty Thai’s wanton mee, however, carries none of that appetite-killing flavour, thanks to a careful treatment process. 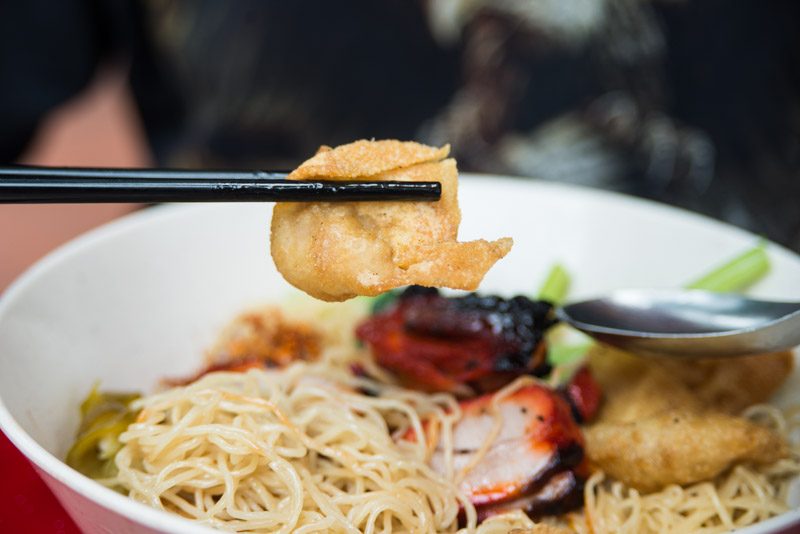 Of course, the greatness of a bowl of wanton mee cannot solely be judged by the quality of the noodles. The wanton itself is also crucial. My $5 version came with three pieces of deep-fried wantons, and two pieces of wantons in the soup. 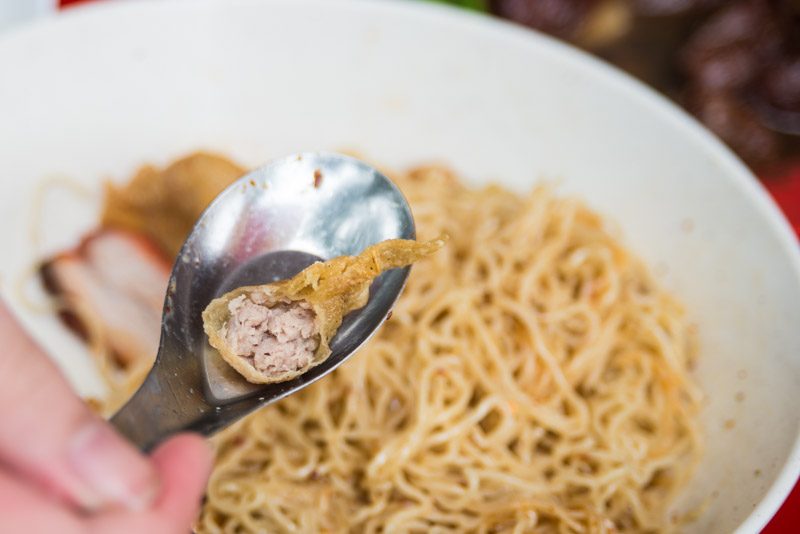 The fried wantons were delicately crisp, with well-seasoned meat enveloped within. Unlike some low-quality wantons that tend to have dried out meat, this minced meat remained succulent and juicy.

The meat-to-wanton ratio was also ideal, with the wanton being neither too floury nor meaty. 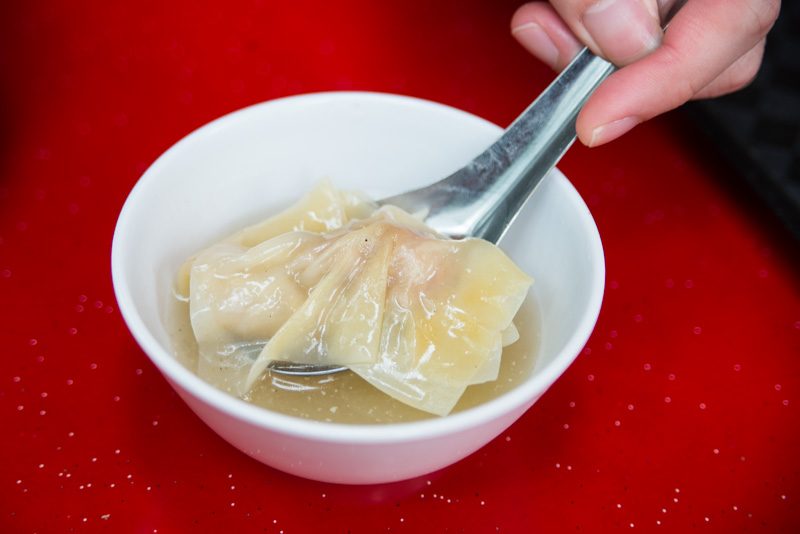 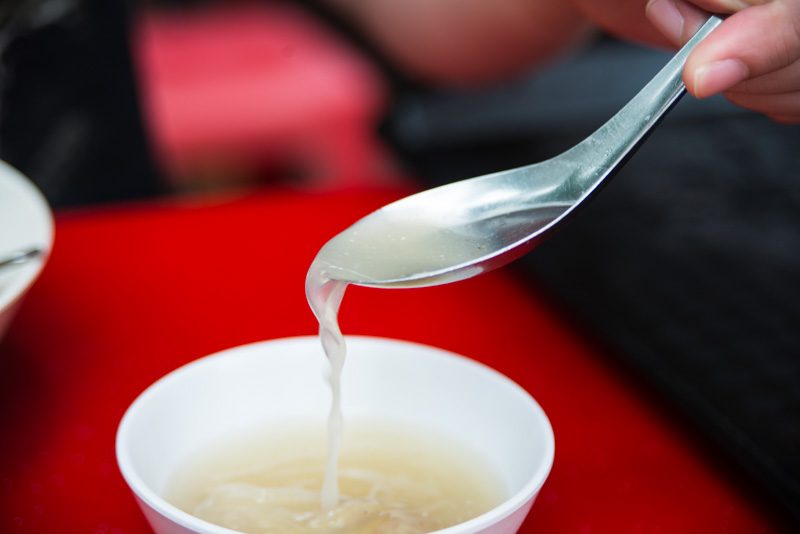 As for the boiled wantons, I was quite impressed with how smooth the wanton skin was. Soaked in a flavourful soup, the wantons absorbed some of its flavours, giving them a delightful peppery tang. 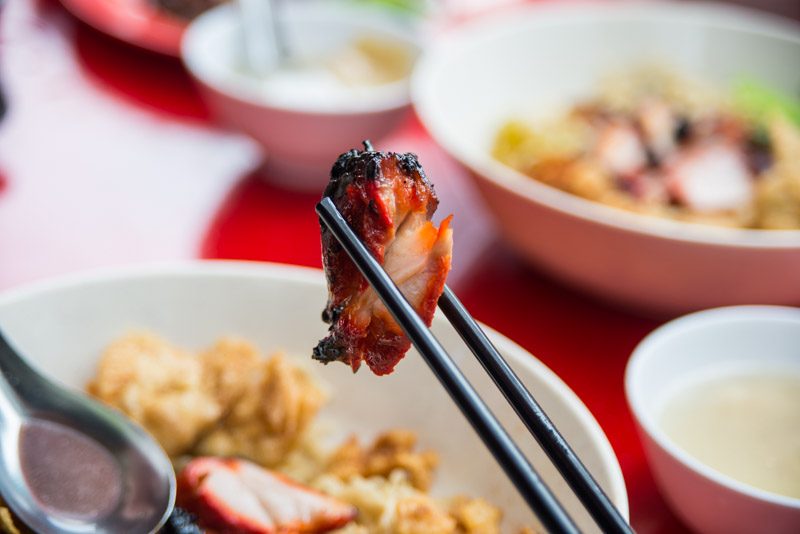 Ah, we have finally come to what some might consider the star of the show – char siew. I must warn you, if you haven’t already realised, that this bowl of wanton mee is nothing short of a calorie bomb. Fatty Thai’s char siew is made with pork belly that features layers of glorious, glistening fat.

Braised slowly over multiple hours, the thick slices of char siew were succulent, with the layers of fat providing a good amount of moisture and flavour. I especially loved the crispy char on the surface of the meat, because it infused a smoky fragrance that sort of reminded me of the burnt bits that you can find on bak kwa. 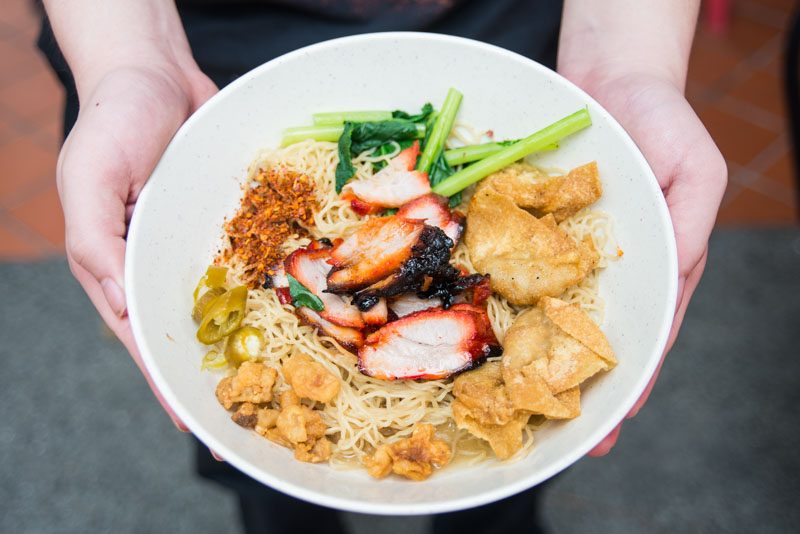 Oh, and as if this bowl of noodles wasn’t unhealthy enough, it is also served with a generous portion of deep-fried lard.

Crisp and oozing with flavour, these were fun to pop into my mouth, though each bite I took felt like I had taken a direct blow to my very heart. 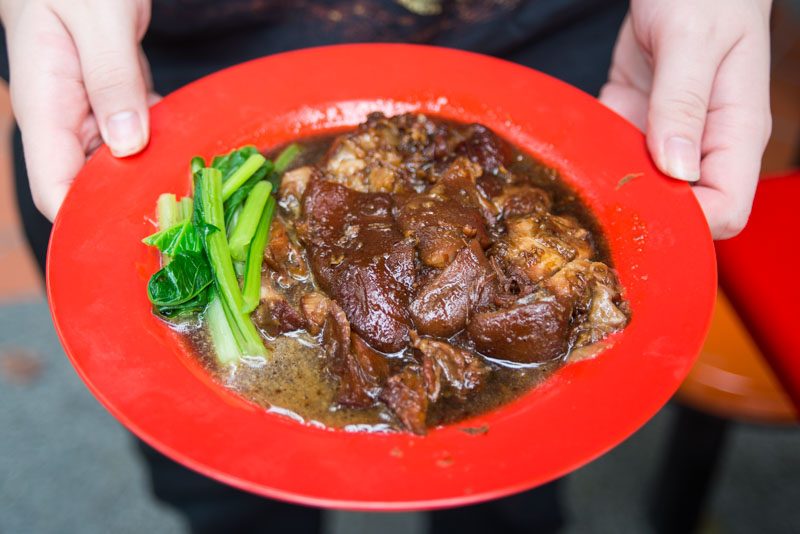 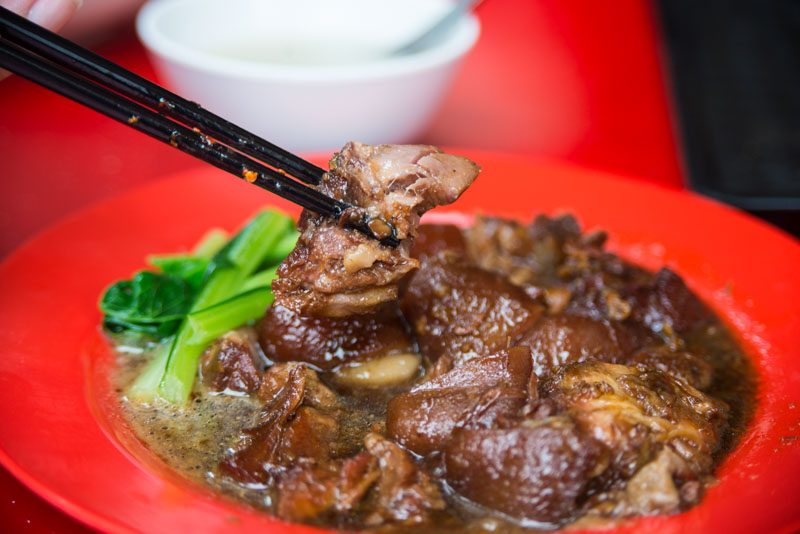 Besides wanton mee, Fatty Thai also serves up some sinfully delicious pig trotters, Khao Ka Moo. Priced at $5 or $7, you can get a decently portioned plate of pig trotters.

The incredibly tender fat disintegrated in my mouth, oozing out the sweet fragrance of the braising sauce. While not melt-in-your-mouth tender, the meat itself was sufficiently succulent, carrying a robust, highly addictive flavour. 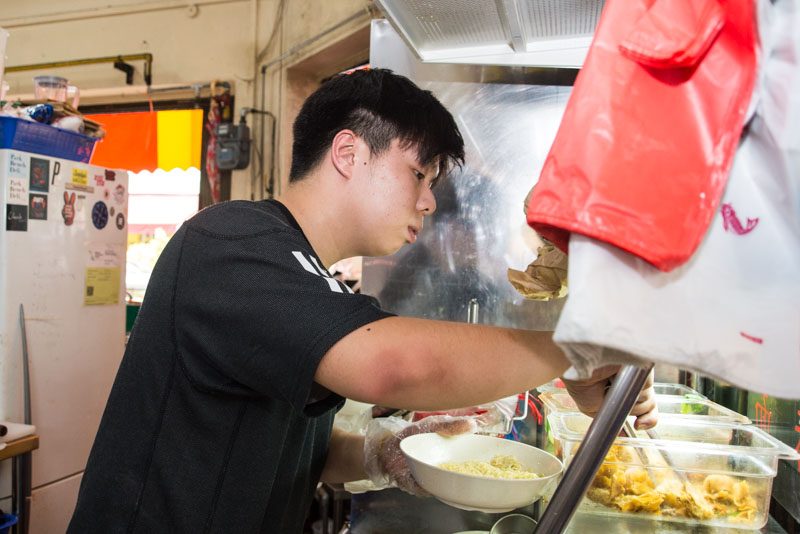 Though I’m not the biggest fan of wanton mee, Fatty Thai has completely mesmerised me with their scrumptious Thai-style wanton mee. At Fatty Thai, there’s no doubt you’ll get a very fattening meal, but you have my word that every calorie is well worth it.

After all, the three owners named their stall Fatty Thai after their own (according to them) chunky physiques.